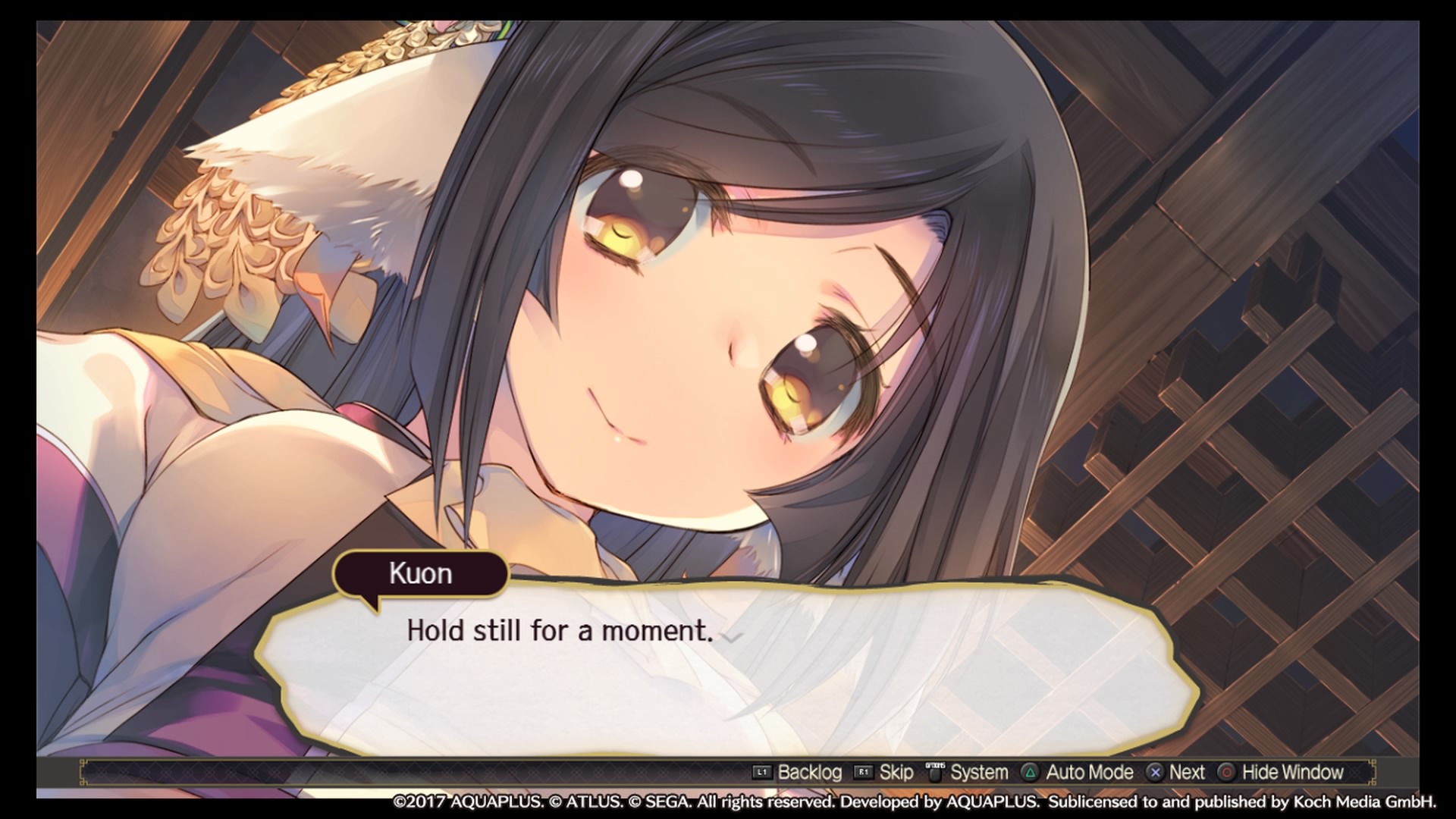 Utawarerumono: Mask of Deception has released on the PS4 and Vita and boasts a visual novel game with strategy RPG elements. Can it please both sets of fans?

Utawareromono was actually released back in 2002 on the PC in Japan. It was an adult visual novel. Mask of Deception is a sequel and there is another title due to release later in the year titled Mask of Truth. 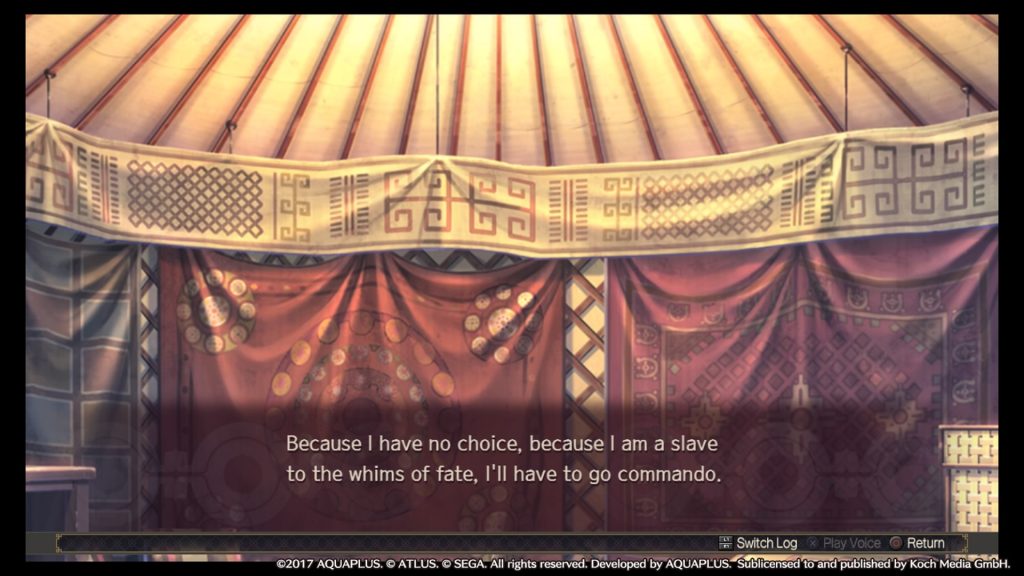 You play as a male who wakes up in a snowy landscape in a medical gown and suffering from amnesia (always with the amnesia). Freezing to death things go from bad to worse as he’s attacked by a giant, unrecognisable creature. Luckily he is saved by a female stranger, with cat ears and a tail, and the game follows their adventure, moving to new locations and meeting new teammates.

The story is very slow moving. That’s not to say it’s not enjoyable, but you will be pressing the cross button a lot as the characters muck about and do little to progress the story. Thankfully those characters are actually very likeable which is something I don’t get to say too often. There are some cliched ones but generally they all add something to the party dynamic and there are some legitimately amusing scenes.

Every line is voice acted, but only in Japanese, and seem really well done. You have the option of turning off the voice work for the protagonist (so you can be him, I guess) but in general the writing is well done, conveying each character and describing the scene. Apart from a decent amount of background art, each character has a few poses their 2D portraits cycle through as they talk but there is no animation to speak of. The art style is nice and the few unique illustrations are very attractive. 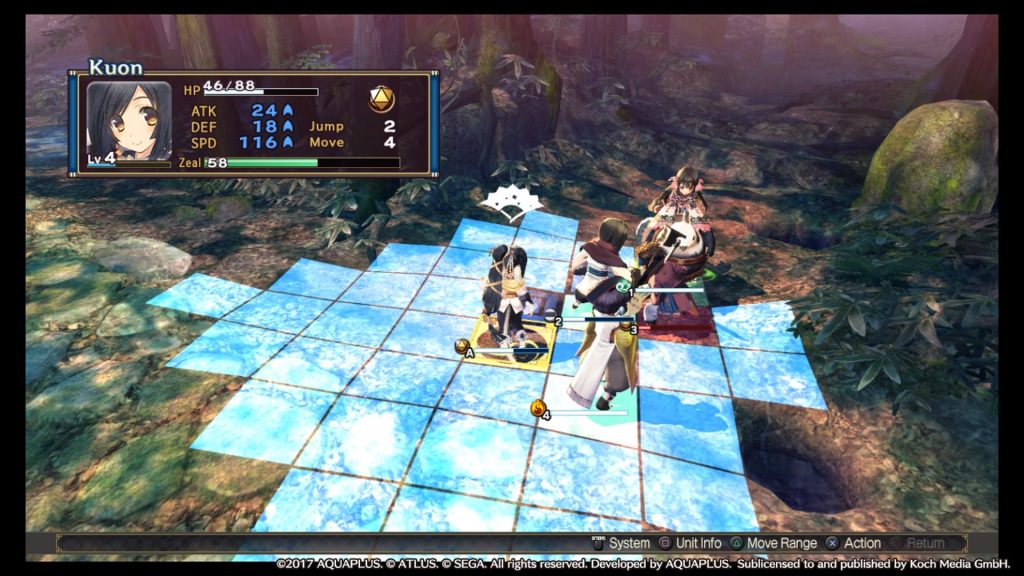 It hasn’t completely lost its adult game roots in the transition to console either and you’ll probably see the most they could get away with as far as nude anime girls go. The Witcher 3 this ain’t, with all the naughtiest bits cleverly hidden by objects and perspective but if you’re put off by every female at some point having a (very well drawn) relatively saucy illustration then this won’t be the game for you.

There is more than just reading though, as there is a full strategy RPG system in here. There are some interesting additions, like the ability to press the cross button upon a hit to perform a critical attack and a zeal metre that fills as you perform actions that grants extra buffs when full. The graphics change to fully 3D environments and models but, maybe thanks to the Vita version, the graphics aren’t going to trouble your PS4.

You position your characters to take advantage of their weapon range, can use various abilities and level up after each action and at the end of a fight. During fights if you make a mistake you can actually rewind up to fifty moves which is a nice touch and allows you to experiment with tactics with little worry of punishment. You can even replay fights, on normal or hard difficulty, to grind out experience if you so choose. 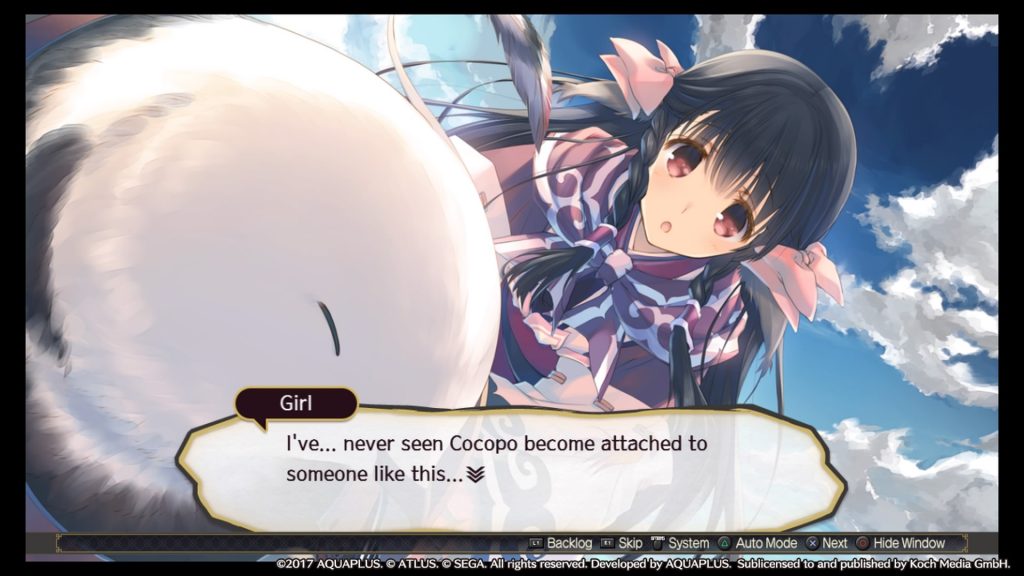 Unfortunately these fights are few and far between. You’re probably looking at two hours, maybe sometimes more, of reading between fights. If you go in expecting a visual novel primarily then you’ll probably be okay with the fights just acting as a palette cleanser every now and then, but I could have done with the story moving a bit quicker and so hitting these battles more often. They happen so infrequently and are simple enough as to make them feel unimportant with little joy from levelling as you’ll forget whatever skill you just learned by the time the next fight comes around.

So this is definitely primarily a visual novel and it’s a decent one. You have your main story scenes which, eventually, will lead to a fight but you also have moments where you can choose which location to move to next. All this does is choose which character focused scene you see next, and it seems you have to see them all before you progress so it’s not really a choice, but as side stories for each character they are usually quite fun and do let you get to know those characters a little better. 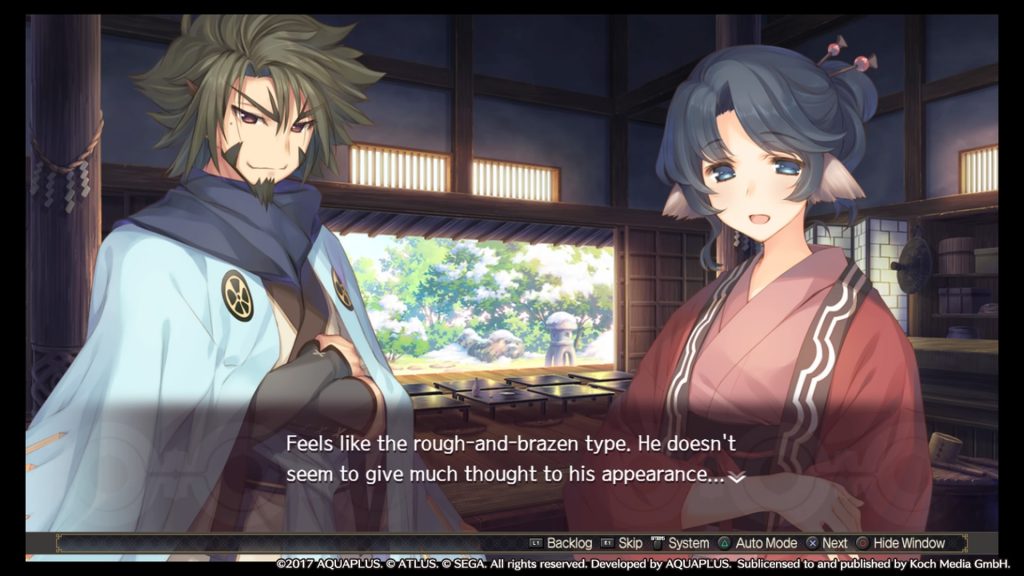 Utawareromono: Mask of Deception is a very long game too so if you’re looking for value for money then this should deliver assuming you enjoy the core concept. I personally, as much as I liked the characters, found the pacing to be a little on the slow slide with little in the way of story hooks to keep me invested. A game you dip in and out of would probably suit this best and, although I’ve not played that version, probably suits the Vita very well. Marathoning it for review probably accentuated the negatives but if you’re a fan of this genre then I can see plenty of people getting joy from this title.

Utawarerumono: Mask of Deception
6 Overall
Pros
+ Likeable characters
+ Strategy battles are fun when they turn up
+ A lot of content
Cons
- Story is very slow
- Battles are few and far between
- Nudey scenes might not be to everyone's tastes
Summary
Utawarerumono: Mask of Deception is a visual novel first and foremost, with some strategy RPG battles scattered throughout. The story is pretty slow going, with the battles few and far between, but the characters are very likeable and contribute to some amusing scenes. One for fans of the genre.