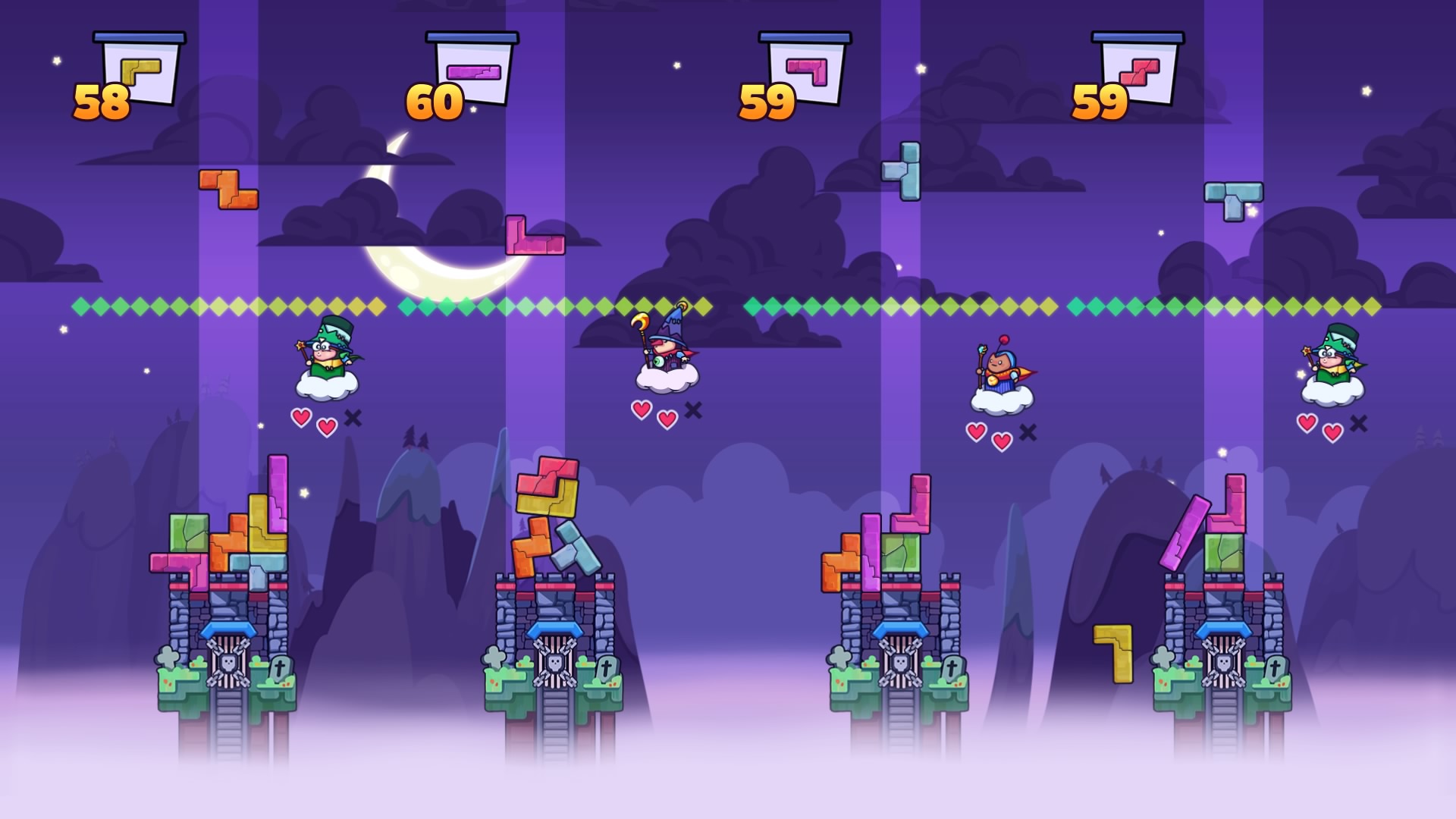 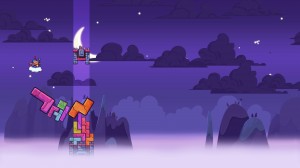 Each month PlayStation fans eagerly await the next bunch of PS+ freebies. They speculate wildly, somehow expecting that it’ll be some full retail release from a month ago and then, without fail, are gutted when it turns out to be some indie game that looks like it belongs on an iPhone.

This month we got Tricky Towers and it is far from being a full retail game. Just look at those screenshots. I get it, you didn’t buy a PS4 to play a cartoony version of Tetris. As such, I imagine a lot of people won’t even bother downloading this and that’s a shame, because Tricky Towers is decent.

To explain what it is, I have to put down the elephant in the room. This isn’t a Tetris clone. Sure, it uses tetromino pieces, the usual collection of four-piece blocks that you’re used to. But you don’t complete lines here and no blocks are taken away. Instead this is a game about stacking pieces.

Starting from a solid base, your aim is generally to stack the falling pieces as high as possible. What makes this tricky, and makes Tricky Towers great, is the fact that the blocks are affected by physics and gravity. The weight of the blocks has to be considered. The best way to explain it is, imagine the line shaped tetramino (four blocks in a straight line). If you were putting that onto another block, it’d need at least 50% of it to be resting on the block below or else it will just topple off. 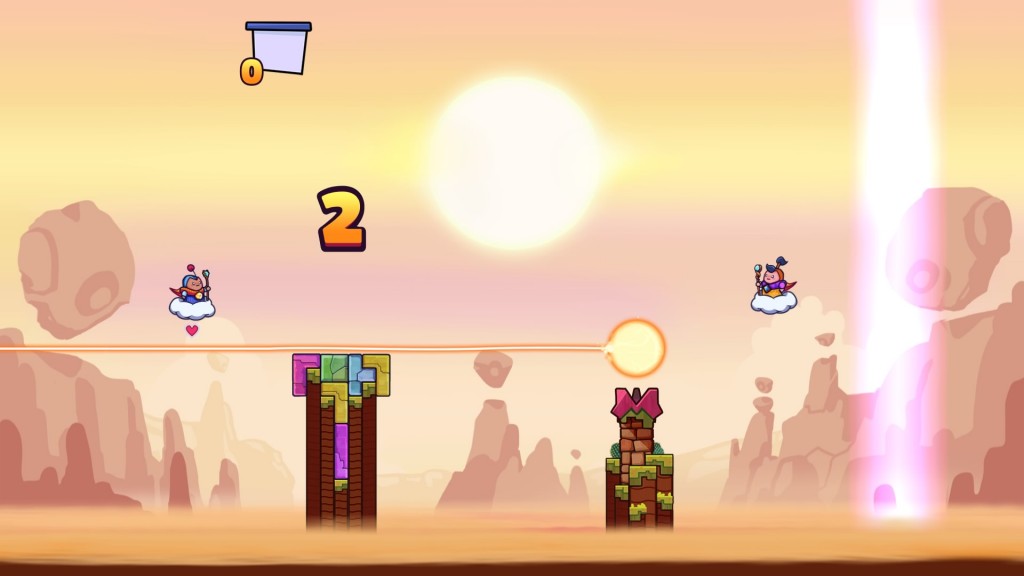 So, instead of rushing to get as high as possible, you really need to build firm, interlocking foundations. It becomes, no pun intended, a balancing act. When to stack versus when to solidify.  It’s a clever game mechanic and really elevates the game beyond the usual slew of Tetris rip-offs we’ve seen over the years.

The game generally has three styles of play. You either build as high as possible, use as many blocks as possible or stay below a certain height limit. The latter option forming a puzzle mode where you try to tightly stack a set number of pieces while staying underneath a target line.  This really teaches you the real way to play the game as you start learning how to predict the behaviour of structures.

The puzzle levels can be quite tricky, probably the hardest levels in the game, but they are still quite enjoyable but, for me at least, the modes where you try to build as big a tower as possible are the most fun. 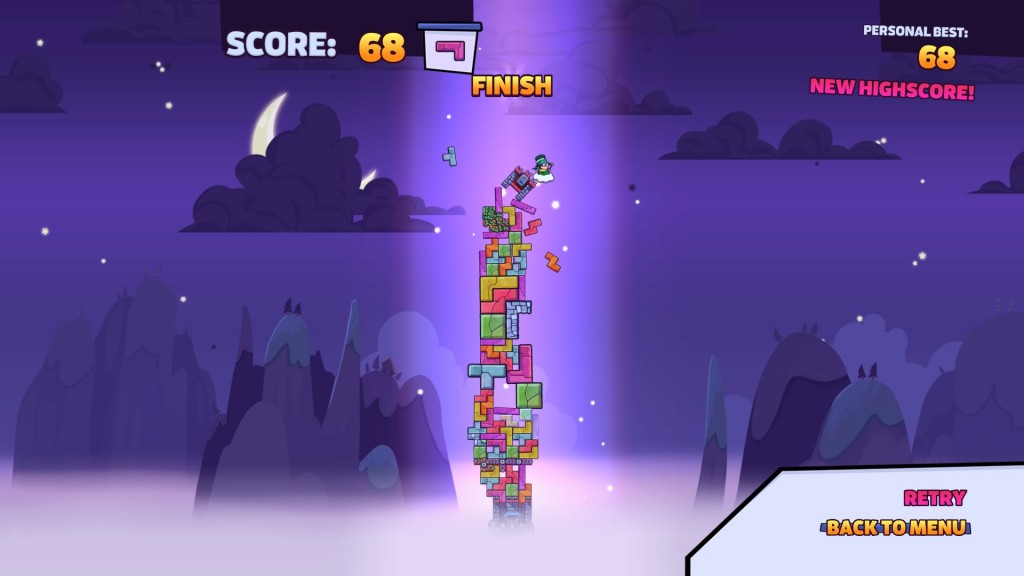 Aside from 50 single-player levels and an endless mode, the game also has local and online multiplayer modes. With this being a freebie, the game is well-populated online and, despite usually sacking off anything that involves playing with randoms, I’m properly loving playing this online. There are no lag issues at all and the three game modes (puzzle, race and survival) are all enjoyable.

The game’s simplicity is an issue. Yes, it’s a bit different to the usual Tetris or match-three puzzlers you usually get, but this is still a puzzle game and so that might put some people off and the simple presentation isn’t going to turn any heads (although to be fair you don’t really want the graphics getting in the way of this sort of thing). 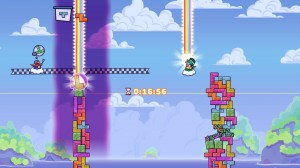 However, when it comes to addictiveness, the game has it in spades. The trophies deserve a mention too as they are genuinely challenging and going for them will improve your overall game.

Beyond that there isn’t much else to say. The physics aspect adds a really nice twist to the usual puzzle gameplay but if you’re not a fan of the genre, this maybe isn’t the game for you. As far as prices go, you can’t beat free. So give Tricky Towers a go, especially online, and you might find yourself unable to put it down.

Tricky Towers
8 Overall
Pros
+ Physics elements add a really nice extra element to the Tetris-esque gameplay. + Good choice of online modes, and decent netcode. + Challenging trophies. + Hyper addictive gameplay. + Free (in August 2016).
Cons
- Quite a simple concept, so the flavour may wear off eventually. - Presentation is pretty simplistic.
Summary
Tricky Towers may look like the sort of unwanted freebie that PS+ owners have been bemoaning for years but this is good. When you get over the fact that it isn't quite Tetris, the clever game engine makes Tricky Towers the most addictive puzzler on PSN and with its well-populated online community, this is the perfect pick up and play game around.