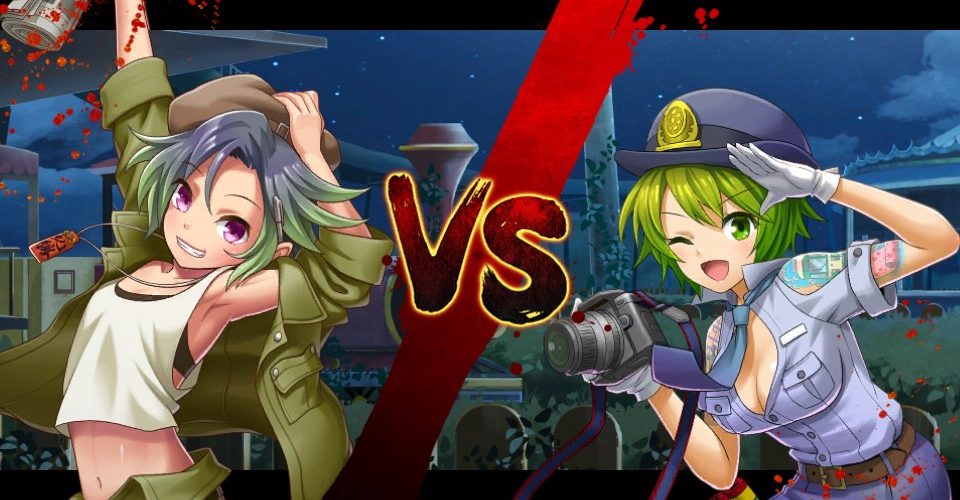 Tokyo Tattoo Girls is a strategy game released on Vita from Sushi Typhoon Games. It involves giving anime girls tattoos in order to give them stronger powers. What’s not to like about that?

After a catastrophe Tokyo has been quarantined and separated into twenty-three wards. Girls throughout Tokyo have started to have tattoos appear on their bodies granting them special powers. The strongest twenty-three take control of the wards and form The Syndicate. Japan allows this under one condition, that no-one with a tattoo can leave Tokyo. Now, years later, it’s believed that if you defeat The Syndicate you can leave Tokyo and you, the Tattoo Master, choose one of six girls to take on the Syndicate and destroy it. 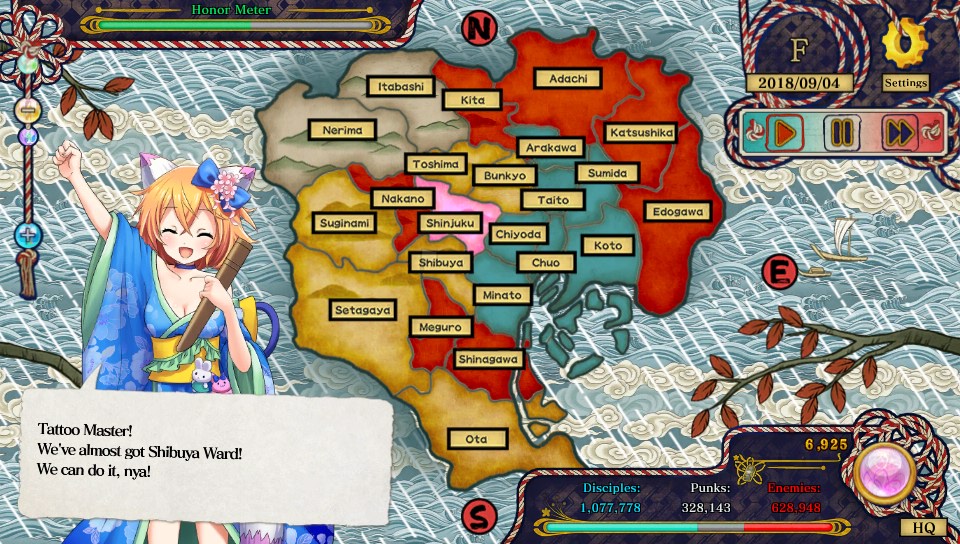 Quite an interesting premise and combined with the fact that it’s a strategy game makes it sound rather appealing. Unfortunately things quickly disappoint. First off that interesting story premise? That’s pretty much all you get. Throughout the game your chosen character talks but there’s not a story arch or even really an ending.

You start the game and there is a tutorial to explain the basics and what your ultimate goal is but it does a terrible job. There’s a list of mechanics but no context or examples which means once it’s finished you’re sat looking at a map wondering where to start. You choose a starting ward to attack and then, basically, wait.

A lot of Tokyo Tattoo Girls is automated. Each ward has Clans Women, Punks and Enemies. I believe, though I’m not 100% sure (I’ve only completed it three whole times) that to capture a ward you must turn everyone (clans women and punks) into Disciples. Do this and your chosen girl has a duel with the leader of that ward to take control of it. This happens over time but the ward doesn’t just let it happen and can fight back in a turf war if their alertness goes too high. Win the turf war and you get some Protection Money (PM), lose and you lose some Honor. Lose all your honor and it’s game over, whilst protection money is used for everything. 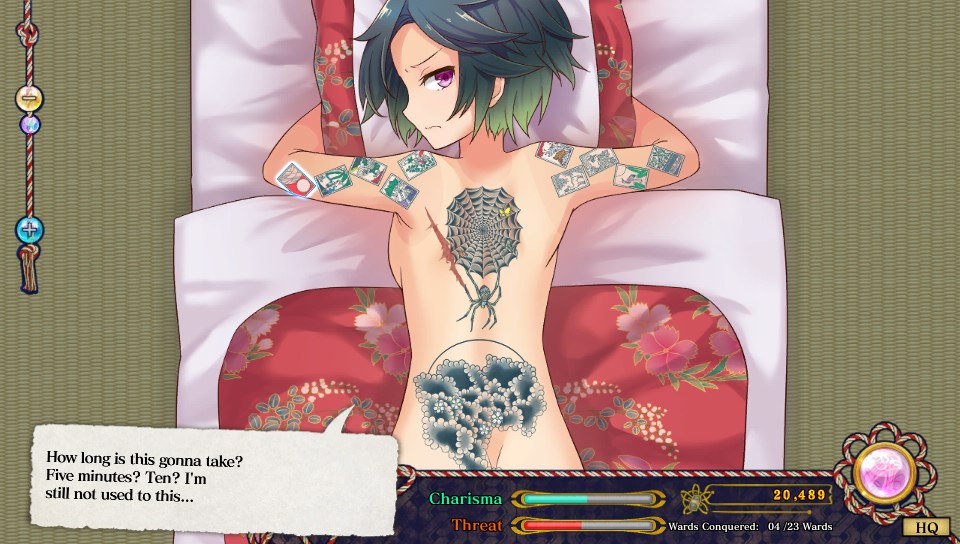 Whilst your girl is taking over Tokyo you can help her by spending protection money. You can use it to enhance the girl’s tattoo to grant her more passive buffs and unlock new moves, or you can spend it to use abilities that’ll help bring you success. Different girls have different abilities but generally they’ll allow you to lower the alert state in a ward, recruit clans women and punks quicker, regain some lost honor or block turf wars from occurring for a short period. Character specific abilities can include getting more PM quicker or slowing down the invasion process so you’re not fighting on too many fronts.

There is a cool down on each ability and they aren’t cheap to use which means you’re not constantly using them, you’re just sat there as money accumulates and your girl makes progress alone. Briefcases containing PM appear around the map for you to click on, turf wars can be stopped prematurely by clicking on them quickly enough and a gambling den appears every now and then allowing you to play a simple dice game where you just get to choose whether to roll or not and that’s it, the rest of the game is playing itself.

“But what about the duel?” I hear you cry, that could be cool. It could be, but it’s not. If you enter a duel you’ve already won. The characters talk to one another, their anime character cliché coming to the fore every time and then you’re given a choice of three dialogue options. No matter which one you pick you win the duel, but there are ‘Okay’, ‘Good’ and ‘Super’ answers which grant you a little bonus depending on how well you did. Unfortunately these don’t seem to have any logic behind them so it’s just a matter of guessing most of the time. Then you’re sent back to the map screen having captured that ward. 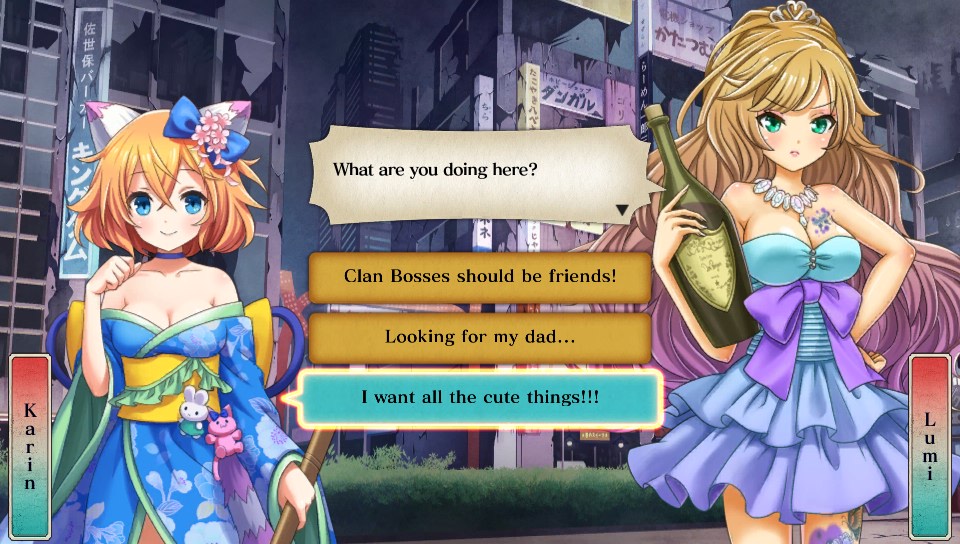 Maybe you’ve seen a trailer or are looking at the images and thinking “That looks alright to me…” but you’re probably imagining something that isn’t there. The character portraits are very well drawn and there are twenty-three girls, plus the six you get to choose from which allows you to overlook their lack of depth to a point due to the quantity. However the rest of the presentation leaves a lot to be desired as there are no button prompts leading me to believe that a lot of the game was touch screen only (it’s not) and the load times between each separate element – map, tattoo parlour and duel – are too long. It’s only seconds but when you’re basically opening a menu and can be bouncing from one duel to another quite regularly towards the end of the game you end up staring at a lot of loading screens.

It’s a shame as a decent, in depth strategy game could have been excellent on the Vita with some management and tactics involved, but there is next to none. On my first try I completed the game with an A rating on Normal difficulty and I didn’t even fully understand what was going on. I know more now and finished a Hard playthrough just as easily, seemingly some values changed but I still got an A. Each attempt, assuming you’re fast forwarding time for the majority of the game (there’s little reason not to) only takes around an hour so you can play through as each girl on all the difficulties relatively quickly.

You get a reward in the form of a passive buff each time you do for a subsequent playthrough which is nice and the trophies ask you to complete the game with each girl eight times, though I’m not sure why. For those who care about such things, the game has been out for nearly a month at this point and the trophies are yet to sync server side so only you’ll know what you’ve achieved. If this changes I’ll update the review. [As of March 17, 2018 the trophies now sync, though I do believe there are a couple of glitched ones still.] 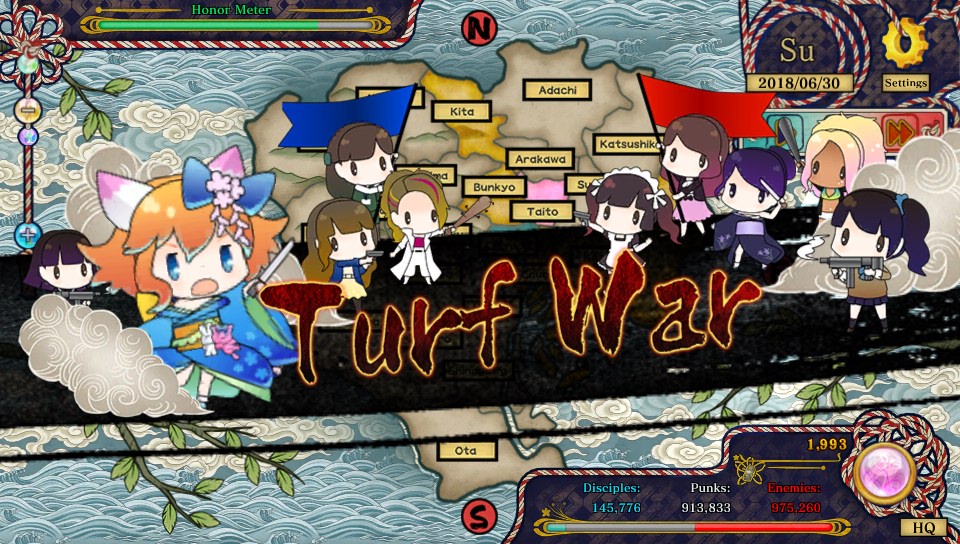 It’s a shame as the potential for Tokyo Tattoo Girls is massive, but that potential has not been met. What you get is an overly basic game that for the majority of the time is playing itself. The lack of decent tutorials and UI is luckily counterbalanced by the fact that it’s not that complicated so doesn’t seem to have any hidden depth. If you want it for the anime girls then there are plenty of all different varieties but despite some having big boobs or their legs out or whatever it’s not trying to be overly sexy either. It’s quite cheap but it would have to be a lot cheaper for me to recommend it as right now I can’t even call it a throw away experience as it’s barely an experience.

Tokyo Tattoo Girls
4 Overall
Pros
+ An interesting idea
+ Some nice character artwork
Cons
- Very little gameplay
- Slow load times
- Bad tutorials and UI
Summary
Tokyo Tattoo Girls promises a lot but delivers very little. It appears to be a strategy game but it basically plays itself with only minor input from the player. Some strong artwork at least makes the short playthroughs relatively enjoyable, just don't expect it to tax you.