The top-down run and gunner is a sub-genre that we don’t tend to see in its original form anymore.  Sure, you’ll get them as twin-stick shooters or with a heap of rogue-lite elements attached but Thunderflash, the latest offering from Ratalaika, is very much in the original style.  You shoot in the direction you are facing and the levels scroll in one direction (usually up but the game mixes this up quite a lot).

The game has an arcade look and feel to it right down to the opening fake BIOS screen that you get whenever you fire up an old arcade machine or, let’s face, MAME ROM.  From there you get a bit of story, a couple of options and a choice of game modes.  The main story mode is where most of the action is at and here you, and a local co-op partner if you have one handy, get to pick your commando (from Stan or Rock, they both play the same) and get ready to take on the enemy’s considerable army. 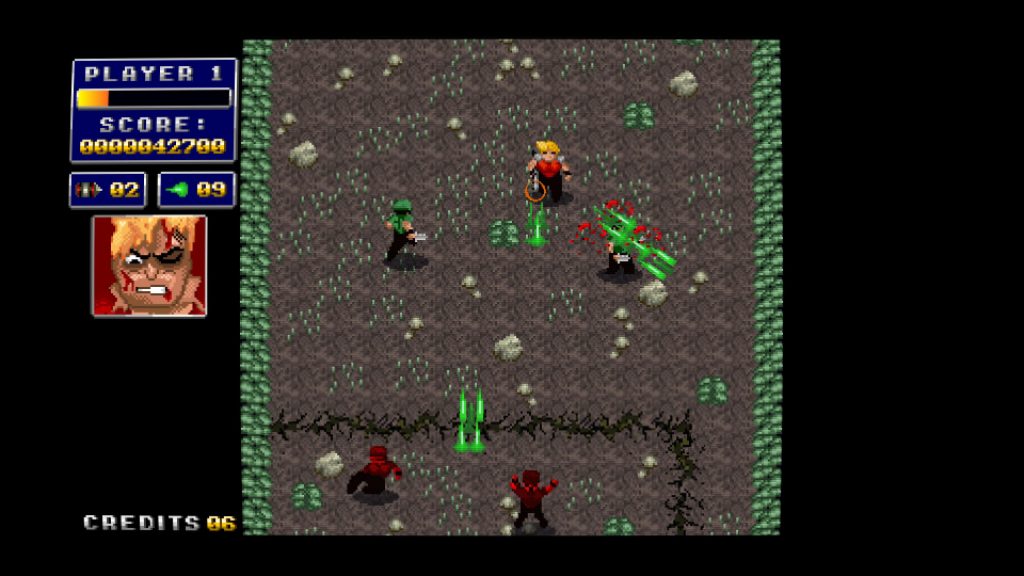 With movement on the left stick/d-pad and just two fire buttons (one for your main gun and one for your secondary rocket launcher), the controls are simple enough to grasp.  Like we said, you aim where you are facing and you can face in eight directions.  The first level has you walking upwards, shooting enemies who are equipped with either knives, guns or grenades.  It’s all very familiar if you’ve played Capcom’s Commando or, more specifically, SNK’s Ikari Warriors which is definitely the main inspiration here (although that game did allow you to aim independently from where you are facing).

What follows is five missions of that kind of thing but Thunderflash does a good job of mixing things up a little.  The direction of travel will change a few times, going through all horizontal and vertical directions, and you’ll have a couple of sections where you’ll be controlling a vehicle.  Of course the road ahead is also peppered with boss, and sub-boss, battles and a few handy power-ups that give you a new primary weapon for as long as the ammo lasts.  It’s all very standard fare for anyone who spent any time in an arcade in the ’80s but it is all put together with enough creativity, spirit and professionalism for it to feel like an honest tribute to the genre and not just a college coding project. 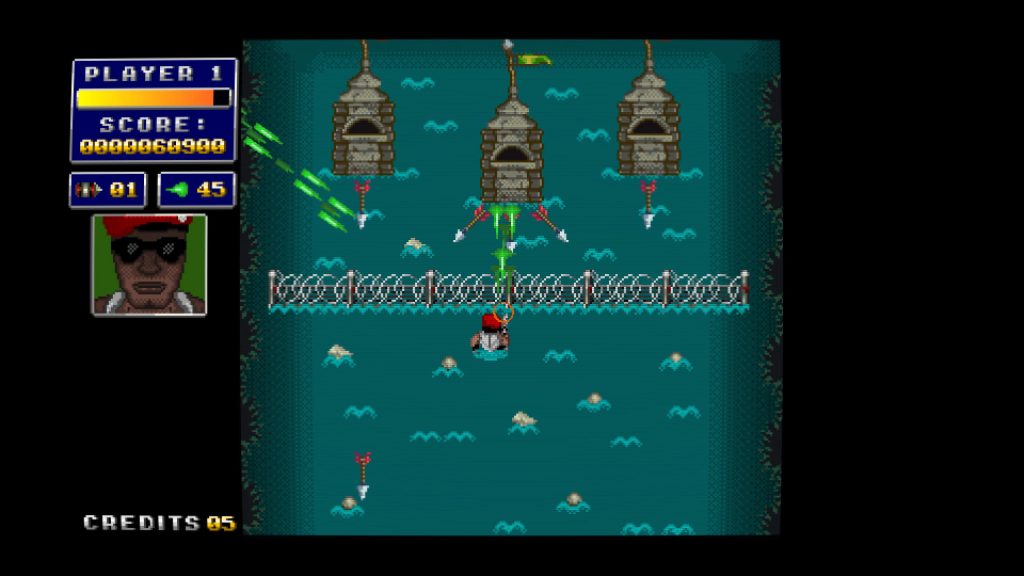 Being a Ratalaika game, you’d expect a degree of easiness to it but this genre isn’t known for being easy at all.  Commando and Ikari Warriors were absolute sods to complete and that would be the case here too.  Being on foot makes it quite hard to dodge some shots and there are some fairly tricky boss encounters, stage obstacles and moments were you are outgunned quite heavily.   The compromises here are that you have a fairly large energy bar that lets you take quite a few hits and the game gives you ten credits which is enough for you to get through two or three entire missions.  If you use them all (and you will), the game gives you five more credits for the next time you play but it also has a stage select option on the main menu and you can just continue from there anyway.

The developer (a one-person coder who does all the graphics too) does hide some story though and that can only be accessed by beating the game without using the stage select feature.  That’s a clever compromise but you can see that their original vision doesn’t quite gel with Ratalaika’s care-free attitude to giving away Platinum trophies.  That said, the overall system works.  Trophy whores are well-catered for as expected while arcade veterans have a challenge there if they want it. 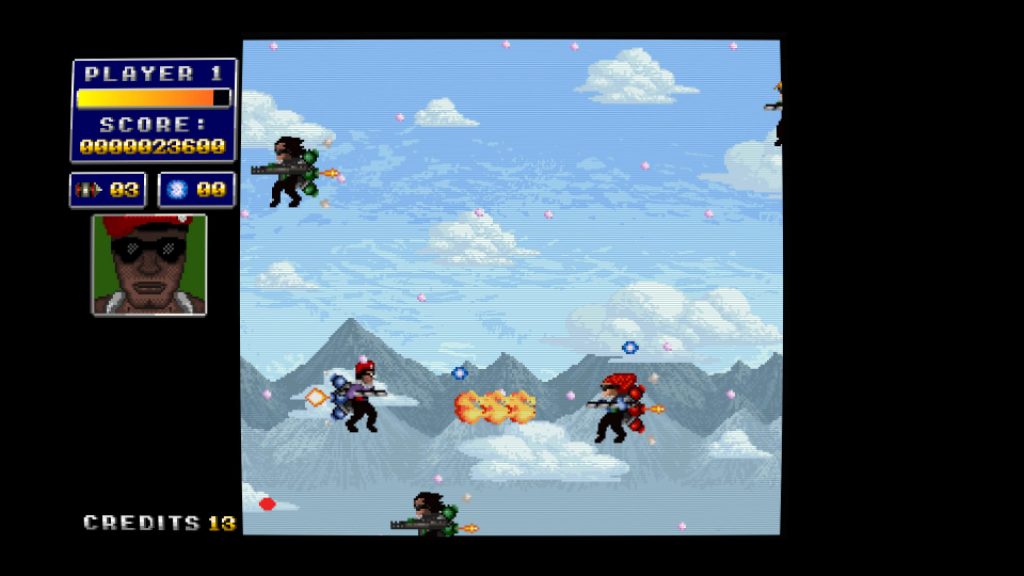 The game also offers up a Survival mode option that has you battling endless foes in a one screen arena and a Boss Rush option if you just want to play or practice those.  The boss battles do sometimes go on for a bit too long but that’s nothing new for this genre.

Thunderflash‘s visuals are, as expected, somewhat ’80s styled which means it has an 8-bit look, even down to mimicking a CRT display.  As overplayed as this look is, it works well here and there is enough variation to keep the game looking interesting.  They aren’t the best retro graphics we’ve ever seen but the colourful, chunky designs are okay.  The game also has a selection of chip tune style music tracks with plenty of synthy slap bass to help evoke memories of throwing your coins into an arcade machine.  It’s nothing revolutionary but it does all help set the tone that the game is trying to achieve. 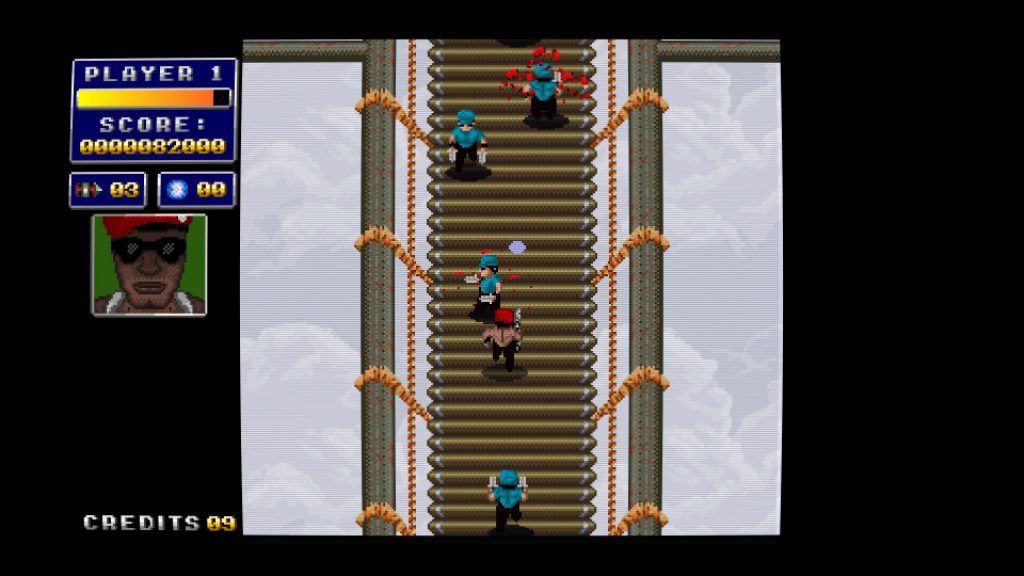 The only real issue that we had was that due to the difficulty of dodging bullets, we ended up testing two ways of playing.  The first was to take it slowly, picking off enemies as carefully as possible.  The other was to just charge through the levels without stopping in an effort to present a difficult to hit moving target.  And we actually got further doing the latter which probably does cast some doubts on the game’s level design.  That said, we were happy to see that the enemy placements weren’t random.  We miss proper level design and so it is nice to see it back but they probably could have done a better job playtesting that.

Overall though, the game achieves what it set out to do.  We were immediately reminded of the games that inspired it and the experience held together all the way to the end without any serious technical issues.  The game gives you both the PS4 and PS5 versions and we finished both but, disappointingly, there’s zero difference between them (although you do get two trophy stacks).  It would have been nice to get some PS5 haptics, so that is a missed opportunity, but that’s not what this release is about.  It’s all about the retro feel and those two easy Platinums.  If that sounds good to you, crack on.

Summary
Thunderflash does a good job of mimicking some classic arcade games and offers the player decent, and challenging, run and gun action but you can bypass a lot of that challenge by running past a lot of the enemies or with the game's generous stage select option. It's short-lived fun but fun nonetheless.