From Chameleon Games comes Tamarin. First announced at Gamescom 2017 and created in part by Rare & Frontier alumni. Tamarin is a 3D platformer with third person shooter elements you see.

The titular simian is a cute monkey. A bit like those plastic Monchichi dolls that were popular in the late ’70s. This reviewer was cursed with parents that thought they were cute, but they were hateful. Tamarin himself is the patriarch of a family that he keeps in check with regular beatings. Don’t mess. 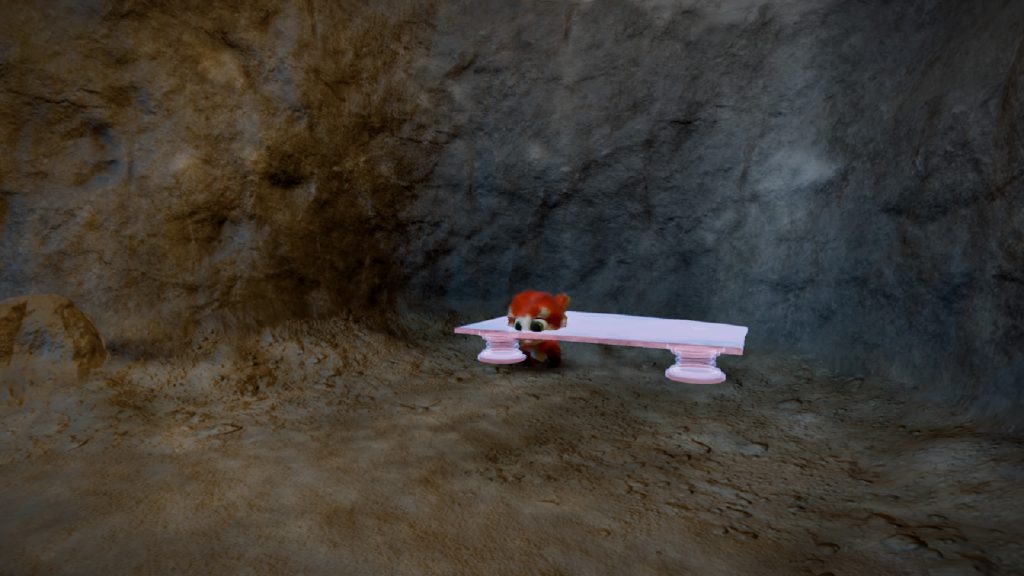 Only we come into the story and he’s all sweetness and light for the camera. At this point the enemies of the piece enter the frame. They’re primarily ants with a few beetles doing the heavy weapon work.  The Rare influence comes through as this is very familiar territory. You’ll get a very definite Jet Force Gemini vibe. The game is very much inspired by JFG and the Banjo Kazooie games.

The little hedgehog you get upgrades and supplies from could just as easily have come from one of the BK games too, he’s very familiar. The music is even done by David Wise, a Rare veteran of thirty years tenure, notably on the SNES Donkey Kong series and most of the classic Rare NES releases. We’ll go into the music later on. 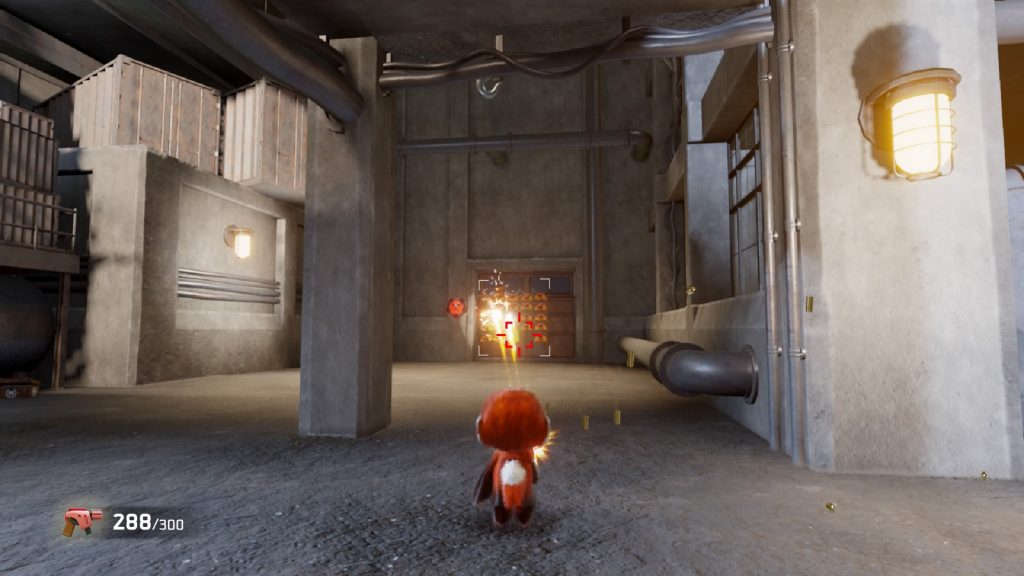 Does Tamarin hold a torch to its illustrious forebears? Sadly not. Tamarin himself is flung into action when the evil insects capture his family. Its about here that things start to go wrong. Initially you can jump on cockroaches to dispatch them, just as you can ground pound snakes to see them off. But when you’re facing ants, the main footsoldiers of the insect armies you’ll confront you’re given an Uzi.

Yes, a machine-pistol. This feels incredibly tonally dissonant to the extent that a game that would otherwise be suitable for kids becomes very much not so. It’d be like Hey Duggee off CBeebies killing Mr Fucking Tumble. That’s his real first name by the way. A cute monkey shouldn’t be packing heat in such a fashion. Never mind when the enemies gib in such an overt manner. 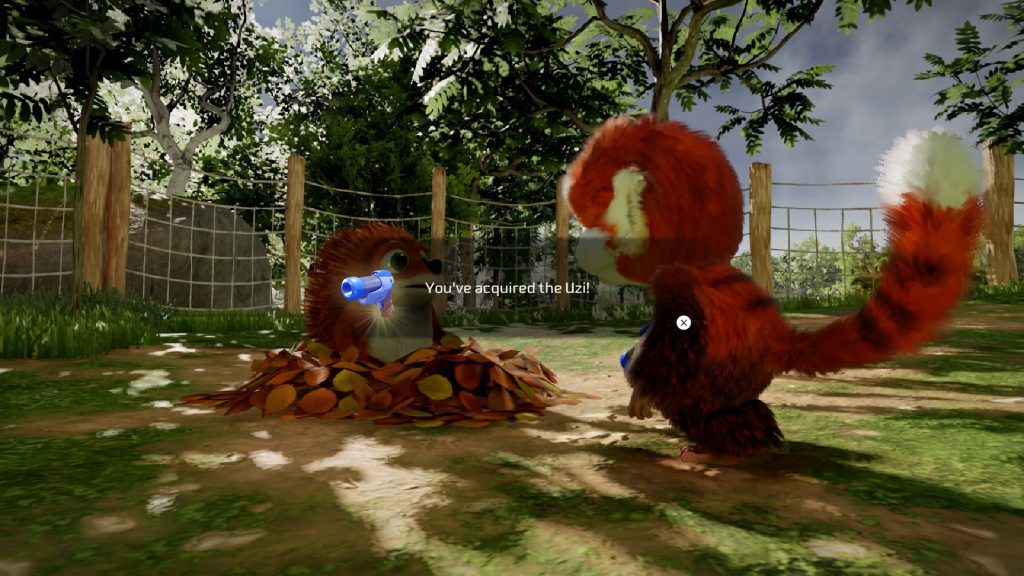 The platforming is proficient enough at least, but the gunplay is sadly lacking. The from the hip shooting against ant enemies is OK, but when you want to aim against enemies that are further away it goes a bit wrong. For a run and gunner this is pretty unforgiveable. It was partly alleviated by a patch that dropped two weeks post-release, but unfortunately the other issues that dog Tamarin remain.

The scorched burning earth left behind by the evil enemies is woefully generic you see. It could be any one of countless open world exploration games. Sadly the layout of the hub area is so indistinct and the wee signs saying what location is where are so unhelpful, that getting lost running around in circles is a very real prospect. 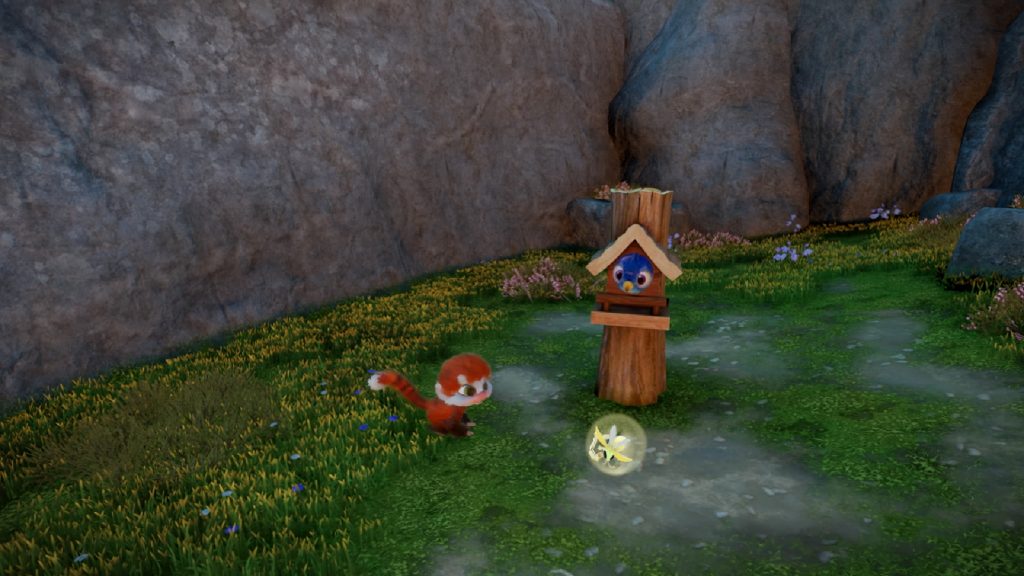 For no apparent reason you rescue little blue tweetie birds. Upon delivering three to a vacant birdhouse, they garner you with fireflies, and they in turn allow you to unlock gates to the next area. The insects really hate them for some reason and will readily dispatch the poor blue avians. Perhaps they really hate Twitter. Who knows.

Anyway, the further you progress, more fireflies are required and occasionally you’ll have to hunt around to fulfil the requirements to get more. These often involve timed platforming gauntlets with a tight deadline. Unfortunately the wanky camera often proves your undoing rather than the jumping itself. It’s very frustrating. Additionally, there are some canned animations that play out when you are asked to complete a longer jump. Rather than a double jump, you get a weird QTE trigger instead. Thankfully there’s no time limit, but you have to wonder why a QTE is deemed necessary. 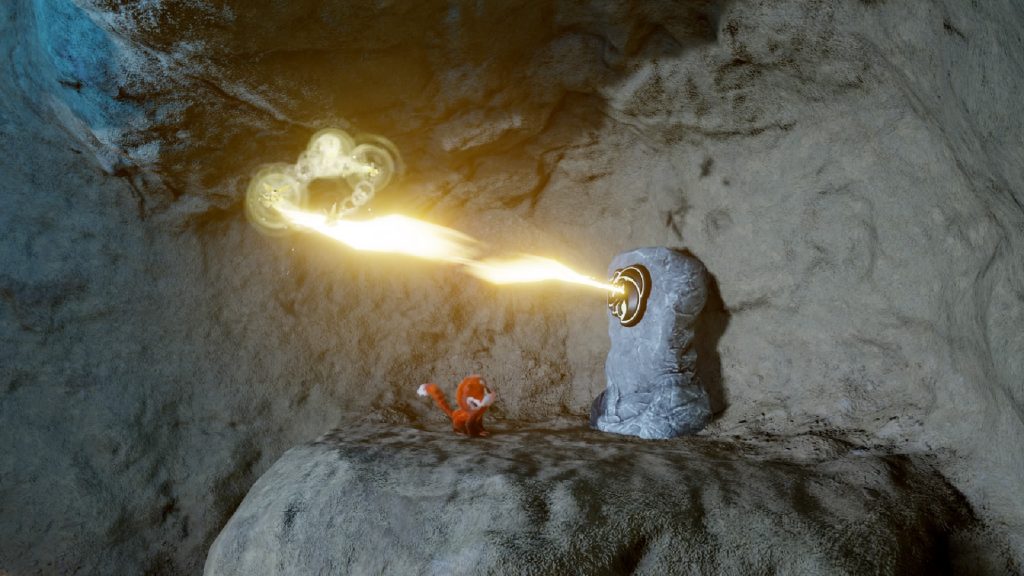 More frustrating than anything else is the checkpointing. When you move between areas you’ll generally trigger an autosave. But on some extended sections you’ll go so far without an autosave that you’ll face a lengthy trek if you die. There’s one sequence in the insect factory that completely broke our will and stopped us playing. If we died we had a veritable trek to get back to try and progress.

Then we died again. And again. And again. It gets old. We managed to save by mistakenly backtracking, but we still had lengthy corridors to traverse, this time without enemies thankfully. But then we died once more. The goodwill is gone. Here’s a suggestion to the devs, how about adding an autosave after you’ve cleared a room of enemies. You unlock doors by killing the last enemy, why not save then? Unfortunately in its current form, the save function is irredeemably broken. 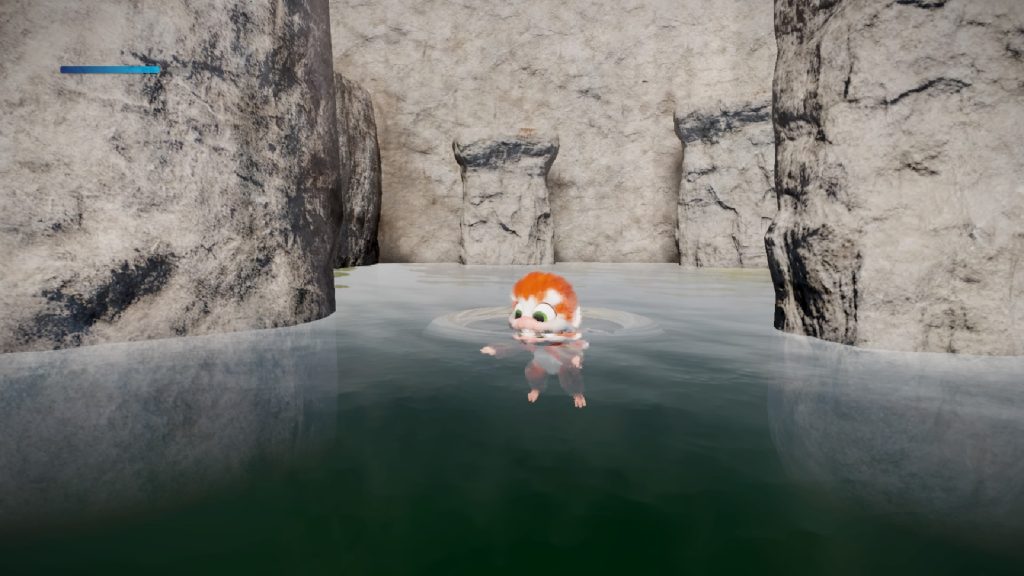 We mentioned David Wise’s music earlier. It really is quite excellent and worth having the volume up for. Each of the areas you’ll encounter has its own distinct audio theme and Wise’s music is consistently great. It’s just a shame that to hear it as intended, you have to play the game. You can download the soundtrack via Steam if you wish. We’re certainly going to look into it. It’s up there with Rare’s finest by the likes of Grant Kirkhope. 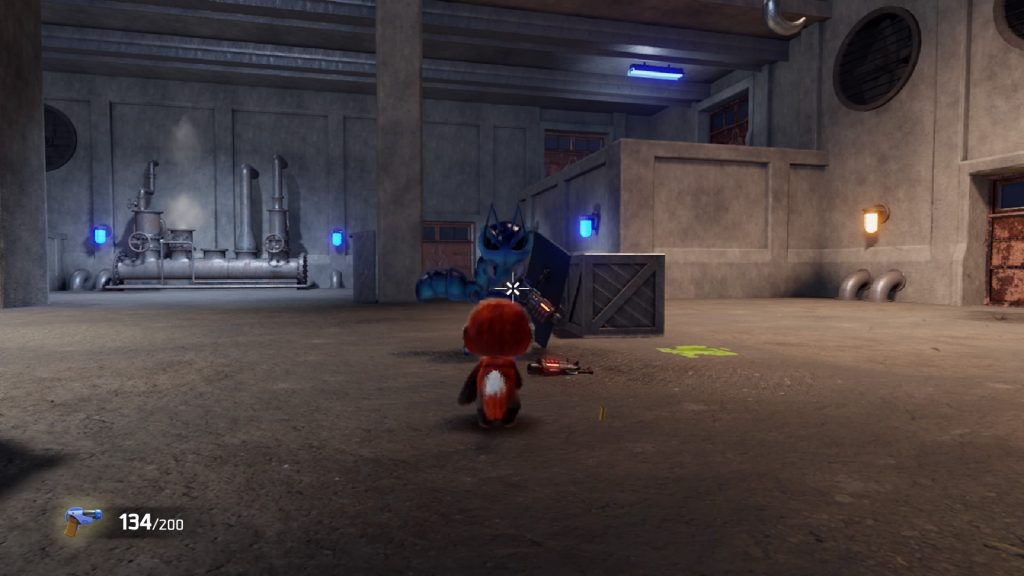 Ultimately, Tamarin is a below par effort that just doesn’t quite add up. It’s not completely terrible, it just has far too many niggles for its own good. The checkpointing and odd canned jumps being two notable problems. Perhaps if the former is addressed properly, we’ll continue with Tamarin. But as things stand, we don’t have the inclination to do so.

Tamarin
6 Overall
Pros
+ Platforming is generally solid
+ Collectibles aren't a huge chore barring the birds
+ As long as you don't try fine aiming, gunplay is OK
+ Unless Rare suddenly pull something out of the bag, as close to a spiritual successor to JFG as you'll get
+ Music is ace
Cons
- Checkpointing sparse with lots of retracing your steps required
- Pathfinding poor
- Generic as you like
- A pistol toting cute monkey feels incredibly jarring
- Glitchy wayward camera
Summary
Tamarin is a cute monkey with a gun. It's as jarring as it sounds. Not helped by a wayward camera and some awful checkpointing, this isn't quite the Jet Force Gemini spiritual successor it could be. More like Git Force Gemini.