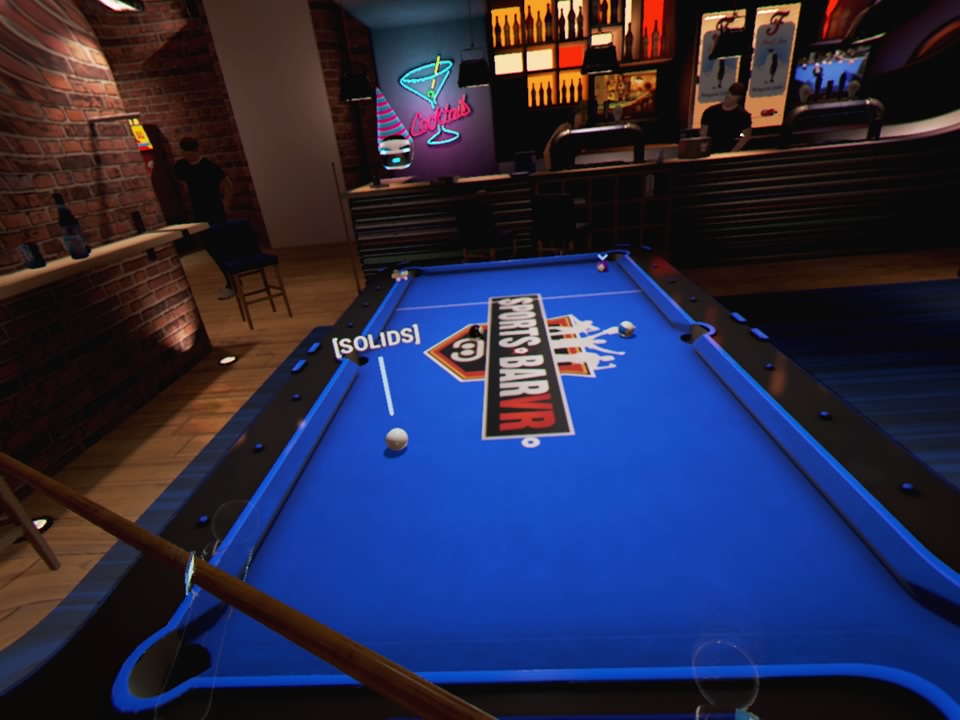 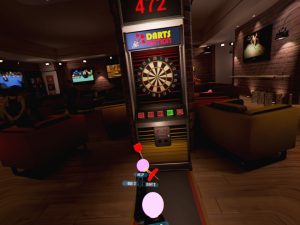 Sports Bar VR  markets itself as a virtual hangout more than it does as some sort of legitimate sports title. Set in a smart looking sports bar, the game is about meeting new and interesting people and waving your hands at them through the magic of PlayStation VR.

The game is a compendium of traditional-ish bar games. Coming as it does from Cherry Pop, the makers of Pool Hustle, the main meat of the game is in the pool mode but it also offers darts, air hockey and skeeball, each of which is controlled using the Move controllers.

You move around the bar by pressing a button on the controller to teleport within a circular area but you could chain jumps until you get to any corner of the bar. Teleporting to an activity locks you onto it for actual play (so, for example, if you teleport to one of the air hockey tables, you’ll be in playing position). Another button brings up a handheld menu on your non-dominant hand while your other hand can point at the options you want.

It is fiddly at first and it gets worse when you start your first game of pool but it does get better. The trick to being in the right place is to hold down the two main buttons on the Move controllers. That puts you into ‘hulk’ mode (not sure why it is called that) which allows you to move yourself around with more precision (it kind of feels a bit like rowing if that makes sense).

Another button on the Move controllers will bring up a cue into your hand. Once you get into a pool match (UK, US, three ball and killer rules available), the controllers allow you to manipulate your virtual pool cue in 3D space. Once you’ve figured out the angle of your shot, you can lock it in with and then concentrate on hitting the cue ball with your dominant hand’s controller.

It takes some getting used to but it eventually clicked for me. I was trying to take down one of the hard AI opponents (for a trophy) and when I finally managed it, I played a pretty good game of pool there.

Setting up shots can be a bit fiddly as you try to figure out where to stand (the in-game feet position markers are absolutely useless and they point in the wrong direction by 20 degrees for some reason) but you soon get used to it and this mode ends up being genuinely enjoyable and satisfying. I wouldn’t want to play it with the assists off but equally it doesn’t do much of the job for you either.

The AI is actually fairly well pitched with lots of difficulty levels so you are bound to find the one for you. Doing well in matches will earn you XP that can be spent on customisations for your in-game avatar (a floating VR headset with your choice of hat) but if you want to play online, you can. More on that later. 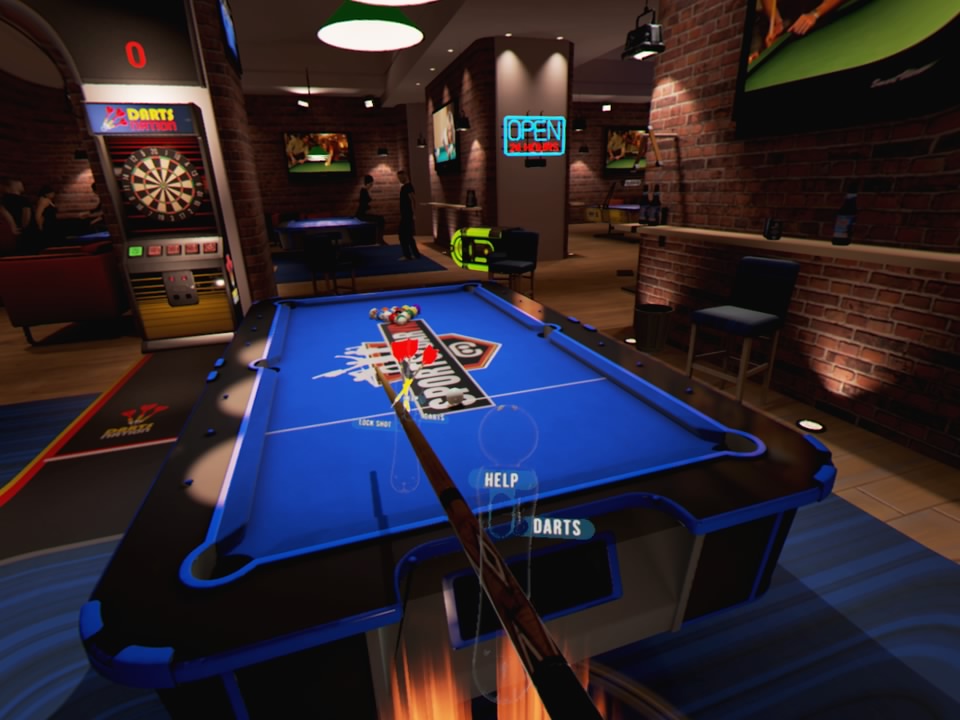 Next up is darts. With this one a button press will make darts appear in your non-dominant hand, you can then grab them with your other hand (by holding down the trigger button). You then throw them, releasing the trigger button to let go.

The key to this not sucking immensely is the ability to lock in your aim with the other trigger button. At that point you are free to throw it without worrying about it missing the board by five meters (which is what happens if you don’t lock the aim). It’s not perfect, and it kind of lacks purpose, but it does kind of work in that it won’t turn you into a virtual Phil Taylor but it is still playable. Kind of like real darts then. I couldn’t find an AI opponent on this mode though, which is a shame

Air Hockey is a lot more immediate. You grab the… er…. whatever those things are called, paddles I guess, with the trigger again and start smashing the puck about the table. Much like real air hockey the puck will bounce off you and into your own goal and sometimes you’ll cut a perfect shot into their goal. The AI can be a little too telepathic in this mode for my liking but the physics feel pretty much spot on.

Last up is skeeball. I’m not entirely sure this belongs in a bar (then again I’ve never been in a sports bar) but it’s the kind of thing you’ll find in a fairground. You throw balls into holes and hope they don’t bounce off the board or miss. The motion required to make it happen consistently is a little lost on me, also there doesn’t appear to be any AI opponents, making this a little pointless. 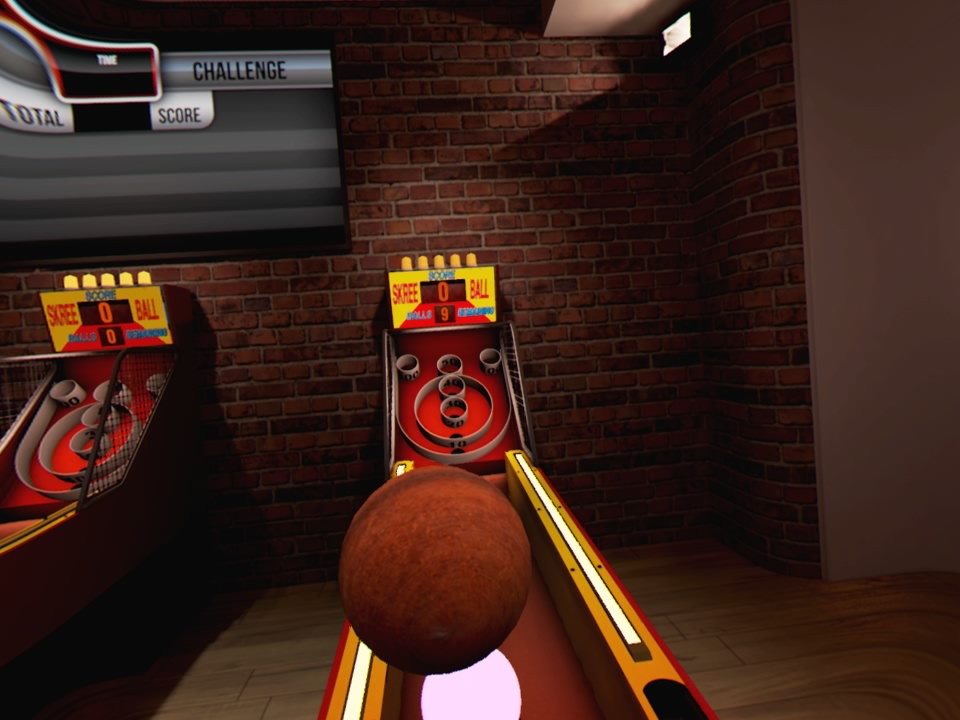 That’s it. Despite a table tennis paddle being shown in loading screens and promises (I’m not sure who from) of chess and draughts, so far all I can find is these four modes so I’m assuming that’s all you get for now.

If you tire of the AI opponents in the game, you can also get online and share a bar with a few random strangers. Here the interactions are a little limited. You can play the games with each other but beyond that you are only able to shake your Move controllers in each other’s faces or throw objects vaguely near each other.

This lack of communication means that whenever I’ve been online, players have been trying to mess with me. Either trying to obstruct my view as I’m playing or walking away from games that we’re playing. Perhaps more ways to interact would develop player relationships a little and make everything a little more meaningful.

Once you get used to the controls, there’s a good pool game here with a few extras that range from decent to superfluous. The presentation is solid if a little unremarkable. While visually it all holds together well, especially during pool matches, the repetitive blues soundtrack courtesy of the world’s most limited jukebox did get on my nerves a little. 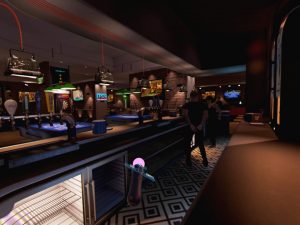 If you want a pool game, this is a good one. As a virtual hangout, much like real bars, you might want to bring your friends along. But there is fun to be had here, even if we’d have liked to see it fleshed out with more modes and more ways to hang out. A few card games or traditional board games would have elevated the whole package, as would some changes of scenery.  If Cherry Pop can continue to support the game with additions, that would make this a really good package to get in on early but if bar games aren’t your thing, there won’t be much reason for you to check this out currently.   Personally though, I’m enjoying it.

Sports Bar VR
6 Overall
Pros
+ An enjoyable pool simulator that uses the tech well + Air Hockey is pretty realistic and roughly the same amount of fun as you'll get from the real thing + A solid VR environment + Good controls (once you get used to them)
Cons
- Lacks modes and two of the four (darts and skeeball) are more frustrating than fun - AI not always available on some games - Not many ways to interact online
Summary
As a pool game, Sports Bar VR nails it. It's as close to the real thing as you can get without leaving your house. The other modes are variable though and while the setting is quite nice in VR, the package is a little thin right now. However, it gives you more than Hustle Kings VR but maybe less than you might have expected overall.