Who lives in a pineapple under the sea? The protagonist of Nickelodeon’s multimedia behemoth, Spongebob Squarepants, that’s who. In this case, this is the latest of THQ Nordic’s rereleases of previous generation games. Spongebob Squarepants: Battle for Bikini Bottom originally came out in 2003 for PS2, Gamecube & Xbox, garnering a fair aggregate score of 70 across all three systems.

Spongebob Squarepants: Battle for Bikini Bottom – Rehydrated (gasp) is a remaster of that game with uprated graphics and bonus content, perhaps hoping to get those who liked the original as kids to get their offspring to play as well. Just as the original game was produced in the common at the time Renderware, this has been authored in the similarly ubiquitous Unreal Engine.

The original dev Heavy Iron; while still existing; aren’t on development duties this time. That task has fallen to Vienna-based Purple Lamp Studios instead. This relatively new team are made up of industry veterans so it’s not like THQ Nordic have given this task to novices. 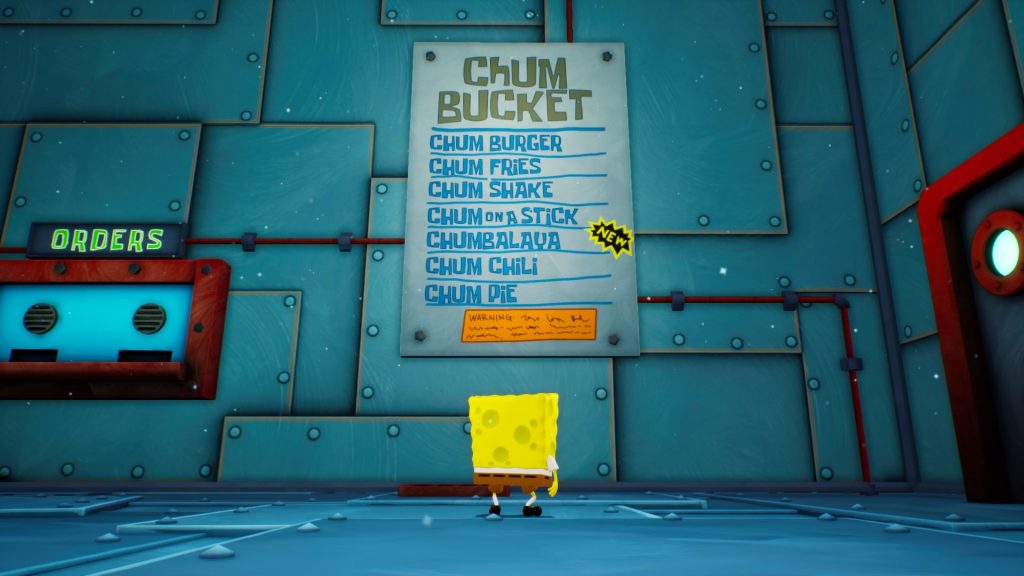 This is a faithful reproduction of a game beloved of speedrunners, believe it or not. Better still, it’s actually fun to play. Well scripted and fully voiced by all but two of the original voice cast, it captures the look and feel of the TV series and multiple films well. It’s even funny on occasion.

Your journey begins, as do many episodes, in Spongebob’s house. Your direct neighbour is the long suffering Squidward Tentacles and your best friend is Patrick the starfish. Just as in the cartoon, their houses are directly adjacent to one another. This acts as your initial hub area with progression gated by your progress across the various areas. 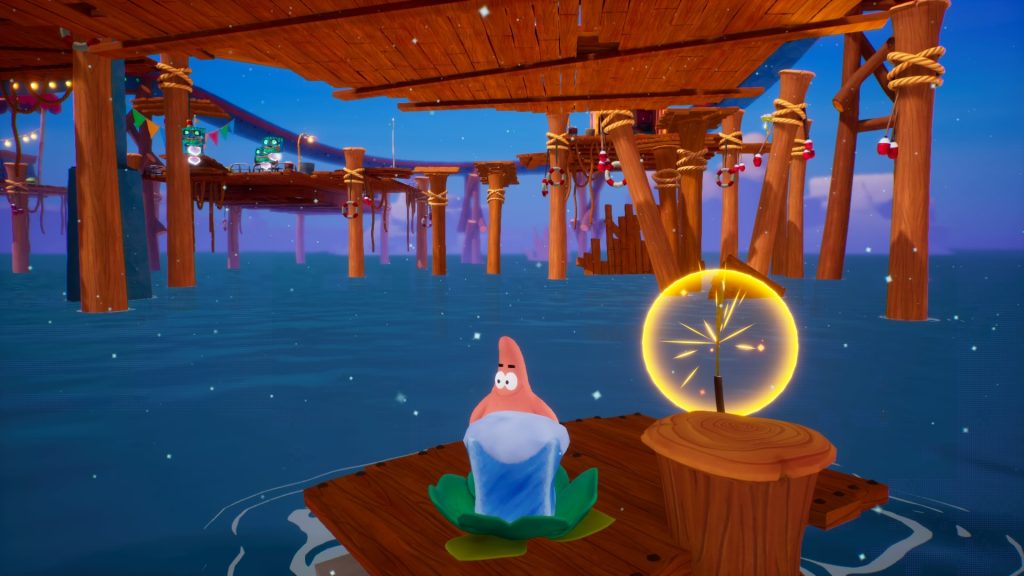 Similarly, the main antagonist is once again the evil Plankton. It’s one of his half-arsed schemes that lead to Bikini Bottom and surrounding areas being overrun by malevolent robots. They’re handy from your point of view as they provide cannon fodder for you to cleave down and collect Shiny Things, the main currency. There’s an additional collectible type in Patrick’s discarded socks, ten of which can be collected for your ultimate goal, gold spatulas. 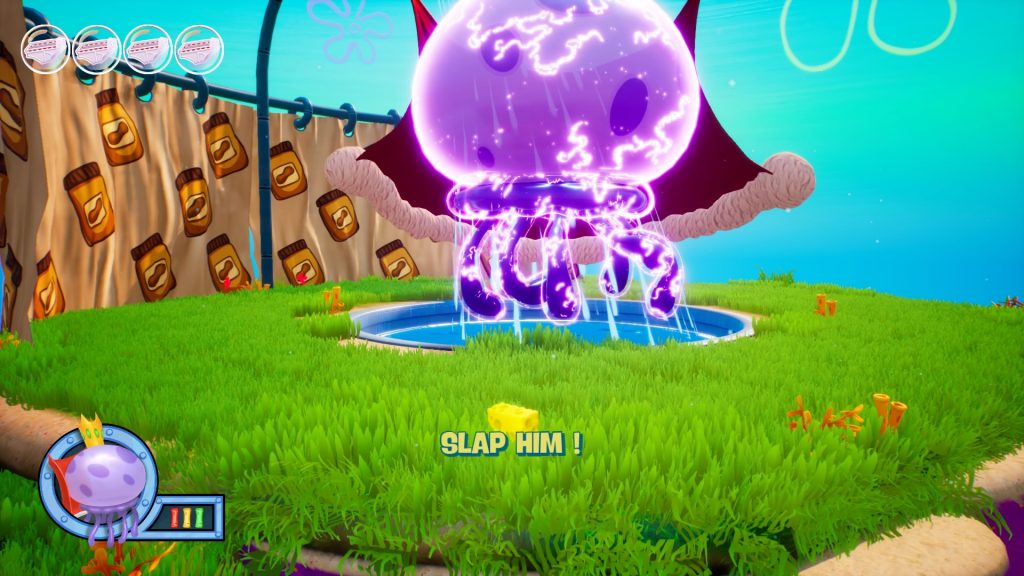 You see, Spongebob is the fry cook at the Krusty Krab and he really loves spatulas. Fair. At least it’s not a sieve as that’d make him a psychopath. His boss Eugene Krabs is also a purveyor of gold spatulas that he trades for increasingly higher amounts of Shiny Objects. Sadly he’s not voiced by Clancy Brown (AKA Kurgan off Highlander) as in the cartoon and the voice actor they have instead isn’t quite so good.

All areas are ultimately gated by your collection of gold spatulas, but that’s no bad thing as you’ll have a blast doing so. Original developer Heavy Iron also did Wall-E on the 360, another unexpectedly good kids game, their prowess at turning what might otherwise be mundane coming to the fore. Purple Lamp have done a great job in translating the game to the current generation of consoles with uprated visuals and an all new multiplayer mode. 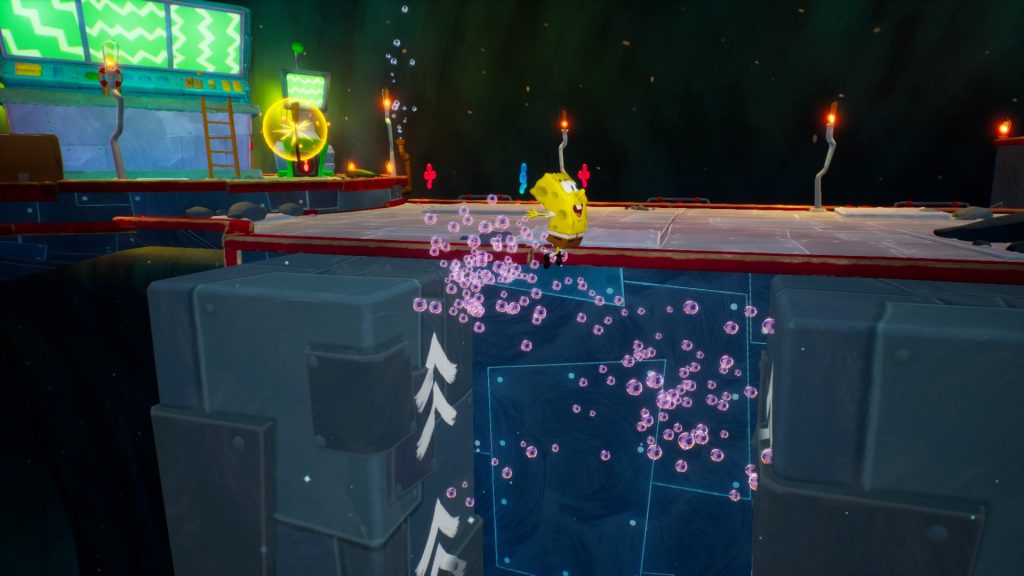 Refreshingly there’s local multiplayer as well as via PSN, so those without PS Plus can enjoy the fun too. The multiplayer isn’t an arena battler as you might expect. Instead it’s a horde mode where you and a partner face off against waves of increasingly more difficult enemies. It’s quite good as it happens.

As well as Spongebob, you’ll also play as Patrick & Sandy Cheeks. Patrick the starfish is the heavy hitter of the bunch and Sandy the Texan squirrel is able to lasso enemies while also hovering. It makes sense in context, trust us.

For a game ostensibly aimed at kids, some of the later levels present a stiff challenge. Such a challenge in fact, that our six-year old sacked it off after having played without many problems until then. The Kelp Forest level is a particular culprit in terms of the level design, but it’s a rare misstep. The Sand Mountain level deserves a particular mention too, especially the one-shot collectibles that reset when you fail a run. Up until this point, Battle for Bikini Bottom is a delight for all ages. It doesn’t resort to slapstick nonsense in the Lego facepalm way, but remains faithful to the source material. 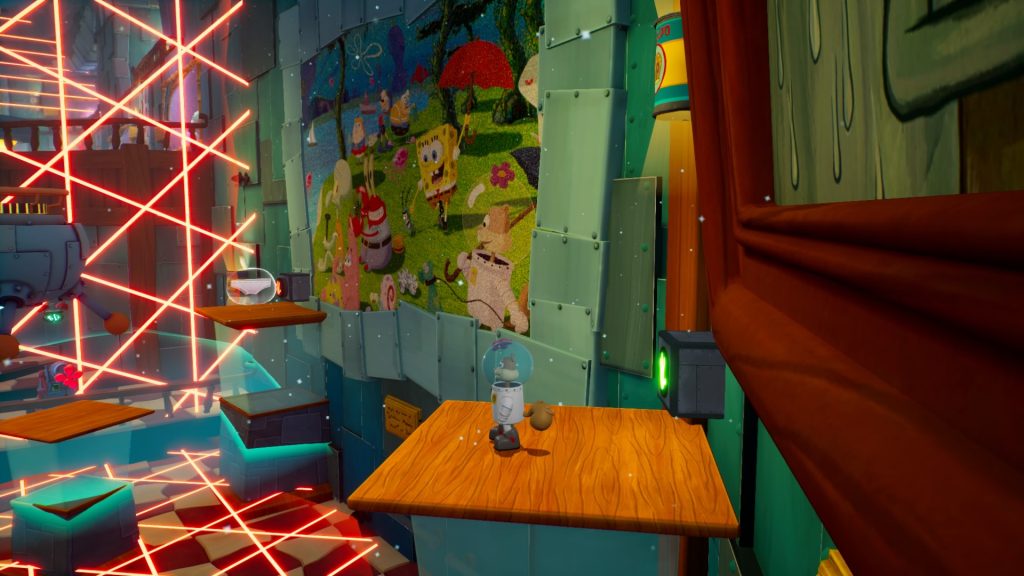 Unfortunately the game can prove glitchy on occasion, we had to restart as we missed out on one early spatula due to an encounter not working as expected.   There’s the odd cosmetic glitches too, such as the wave effect on one level and the lasers in another. But they’re generally the exception here.

Ultimately, what we have here is a fun licenced game for all ages that you can play with all the family if you so wish. The source material is well adhered to and the game remains fair handed until later levels at least. We’re still struggling to get through Kelp Forest, one puzzle solution continuing to evade us.

If you played this back when, your kids are sure to love it, just as those that missed it first time round are sure to enjoy it too. We certainly did and we’re the wrong side of forty. There’s bosses that were previously consigned to the cutting room floor reinstated, so something new for previous players. Rather this than Crash Bandicoot anyway.

Cons
- Later levels are hard going
- Missing voice talent is unexpectedly jarring
- Tartare sauce robots are the biggest pricks going
- Occasionally glitchy
Summary
Spongebob Squarepants: Battle for Bikini Bottom - Rehydrated is a great example of how to do a remaster. A great graphical upgrade and addition of a new multiplayer mode make this a welcome, if unexpected addition to the realm of remasters. Rather this than another Crash Bandicoot anyway.