Shing! is a side-scrolling hack and slasher very much in the grand tradition of games such as Golden Axe and, more recently, Castle Crashers.  This is a genre that doesn’t make as many appearances these days as others.  We’re forever reviewing top-down shooters and 2D platform games but, clearly, the golden age of the hack and slasher/beat ’em up was a long time ago.

But here we are, looking at one and one that promises to reinvent the genre a little with a new control system.  A 7gb install size promises that this isn’t your usual indie game and that’s pretty evident right away with an anime-style opening cutscene that looks pretty authentic.  It sets up the story which frankly we lost interest in pretty quickly but essentially you (and up to three friends) control a squad of ninjas as they attempt to take on a demonic force that is taking over the land. 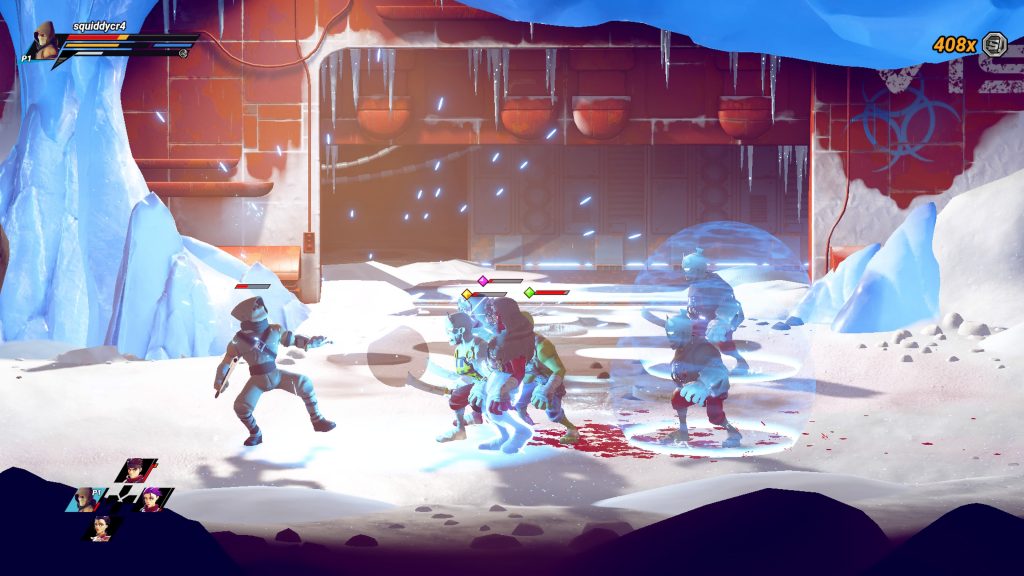 The location is a little harder to pin down.  We assumed Japan because of the art style and the similarities to Gekido but one of your ninjas is Scottish and by the end of the game you end up in Egypt or something.  Likewise the time period is also debatable too as it all seems to be set in the past until lasers and robots show up.   It’s all a bit odd.

But anyway, once you get into the game, the objective is to keep moving right.  The screen will stop scrolling often and the only way to advance is to clear out any enemies on the screen.   Just like Golden Axe or beat ’em ups such as Final Fight or Double Dragon.  This is where Shing! feels a little different to the games that inspired it.  All of your stabs and slashes are controlled by way of the right stick and these are very intuitive.  Stabs are short pokes of the stick while your slashes are curved motions.  It feels good initially and allows for some good combos and very precise attacks.  That said, your thumb might get a little tired after a long session of wiggling it around. 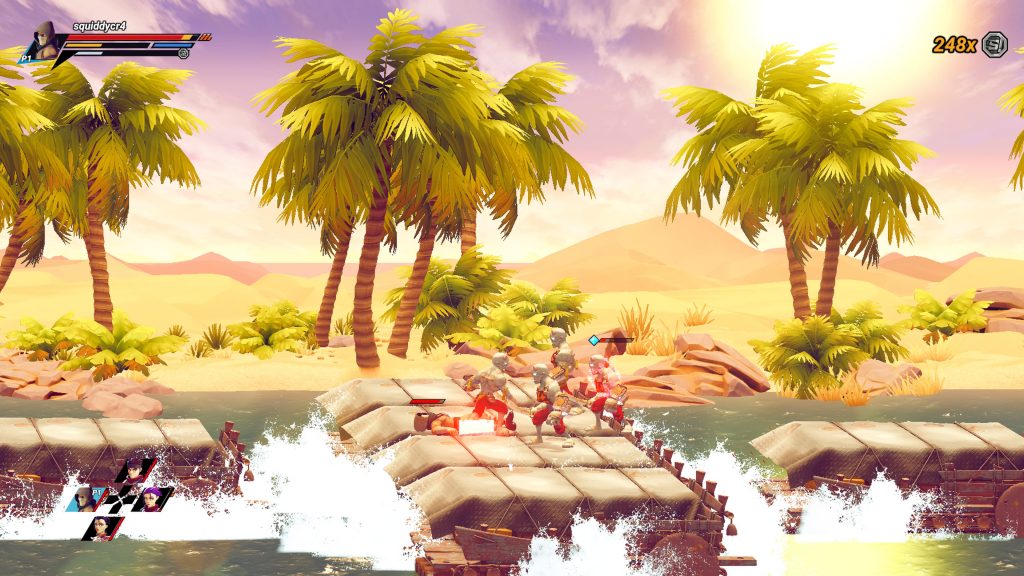 The buttons aren’t really used save for the shoulder ones which control blocking and dashing (which is used as dodge).  Does the control system make things better?  I’m not sure but it does make Shing! feel different to other games like it and it does make you feel a bit more engaged than those games where usually pressing a couple of buttons launches you into some sort of acrobatic combo where as here you do feel more in control of your attacks.

Full disclosure:  we did end up dropping the difficulty down and this was due to a few factors.  Firstly, the levels are long.  There are only seven of them but it took several long sessions of play to get through the whole game.  But the main problem is that boss characters, or at least mid-bosses, end up coming back as regular enemies a’la Streets of Rage 2.  This can cause problems, especially when you get combinations of these difficult enemies. 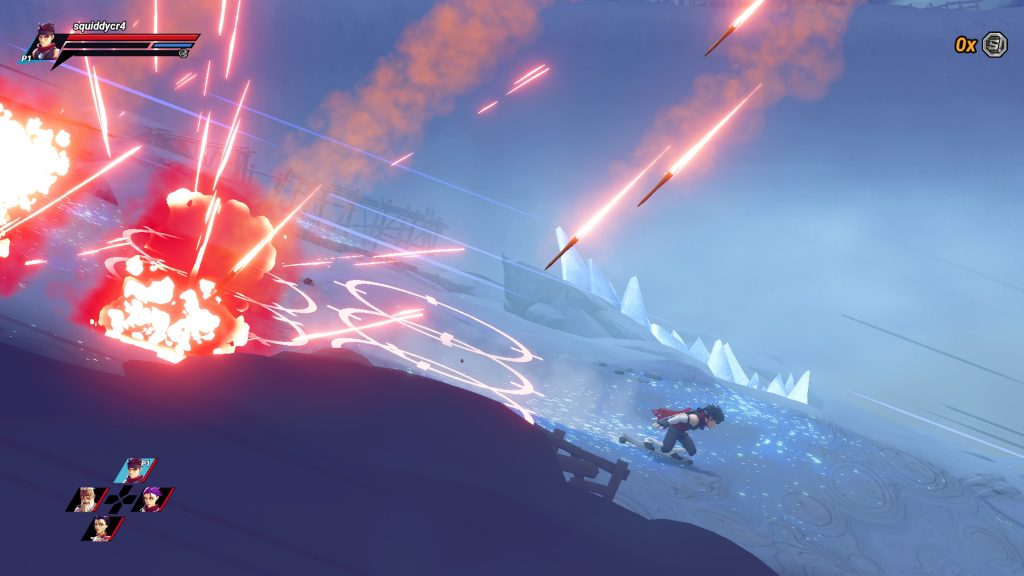 For example, one enemy recharges their health very quickly while others have damaging area of effect attacks.  Put them together and suddenly the game gets tricky.  Very tricky.  But on Easy the level was about right.  We took a lot of damage and had some frustrating moments but we eventually got to, and beat, the final boss.  But it was far from being a pushover.  There are some really tough moments even on Easy, especially some of the bosses and set pieces but this is also where the game is at its best.

When you’ve got various difficult enemies with other less dangerous but more disruptive ones all ganging up on you, it really takes some skill and strategy to get through them.  From enemy prioritisation to combo building and air juggling to using special attacks, this is a game where you can’t just button mash (literally!) and while one of our writers had to hear me whining through the latter stages of the game, I really enjoyed the process. 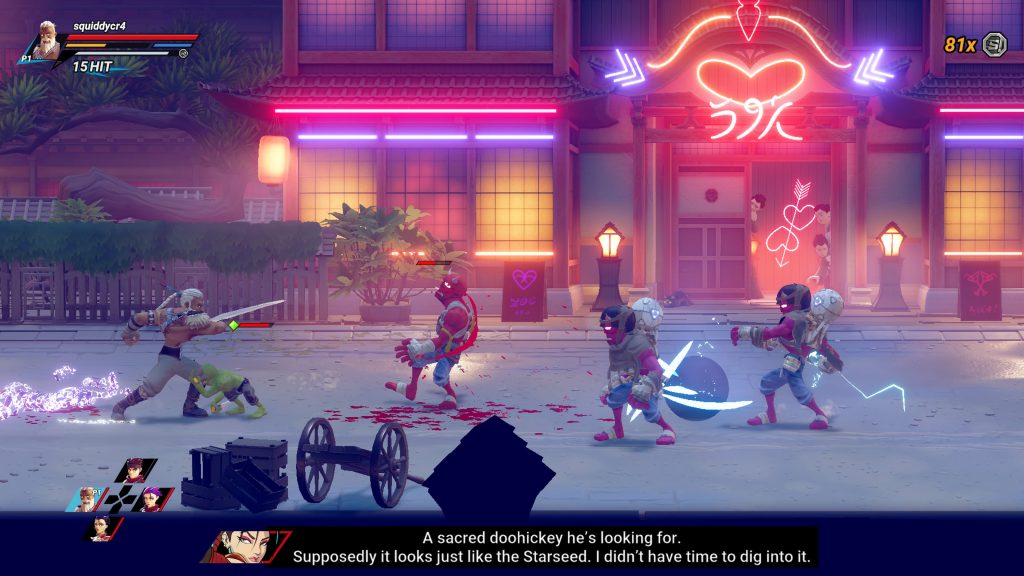 To break up the constant combat, the game does throw in some light puzzling and some cool set pieces and we did appreciate these moments, even if some were just visual set pieces while others were more gameplay-based.

One of the interesting aspects to the combat is that some enemies drop orbs when they die.  These have different effects:  green ones give you back some energy, yellow ones allow you to drop bombs and others power up your strikes with fire or electric buffs.  Some enemies need to be hit with these buffed strikes if you want to do any damage and this is all handled very well with you needing to think about how best to use them. 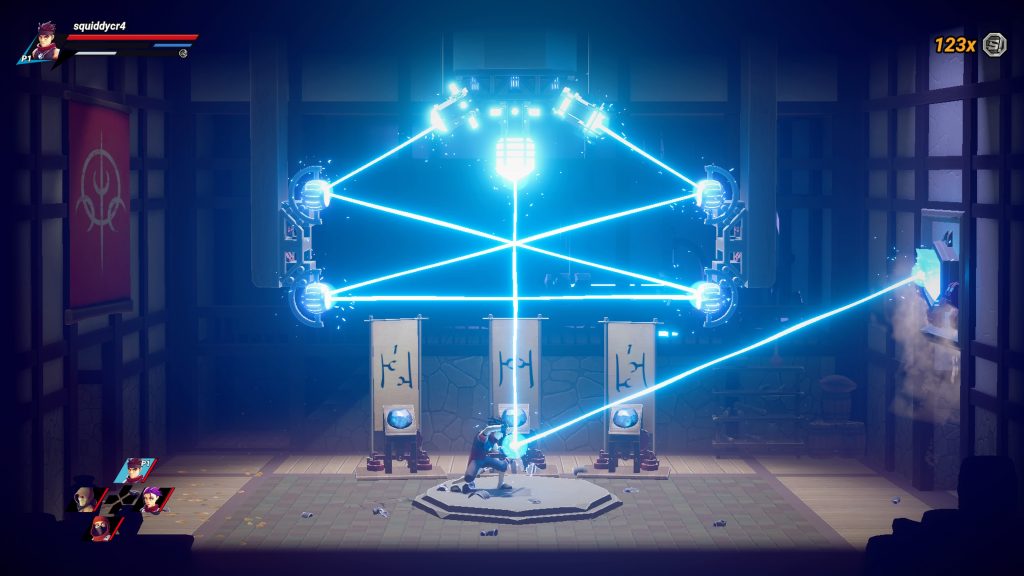 However, if it does all go to hell, Shing! does offer a generous checkpointing system.  Also, your squad of ninjas all act as extra lives and can be switched out at will with the d-pad.  Or they can be played by co-op partners.  Currently the game only supports local co-op, which is a little pointless in these Covid times, but the game will have online co-op patched in soon according to the devs and we’ll be keen to test that out.

The balance of difficulty against the more generous aspects of the game mean that there’s a good challenge but you can always make progress.  Well most of you will, there are definitely moments that might be too much for some, even on Easy.  The final boss is a good example of this.  He’s an absolute pig to beat and has three forms but there’s a checkpoint on each of them and that’s just about right. 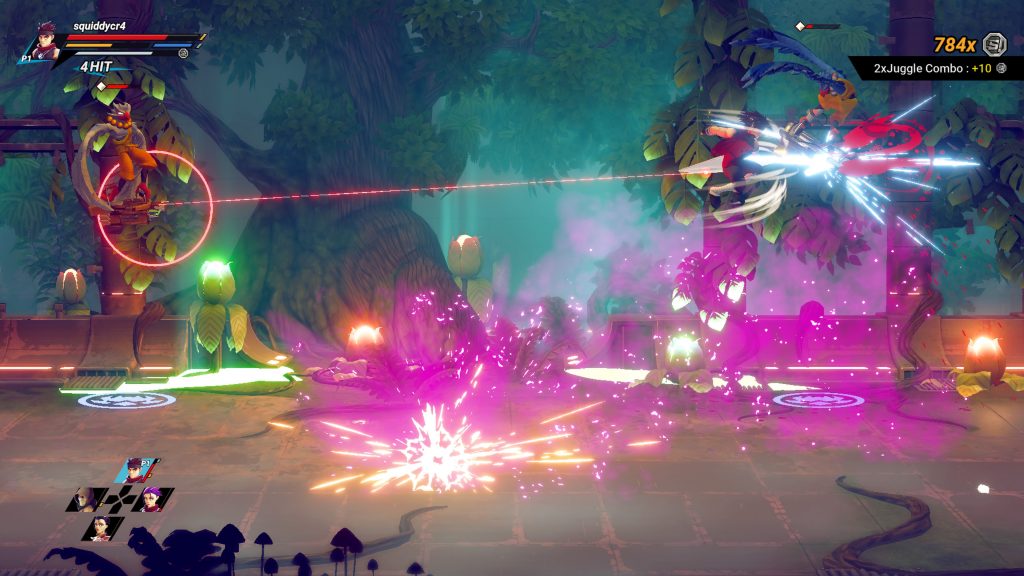 It can get pretty repetitive, especially given how much they re-use enemies, but that’s what you get with this genre and Shing! does at least try with those puzzles and while it did take us three days to beat the game (even on Easy), the game isn’t too long.  It is debatable that you’d ever go back to it but Shing! does at least keep things interesting with its presentation.

Aside from those cutscenes, which really do seem well drawn and animated, the graphics are generally of a high standard.  We’re so glad that they didn’t go down the usual 16-bit pixel-art route with this.  The graphics are clean, well-designed and presented in a nice 2.5D style.  The levels, in terms of backdrops, are reasonably varied and use colour well and there’s a good amount of cartoony gore.  The action is always easy to follow too, apart from moments where the screen is deliberated obscured. 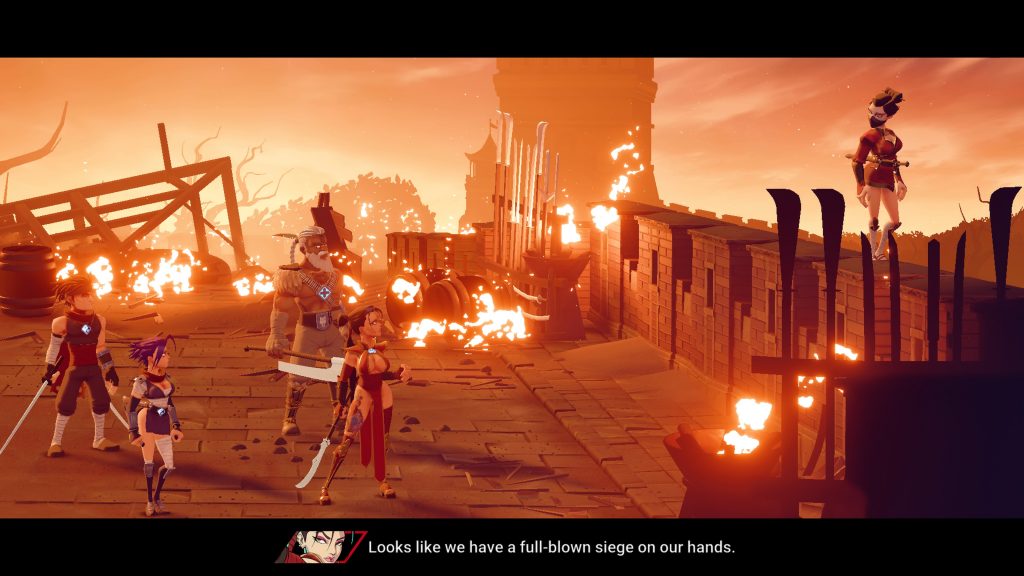 The sound is just as good with voice acting in the cutscenes and during the game and really good music.  It gives the game a nice, professional polish.  And, of course, a game called Shing! , an onomatopoeia, needs to have good in-game sound effects and this does.

There were times that we thought we might never finish thing game and now that we have, just a few hours ago, we’re glad we did.  While it is true that only the controls make this stand out from the last thirty years worth of hack and slashers, and that they might not be to everyone’s tastes, we found the controls to be nuanced enough to make this stand out and the big moments in the game made it satisfying to play.  Despite what a decade of games about feelings might make you think, games are really just about two things:  things to do and things to see, and on both counts Shing! does a good job.

If they get the online co-op implemented well, this will be even easier to recommend but if hack and slashers aren’t your thing or if the difficulty is too much, you may not enjoy this as much as we did but if you want a decent looking and playing game where you get to kill a lot of demons with swords, you can’t do much better than Shing!

Shing!
8 Overall
Pros
+ Looks great
+ Plays differently to other hack and slashers
+ Combat requires both skill and strategy
+ Good range of difficulty settings
+ Good sound throughout
+ Generous checkpointing
Cons
- Re-uses enemies a bit too much
- Boss battles can be frustrating at times
- Your right thumb might get a bit tired
Summary
Shing! is fresh take on an old genre. This arcade-style hack and slasher has an interesting control system and great presentation. It might not be for everyone but we really enjoyed it.