Oh dear.   So, here’s the thing about us at PlayStation Country.  We do champion the indies a bit here.  If you want day one reviews of the latest triple-As, we’re not always your go-to site.  But if you look on Metacritic we’re often the only site who have reviewed certain games.  It happens a lot.  Now, that’s not to big us up but rather to qualify our next point:  we play a lot of shit.

There’s a special place in gaming hell for some of these.  Games like Mastercube, the most dogshit game of all time and My Name is Mayo.  To me (let’s drop the ‘we’ thing for a second), these aren’t games.  They are insults.  They are cons.  Games made by chancers who somehow grift the system in such a way that you think either Sony are turning a blind eye deliberately or they just don’t care what ends up on PSN. 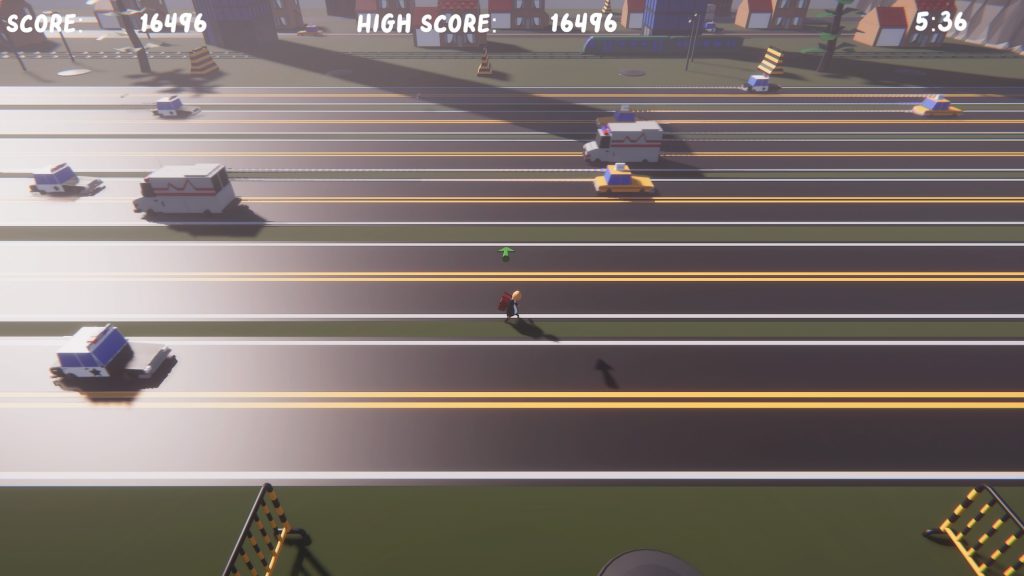 Road Bustle is one such title.  It exists for one reason only and that is to give you a ten minute platinum trophy, a task that it hilariously fails at.  But before we get into that, what exactly is this game?  Well, it’s a ‘modern’ take on Frogger, in so far as it is a game where you have to cross roads and hope that traffic doesn’t kill you.   You may well remember the mobile game Crossy Road which borrowed liberally from Frogger but turned it, cleverly, into an endless runner type of game.

Well that is what Road Bustle does.  You are faced with an endless journey where you’ll have to cross roads and train tracks in order to get as far as possible before you run out of luck or patience.  There’s not much else to it really and that’s evident from the game’s main menu.  Well, it’s barely that.  An ugly splash screen with the controls clumsily displayed in the top left and an instruction to press your Options button to start. 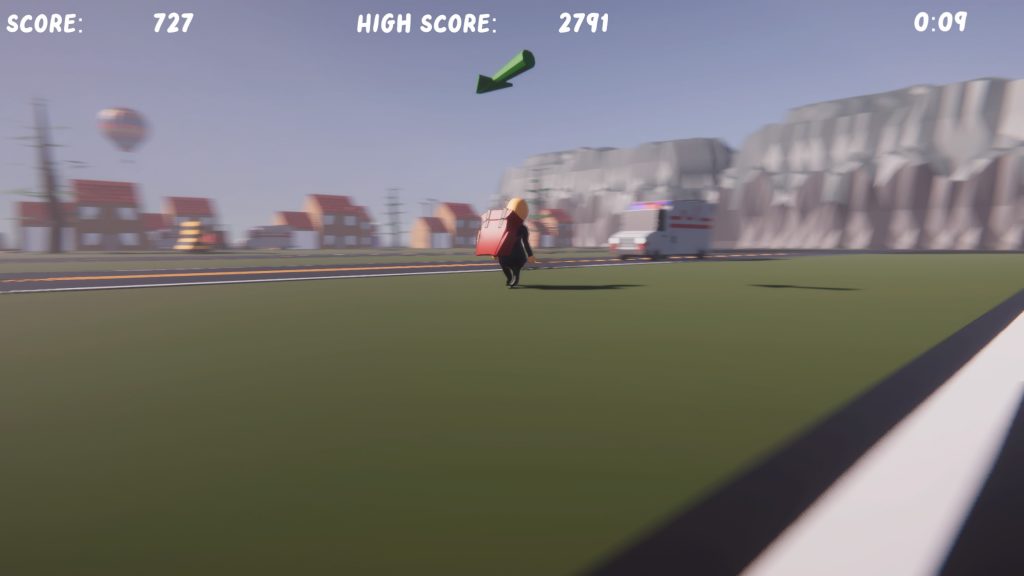 Once you do, you’ll be moving (generally upwards into the screen) with the left stick.

lets you run a little faster (with no stamina penalty),

is reserved for letting you “quit transport” and

switches your view from the standard top-down to a behind-the-character third person view which is absolutely useless.  Pressing Options just pauses and offers you the option to restart the run.  You can’t get back to the main menu but that’s fine as there’s nothing there.

In the game you’ll walk slowly onwards (or slightly less slowly if you run).  The controls are stiff and clumsy which might lead to a couple of early deaths as you get your bearings but after that you’ll find that, unlike the game that inspired it, Road Bustle requires next to no skill.  All you do is walk to the next road/track and wait for a car/train to pass.  Once it does, you’ve got a few seconds to cross over because either the cars are on a set routine or are at least always going to give you some time before they come back again. 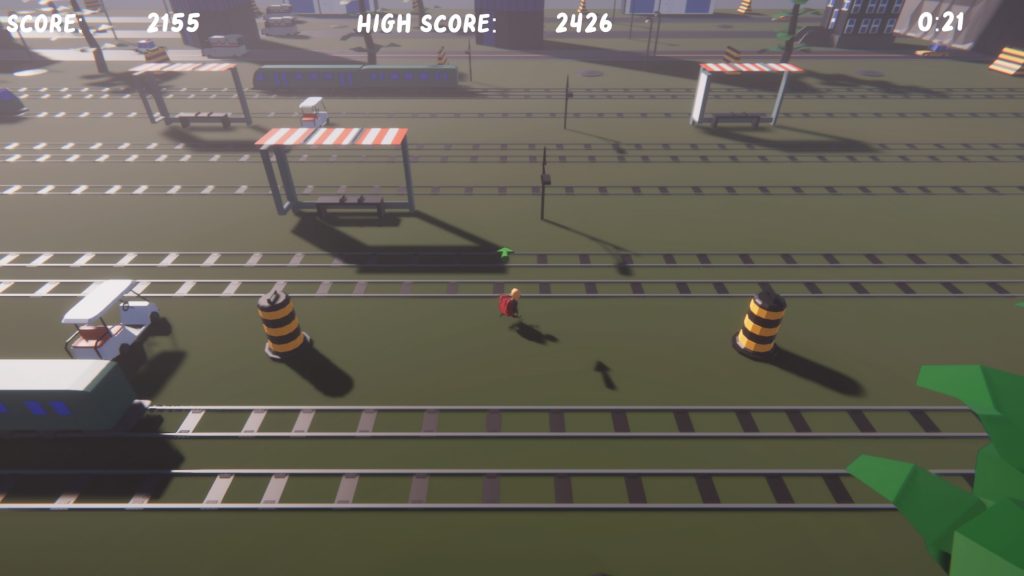 This makes it very easy to make progress.  To switch things up you can sometimes find vehicles (the “transports” that the main menu mentions) and these give you a temporary speed boost to get further faster but these don’t last long and don’t really help all that much as they can lead to a bit of complacency.  There’s really nothing else to the game.  No jumping, no firing, nothing.  Just walk forwards and avoid things that are very easy to avoid.

As we alluded to earlier, this game is about one thing: the platinum trophy.  So, it is a sad indictment of the game that even this doesn’t work quite right.  The trophies in the game are for getting various scores.  Usually at 500 or 1000 point intervals.  Get to 16000 (about five minutes effort) and you should pop the game’s platinum.  But, pathetically, the game doesn’t always pop them on cue.  We got to 16000 and found that four earlier score markers hadn’t popped their respective trophies.  This was fixed by deleting our save and going again but it does bring to mind the phrase ‘you had one job.’ 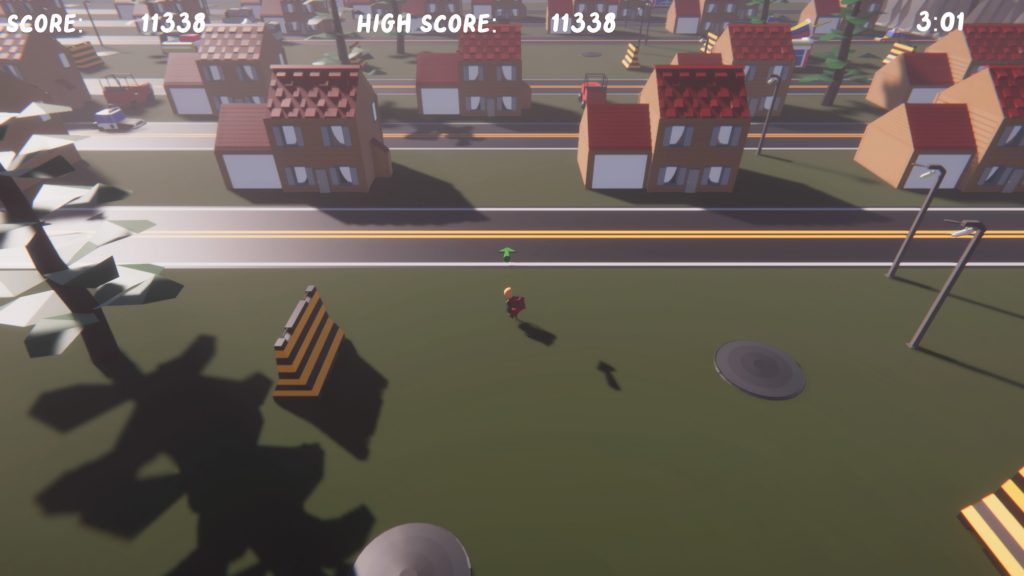 Also, and this is odd, we found that after a while, restarting the game started us at 10000 points.  A weird bug indeed and one that pretty much kills any replay value that the game might have had.  Not that it had any as it, quite obviously, doesn’t support leaderboards or anything as cutting edge as that.

Beyond that all we can mention is the presentation.  The visuals are basic and blocky as if designed by someone who doesn’t really know how to do graphics at all.  The music is odd in that it gives you basically one of three (we think) very similar tunes every time you start but these last about five seconds before looping.  Also, the game’s sound effects don’t marry up with any of the action and have the curious effect of clearly not belonging which makes you think they are part of the music, which ruins that aspect of the game too.  Indeed you can’t even turn down the music or sound effects because, as we said before, this game has no options. 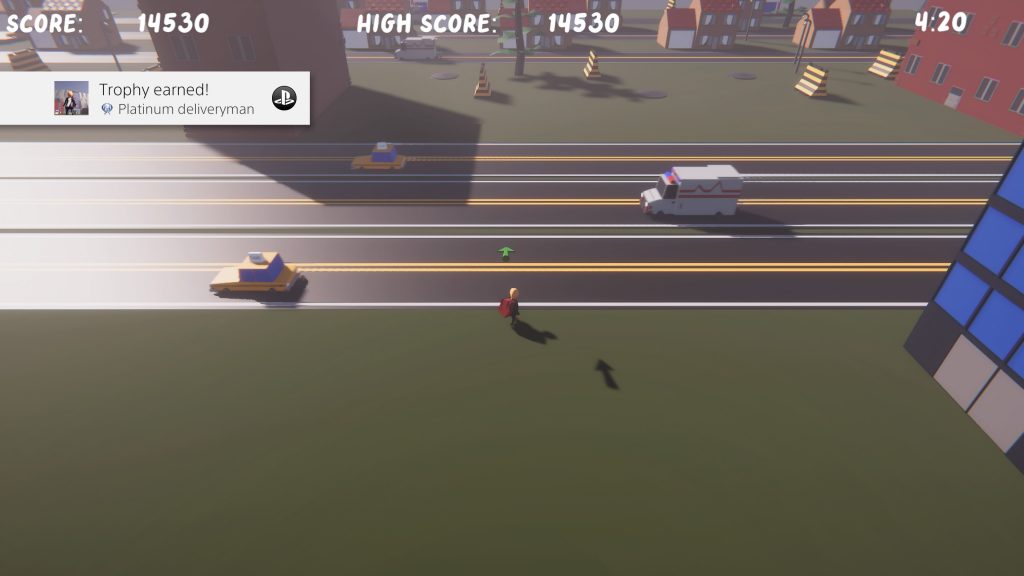 And that is that.  The only thing you can say in this game’s defence is that it is 79p and it isn’t Mastercube.  That’s it.  But when you are doing one thing, and one thing only, and you can’t even get that right it makes you wonder what Sony are playing at letting this even be on their store.  It might sound like we’re angry about it but once we hit the ‘Publish’ button on this review, we’ll likely never think about Road Bustle ever again.

Road Bustle
1 Overall
Pros
+ Is very cheap
Cons
- A bit broken
- Limited gameplay
- Slow and unexciting to play
- Bad presentation
Summary
Road Bustle is a grift at best. Some chancer made this and somehow got Sony to allow it on their store.