From iFun4all, Serial Cleaner has just released for the PS4 and casts you as the guy that cleans up after a murder scene. Not legally, we’re talking the “Yo I just killed, come clean it up and get rid of the evidence and I’ll pay you” kind of cleaning. The cleaners from the film John Wick are an example used by the devs. 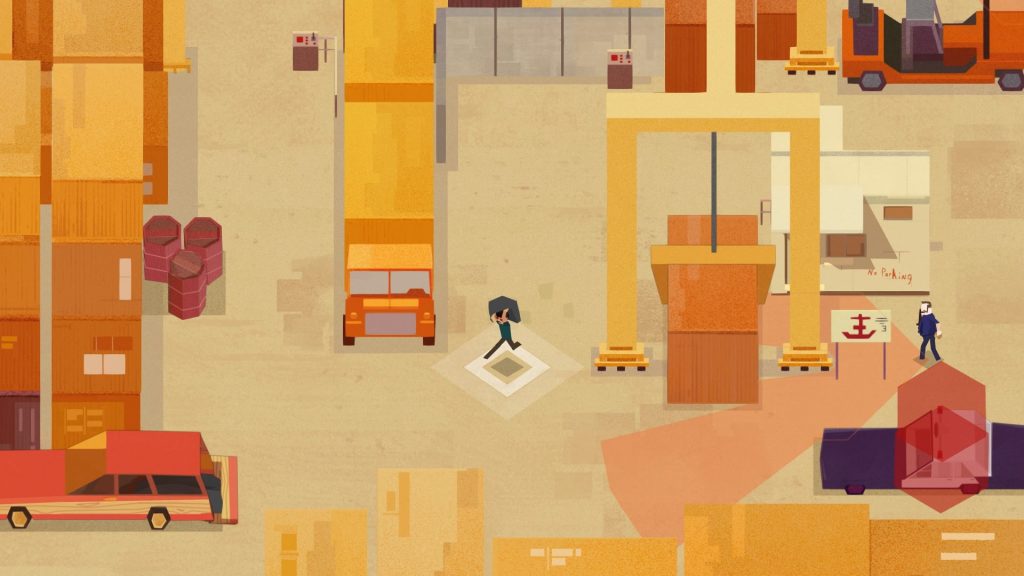 Set in the ’70s and viewed from a not quite bird’s-eye viewpoint there is a decent bit of story to set up the levels. You live with your mum and answer the phone to receive jobs. You can also check the television, radio and newspapers to get a feel for both the story and time period. They aren’t massively intrusive but do add more flavour to what would otherwise be level after level. As the story comes to a head there is a bit more pay off so I understand the inclusion just don’t go in expecting it to be too story heavy.

Once into a level it becomes obvious what type of game you’re working with. The cops are already on the scene and have marked the bodies and any weapons/evidence, you’ll need to sneak in and remove them all and clean up any blood with your vacuum cleaner before escaping. You’re given quite a few tools to work with that make this, at least initially, quite a forgiving game.

All the police have vision cones on screen at all times so you know where you can and can’t go, as you move around a diamond expands around you signifying the noise you’re making, you have your ‘Cleaner Sense’ that lets you view the whole map to plan where you need to go and your route, plus the levels themselves provide hiding spots, noise making items (radios, etc.) for distractions, shortcuts and movable objects which can change patrol paths. 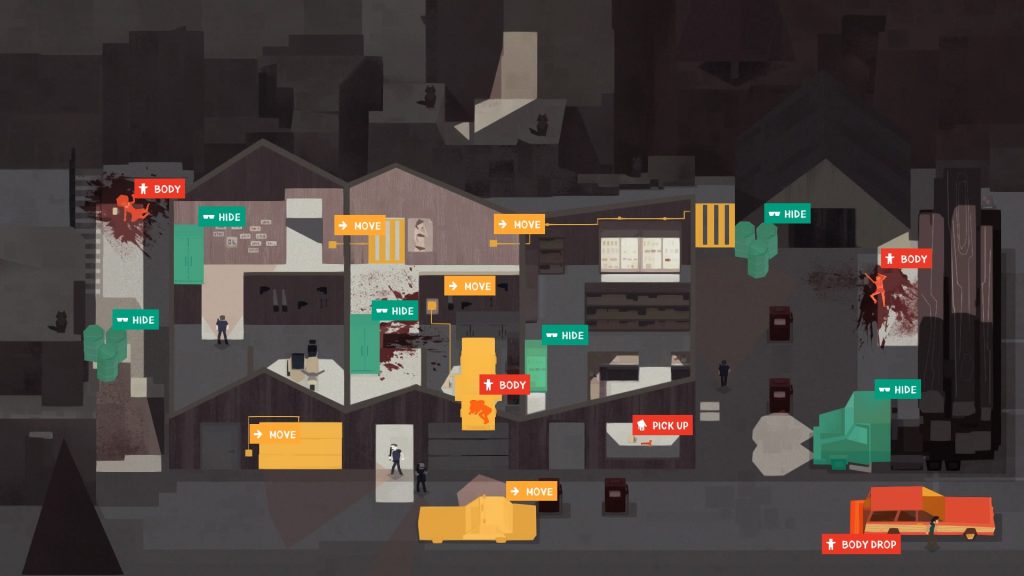 Ideally you’d be in and out without being spotted but the game is quite lenient so even if you’re being chased you can run into a hiding spot and the AI will return to their routine very quickly. It’s not realistic but it works as a game. Different police officers act differently to add extra wrinkles to the gameplay, like some having erratic pathing or some blowing a whistle to draw others towards him and hopefully surrounding you.

If you do get caught then you’ll notice that the positioning of evidence and bodies are slightly randomised meaning a level of improvisation will be needed and you can’t just repeat the same actions over and over again expecting success.

To complete the level you need to retrieve all evidence and dispose of the bodies, either in the back of your car or using an in level interactable like an alligator or piranha tank. You will also need to remove a percentage of blood from the level (usually 60-80% but there is a trophy for 100%-ing every level) before you can escape. The cleaning up of blood is actually quite exacting with seemingly every pixel needing to make contact with your vacuum, the game doesn’t give you too much leeway though I managed to get a decent technique down. 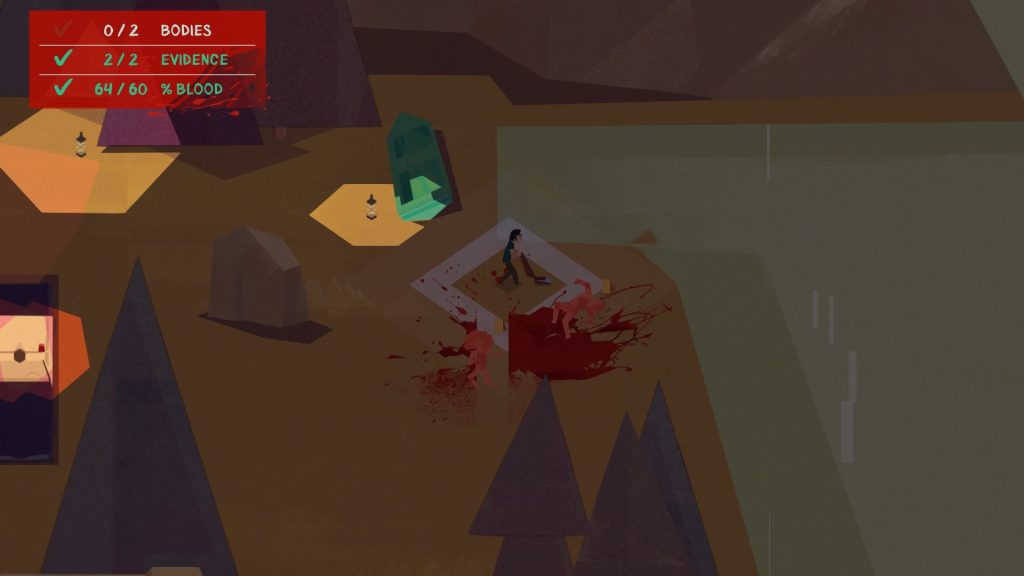 There is also a collectable in each level which either unlocks a new outfit for the Cleaner or a bonus level that’s based on a famous film scene. For the price the game is actually fairly generous with its content. Early on I thought I was blowing through it but the game continued for longer than I expected plus the bonus levels on top and you have challenges that make the levels harder, from removing the vision cones to not letting you hide if you’ve been spotted.

Before I close out the review I should also mention the games design which is excellent. There is a craft paper style to the visuals that’s very attractive and it sells the ’70s era well, but the star of the show is probably the soundtrack which is period relevant and luckily very good as if you get stuck on a level then you’ll be hearing each track for a long time. 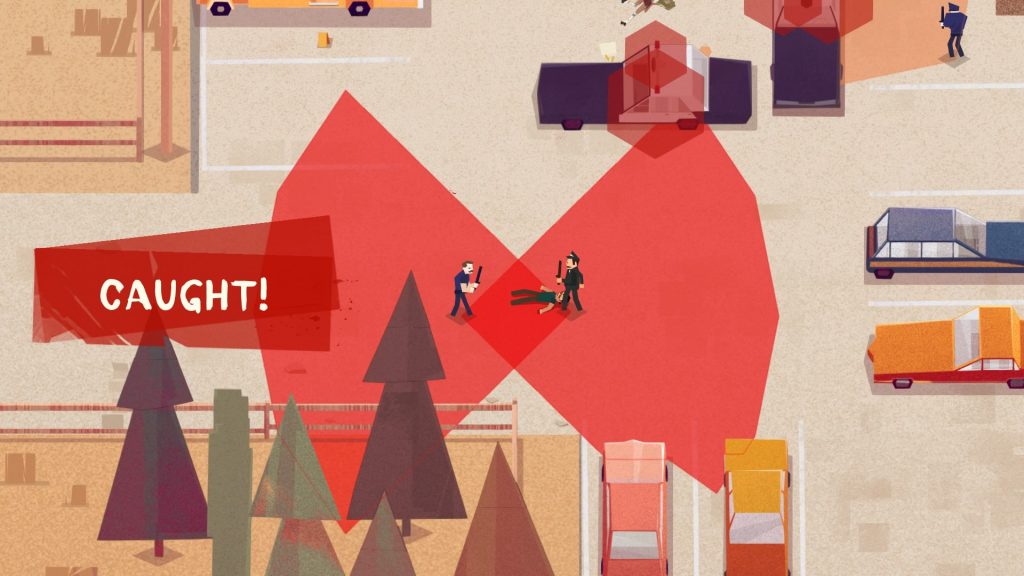 Serial Cleaner offers a fun stealth game with bite sized levels and, initially, forgiving gameplay that can be made harder with the challenges if you’re feeling saucy. There is plenty of content for the price and the unique premise, style and music make replaying the level for the umpteenth time less frustrating than it could have been. If you’re a fan of sneaking about then you should definitely check it out.

Serial Cleaner
8 Overall
Pros
+ Great presentation
+ Plenty of levels
+ Is generous with the gameplay mechanics
Cons
- Failing requires you to start the level from scratch
- Could sometimes get caught on the environment
- Cleaning up blood can be too precise
Summary
Serial Cleaner brings some strong design and '70s style to the unpleasant business of cleaning up murder scenes. The game gives you all the information you need to successfully sneak your way through the many levels and if you feel like making things more difficult you can tackle the challenges. Stealth fans should check it out.