I’ll be honest, I’ve not had a good time with Road Rash homages. Pixel Dash Studios and EQ Games’ Road Redemption is probably the one I’ve had the most exposure to but now I have a chance to play it. It’s been out on the PC since last year and it’s been relatively well-received by fans, if not entirely loved by critics. 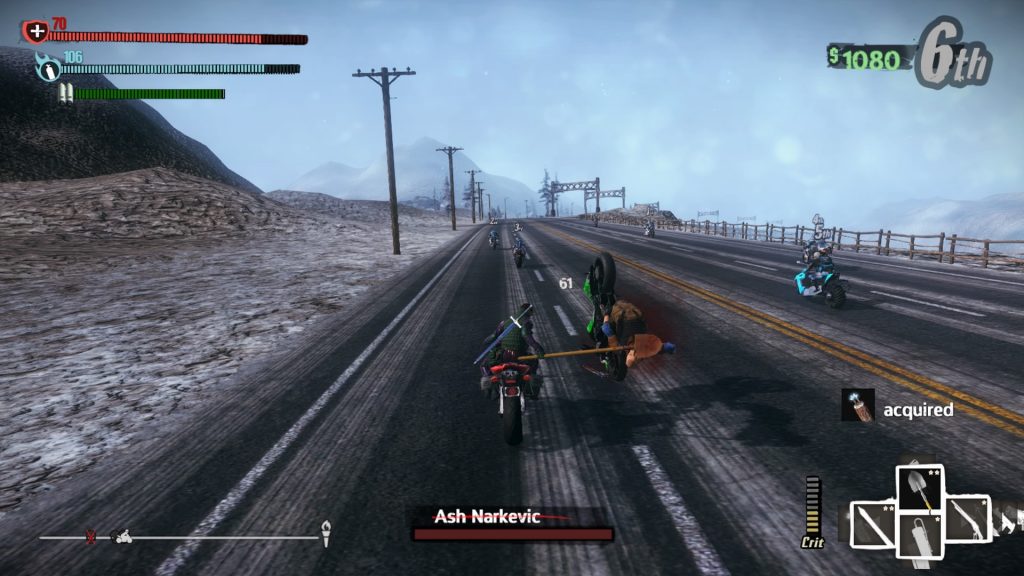 Road Redemption‘s campaign is an hour long, roguelite experience. The setup involves a cross-country race for a bounty. Meanwhile, you’re in pursuit of other gangs who are also after the gigantic cash prize. It’s paper thin but, at least you’re given context for the coast-to-coast expedition. At heart, it’s a very arcade experience of short bursts that’s paced surprisingly well.

Throughout your run, you’ll face several brief event types. They all take place in point-to-point fashion with races tasking you with hitting the front of the pack. Takedowns ask you to eliminate a number of competitors, Survival and time trials pit you against the clock. You’ll see these few repeat and, whilst the length of the levels are short, it can be draining to see the same event repeated so often. The same goes for the environments which, rooftops aside, all take place in long, winding roads. 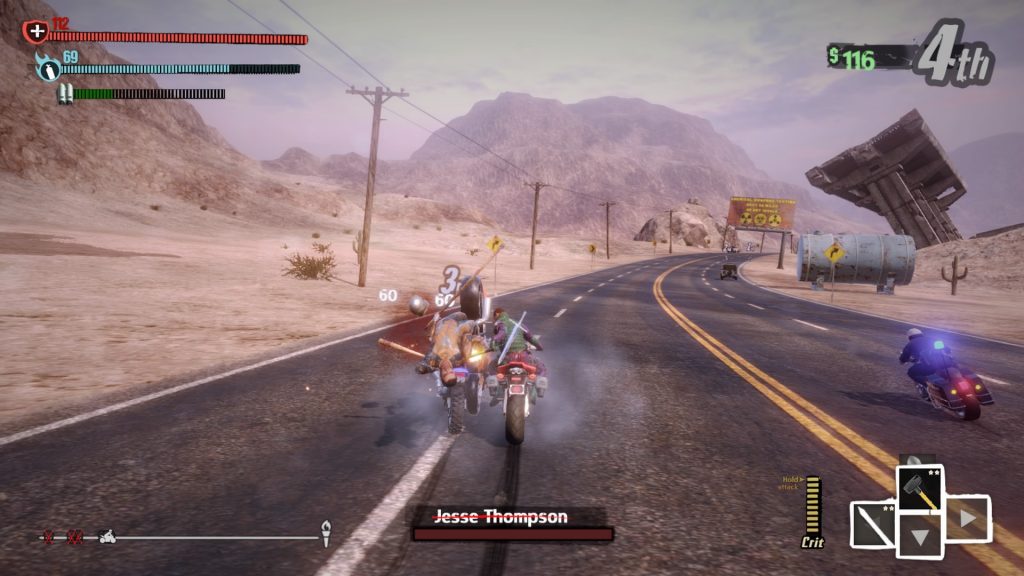 Events prominently involve combat of some sort.  You have melee weapons to devastate your opponents. Eliminating enemies feels satisfying and gains you experience, money, nitro and health. These rewards encourage you to take on more riders whilst also looking to achieve the level goal. As you progress, you gain more weapons and some are more suited to destruction than others. I find explosives to be essential at taking out vehicles and bosses quickly. Swords allow for decapitations and help disable shields. On top of this, you can deflect incoming attacks and kick out at riders as defensive options. The latter allows for some potential carnage as riders can crash into fences, oncoming traffic or each other.

There’s depth to the combat which is nice to see. I find it compelling to switch on the fly to try and maximise experience and cash hauls from each level. The only weapons I tend to avoid using are firearms. Aiming whilst on the move is always going to be tricky and lining shots up can be infuriating. Maintaining speed and direction is also a challenge so using guns becomes something of a last resort. 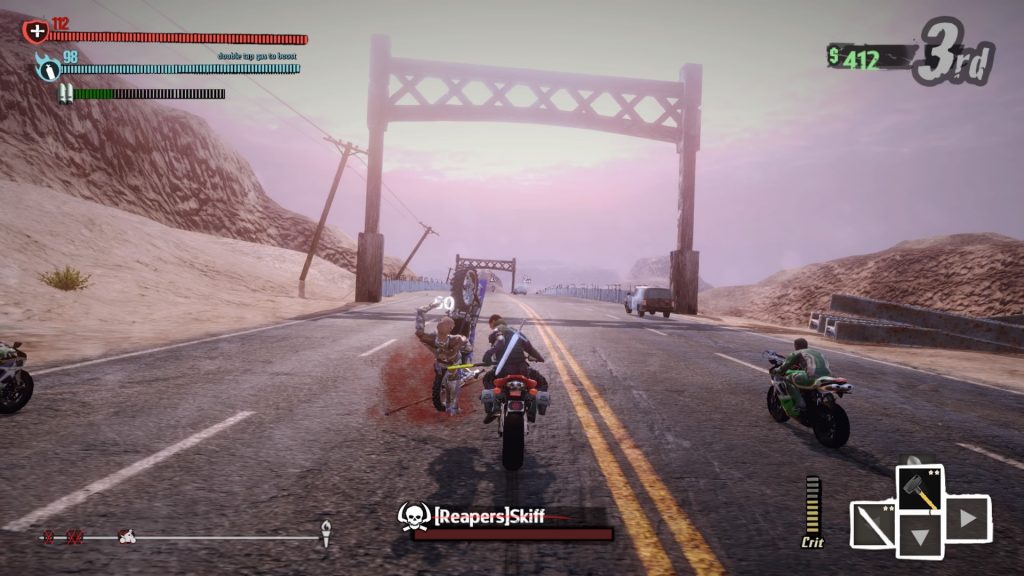 Bikes handle well. They hold the road nicely and steer responsively. Different bikes have different properties and all of them have access to nitro boosts. You always start races at a deficit and have to spend or gain some just to catch up. As the events get shorter, you’ll come to rely on nitro more and being without can be a problematic experience. This boost is triggered by double-tapping the right trigger. This can create problems when trying to get back in the fray. The window for the double-tap seems fairly wide and you can find yourself activating it in error.

I also have trouble with Road Redemption’s physics. It’s inconsistent as some collisions lead to a dead stop, a minor bump or you wildly ballooning off course. You have the option of a quick reset but the dreaded Hallucinogenic Chemical Zone events can see you backing off for fear of a stray car murdering your run. They’re rare but they highlight just how potentially wonky contact can get.

Between events you can get upgrades to health, nitro and weaponry. Stat boosts are on offer as well and, whilst the shop stocks are randomised, there’s always something to spend money on. The rider you chooses has different properties and they unlock as you progress to new areas. This sense of progression is compelling but it takes a little too long to get going. At the end of each run, you can bank the experience you’ve gained towards permanent upgrades. Unfortunately, experience doles out slowly and it can be time consuming to gain a foothold in the tech tree. When it does finally pick up the pace, it’s satisfying but you need a good run to get off the ground. 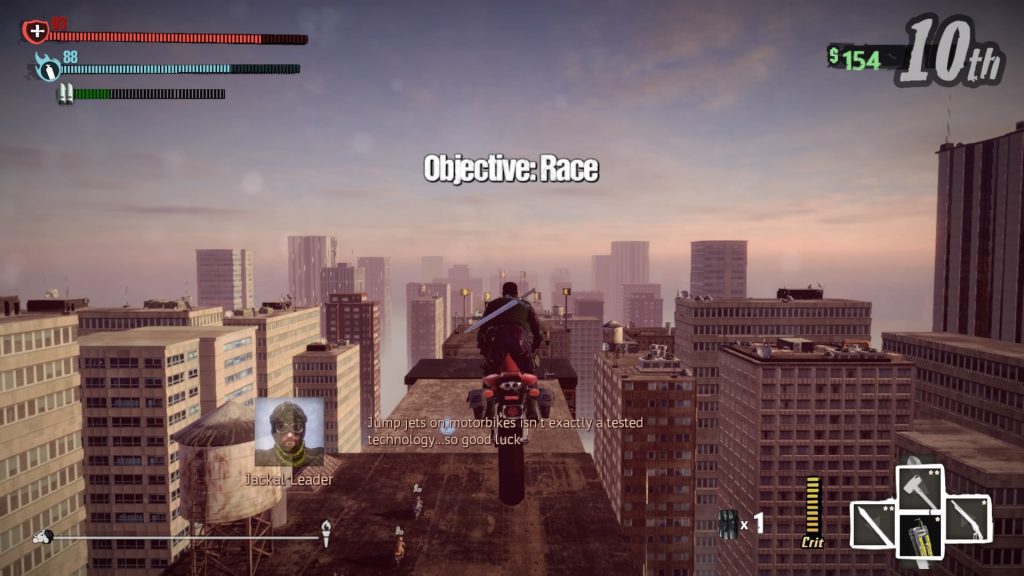 Elsewhere you can venture into Quick Play which presents the tracks as standalone events. You can complete these for medals and, to be honest, it loses the appeal of the more persistent Campaign. You can tackle these with others but competitive play loses the rubber-banding the AI provide. It does give you an opportunity to learn the tracks and find shortcuts but, it all seems a little hollow.

Still, there’s something to Road Redemption that keeps me coming back. Runs are short and, once you’re past the slow opening, you come away from each attempt with something new. Combat offers some depth and, to be honest, the roguelite structure helps keep this game from wearing out sooner.

Road Redemption
6 Overall
Pros
+ Combat feels satisfying and has some depth to it.
+ The upgrade tree always gives you something to aim for.
+ Bikes handle well at speed.
+ The roguelite structure keeps the game's pacing up.
Cons
- Some events become too short to accomplish.
- Physics can be very unpredictable.
- Quick play feels hollow compared to the campaign.
- Very limited number of tracks, environments and event types.
Summary
Road Redemption's combat offers options and the roguelite structure helps give the game a little more life, despite the limited tracks and environments. The physics present some wonky moments and some events are too short for their own good. Still, the upgrades always manage to give you something to chase, even if it's a slow, frustrating start.