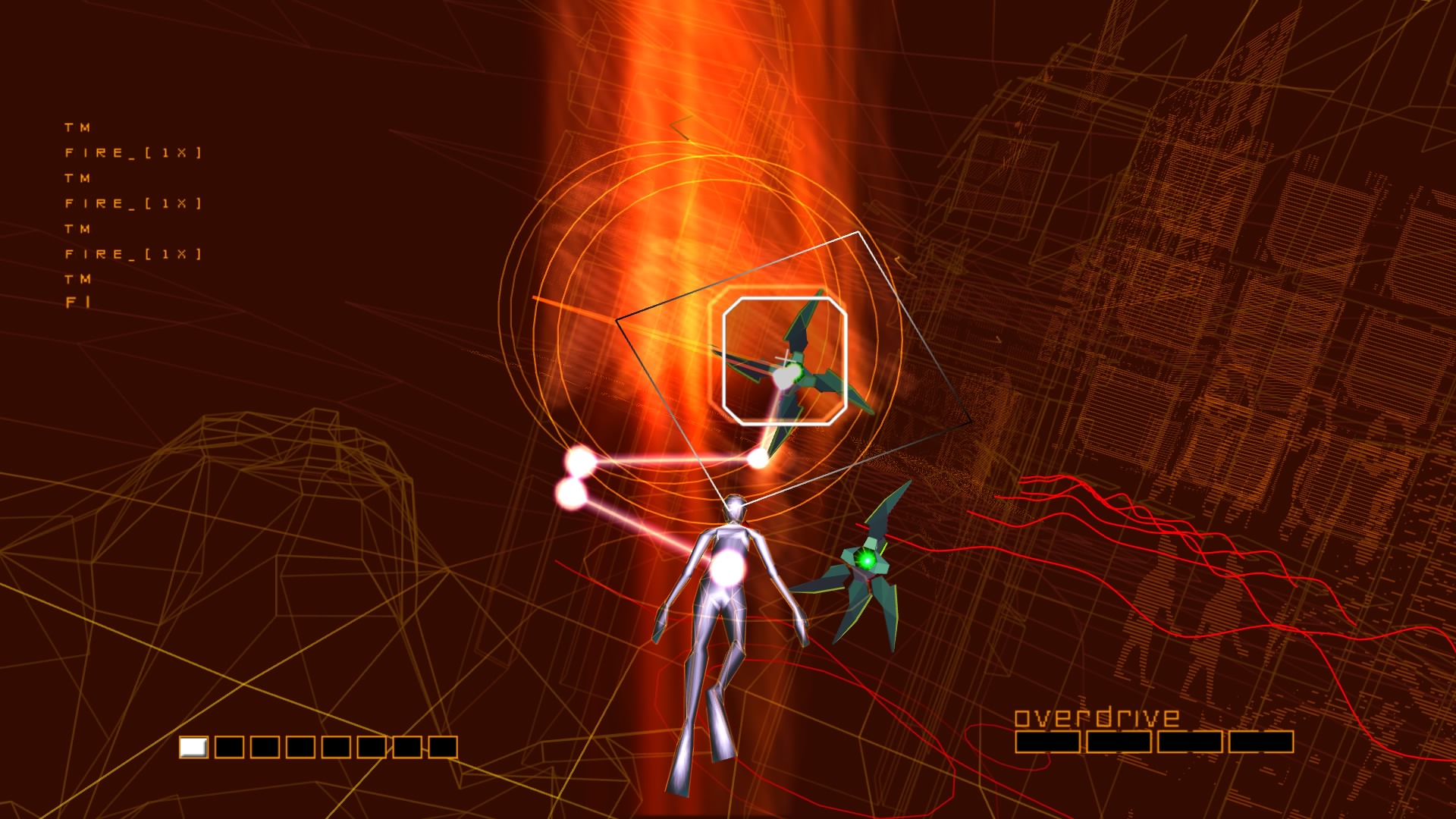 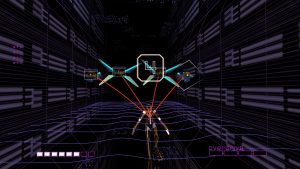 The cool kids all know what’s up.  In its short life the Sega Dreamcast burned brightly, satisfying gamers who were happy to take a chance on its relatively limited software library and arcade-based hardware.  It was home to some of the best games of its generation and Rez was one of its crowning glories.

Much like the hardware it was played on, Rez was short-lived but oh so sweet.  It fused what was essentially an on-rails shoot ’em up with some gloriously sleek and beautiful visuals, all married to a soundtrack that was so perfect that to this day people still think of Rez as being a music game.  It’s not rhythm action, even if you do find yourself tapping out hi-hat rhythms with your shooting button, and music plays no part in the gameplay but it still felt essential to the whole experience.

It lasted for five levels, none of which outstayed their welcome, and when it was all over, it left fans wowed at what they had experienced.

Rez came back a generation later on the Xbox 360, renamed Rez HD, with an excellent hi-def port that improved on Dreamcast perfection and added a few extra modes just to keep you interested and it showed that, more than a decade later, the game had lost none of its charm.

And what a lot of charm it has.  The game places you inside a computer system and has you floating ever forward.  As enemies come into the play area, you hold down X and sweep your targeting reticule across them.  This locks you onto the targets and as you release X, you’ll shoot up to eight shots.  Survival is just a matter of taking them out but high scoring requires that you try to get those eight lock-ons before you shoot, maximising your scoring multiplier. 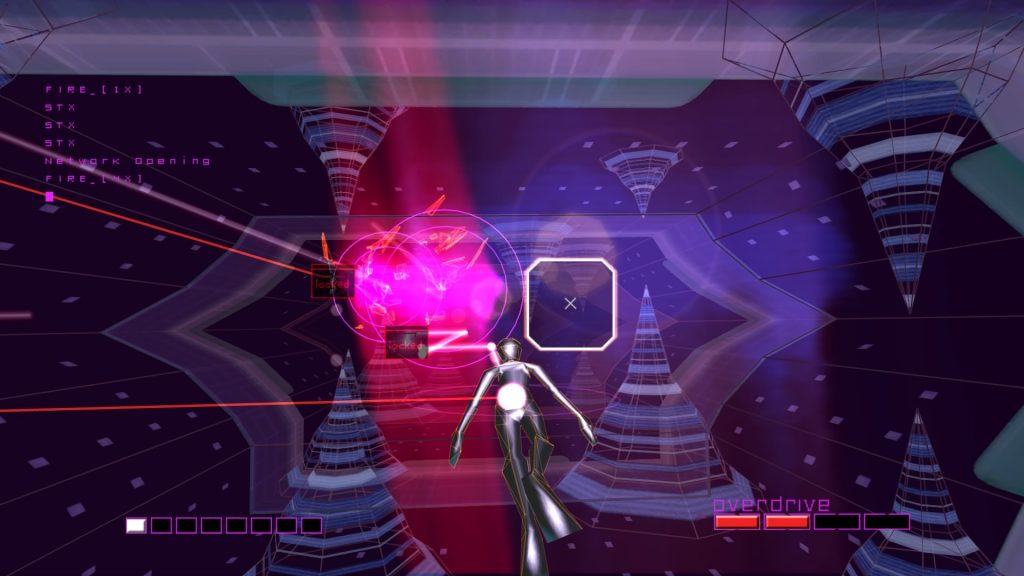 As you float ever onwards through the elegant visual landscapes, the game gets ever more difficult and dangerous and punctuates each level with a boss battle.  These are epic affairs with the enemy AI throwing its last gargantuan effort at you.  The later levels in particular have some breathtaking moments that certainly blew my mind back when I played the Dreamcast original and it still had a big effect on the Xbox 360 and combined with the stellar soundtrack, Rez somehow managed to attempt and succeed at the whole ‘games as art’ thing but crucially remembered to put the gameplay first.

Now it is back again in the form of Rez Infinite.  Essentially the same game as Rez HD but now with two crucial additions.  Area X is a new level, selectable from the main menu (rather than being structured as a sixth level) and while it still fits into the overall look and feel of Rez, it does make a few changes.  Firstly, the visuals are now a little bolder with all the structures having the likelihood of bursting into firework displays of pixels and now rather than travelling on rails, you actually have back and forward control and can move around the area in 3D space. 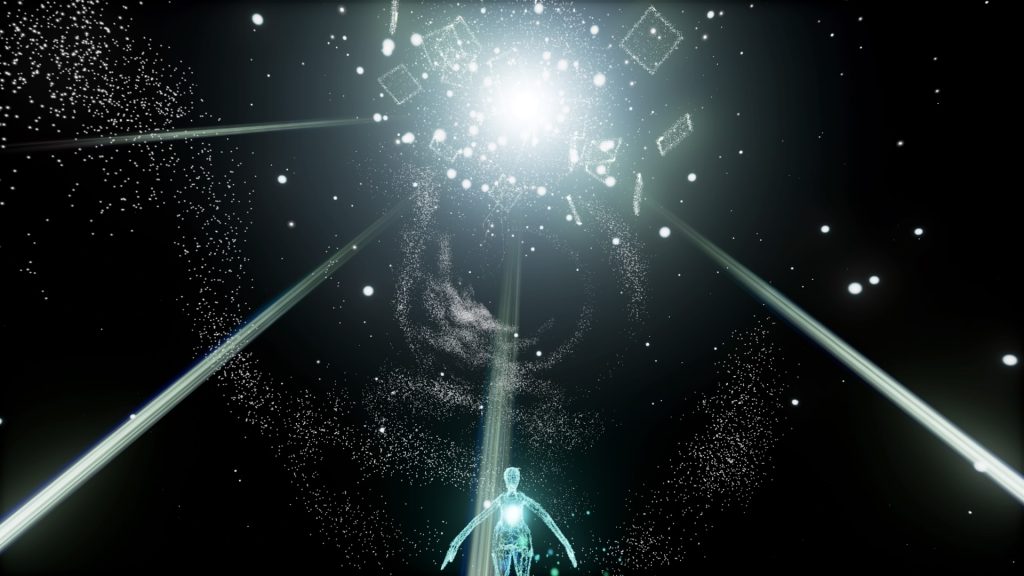 Clocking in at just a little shorter than a couple of normal Rez levels, this area fits in perfectly with the aesthetic that was created in 2001 but brings it up to date.  The accompanying music track being more brooding trance music until the female vocal kicks in.  It almost veers into the same bullshit music that we saw in Child of Eden but just about stops short of letting the vocal ruin the whole thing.  Anyway, that’s personal taste and you might like it.

The other new thing on offer, and definitely the most important, is the fact that the game supports PSVR.  Consider that for a second.  Imagine being inside Rez.  Jesus.  Well that’s what you get here.  You are literally floating through the five classic levels (and Area X) and it is glorious.  The best way to explain the effect of it is to say that after beating the game (in one sitting because I’m a veteran, and also because VR makes it a tad easier), I went back to TV mode to get some hi-res screenshots and playing it on a 42″ TV feels like playing it on your first 15″ portable after playing in VR. 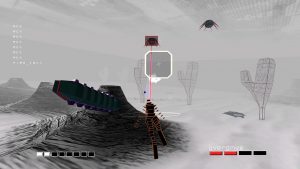 It feels like Rez was almost designed with VR in mind.  It looks stunning and it plays even better than it ever did before.  Pump those tunes directly into your skull with some headphones and you’ve got the best VR experience available.  And God help you if you’re coming to this fresh, because this might blow your mind.

Now I admit, I’m a proper mark for this game.  I love Rez, I love VR.  But truly, the addition of Area X on top of the original, brilliant game just settles it.  The best has honestly gotten better.

Rez Infinite
10 Overall
Pros
+ Rez still offers one of the most memorable gaming experiences ever + Excellent visuals and music + Area X is a great addition + The game PSVR was surely destined to play
Cons
- Quite a short game - Yeah, I'm struggling for cons
Summary
Rez Infinite improves on perfection. The best reason to own a PlayStation VR headset.