One of the luxuries of this job is seeing a developer’s first crack of the whip. Warpfish are a two-man effort from Lancaster and Razed is a challenging platformer looking to add speed and pit the clock against you. And shoe puns. Lots of shoe puns. 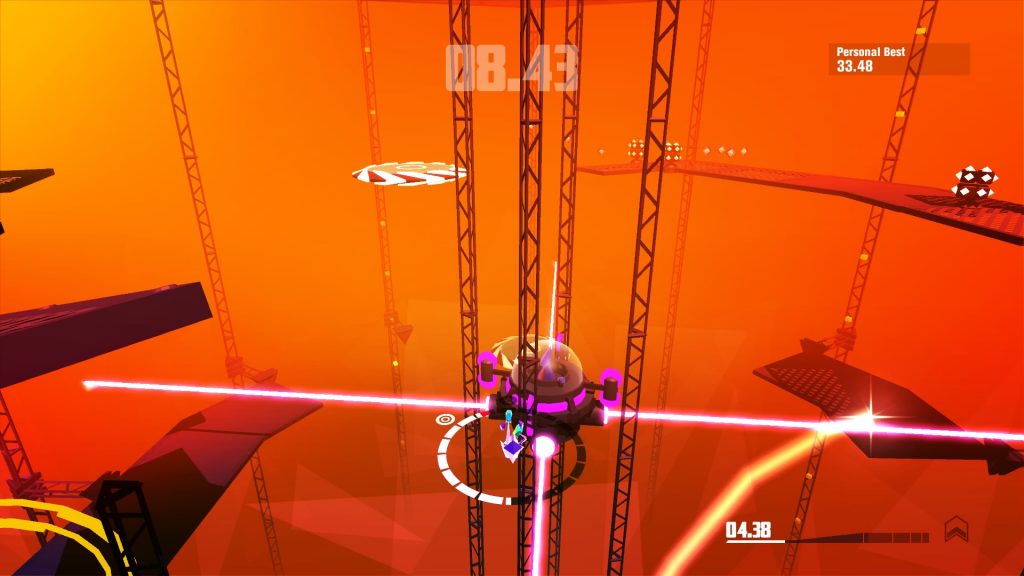 Razed is a speed-focused platformer much like SEUM: Speedrunners from Hell. You navigate half-a-dozen blocky, 3D levels looking for a precise, quick route through them using abilities that you gain along the way. These abilities tend to favour traversal. You have a jump to bridge gaps, a drift to manage tight corners, stomps to trigger environmental obstacles and a few more that all have their uses.

The story beats are light and simple. You’re a nameless runner who’s been landed with a pair of mischievous, sentient shoes. The developer seems focused on destruction and your shoes are wired to explode, if you don’t keep your speed up. They’re constantly on a diminishing timer and, as a player, you’re tasked with maintaining boost to keep yourself alive.

This resource management provides the game with an intriguing time constraint that factors into Razed pretty heavily. Your abilities cost boost and you regain boost by collecting pips scattered around the level and by running on a flat surface. Boost influences level design quite well. Overall, they’re linear but the pips provide an enticing breadcrumb trail to point you in the right direction. I don’t see many opportunities for levels to branch but the focus on execution makes for a compelling experience. 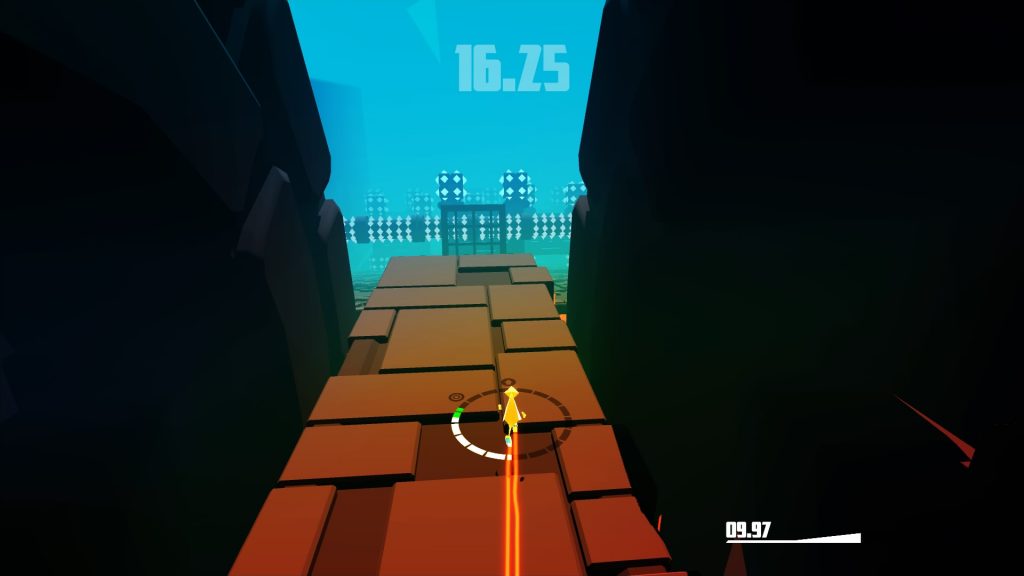 Controls are responsive and consistent enough not to falter. Movement is tight and your abilities act as you’d expect. Drifting requires a bit of foresight but the other abilities can be triggered as late as you need them. Razed requires a precision from you which is rewarding to reach. Levels are usually short which makes repeating them not feel as bothersome. Boss levels are the exception. These are a lot more involved and hazardous. They do feel like graduation tests and you’re usually granted a new ability after beating a set of levels.

The following world introduces you and focuses around your new skills. Sometimes multiple skills are tested but, you’re not juggling them as often as you’d think. It does allow you to concentrate on your route and keeps your mind clear enough to hopefully progress past tricky sections. If all else fails, you can skip three levels in each world. Success is rated with a ranking system and you can find upgrade collectables to improve your different abilities. You have reasons to go back and returning to previous levels with new abilities can help you traverse them more efficiently. 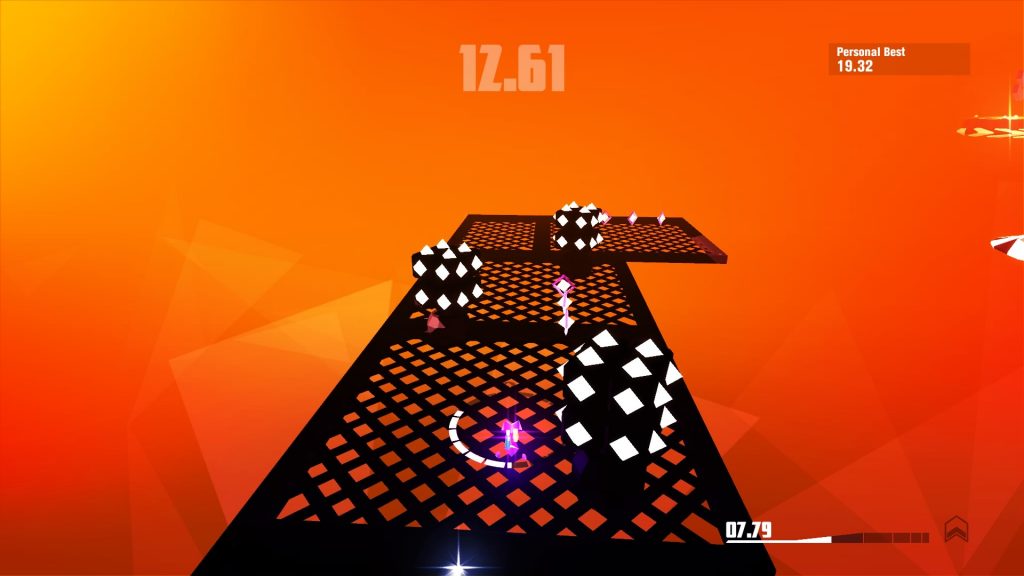 If there’s one thing about the levels I’m disappointed by, it’s the look of them. Each world tends to favour a change of colour rather than a drastic change of scenery. The final world looks ominous but, for the most part, you’re barrelling through the same blocky universe. Also, for a game focused on speed, it never reaches an intensity on the brink of losing control. It feels a touch reigned in and pedestrian.

If nothing else, the functional appearance does help you remain fixed on the road ahead. Presentation is simple and clean but, like the story, it’s not laden with that much charm.  At least, charm that doesn’t stand up to scrutiny after repeated level attempts.  The soundtrack doesn’t stand out much with a predictable synth score. There’s a single music track for each world so you’ll hear a lot of it. Being frustrated by a level might cause it to grate.

On the technical side, I’ve seen the player character be snagged by geometry a few times. In special cases, I’ve found myself stuck and had to restart. Thankfully, it’s a quick process but there’s definitely some instances where you learn to avoid problematic obstacles. Other than that, there’s a couple of eccentricities to your movement which stifles my runs. Having your feet planted is crucial to building boost but you find landing from a jump or hopping down stairs produces a little combat roll. It’s consistent so you can plan around it but there’s a sense of lost momentum. 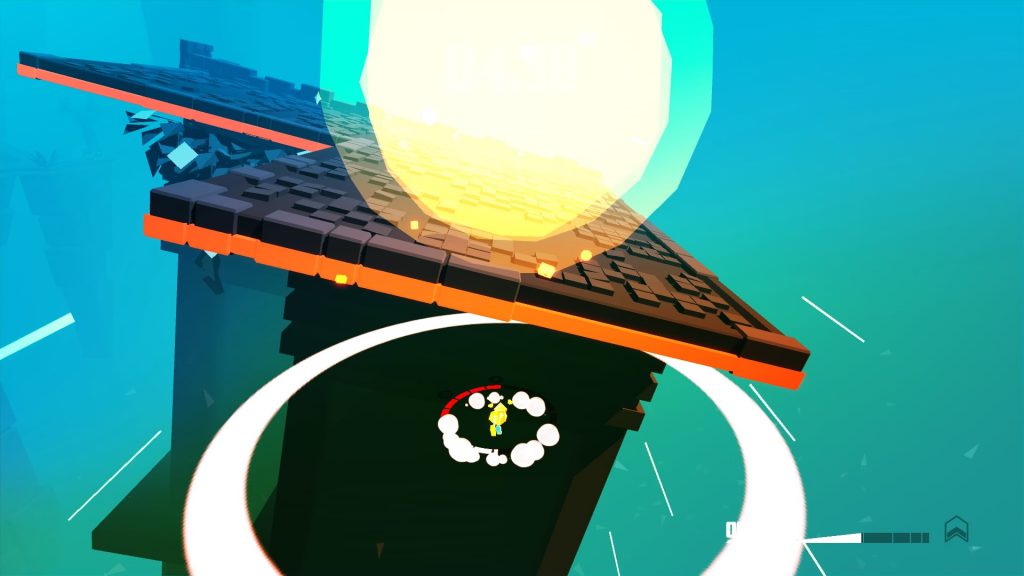 This aside, the repetition of failure hasn’t got me too down. There’s definitely a sense and a consistency with Razed that leads you to one more run. I found myself venturing further into levels and reliably finding my way to new pastures. When I hit a wall, I’d return the next day and beat it with a fresh mind. It’s certainly something you have to come to terms with but the brief nature of the courses mean that success is usually in sight, if not in reach. It’s a tantalising quality that manages to keep me interested.

Razed
7 Overall
Pros
+ Tight, responsive controls.
+ The time constraints add a sense of persistent pressure.
+ The challenge seems well-pitched and not too heavy-handed.
+ Short levels mean success is always within reach.
Cons
- The bright visuals start to lose their shine after a while.
- One music track for each world can start to grate.
- Collisions with geometry can feel a little wonky and halt your progress.
Summary
Razed's colourful block worlds might not turn many heads but the challenging, short levels are engrossing to try, try and try again. There's frustration along the way but the consistent controls mean failure is usually down to you. It's by no means masochistic and the time constraints do keep you under some pressure to succeed.