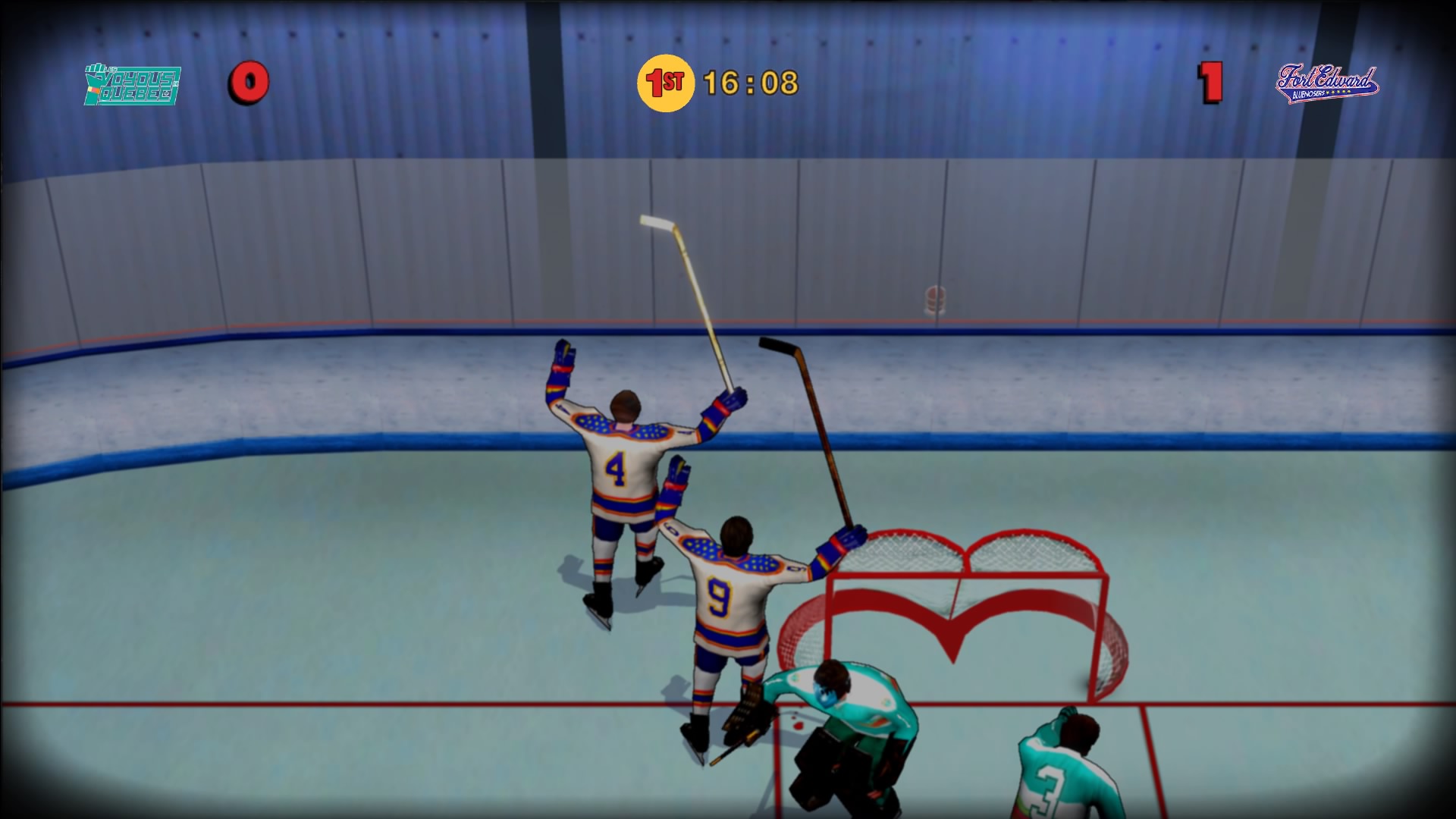 EA’s monopoly on the ice has found itself some unlikely competition in V7 Entertainment’s Old Time Hockey. As the name will tell you, this game has nostalgia at its heart, trading on big hits, big personalities and a simpler time of rugged, fast and frantic exchanges. Can it survive its own pace or will it be delivered straight to the penalty box? 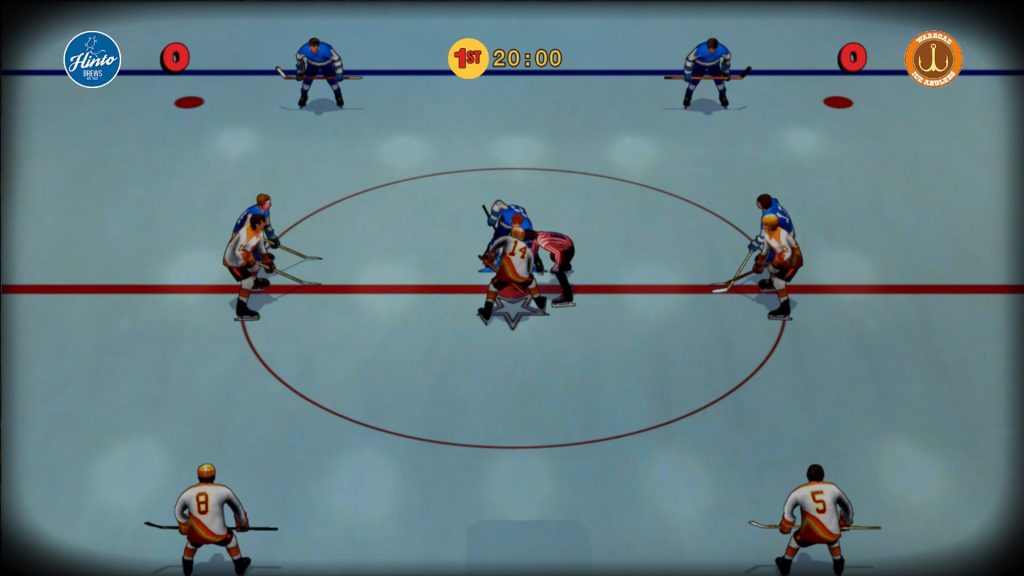 I’ll make this clear: I’m a newcomer to the sport. With that revelation comes a certain perspective which might not deliver the hot takes you’re after. That said, I’ve had all the trials and tribulations of dealing with control schemes coupled with understanding some of ice hockey’s finer points. At times, it has been a struggle but, I’ll try to remain subjective and level-headed. Honest.

I’ll give Old Time Hockey‘s presentation the respect it deserves. It pays a damn fine homage to the good old days with a smart, retro broadcast filter that gives the action a very 70’s look. I might be British but I’ve seen enough American TV of that era to know the weird, granulated aesthetic that gave shows across the pond a look of their own. It’s coupled with a commentary that does it’s job well although it’s keen to repeat itself.

It continues strongly with a perfectly pitched soundtrack featuring novelty efforts that wouldn’t feel out of place being blasted out on an arena organ. There’s an atmosphere and a style it nails and it’s commendable to see that aspect delivered well by a small team. It certainly portrays a product born from a genuine misty-eyed reverence for the sport’s history. 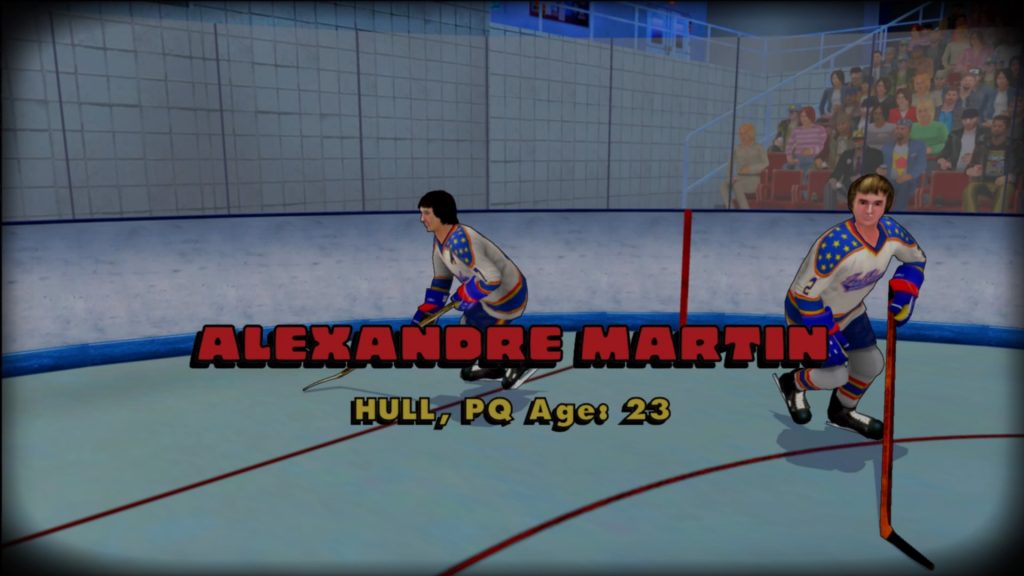 Unfortunately, things tend to slip up on the ice. Again, I’ll stress I’m a newcomer and it’s going to be tough to decipher what’s down to my own failings and what is due to the game’s design. There are just two modes on offer. An exhibition mode gives you to the opportunity to try out the fictional teams of the Bush League. You can compete against the AI or team-up (or battle against) a buddy in local multiplayer. There’s no online which might be a problem for some. Given how few modes are on offer, this omission might feel magnified.

The Story mode offers play with a bit more focus. You inhabit the league’s bottom feeders. Your boys in white and blue arrive with a horrid record and absolutely no skills to speak of. Zero. In the absence of results, you’re tasked with completing objectives during matches to bolster your roster’s minimal talents. As a guy that’s struggled to make some actual, tangible progress, this mode at least gives me something simpler to focus on. Completing objectives provides a barometer for my improvements. 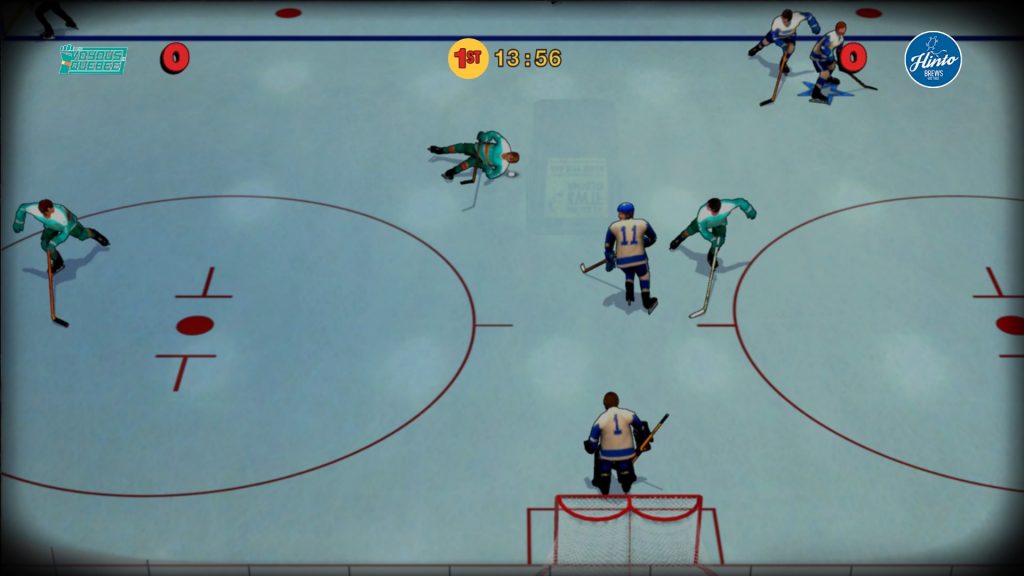 Old Time Hockey allows you plenty of control options from the simple two-button scheme to the more advanced methods showcased in the story mode. What I find startling is that the advanced setting is locked out in Exhibitions. If you fancy using the time getting to grips with that, playing friendlies is not an option. It will unlock after progression with the Hinto Brews but I find it baffling they’d give us that restriction.

The actual matches are where the game’s at it’s most contradictory. I wasn’t fooling anybody. When the game suggested Rookie difficulty, I took that advice with both hands and, despite this, I’m still daunted by it. Passing and hitting feels satisfying and there’s a responsiveness on offer that feels right. Switching players seems a little less predictable. I find myself caught short whenever I need to switch to someone in a hurry. It weakens my already perilous defence and, when it comes to shooting, I find that keepers (including your own) make themselves big and deliver successful shot-stopping. I’m trying not to be too hard on Old Time Hockey‘s bread and butter but I’m honestly not feeling the action on the rink. There’s a slick pace to it but certain aspects just feel a little wayward.

I’ve been looking at the leaderboards and, at the time of writing, there are only two players who have posted winning records. That suggests other players are reaching the same wall I am. It’s tough and, the more I suffer, the more the fantastic effort presenting the Bush League ceases to matter. 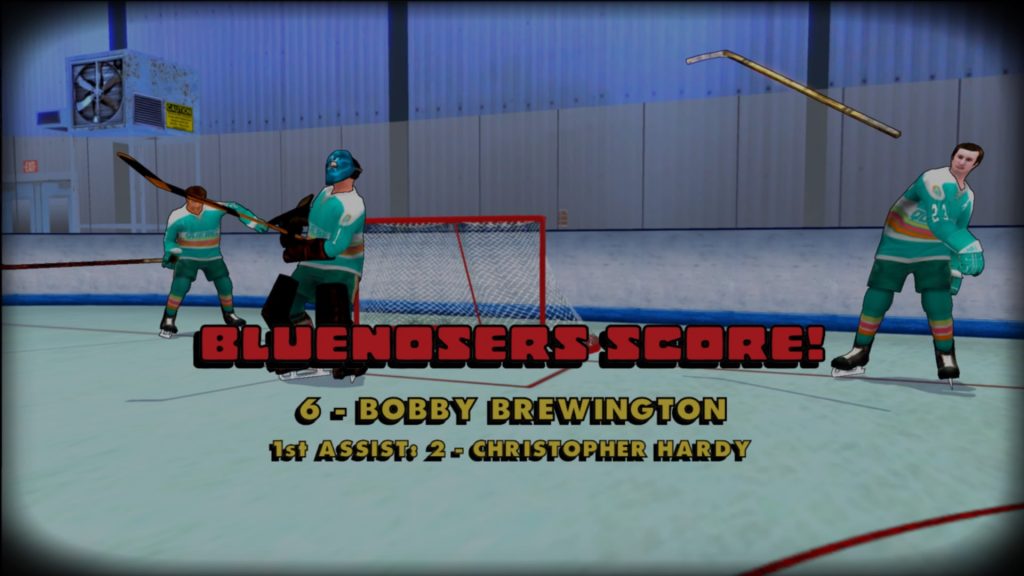 Ultimately, even if the hockey was proving more fruitful, I’m not sure the selection of modes would give me much more road to run. It’s clearly a project made by passionate people but it seems far too thin to be anything other than a short-lived novelty.

Old Time Hockey
5 Overall
Pros
+ Fantastic, charming presentation.
+ Fast, fluid action.
+ Great, cheeky soundtrack.
+ Plenty of control schemes.
Cons
- Only two modes to speak of.
- Advanced controls need to be unlocked via story progression.
- Newcomers may struggle.
- Not likely to have a huge shelf life.
Summary
What you'll find in Old Time Hockey is a lovingly represented homage to the sport's yesteryear that is soured by a paltry paring of modes and a challenge which a newcomer like me has found too steep. Take this score with a pinch of salt if you're experienced and want to see something with a little more personality than the NHL license. Just don't expect to sink much time into it.