Okay, you don’t tend to see many kart racers arrive to console, these days. When they do, they tend to be love letters to a brand or series. This is Nickelodeon’s fourth time to the track. Back in 2000, the characters of that game definitely sat well with the last time I watched the channel but, Nickelodeon Kart Racers is certainly making an attempt to match that, rather than paying homage to the current line-up of shows.  Game Mill Interactive takes the wheel. 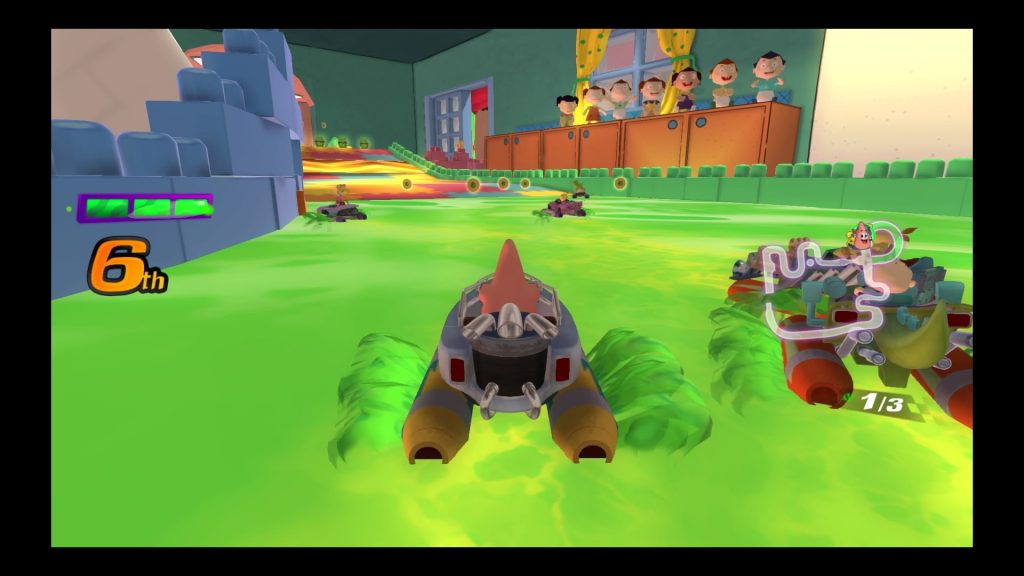 As a result, the cast features a lot of mainstays. Spongebob Squarepants, Rugrats, Hey Arnold and Teenage Mutant Ninja Turtles get representation, making 12 racers playable. Unfortunately, picking a character is a solely cosmetic decision. They don’t handle any differently or come with their own unique gimmicks.

The racing format will be familiar to anyone who’s played a classic Mario Kart before. You have several cups you can tackle in single player with 3 varying speeds which act as a means of difficulty. In these events you play a few races and your positions gain you points in the series. Naturally, your aim is to win them and doing so will unlock further cups. Unfortunately, these three unlocked cups don’t arrive until you’ve won all the others which can make gaining access to them a grind. 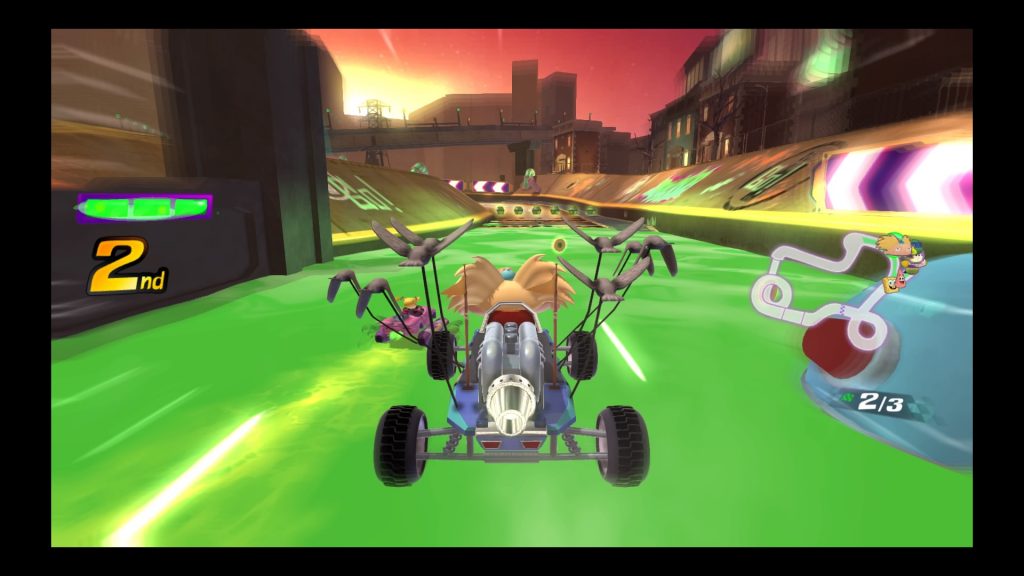 There’s more progression on offer with you gaining experience from your races. Each time you gain a level, you can participate in a victory lap which feels like a playable lootbox opening. That’s not as insidious as it sounds with you taking a very short time to smash crates for unlockable coins and kart parts. Coins are used to buy parts and paint jobs for your vehicle so you can effectively spend on what you don’t manage to draw out of boxes. The upgrades you can earn do feel significant, particularly when you consider just how lacking in individuality each character is.

Handling is perfectly serviceable. There’s nothing complex about it and, with the tracks not requiring much precision or hairpin turns, there’s little to worry about. Drifts are easy to accomplish and gliding is simple to control. There’s a couple of odd omissions. I don’t think there’s any reverse gear so you’re requiring the game to reset you after a few seconds. There’s no manual reset which could’ve come in handy in those situations. 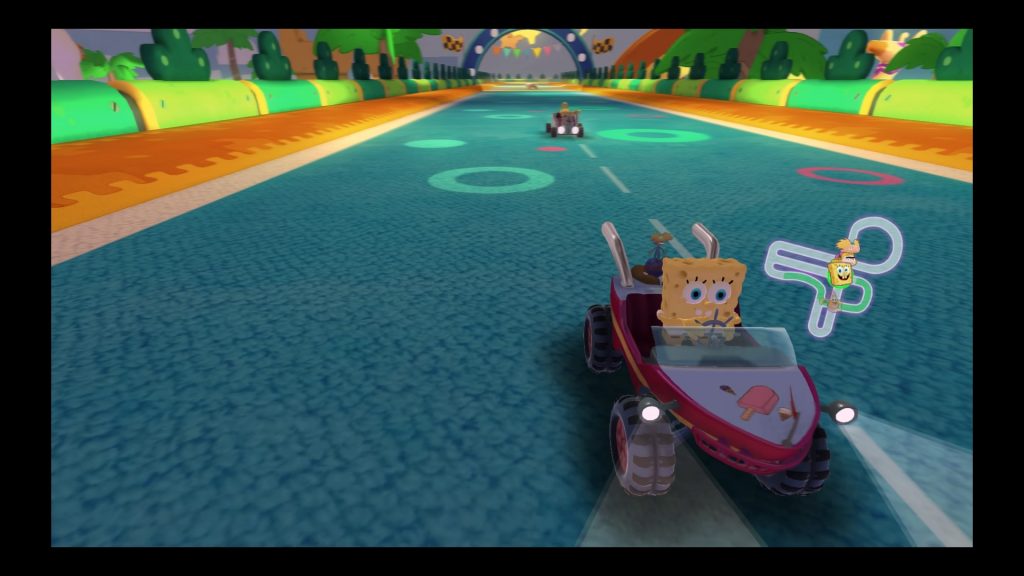 Kart racers do carry baggage when it comes to rubber-band AI. This does come into play but, even on expert speed, I found the cups to be winnable. There’s very little challenge to it with the increase in speed not making the circuits that much tougher to negotiate. Your only obstacle comes from staying ahead. The AI can be quite effective when it comes to utilising power-ups and, whilst they’re not superhuman, you can find instances of multiple ones causing the field no end of headaches. You do find opportunities to catch up and the grid are quite happy to trip up over themselves.

How the tracks are handled at least shows some dynamism. Powerups are scattered liberally, jumps offer you the opportunity to glide and there’s a multitude of boost rings and pads. I’m more impressed with how the tracks change over time. You can trigger slime valves which offer you a chance to replenish your slime which you trade in for boost. Lap on lap, new paths open which gives the track a little more life across the duration of a race. It’s a fixed routine and actual branching paths do sparingly come into play. The track design might be the strongest part of Nickeloden Kart Racers, even if they’re not tricky or technical to navigate.

There’s an overriding feeling this game was done on a budget short on time and money. The menus look like they’re right from a mobile port whilst the visuals look fairly behind the times. It technically holds itself together with framerate only dipping during some of the more hectic slime tracks. It’s not offensive to look or pristine, but it does make the game look lazily constructed. 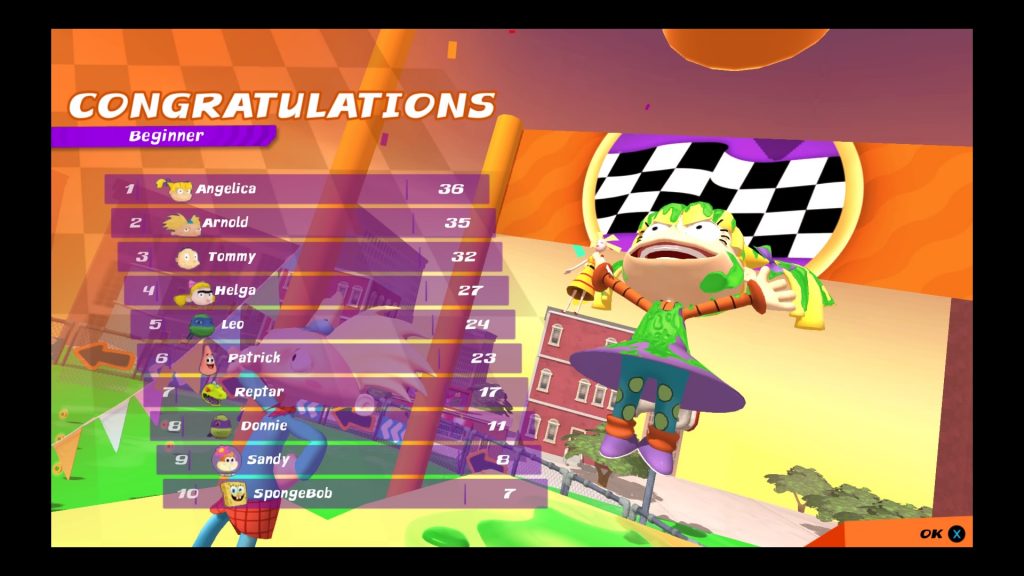 Music is constant, brash and irritating. There’s no real flavour or variety to it. It doesn’t feel like it pays homage to the license. Characters have text banter during weapon exchanges that really should be voiced. Again, it feels rushed and makes me wonder if Game Mill’s intention was to do the bare minimum with their allotted time.

There’s little glimpses of flair with the podium celebrations being unique to each character. Tracks might all melt into one another but they certainly borrow from the cartoons. The visual aesthetic doesn’t help to distinguish them but at least the circuit introductions give you a chance to peek at some interesting moving parts.

Nickelodeon Kart Racers
5 Overall
Pros
+ Interesting track design.
+ Handling is consistent.
+ AI seems about as fair as a kart racer can get.
Cons
- Unstoppable, incessant music.
- Not very challenging.
- Outdated, bland aesthetics.
- Very, very little individuality or flair on show.
Summary
Nickelodeon Kart Racers is a disappointing misstep. It handles fine with some mildly interesting track designs. Sadly, it struggles to really, really lean into the cartoons' individuality. This is a simple ride that won't offer much in the way of challenge and, overall, it lacks some care and attention that could've provided something more compelling.