New Star Games’ New Star Soccer was maybe the last iOS game that really hooked me in.  I spent the sort of time on it that when I uninstalled it, it was mainly to get my life back.  The follow up, New Star Manager, took some of the concepts of the original and expanded them but I found the nagging prodding towards IAPs to be a bit too much (which is the case with all mobile games) and sacked it off.  I wasn’t expecting a PS4 version though, especially given how touch-heavy the controls are on iOS, but here it is and I feel like I’m stumbling out of a cave to write this review because it has dominated my game time for days now.

For the uninitiated, this is a football game but one that isn’t stupid enough to take on FIFA or even PES.  Instead the game mixes semi-serious football management with on the pitch action, giving you control of both aspects of your club.  That club being New Star FC, a beleaguered non-league outfit struggling at the foot of the table with a few matches to go.  These matches, and your actions between them, are essentially your tutorial, teaching you how to handle your business both on and off the pitch. 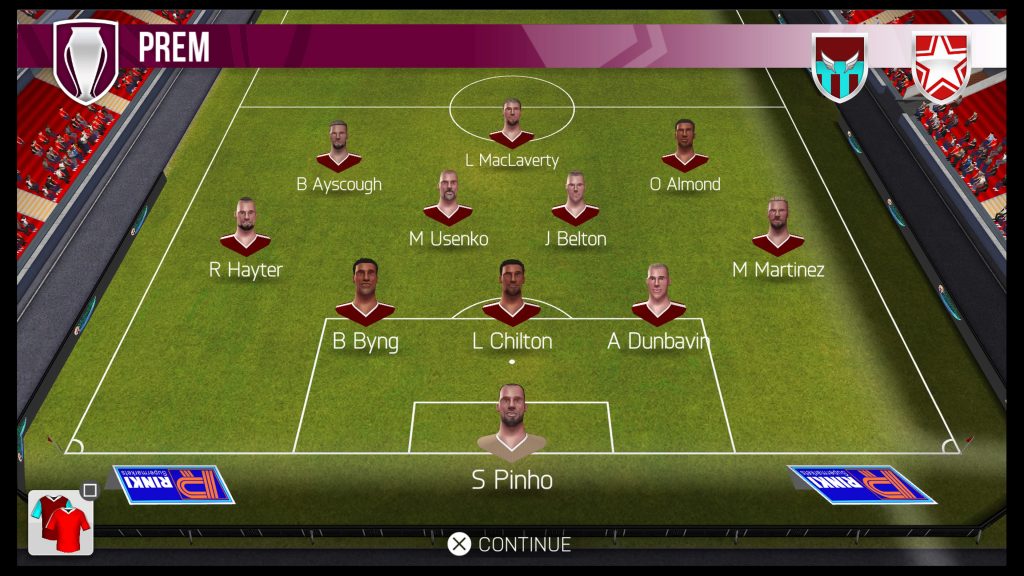 Starting with the latter, a match plays out as text much like Football Manager.  You can make substitutions or mess with the formation, work-rate and willingness to attack but essentially you are just watching text scroll by.  When your team fashions some meaningful possession, you are granted control.  You can run, pass or shoot with the ball and the action stops when you do, kind of like Superhot, which is odd but does give you a feeling that you are controlling the team and not just one player.  You can, at any point, draw out the routes that you want other players to run, allowing you to orchestrate some really good attacking moves.

It is an odd system and one that is relatively hard to get across here but essentially you are the team, the playmaker, the strikers, everything.  And what this ultimately means is that goals are crafted, not improvised like they are in FIFA.  And we love it.  That said, when you get a shooting opportunity these are a little too easy to take advantage of.  You pick the angle, and remember the game is static when you do that, and most of the time it goes in.  If it doesn’t, it’s usually the woodwork that thwarts you.  Not the goalie.  But you still need to get in those positions. 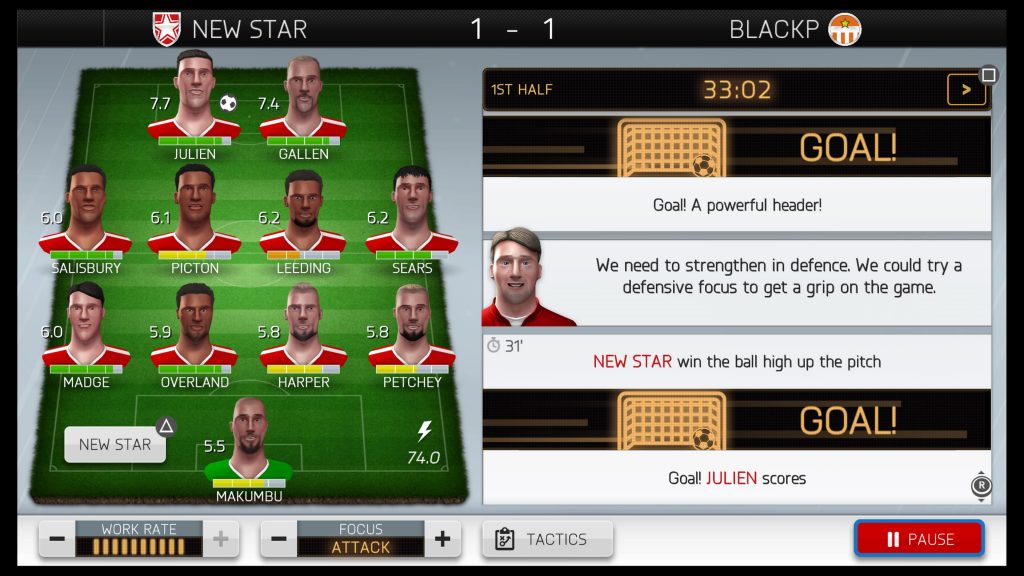 The difficulty really just comes from when you aren’t getting possession.  A match can go south pretty fast when that happens but we found that after a couple of seasons, our squad was able to go flat out for ninety minutes, meaning the chances usually did come.  And that meant that at the time of writing I’m now top of the Premier League after successive promotions.  That is an issue but, hey, I don’t play these games to struggle in mid-table in some godforsaken league.  I get enough of that shit supporting QPR in real life.

Off the pitch, the game isn’t as complex as something like Football Manager but it is fairly deep.  You manage your players in terms of getting them new skills and making sure contracts are sorted out.  You also buy and sell players, of course, and you have staff members (physio, youth coach etc) to deal with too.  Ticket prices, sponsors, board relationships, the stadium, club shop and everything else are all part of your remit too.  Somehow though it doesn’t feel like busywork.  With the career modes in FIFA and PES, I usually get really bored of the stuff between the matches but here the mindset is more on management than playing and it works really well. 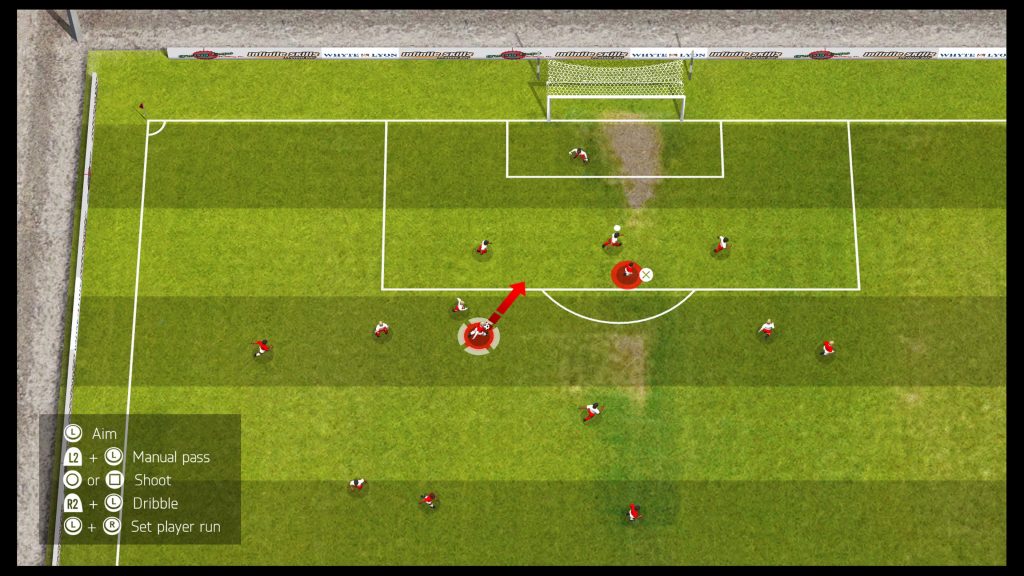 I did mess up and leave my Championship-winning side still playing in a 2000 capacity stadium and I blame that on the game’s interface more than my own stupidity.  There are definitely a lot of menus and sub-menus but I did cope with them all relatively well apart from that and before long everything felt pretty much under my control.  I knew what was going on with my club which is good because the game likes to spring press conferences on you that test your knowledge of your club.

I maybe haven’t enjoyed this mix of playing and management this much on a console since PES4 on the PS2, and more so on the PS1 iterations, but I’m properly loving New Star Manager and this might be down to a familiar feeling that I haven’t experienced in years and that’s the need to quietly celebrate when I score an important goal.  I have done that in years but here I am smugly waving a finger at the screen when I crash in a late winner off the inside of the post in a crucial match that I was losing earlier on. 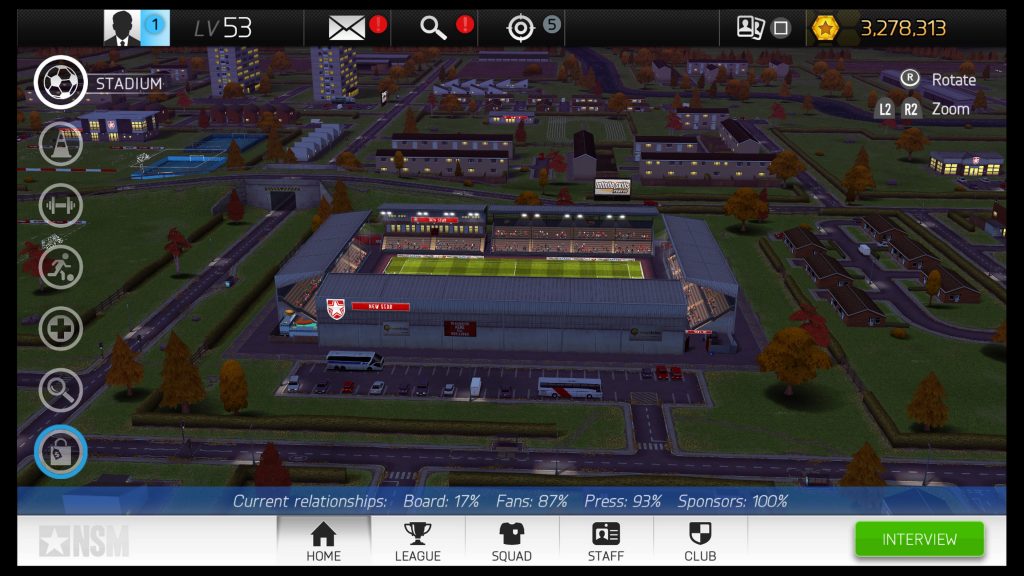 And with all the IAP nonsense gone from the game, New Star Manager gets to breathe and be the game it should be.  I’m not desperately worrying about cans of energy drinks or being prompted to buy ‘BUX’ the whole time and can instead concentrate on reinforcing the left side of my midfield or finding a silver-rated player that I can train up to be a gold one.  I’ve not felt so attached to a virtual team in over a decade and I’m loving it.

Visually the game still sports a clean, mobile like look but it does look pretty good in its own right and is good at displaying the things you really need to see while the usual crowd noises provide a typical background to the kicking sounds and referees’ whistles.  The game is also relatively bug-free with only a couple of issues coming to the fore in whatever stupid number of hours’ play I’ve put in.

So there you have it.  New Star Manager isn’t FIFA and it isn’t PES.  It’s its own thing and it is the most fun I’ve had with a football game in a really long time.

New Star Manager
8 Overall
Pros
+ Deep but not annoyingly deep management mechanics
+ Actual football play is really enjoyable
+ Powerfully addictive
+ Satisfying
+ Makes you care about your club
Cons
- A little on the easy side
- Might be a bit repetitive for some
Summary
New Star Manager is a bit of a triumph as a console game. It doesn't need the pomp and circumstance of the big football games. Instead it just relies on being a lot of fun, giving just enough complexity and realism to make it recognisably a football game but adding a big dollop of enjoyment that this genre has maybe forgotten about in recent years.