Racing across the pond still feels like a strange, exotic beast to me. NASCAR’s going through a tricky time at the moment but the appeal of the product and their overpowered saloon cars still keeps me curious. With the third iteration of the Nascar Heat series, 704 Games are looking to give the fans something to hold onto. 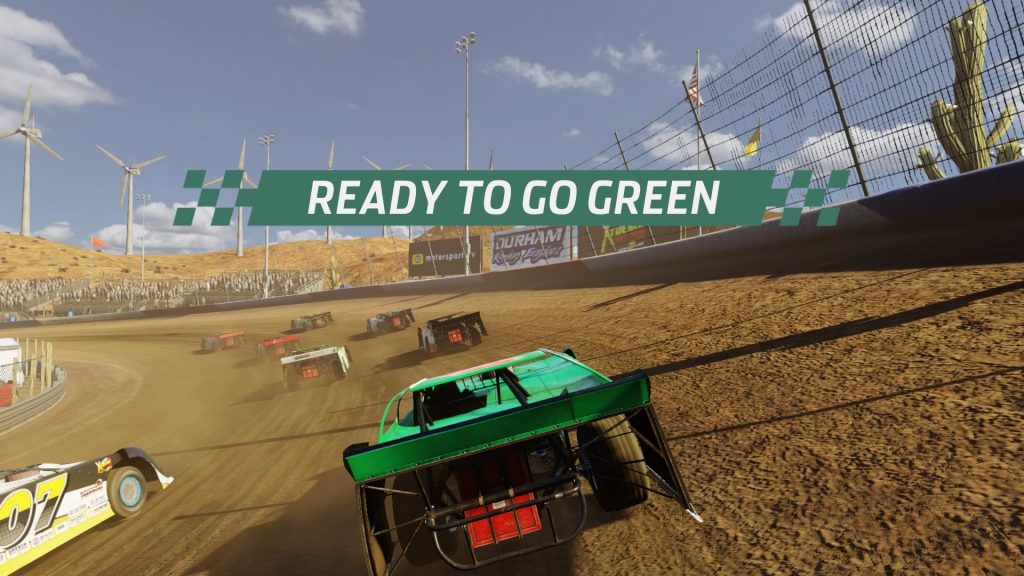 First thing’s first, NASCAR Heat 3‘s menu is packed with reasons to race. Aside from the usual championships (four in total), you have challenges, a career mode, quick races and online multiplayer. With the license comes the official tracks, cars and drivers of the 2018 season which includes a lot of tarmac and dirt to thrash around.

Racing in NASCAR Heat 3 is tight and strangely courteous. The AI’s aware of you as you fight for space which is great in a field of 30 cars. Drafting proves effective but I feel like there’s plenty of room for error. Being spun out seems hard to come by and rubbing is definitely racing as you come into contact with your competitors. Having the Dirt races here does give you a little bit variety in scenery and handling. Driving on the loose stuff does give you opportunities to be less precise. Grip is at a premium as you slide around corners and correct the car. It makes a change from racing on solid ground and, whilst it is predominantly an oval series, you do get the occasional venture into short circuits. It’s unmistakably arcade with limited options to tweak your car’s ability to hold the road. It’s not deep but I still enjoy it. 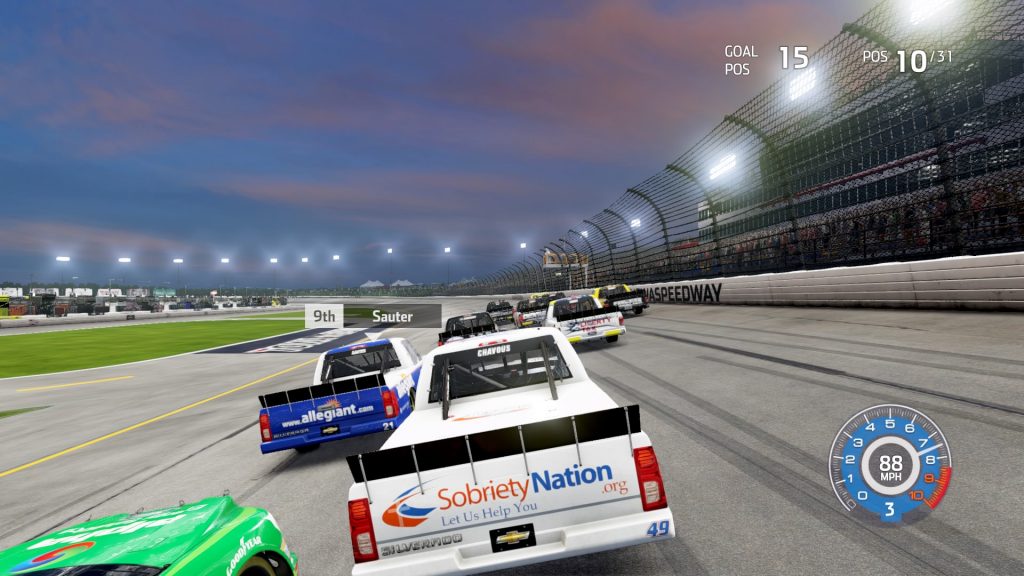 NASCAR Heat 3‘s career mode has a couple of neat tricks. You’re still racing around the United States looking for new contracts but you’re given incentives every handful of races to place consistently. At each tier of the career, you’re given a new mentor. These people star in something fantastic, poorly read video segments. You can see these are done in a haste with some probably settled on the first attempt. Some of them end abruptly and there’s an unintentional hilarity to them.

Credit to them for taking part and credit to 704 Games for bringing them on board. It adds some character to a career mode that would appear blander without it. As well as progressing as a racer, you can create your own team. You look to acquire vehicles and endorsements and staff as you try to establish your fledgeling outfit. When racing for others, you’re also racing for fans and can use hot seat opportunities to race for other teams in higher race series. It helps bolster your reputation across the grid and can put your foot in the door with new teams. You also acquire new fans and money with successful rides. Success gains you plenty of funding which only has a use if you’re looking to set up your own team. 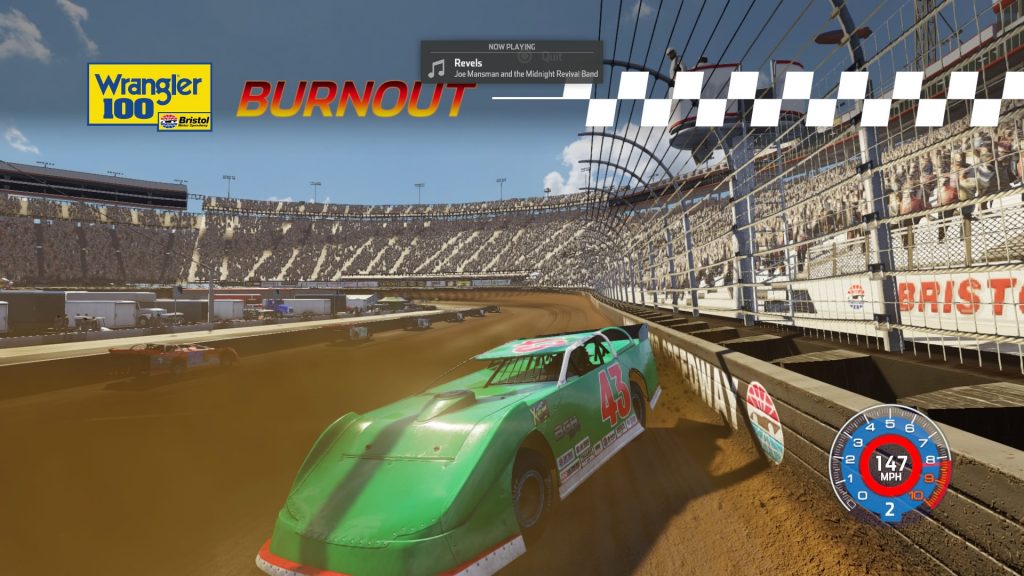 Interacting with other drivers plays a pivotal role. We’re used to seeing fake twitter exchanges in racing games but it’s always usually a one-way, complimentary conversation. NASCAR Heat 3 takes this in a different direction and allows you to respond to other members of the paddock. It’s a binary choice of compliment, criticise or apologising for past actions but it manifests itself in some interesting ways. It’s all about creating friends and rivals out on the track. The former will back you up whilst the latter will gladly dish out some retribution for past indiscretions. It does, thankfully find it’s way into racing situations as opposition act aggressively towards you or friendly racers look to give you more space. It even finds its way back into the twitter feed as friends will back you up in arguments with other racers. It’s a clever idea that doesn’t appear superficial.

I wish the sound had a little more to it. Engine notes remain the same throughout the grid with the only real atmosphere coming from the crowd when you hit the front or cross the finish. There is a rock and country soundtrack on offer that begins to wear thin when songs often repeat. They all seem to be centred around driving which is at least a charming idea. Sound design feels in keeping with the rest of the scaled back appearance. 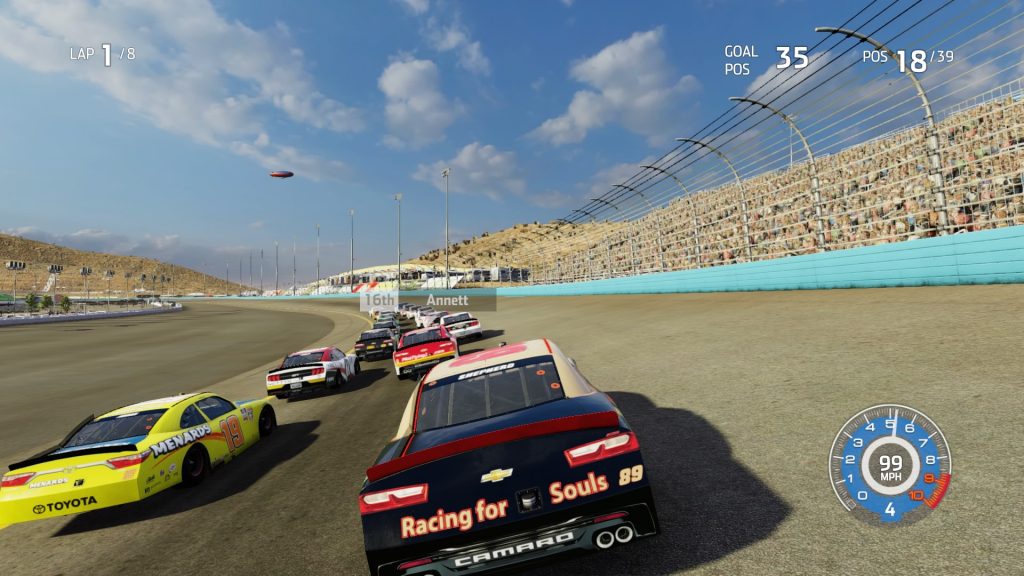 There’s a budget presentation to NASCAR Heat 3 which unfortunately, makes the action look dated right out of the box. The car models see more polish but, up close they can seem a little rushed. At least the tracks are well represented with every inch of the calendar covered. Cleveland’s trackside carnival is nice to see and every oval carries a sense of identity. There’s little flourishes like a pre-race rundown of major players. The shots of the paddock do help make the track seem lively, even if it’s not at the fidelity over games can push out. You stop seeing new things pretty quick, sadly but at least they’re trying to inject a race day atmosphere, on some level.

Overall, I’ve found this to be a likeable effort.  On the one hand, there’s only so much you can do with a sport as rigid as NASCAR but there’s a degree of character that I wasn’t expecting from this.  From the daft victory fanfare you can choose to the compulsory donuts you can spin, they’ve put in some little touches that do give this series a bit of life.  I wish it carried more polish and more variety in sound design but what’s here is decent.

NASCAR Heat 3
7 Overall
Pros
+ Plenty of content to race.
+ The career mode has some interesting gimmicks that are worth experimenting with.
+ Handling is simple, arcade fun.
+ There's a decent slice of track day atmosphere.
Cons
- It looks cheap and outdated.
- Season campaigns can feel exhausting.
- Sound design feels bland and underwhelming.

Summary
All things considered, I've had fun with NASCAR Heat 3. The seasons you take part in can feel draining but there's a charm to the career mode with the fake twitter exchanges and the 'I've only got one take to give' video segments. I'm not sure how long my enthusiasm will last but the arcade handling provides an enjoyable time behind the wheel.