Marooners is a party game from Dutch coders M2H Games who previously brought us the gritty World War 1 shooter, Verdun.  Thankfully they’ve left the blood and mud behind and have this time produced a cheery party game that offers on-and-offline matches where players get to compete in various minigames.

The premise of the game is that the competing players are marooned on some kind of island but the plot never really goes beyond that and so all you need to worry about is quickly figuring out the rules of the various minigames with the aim of earning coins and jewels while trying to scupper your opponents.  Each game controls the same way, you move with the left stick, jump with the X button and attack using the square button.

Nearly all of the games are viewed from a top down slightly but there are some variations and the your matches can be played in two modes:  Party and Arena.  The minigames in Party are primarily focused on scoring as much as possible by collecting coins and surviving for as long as possible while the Arena party games are all combat focused and just involve destroying your opponents as quickly as possible.  These can all be played with 2-6 players with AI bots filling up any spare slots as required. 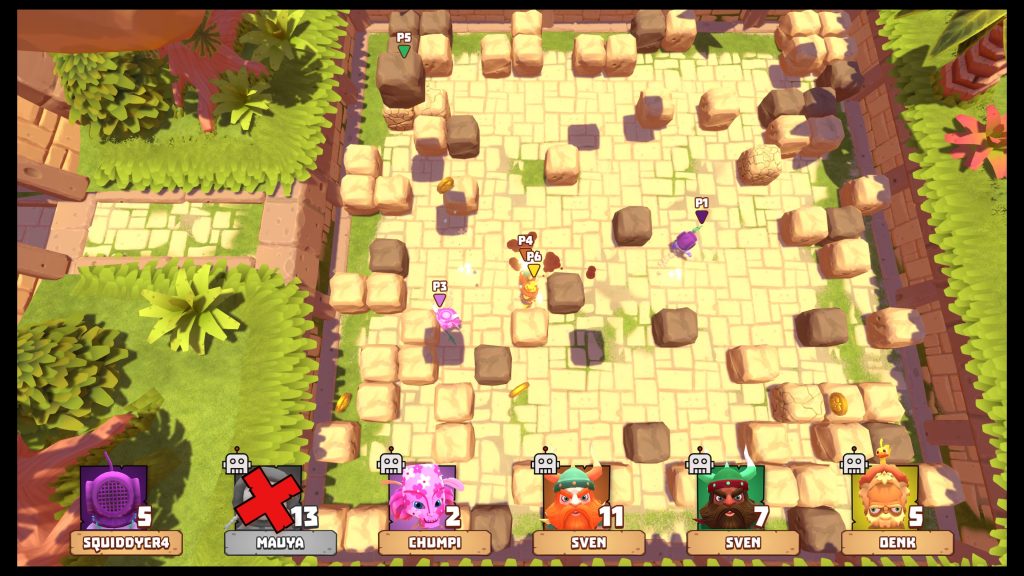 So, here’s the thing.  Arena mode is mostly horrible.  The minigames on offer are all variations on a theme.  You’re either pushing each other off of the edge of the area a’la Motos (hipster ’80s arcade reference, anyone?) or trying to blow each other up.  The problems are that the combat feels weedy, using bombs is generally like trying to bring a sniper rifle to a knife fight in a telephone box and generally everyone tends to die pretty quickly.  The AI is also abysmal here, often blowing themselves up or simply walking off of the edge of the arena for absolutely no reason.  They clearly haven’t been coded well enough at all so this mode is going to rely on being able to find players online to play with and we suspect that’ll be troublesome.  Heck, we even had a developer quit mid-game on us.

Party mode is a bit better though.  Both in terms of execution and variation but again there are problems with it.  It’s easier to review each minigame separately so that we can concentrate on the pros and cons.  And there are a few of each. 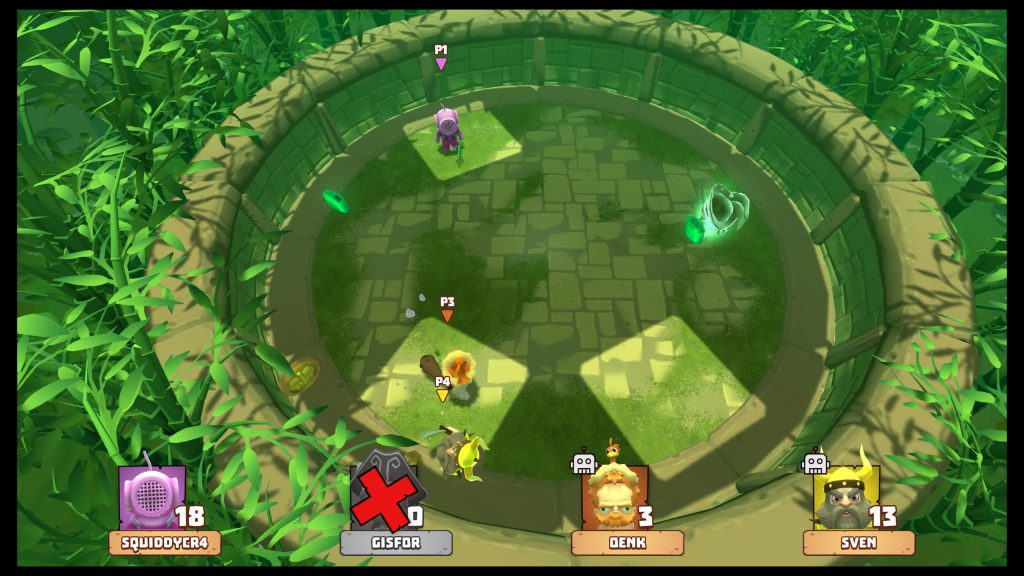 Avalanche of Agony – this mode sees you and your opponents moving left and right at the bottom of a ramp.  Large boulders roll down, bouncing off of pins like some sort of giant Pachinko machine and players need to dodge those while collecting coins and jewels.  The last player standing will get a 25 point bonus if they can collect the treasures that appear at the end.  This mode is okay but the physics on the boulders are massively inconsistent and the game is chaos with anything more than three players, but it works.

Flower Falls – looking like an alternative Bomberman level, this mode has the players running along flowers that fall a second after you land on them.  Constant motion is the key here as you dodge around picking up coins.  Smart players will try to cut off their opponents, Tron lightcycles style.  This mode is suitably manic but actually quite good fun.

Crushing Chasm – here players run around a circular arena while a giant stone disc drops down and crushes anyone who doesn’t get into its gaps which are indicated by light getting through its shadow.  A simple enough concept but the host has a pretty massive advantage here as other human players online sometimes don’t see the gaps and are squished without warning as if the mode loses sync.  It’s a shame because it’s an okay mode but is rendered useless online.

Brimstone Basin – this simple game has players collecting coins while statues on the outside of the circular platform they are on shoot fireballs.  This is a fairly simple mode and works okay although the AI display their usual complete lack of situational awareness and happily kill themselves like you’re playing Lemmings or something.

Mines of Mayhem – a little different to other modes, this one is set out like Namco’s Mr. Driller.   Players have to tunnel through square blocks in order to get to coins and generally keep ahead of the competition.  Stragglers get eliminated.  That means all the AI because they are incapable of doing well.  Human players will struggle with the confusing jumping rules, spongy controls and the power-up set that includes bombs which are the worst thing that you can pick up in this mode.  It’s not good but neither was Mr. Driller to be fair. 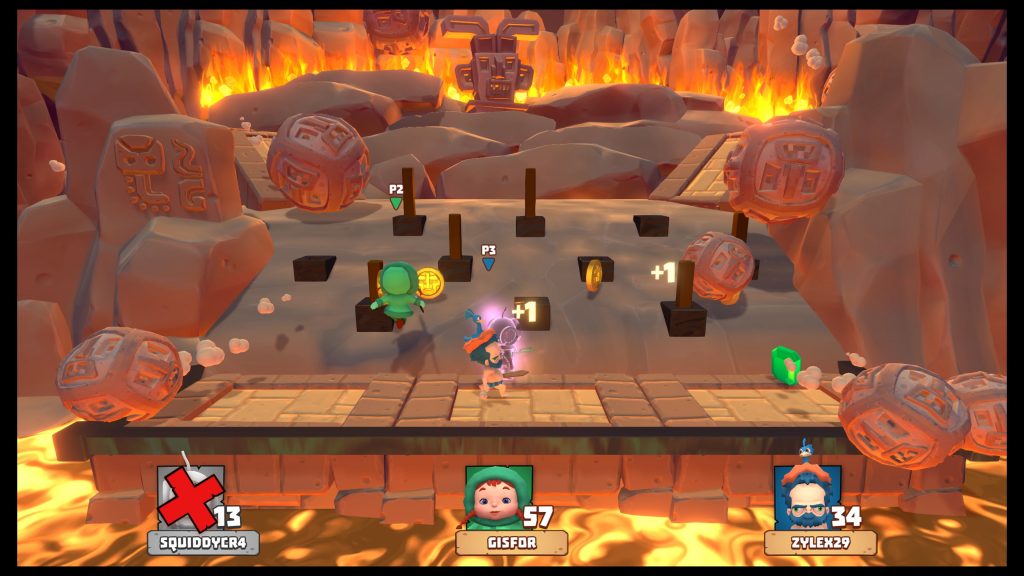 Icy Isles – similar to Brimstone Basin, this mode has you on a platform collecting coins.  This time the danger comes from the platform breaking up.  Again, the AI cannot cope with it at all.  Human players will be glad when it is over too.  Besides, the winner is generally the person who gets the treasure at the end, making conservative play a better strategy than playing aggressively.  Which isn’t all that much fun.

Rocky Road – playing like a chase sequence from a Crash Bandicoot game, this mode has promise.  You run forwards while boulders run down the hill towards you.  This would be fine apart from the boulders that fly out from the side and kill you without warning.  Terrible.

Twin Temple – this mode has players trying to grab a burning trophy.  Whoever holds it gains points.   Eventually though it’ll explode and so you’ll want to hand it over to someone else.  The problem here is that there is no real indication of who has the trophy when you’re in a crowd and there’s no feedback to tell you if your latest strike has been successful in getting it.  Also, hitting the holder in the back won’t win you it.  This mode is a mess.  A horrible mess.

Stonework Square – taking its visual cues from Bomberman again, this mode puts you in a square arena and has blocks dropping down on you.  You have to survive while collecting coins.  The clumsy controls present the biggest challenge here and the mode isn’t particularly interesting.

Crystal Cave – oddly this mode very rarely shows up.  It’s a simple one where you are collecting a finite amount of gems on a platform.  It’s too simplistic to get anything too wrong or particularly right.

Devil’s Den – this is a 2.5D platformer and sees players jumping their way up a vertically-scrolling level while collecting coins and avoiding fireballs.  It’d be fine but the flaw here is that if your opponent gets ahead of you, you may as well try to die because you can’t really catch them and killing yourself will at least limit their overall scoring. 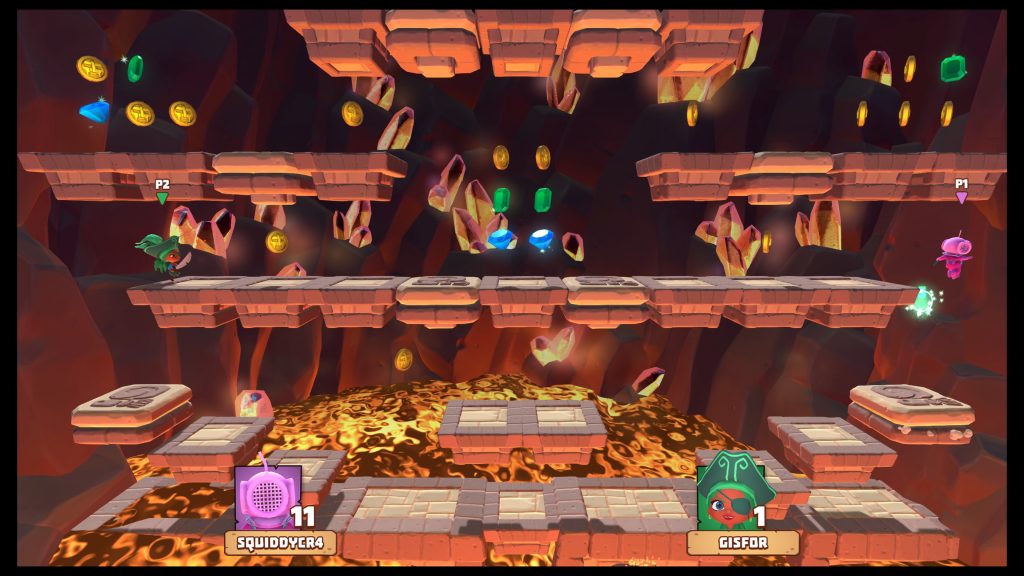 The best events on offer are never anything more than average and the worst ones are broken, so really there aren’t many reasons to recommend Marooners.  Aside from the lacklustre selection of minigames, the game is pretty lacking generally and suffers from some bad design choices and a general lack of care and attention.  None of which are particularly game breaking but still show a level of quality that isn’t really acceptable in 2018.

For example, when you finish a match the game counts up your coins but this takes an uncomfortably long amount of time and can’t be skipped.  Also the game offers a choice between linear play (where you play each minigame to the end) or chaos play.  Chaos switches between minigames mid-game.  It’s a confusing and unenjoyable way to do things and makes no sense as an option.  Also, just to round things off, the trophies linked to online wins unlock when playing the offline mode so I had 58 online wins but had apparently only played 30 or so matches online.

Visually the game adopts a cartoony style but is primitive enough to look like an early Xbox Live Arcade title.  You know, the sort that used to cost 400MSP.  The characters in the game are pretty generic but there is quite a lot of variation there.   You get a choice of colours too.  Unfortunately, the game doesn’t do a good job of indicating where you are when each round starts so the first few seconds tend to be chaotic which is a shame when a few of these modes really are won in those early moments.

Audio is an odd one.  The music is typically generic but is oddly loud when you first launch the game.  The DualShock speaker is used when you select your character but aside from that all of the game’s sound effects come through the TV and these effects are fairly ordinary.  In fact, that’s pretty much the story of the whole game.  Everything is just so generic.  From the games, to the characters, to the visuals, to the sound and even down to the weapons which have names like ‘Fishy Fishing Rod’ which I guess is lighthearted but where’s the creativity?  It’s game design absolutely by the numbers but that only really works if you’re absolutely killing it with great gameplay.

As such, Marooned does just enough in each department to get by as a game but it can’t really afford the issues presented by the weak AI and its least well though out design decisions.  It’s not a bad game but it’s a game that is very hard to engage with.  And while it definitely benefits from having human players, there are many better party game options out there so we expect this one will struggle to truly stand out online.

Marooners
5 Overall
Pros
+ Some okay games
+ A fairly decent number of games overall
+ Has online play
Cons
- Arena mode isn't very good
- AI fails at many of the games
- Fairly generic presentation
- Some games are a little broken
Summary
Marooners is a party game that has moments of potential but is all too often let down by a general lack of polish and creativity.