This reviewer loved Tearaway on Vita and subsequently Tearaway Unfolded on PS4. The creative lead for both of those is a gentleman called Rex Crowle. As well as Atoi’s two adventures, he worked on Little Big Planet and several Lionhead games including Fable and Black & White. Along with fellow Media Molecule alum Moo Yu, he founded small dev Foam Sword. Yu worked on Ratchet & Clank as well as LBP along with Crowle. 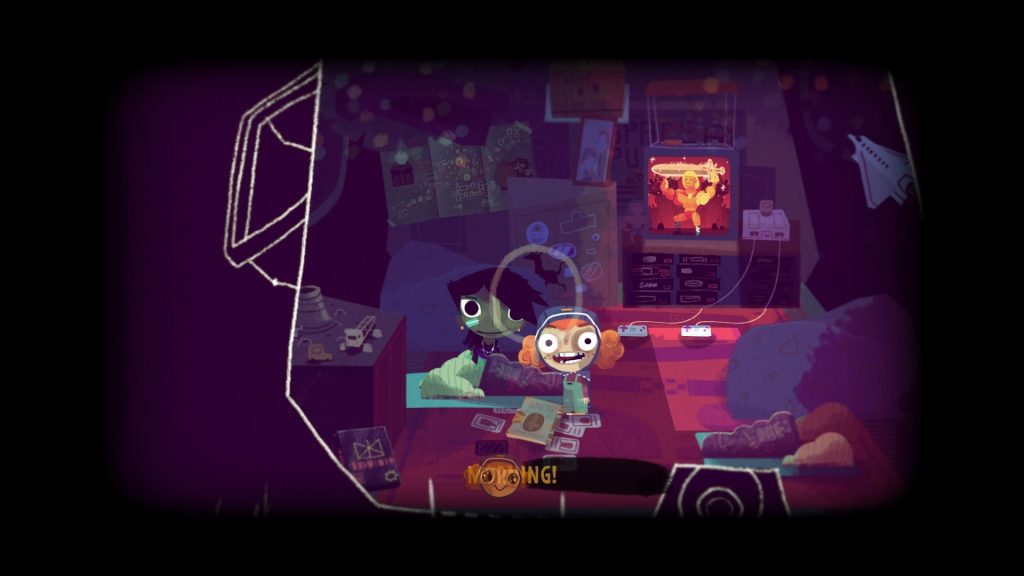 Crowle brings his childhood Cornwall to the table, just as Yu brings a love of classic SNES co-op RPG Secret of Mana. Knights and Bikes is intended to be played as a co-operative game, either locally or via PSN. When you play locally without a second player, the other characters in your party will follow your around, just like in Square’s 1993 rabite-filled delight. Thankfully without that annoying Dyluck character that keeps cropping up. On a few occasions our AI partner did get caught on the scenery, just like in Mana in fact. You can switch between characters in the event you’re playing solo. 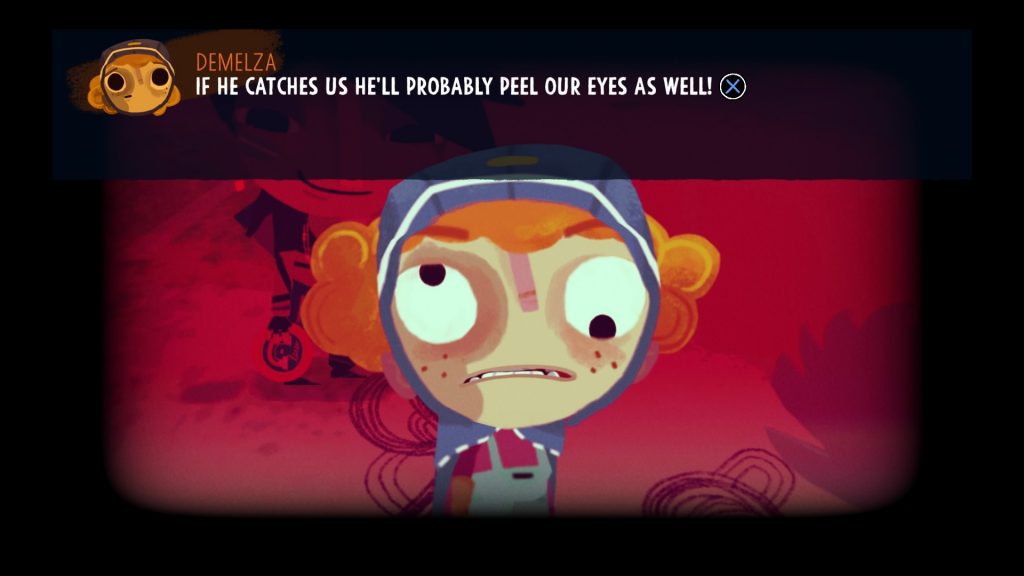 Slightly annoyingly, our real-life co-op partner was on a time-out from games so most of our playthrough was without his assistance. We look forward to his input and no doubt delight at Knights and Bikes. At least if he’s not prone to yet another five-year-old outburst.

You open the game as one of the two main characters, Nessa, a visitor to the island of Penfurzy. She’s a worldly interloper into this rustic late ’80s based setting. As you disembark the old-style ferry (familiar to anyone who’s crossed from East to West Cowes on the Isle of Wight for example) you’re greeted by the cheesy grin of seemingly the only child left on the island. This is the second protagonist of the piece Demelza. She’s delightfully bonkers and prone to flights of fancy, many of which are given flesh during Knights and Bikes. 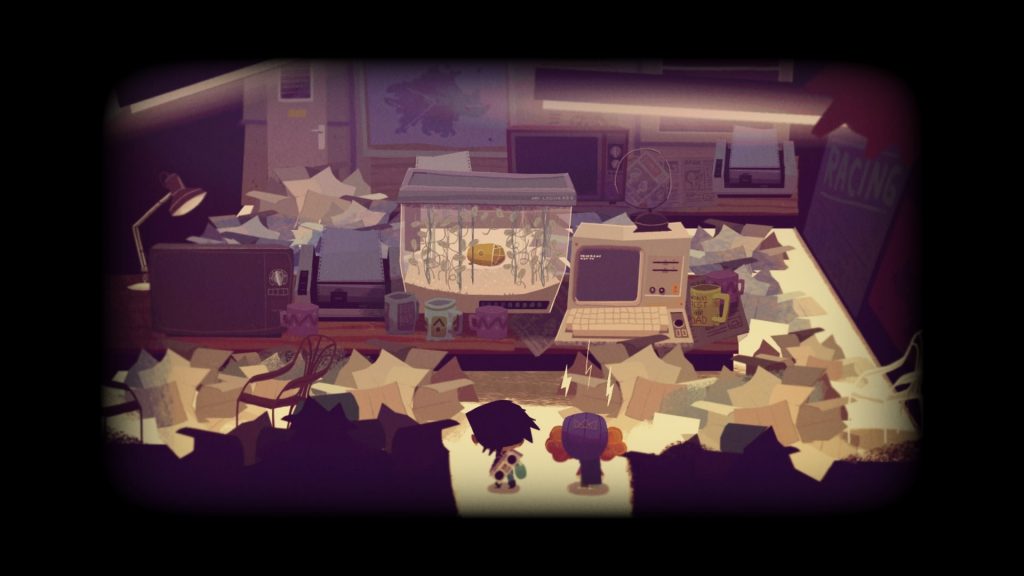 Demelza lives as one of the permanent residents in the island’s caravan park, owned and operated by her father. It’s seen better days and after a particularly harsh summer season, looks likely to close. She tries to make sense of this potential outcome as best she might but can’t quite get her head around it. Inevitably her anxieties manifest via her fertile imagination.

For reasons not immediately obvious, Demelza lives in a separate caravan to her dad. She alludes to the fact her mum is no longer on the scene but struggles to make sense of the fact. Either way, she has a sweet little place with her own telly and games console, playable by you and your co-op partner of course. 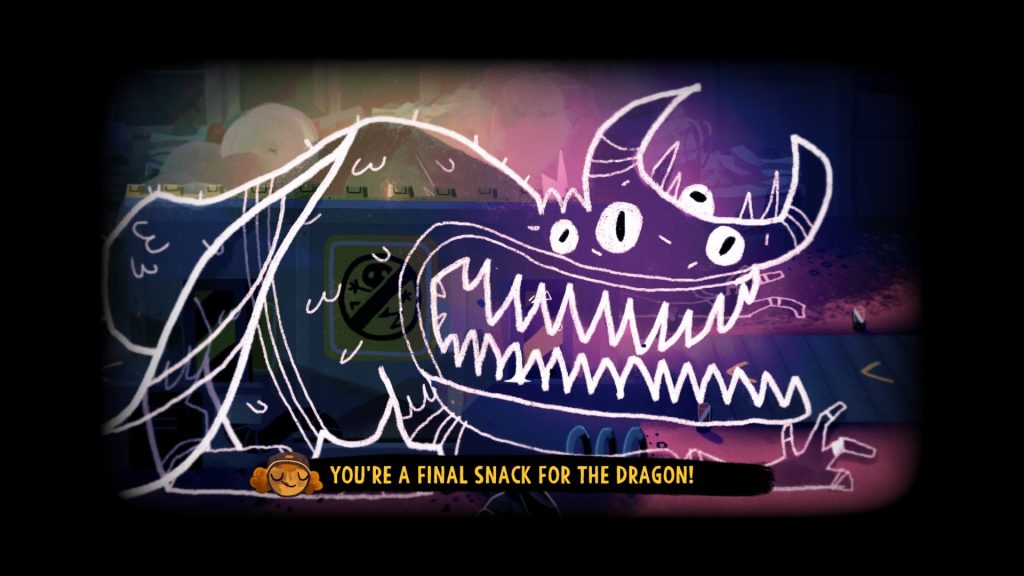 You’ll encounter the knights as part of the decrepit crazy golf course run by Demelza’s father. Your whistlestop tour through here is explained away by Melza’s familiarity with the course, having played it many times before. It also serves as an introduction to the combat system to some degree, your initial opponents being evil golf balls.

The titular bikes only become plural after a while, as to begin with Nessa must borrow her friend’s until she’s furnished with her own ride. Once you do get your own bike, you’ll unlock the option of customising your ride with all kinds of cosmetic knick-knacks. Much to Nessa’s disgust, her initial bike is bright pink and furnished with tassels and stabilisers. There’s a Metroidvania element brought into play here as you won’t be able to reach certain areas until you have the necessary upgrades to your bike. 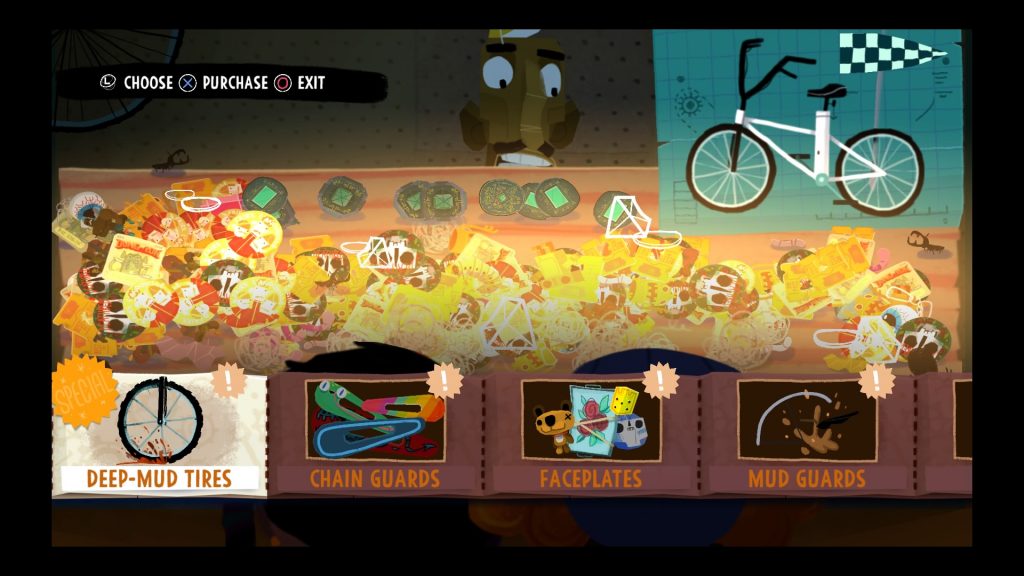 Eventually you’ll encounter the Queen of the Island, or at least a wooden depiction hidden by Demelza in a secret sanctum. This sanctuary is soon under threat as you face off against a noisy monster that threatens to destroy it. Only quick actions by the pair of you will see it off. As is often the case here, all is not quite as it seems, the reality being somewhat more prosaic. Yet just as devastating to the imaginary world inhabited by Demelza and Nessa.

Combat itself is relatively simplistic, but none the worse for it. Hammering the

button is generally sufficient. However, you’ll come unstuck in the event of being in the wrong place when an enemy projectile attack comes in. You can switch from one unlocked attack to another by tapping the right thumbstick, some attacks proving far more effective than others depending on context. 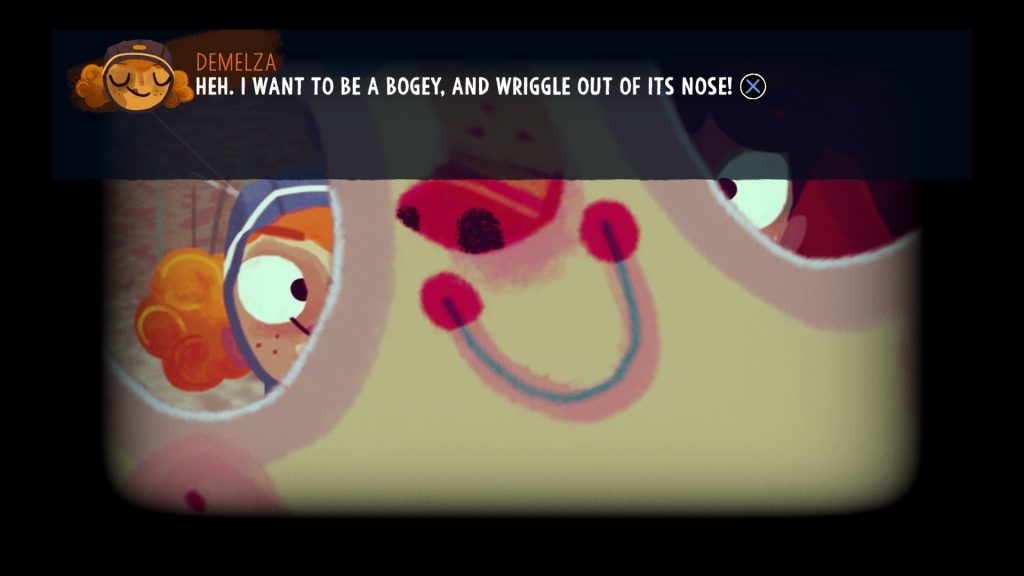 There soon follows another excursion into the wilderness via the bike shop, picking up another companion along the way. Honkers is a goose and while you can’t control him, you need to keep him fed or he sulks, signified by a black cloud above his head. Unlike the geese in Regular Show who are frankly dicks, Honkers serves a genuine use. He has an acute sense of smell and acts as a bloodhound of sorts. All delightfully odd, though in reality geese aren’t particularly renowned for their keen olfactory abilities. We’ll happily let it go ’cause who doesn’t want a goose to help them find treasure? 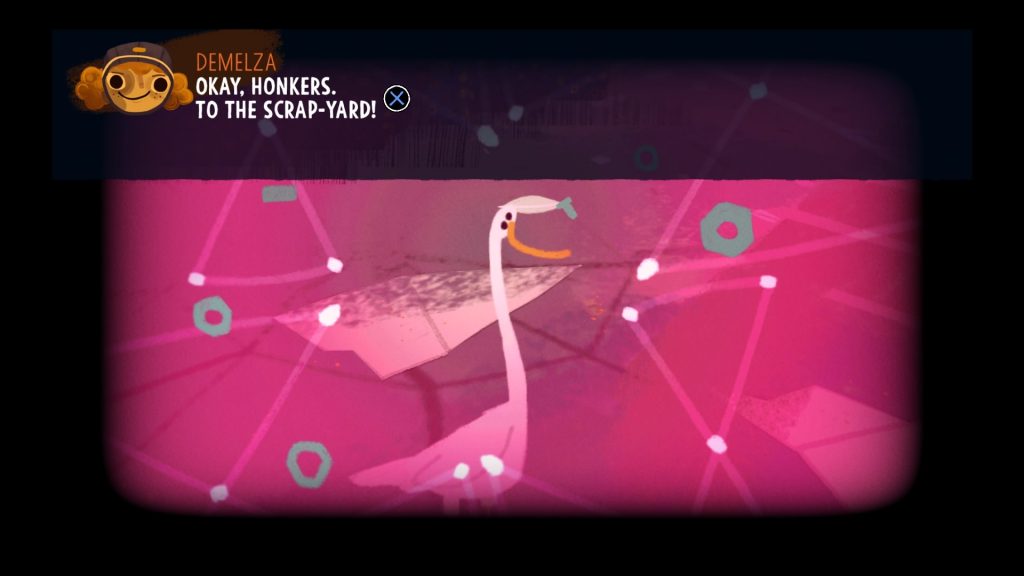 The art here is beautifully painted, giving it almost a rustic quality, it’s all incredibly charming. Crucially it’s enough of a stylistic departure from Crowle’s previous artwork to not come over as derivative in any way. If you think there’s a picture book quality here, you’d be spot on. There are already two children’s books available from all good booksellers. Going by the plot on display here as well as the general sense of humour, we’re sure we’ll be picking those up too.

Foam Sword have achieved something of a coup in terms of who they’ve got to provide the music here. Erstwhile games journalist and now movie soundtrack composer Daniel Pemberton (of Into The Spiderverse & that new Dark Crystal show) is on board with composition duties. He previously worked on Little Big Planet and The Movies which explains the connection. The music is very well done, as you’d expect from a composer of such status, fitting the mood of Knights and Bikes to a tee. It’s not ever-present though, more used as leitmotif and during the sporadic battles. 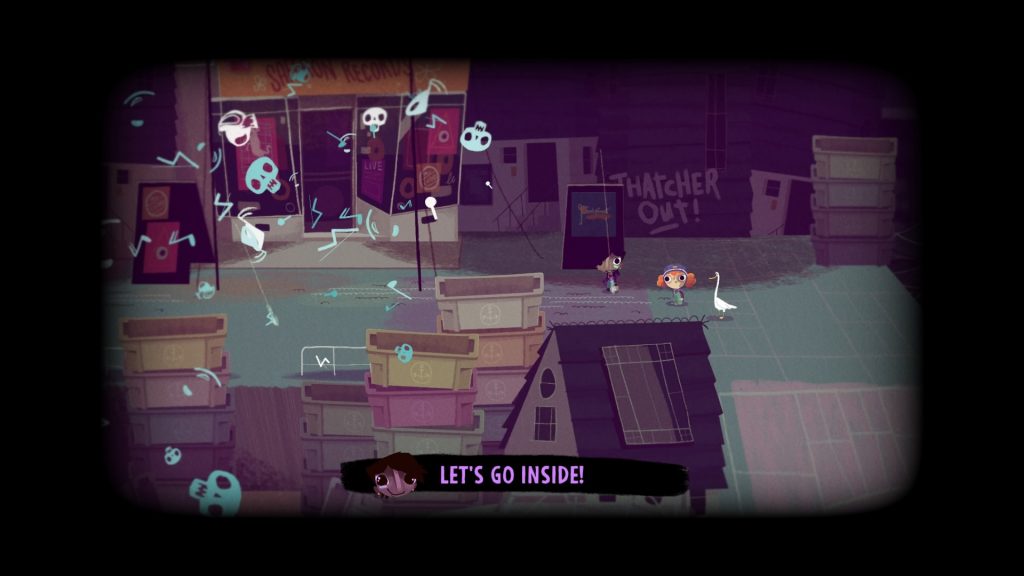 While we’re on the subject of sound, the spot effects are all very well chosen, all giggles of childish delight and rattles from the bikes. It all adds to the childlike sense of wonder in evidence here.

In a nod to the fact this best enjoyed as a co-operative experience, several activities can be done competitively. They serve no particular purpose other than to enhance the feeling of outright play. Amongst other activities you’ll race, use scrapyard magnets and as we previously mentioned, play the console inside Demelza’s caravan. 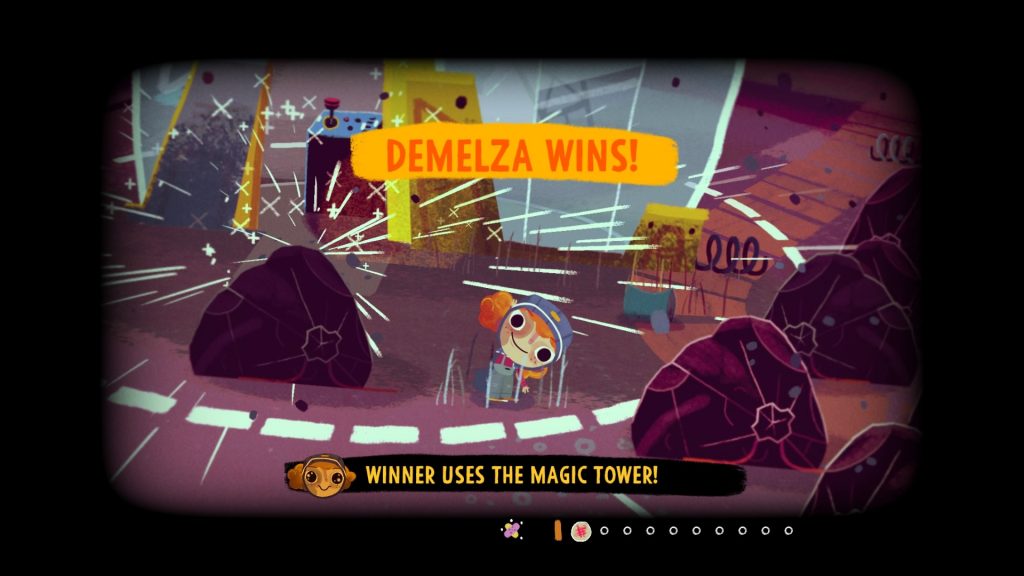 Knights and Bikes is often funny, the jokes generally aimed at the younger audience in terms of humour. Given the fact this is likely be played by kids with their parents it’s understandable they kept it on the puerile rather than smutty side of things. If your kid is amused by bogeys and bums, they’ll be well served here. Particularly with one trophy being for using a scrapyard crane to rearrange letters to spell out BUM in giant letters.

By this point in a review we’d usually have come up with several negatives on our way, but regarding Knights and Bikes there aren’t any really. In the purposes of balance and to avoid coming over too gushy, the combat can be overly simplistic. Just as getting stuck on scenery is a thing. Bike customisation options are 99% cosmetic, but to be honest it brings back the feeling of just being a kid. As an adult, this reviewer wants his bike to be silent, but as a kid spokey dokeys and silly accessories were what you did. 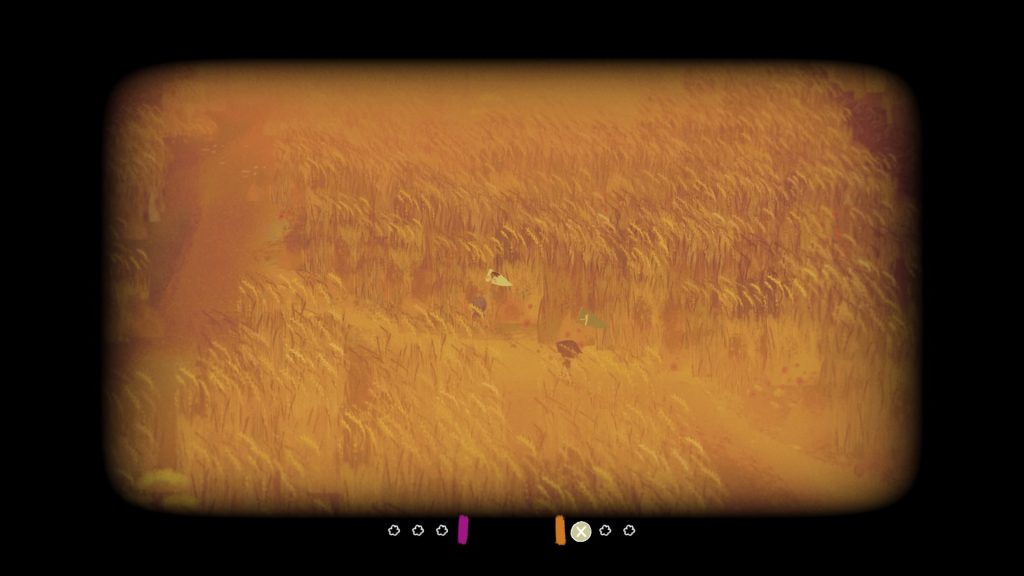 In conclusion then, Knights and Bikes is great. For anyone outside the UK it might be too self-referential in terms of the sheer Cornishness of it all. For anyone with kids in their house it’s sure to delight and anyone else it is sure to amuse otherwise. Even if Foam Sword are wrong about jam first and clotted cream second. It’s as essential as Bait, a brilliant film also from Cornwall. Go see it and buy this too.

Knights and Bikes
9 Overall
Pros
+ Captures the daftness of being a kid very well
+ So very Cornish, great sense of place
+ Built from the ground up to be co-op
+ Often funny yet occasionally sad too
+ Great production values and beautiful setting depicted by wonderful painted scenery
Cons
- Combat might be too simplistic for some
- Getting stuck on scenery can be an issue
- Perhaps a little dark thematically for younger players
- Pure wrong on jam first
Summary
A wonderful Cornish themed adventure and a journey into the fertile imagination of a loony kid. Recommended!