Journey to the Savage Planet is the debut title from Typhoon Studios, founded by industry veterans Alex Hutchinson, Yassine Riahi and Reid Schneider. Their respective softographies span Spore, Army of Two 40th Day, Arkham Origins and the early Battlefield games among many others. The studio was acquired by Google Stadia last month so this may be the only glimpse console owners get of Typhoon’s output without plumping for Google’s cloud gaming service in future. 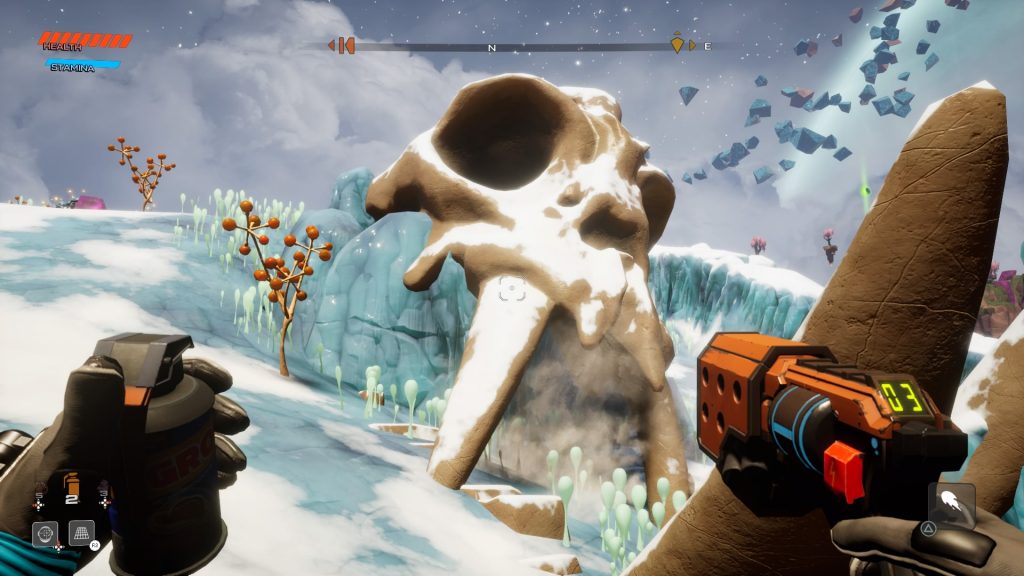 You’re an employee of Kindred Aerospace, a company that proudly boasts of being the fourth best interstellar exploration company around. Waking up on board one of their Javelin spaceships you awake to an orientation video from the CEO of Kindred, a man named Martin Tweed. He’s irrepressibly optimistic and a great glimpse into the corporation you’re a chattel of. The titular savage planet is meant to be undiscovered but much to the alarm of your CEO, it turns out there are traces of advanced civilisation scattered across AR-Y 26. Your task remains to catalogue the flora and fauna of the planet while also gathering more information on the technologically advanced structures that remain.

In practice this involves you scanning new species as you encounter them, not entirely unlike No Man’s Sky. Although in this instance, the creatures you encounter aren’t freakish nightmare fuel wrought by procedural algorithms. More carefully created by a consistently excellent design team. The creature designs are bright and breezy, bringing to mind Spore in terms of their look and feel. Though that’s hardly surprising given the lead dev’s background. This making of video gives a great insight into the level of detail the team put in. 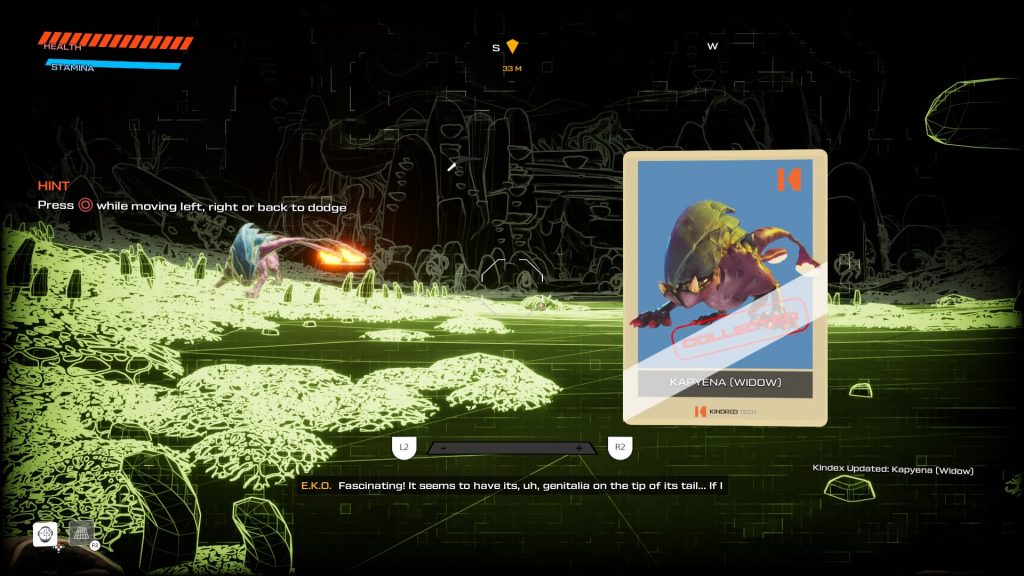 The first-person view affords for some creditable combat against the more… aggressive denizens of the planet, the gunplay being frequently satisfying. Rarely will you struggle to take down an enemy, your own ineptitude generally being the only factor leading to your demise.  Glowing yellow weak spots are in abundance on the predatory species, generally on the tip of tentacles that handily wave around.

In the event you die, and you likely will, your corpse will drop where it expires along with your gathered items in an automated recovery pack. Though in a departure from the approach used in Dark Souls, if you die again you won’t lose your stash. When you respawn onboard the Javelin, you’ll be gently mocked by the AI for your carelessness. If you died in an area where your corpse is recoverable you’ll be able to bury your own deceased husk, like its the most normal thing to do. Upon doing so a holographic gravestone will pop up with #1 for your first iteration, #2 for your second and so on. 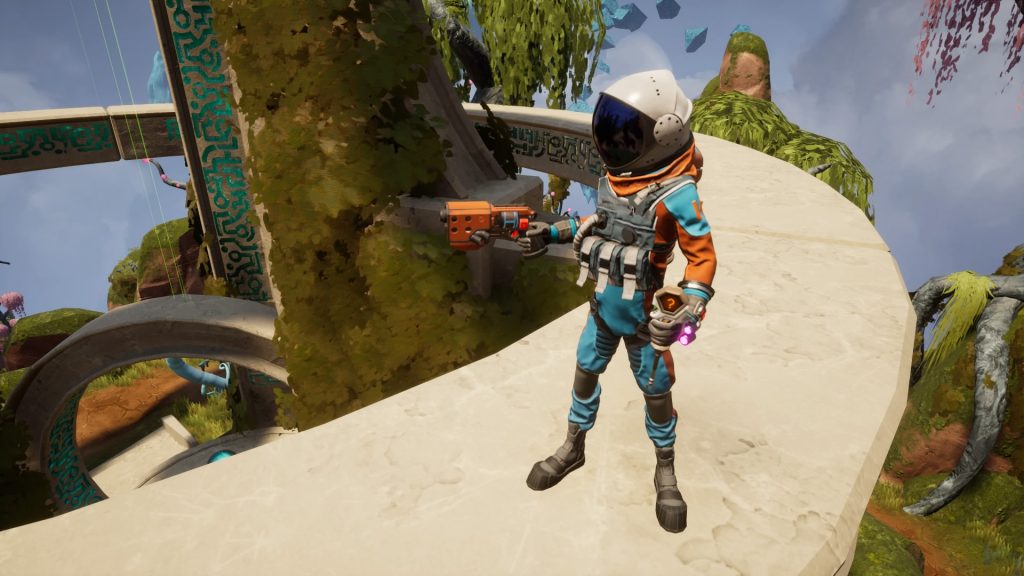 Handily your loot box is shown on your UI and you generally won’t have much trouble recovering it. Though the further into the labyrinthine planet you progress, you’ll occasionally spend ages going around in circles trying to retrieve your gear. You won’t begrudge Savage Planet for that much though as you’ll find lots more secrets that way. Kiss goodbye to your attempt at a four-hour playthrough, mind.

As you continue your adventure, you’ll discover rich mineral veins that you can gather along with small additional contributions from the creatures you’ll dispatch. It feels wrong to call them enemies as you’re the aggressor stomping around shooting them after all. Helpfully, the game gives you a little audible alert as well as a HUD indicator when there’s a secret nearby. In conjunction with your gathered material these secrets often contain alien alloy, which allow you to craft upgrades via the 3D printer on board your ship. 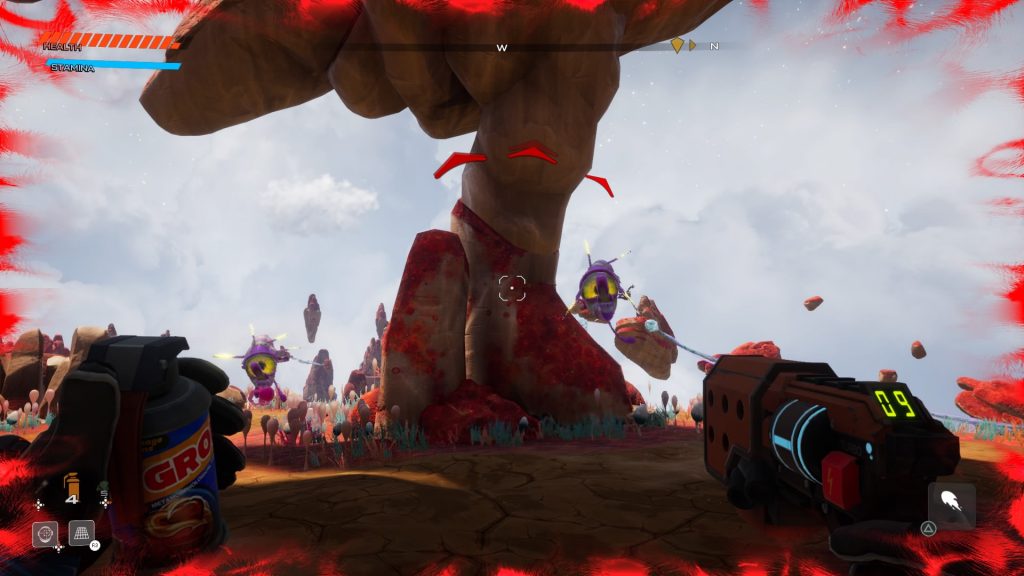 Your first death is likely to be from three flying space octopuses that spit poisonous projectiles in your direction. Coupled with a  small health bar you’re unlikely to come away unscathed. You’re gently corralled towards your first health and stamina upgrade, adjacent to these death dealers. The very orange goo levels you up, though the higher your level, the more you need to get an upgraded health bar. Soon you’ll be swatting away those octopuses, though occasionally sheer force of numbers will still overwhelm you.

Unlike the Metroid series, you won’t have your powers at the outset only to have them stripped away. Instead you won’t have much going on besides a punch, not even a weedy popgun to see off any perceived threat. Not that they’re much threat to begin with, only attacking you when you initiate combat. You’ll procure major upgrades by way of completing significant plot events, a handy double jump being your first upgrade of consequence. There soon follows the likes of a grapple and rocket boost amongst others. 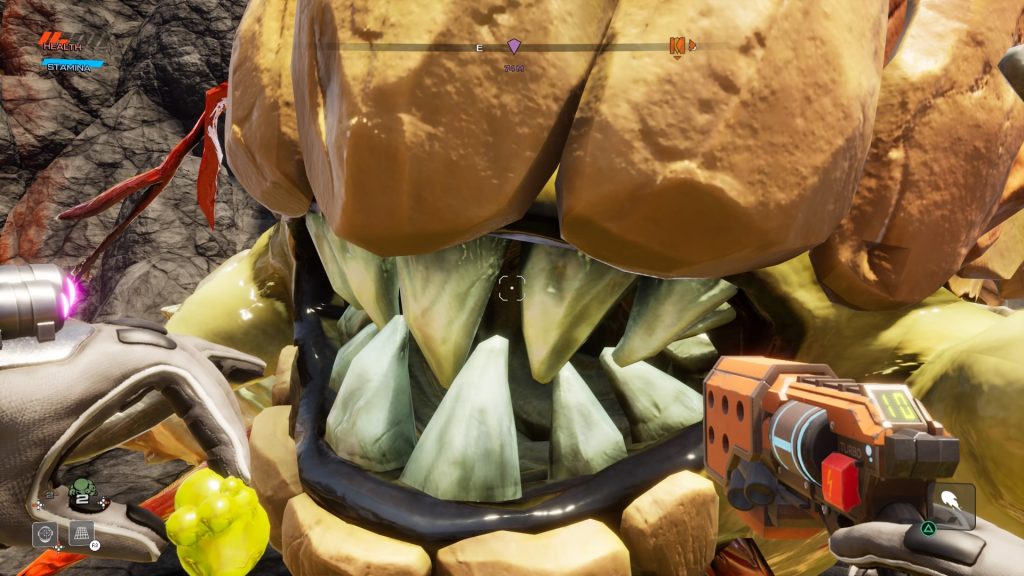 You can also utilise items held in your left hand. To begin with all you’ll have to hand will be cans of Grob do-it-all food goo which can be used as bait. You’ll soon discover various seed pods that allow you to throw explosives or corrosives amongst other things. One of the more useful items you can deploy is the grappling point, though only to a particular kind of receptive surface.

In typical genre fashion, many of the areas en-route are unavailable when you first pass through them. You’ll want to revisit them to collect more orange goo anyway, so it’s no chore retreading familiar areas. To expedite travel there are a sequence of abandoned alien teleports you can activate as you discover them. Handily your objectives are shown on your HUD, so you know the general direction to travel in.  They’re also shown when choosing which teleport to go to. A map might come in handy sometimes though, as sometimes your loot box can be on the fringe of one area and hard to find. 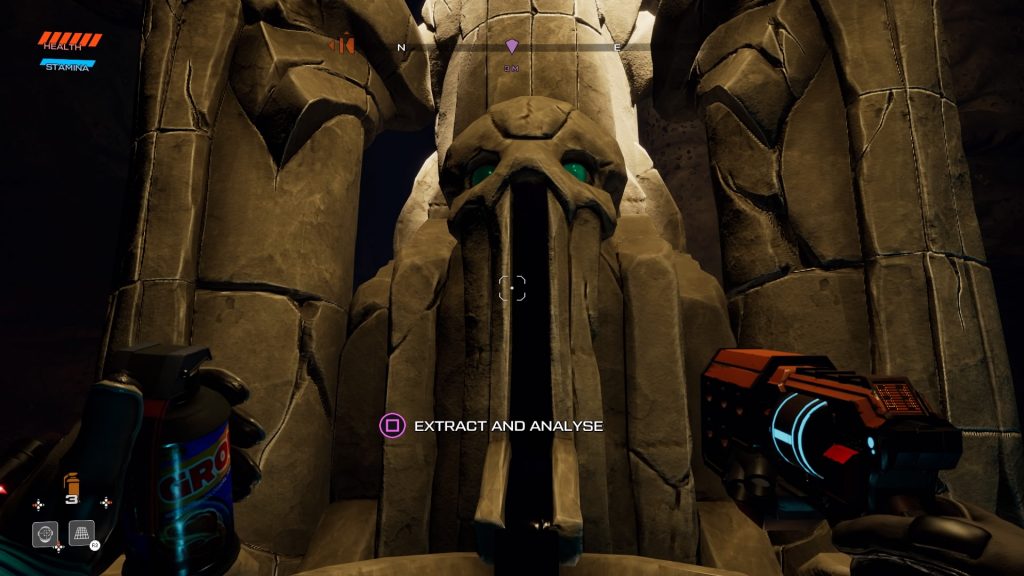 As you unlock major upgrades at your ship, the onboard video screens play piped ads from Kindred. These ads are often funny as well as a sideways glance at consumer culture. We want to get some cucumber shitwater-flavoured Grob, just out of sheer curiosity. The very thinly veiled dig at EA and DLC culture is also a highlight.

There’s a co-operative mode on offer here, though sadly only via PS+ multiplayer. Given the devs history with Army of Tutu, we were a little disappointed to discover there’s no local split-screen option. We hope for a future patch, but for now corralling a friend also with the game is the only way to enjoy this mode. 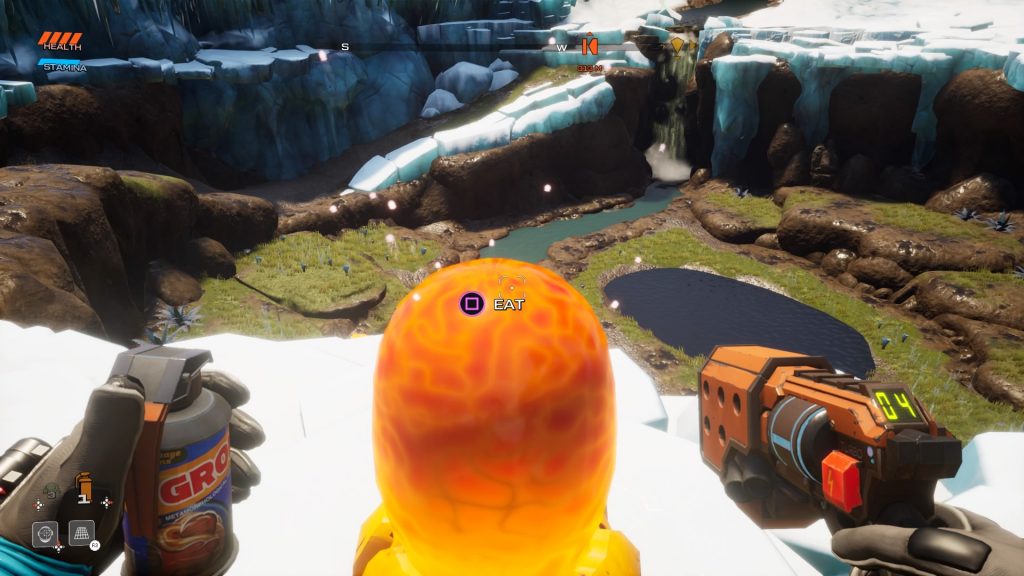 In conclusion, Journey to the Savage Planet is an excellent 3D exploration game which is often very funny. There’s something vaguely sinister but also endearingly inept about Kindred’s #4 ranking boast, just as Martin Tweed is affable but you’re never quite sure about his motivations. My wife remarked “this game doesn’t look like most of the shit you review.” A ringing endorsement if ever there was one. Go buy this game.

Journey to the Savage Planet
9 Overall
Pros
+ Bright and clear design, often beautiful
+ Excellent traversal once you unlock the upgrades
+ Gently mocking corporate culture by way of Kindred Aerospace and the ads
+ The scanning and cataloguing aspect of exobiology is compelling
+ The collectibles don't feel like a chore at all
Cons
- Co-op is via PSN only, no local splitscreen larks
- A map of some sort might help
- Finding your loot stash can prove challenging, especially when it spawns in an unexpected spot
- That four-hour completion trophy won't come easy
Summary
Journey to the Savage Planet is an excellent and often funny firstperson exploration game. You could call it a Metroidvania game but that’s just lazy. Go out and buy this.