From Lucky Mountain Games (aka Trevor Ley) in conjunction with Sumo Nottingham, published by Curve Digital, comes Hotshot Racing. Formerly known as Racing Apex and some ten years in the making, initially being intended as an iOS release.

For anyone as long in the tooth as we are, it’s pretty clear where Lucky Mountain’s influences came from. Notably the golden age of blue sky Sega AM2 racing games, namely Virtua Racing, Daytona USA, Sega Rally, SCUD Race and Outrun plus its sequels. Unapologetically an arcade racer harking back to those halcyon days when you had a local arcade before most operators filled them with fruit machines. 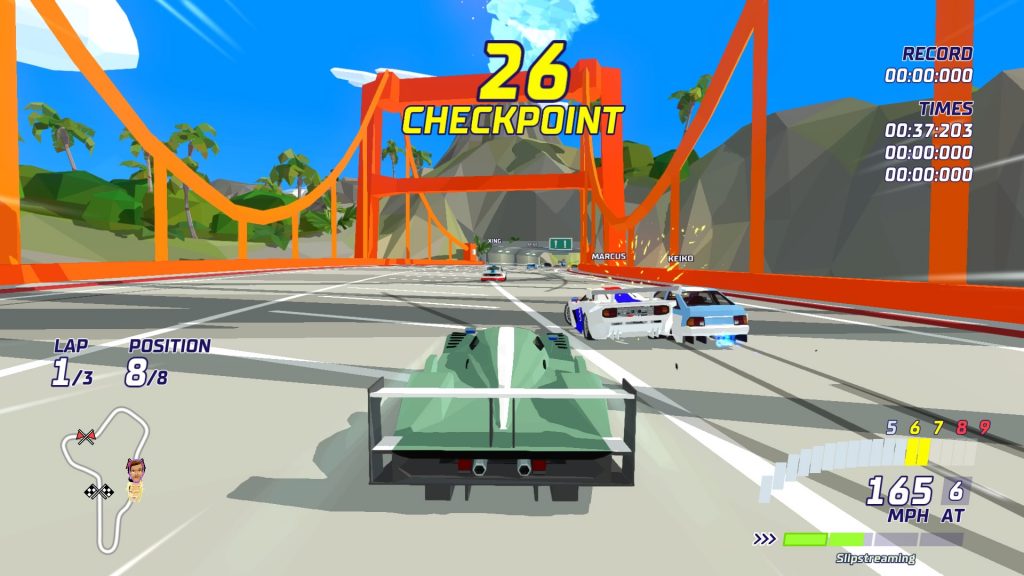 Our first regular haunt was on Union Street in Aldershot, sadly our last visit there was one of disappointment with the only non-gambling machine being some crappy phone game that dispensed tickets. Anyway, latterly we would travel up to that London and the Funland/Segaworld arcade in Piccadilly’s Trocadero. Long since shut down, these defunct arcades are emblematic of a gaming age.

Hotshot Racing is a wonderful paean to those days of yore, only in this case you’re playing on a lovely big TV in your living room rather than feeding a machine with pound coins for four minutes of adrenaline. Having a development partner in Sumo has really helped get Hotshot over the line, especially given their work on the fantastic Outrun 2006: Coast 2 Coast, aspects of which you’ll see here. 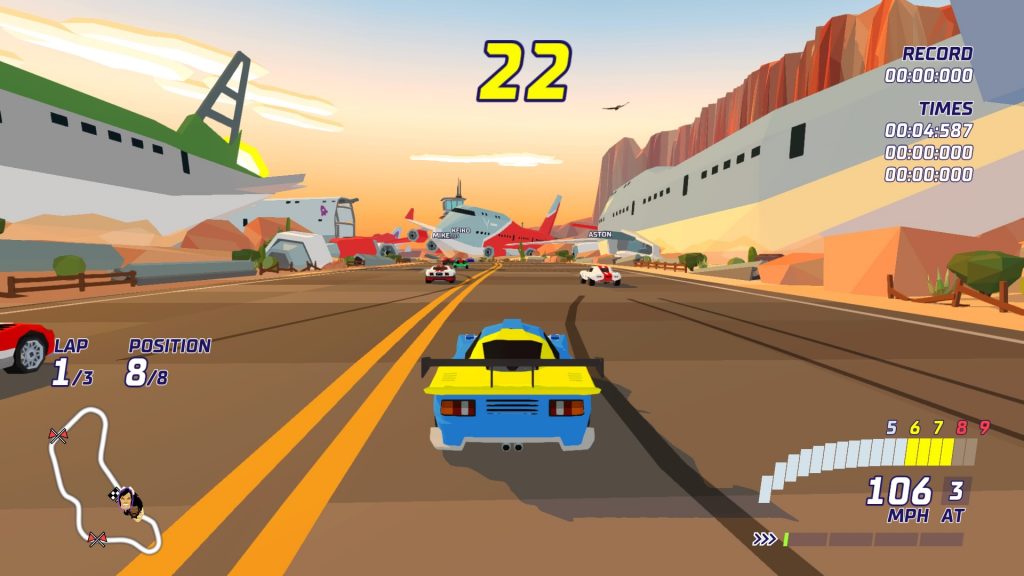 Anyway, enough preamble. Hotshot Racing was always going to be day one purchase for us anyway, so it’s fair to say we are positively biased towards it. Our optimism was largely well placed as initial impressions are good. The bright palette and polygonal style give HSR a very distinct look, just as the bold character designs are very deliberately stylised.

Each of the eight characters is rather cliched, just as their four vehicles fit their nation. For example, the first character Alexa is a brash American lady, so she has a 70’s era Corvette, a Nascar type racer, a Pontiac Firebird and a thinly veiled Dodge Viper. They’re all named with ciphers so as to avoid having to be licenced, but it’s pretty clear which real-life vehicle has inspired them. 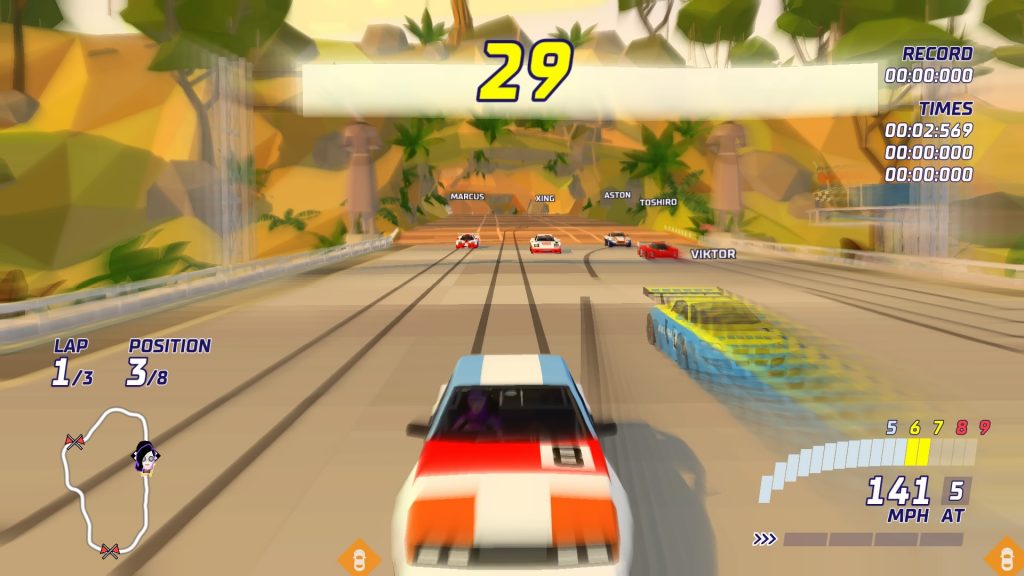 The vehicles have three distinct attributes: speed, acceleration and drift. The first vehicle in each set of four will be a balanced affair, the second with great acceleration, the third with highest top speed and finally, yes, drift being the key attribute in the fourth. The twistier and more technical the track, the more you’ll want acceleration or drift. This comes into play a lot more on the hard and expert levels as on the latter, you have no margin of error. Screw up a corner and the opposition will gap you quicker than a Tory making an excuse for his latest conflict of interest.

Make no bones about it, normal difficulty might as well be called easy difficulty. You’d do well to lose at this difficulty level, though the AI rubberbanding is extremely evident. At 50cc on SNES Mario Kart for example, you can gap and lead from the off. In HSR you can drive a flawless race at normal difficulty and you’ll have the AI on your rear bumper. It makes getting the trophy for driving a race without hitting another vehicle seem all the more impossible. 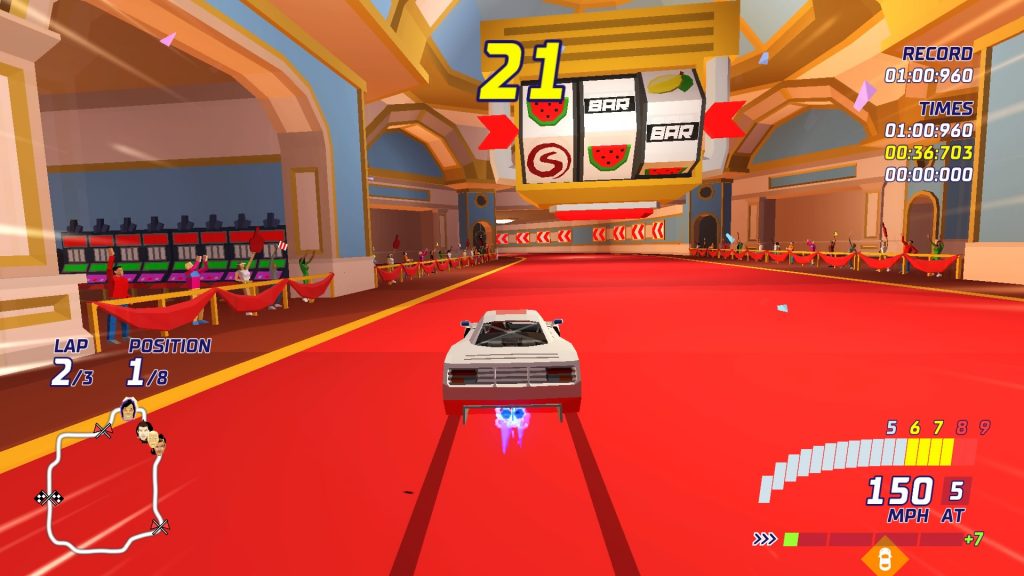 Hard difficulty is a much more challenging proposition but you still stand a fair chance. The AI isn’t entirely infallible, in fact we’d won the first three races of a championship and got shunted into the wall on the penultimate corner. We dropped to eighth place in the final race yet still won the championship by a point.

No such luck on expert difficulty. You need to drive flawlessly, nail every drift, every corner, use boost liberally. Your wheels touch the periphery of the track, the AI will leave you for dead. If anything it will make you drop to a lesser difficulty to start with.

The fact remains that the AI don’t take any prisoners here. You’ll be bumped and shunted so often that sometimes you’ll be in the middle of a tricky corner and find yourself spun around. It doesn’t happen that often thankfully, but you’ll do well to recover any sort of a result if it happens in the latter stages of a race. 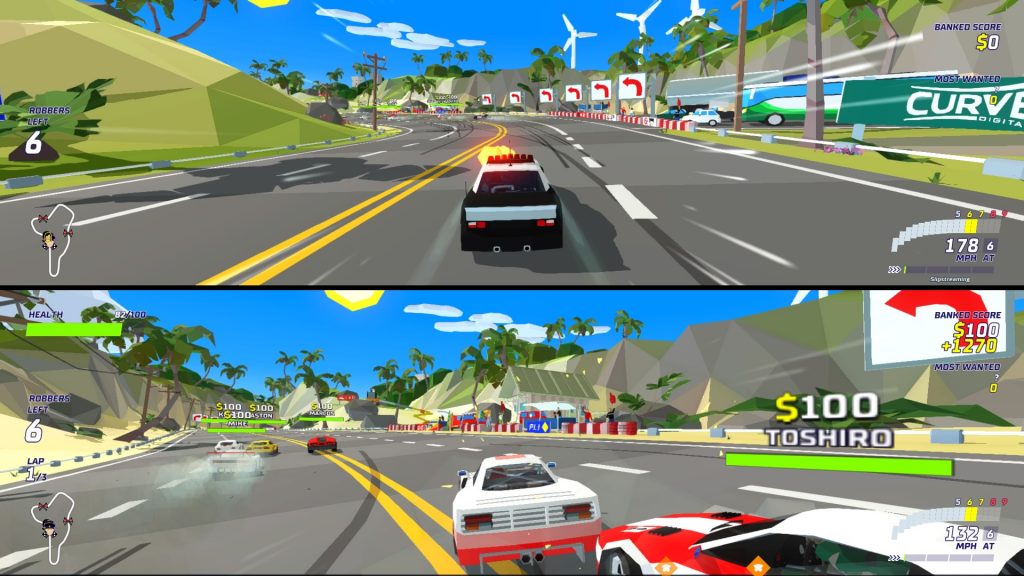 In addition to straight arcade races, there’s two extra modes. OK, three if you include time attack. Firstly there’s Cops and Robbers, which is just what it sounds like. A team of cops against robbers. Do enough damage to the robbers and they flip to your side. Alternately if you’re a robber you have to do all you can to evade police attention. It’s very much a hectic Chase HQ with extra craziness.

The other mode is Drive or Explode. The same premise as the Keanu Reeves and Sandra Bollock movie Speed, only a little more rapid. Keep your speed above a certain threshold or your vehicle will take damage until you eventually explode. Go fast enough and you’ll survive longer, but the shunt happy AI don’t help matters either. It’s a fun diversion, but just that. The main meat here is Grand Prix mode and as such Hotshot Racing suffers a little from a lack of depth. 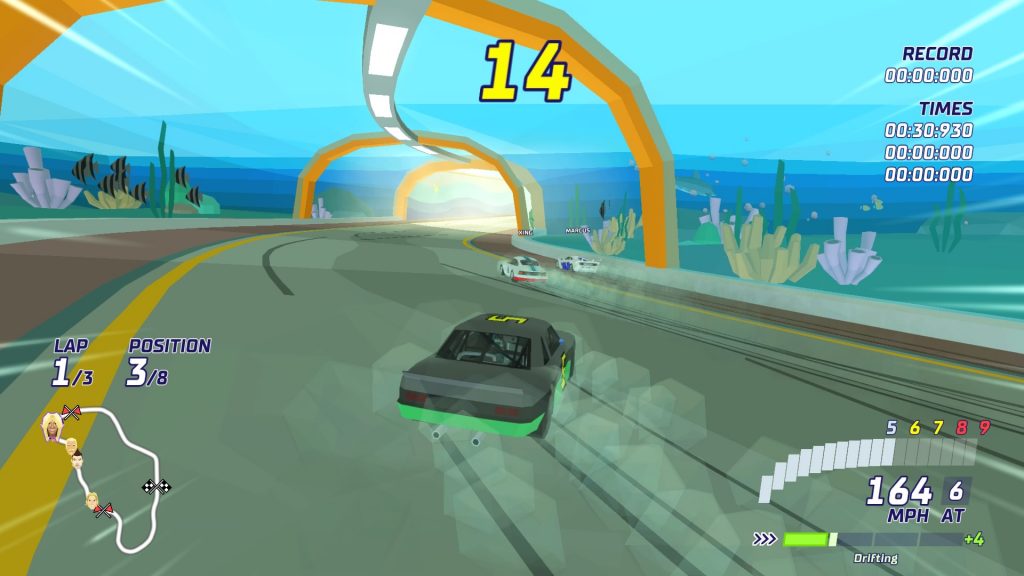 All these modes can be played in four player splitscreen, assuming you have sufficient controllers. Our co-op partner had great fun playing with us, but his attention wasn’t held too long. He’s a bit young so can be forgiven for losing focus. We did try to play one of the pre-arranged online multiplayer sessions, but apart from a solitary Italian we were the only people in one lobby. A little disappointing, but we look forward to losing horribly to real people post-launch.

Time Attack mode is an unexpectedly addictive mode, usually included as an afterthought. You can race default ghosts which present a fair challenge, but the fun part is downloading an online opponent’s ghost and racing them. There’s some fair leaderboard chasing to be had here. We’re just glad we got the trophy for beating an online ghost time before the pros filled the leaderboards with impossible times. 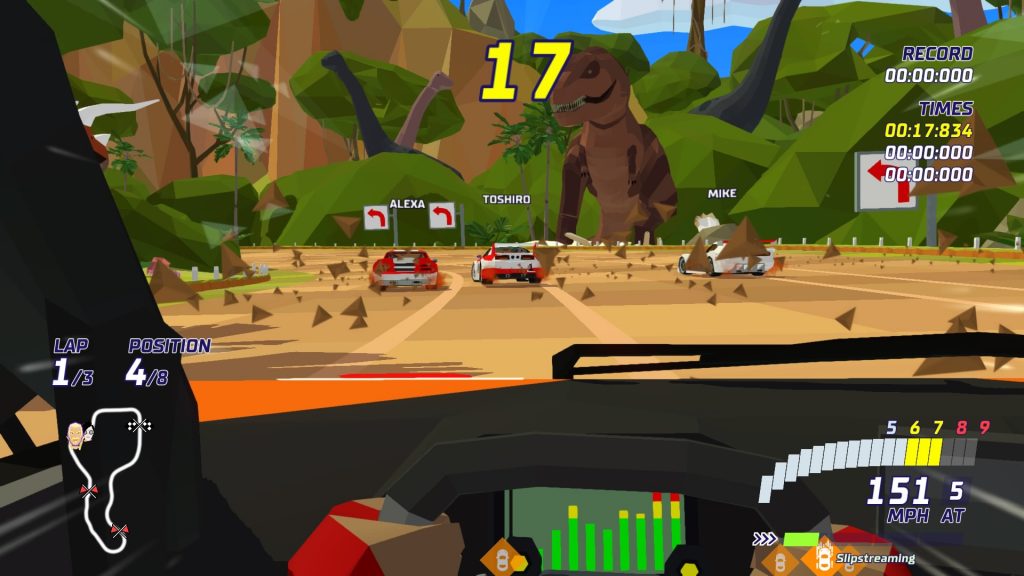 There’s five different view modes for your car: up close, chase camera, in-car, bonnet and first-person. All barring in-car are useful enough and you’re sure to find one that suits your play style. However in some cars, the in-car view is useless due to a very narrow window to look through. This is especially noticeable in the LMP type racers, moreso when the hand of your driver obscures your view further as you turn the corner. It renders our preferred view in racing games sadly a little redundant and we opted for the chase view instead most of the time. 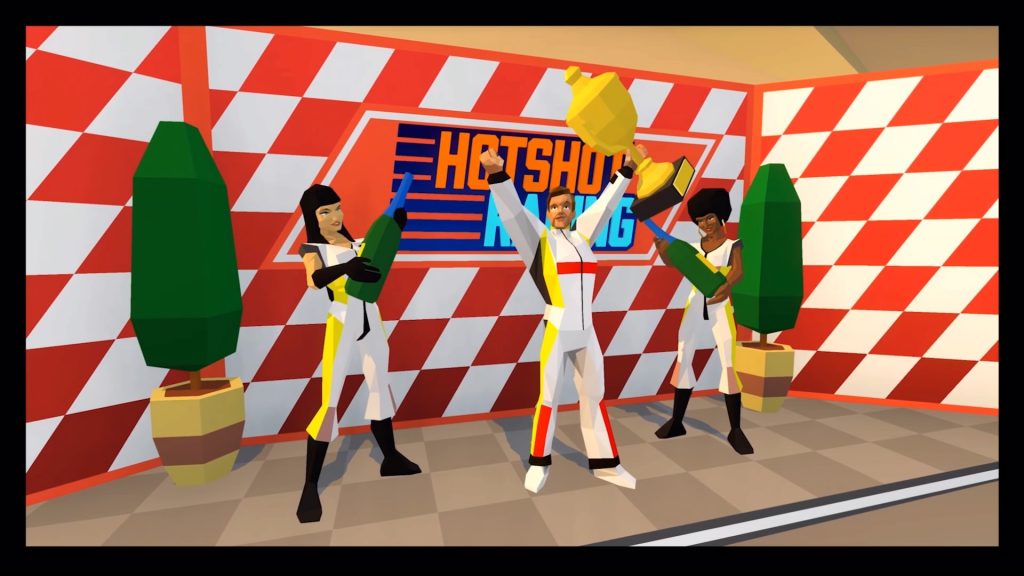 The music, general sound effects and announcer are very evocative of the era, though there’s nothing as memorable as the likes of Magical Sound Shower or Passing Breeze in the soundtrack. Perhaps less is more in terms of this kind of racing game.

In conclusion, Hotshot Racing is pretty much essential for fans of arcade racers, and at the price point you’d be mad not to pick it up. Sure, there’s a comparative lack of depth and the AI is a bit shunty, but Hotshot Racing is really rather good.

Hotshot Racing
8 Overall
Pros
+ Captures the look and feel of classic AM2 racing game a treat
+ Time Attack mode is a delight with online leaderboards to compete on
+ Four player splitscreen local play
+ Wonderfully evocative soundtrack and announcements
Cons
- Rubberbanding by AI racers is more like them attaching a bungee to your rear bumper
- In-car view is useless on some vehicles due to the obscured views from cockpits
- Arcade roots betrayed by a comparative lack of depth
- Expert difficulty is borderline impossible at the outset
Summary
Hotshot Racing (formerly known as Racing Apex) is a great arcade inspired racer that harks back to classic blue sky Sega arcade racing games. What it lacks in depth it more than makes up for in sheer fun. Split screen multiplayer and extra modes serve to make this a more than worthwhile purchase. Get on it.