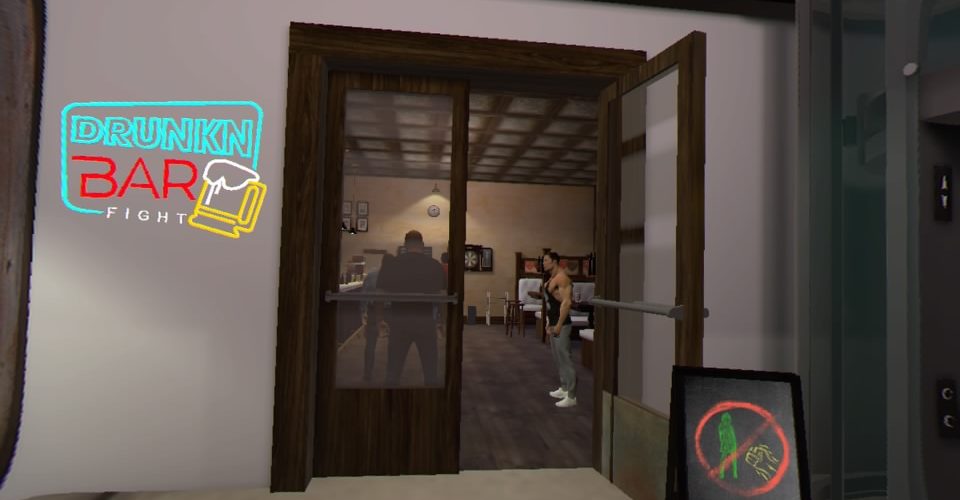 From The Munky comes Drunkn Bar Fight, a PSVR title that does exactly what it says on the tin. You’ll need two Move controllers to act as your fists and then you’re ready to ruin everyone else’s night. 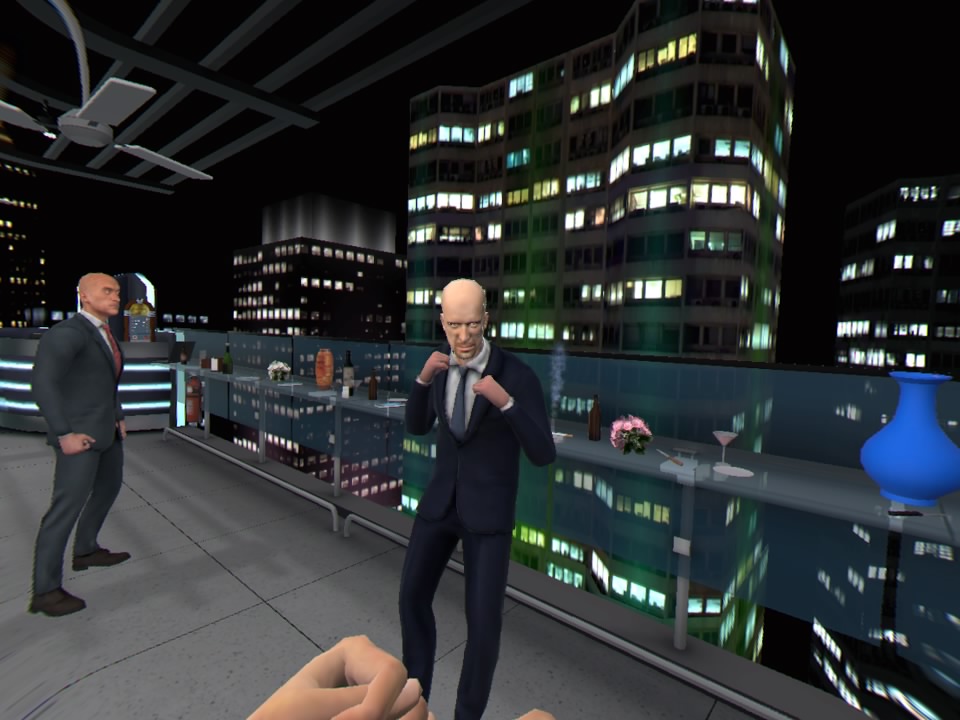 You may or may not have seen footage of Drunkn Bar Fight as it’s been in early access for a while on PC and is one of those titles that is arguably more fun to watch than to play. This is thanks to the jankier elements of the game that enhance, rather than detract, from the overall experience. Physics don’t always react as you might expect, AI ragdoll and struggle to find their feet in humorous ways and everything in general feels like it barely works. But it does, just barely.

You start outside with three options of bar to go to, all right next to one another. The one in front of you is a basic sports bar with a darts and accompanying board, pool cues and balls (but no table). To the left is a saloon themed bar with animal heads mounted on the walls and to the right is a lift that gives you access to a swanky rooftop bar with bottles of Champagne littered about. You can go into whichever you choose and then the game loads you into the environment.

The game doesn’t really explain much with regards to controls but a quick press of each button will see you right. The Move button on either controller moves you forward, the top row of buttons on each controller rotates you left or right (only smooth rotation is an option, in fact, there are no options comfort or otherwise) and the bottom row moves you backwards. The triggers let you grab things. 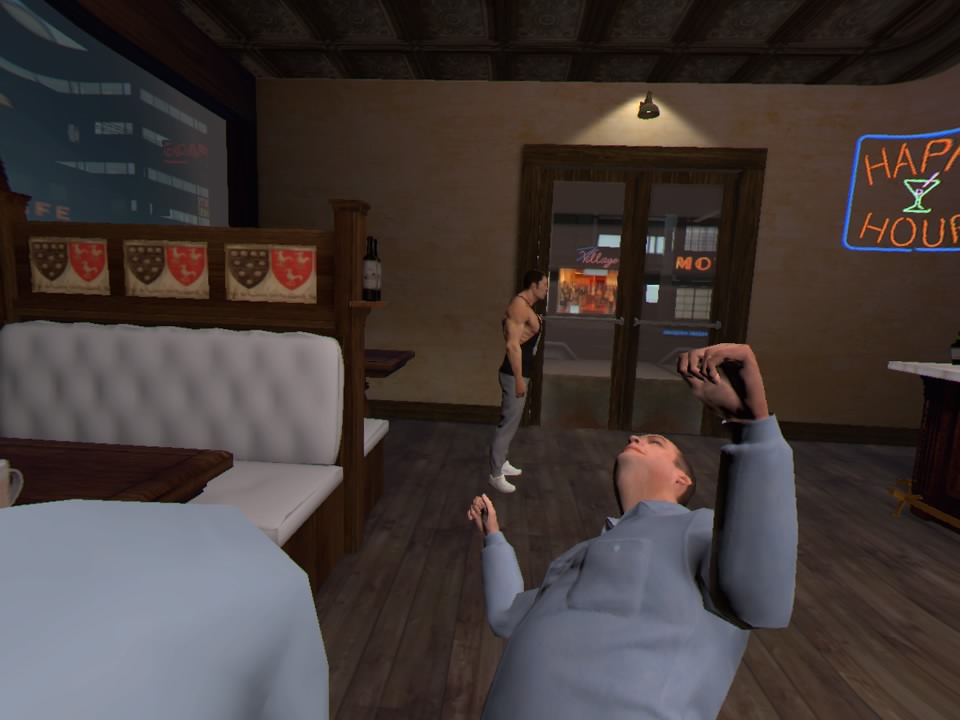 To start with it’ll usually just be you and one other customer. You can interact with the jukebox to change tunes and pick up items but your only real option is to start a fight. You can do this in a few different ways: just walk into them, throw objects or punches or it seems if you drink too much then they’ll want to throw down. They’ll raise their fists and start walking towards you and then it’s up to you how you take them down. Simple punch combos work, hitting different parts of the body make them react differently. You can pick up stools to smash over their heads, throw darts at them, break bottles across their skulls and spray fire extinguishes in their faces. If you can see it you can probably interact with and use it.

Your opponent may go down a few times but keep getting back up, but dole out enough punishment and you’ll eventually win as they crawl away. Then you can move onto the next scenario in the same bar or go back outside to try a new bar. Each stage adds new bar patrons who’ll sometimes attack you two on one and if there are women at the bar then you must avoid hitting them at all costs (even if they attack you) or face the wrath of everyone at the bar. 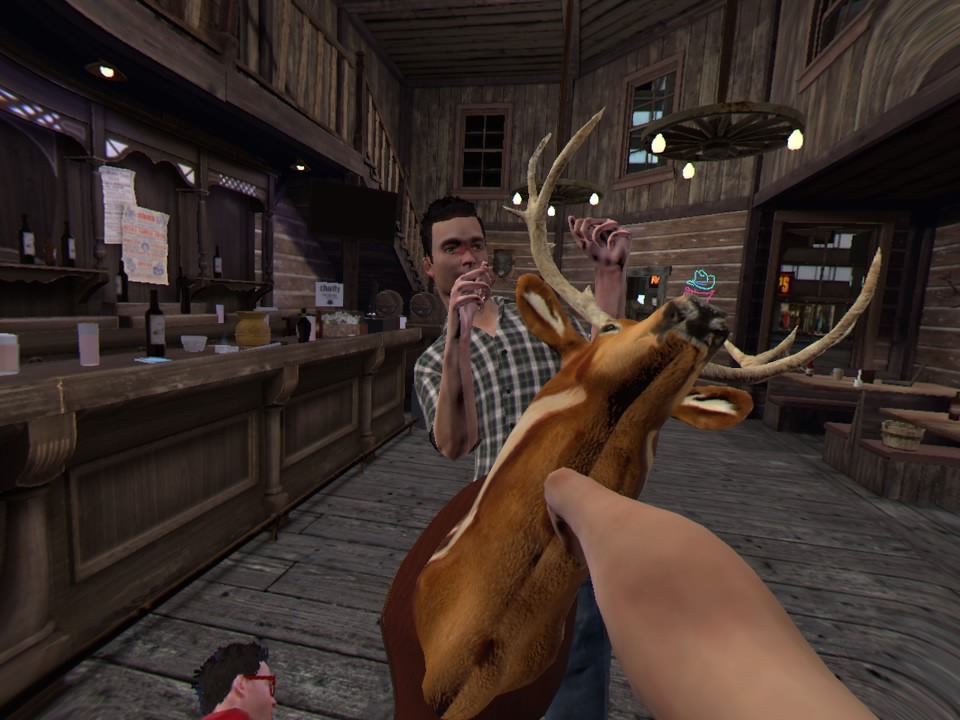 If you have real people around you then they can take control of the AI characters through the social screen with up to four players taking you on. It’s with others that the silliness of this title will shine. Sure, in single player it’s amusing to watch AI trip over each other as they crawl away or punching someone in such a way that they go flying through a window only to magically float their way back into the bar across all the furniture, but grabbing a downed enemy and dragging them across the bar top is only really amusing the first time. The different environments don’t offer enough variety as far as interactive elements to make much of a difference either.

You can play through each bar’s selection of fights in under an hour at which point the game simply asks you to press a button to reset all the bars back to the first fight again. £10.99 isn’t expensive but for such a shallow experience is still maybe a bit too much. The visuals scream low budget too, with some bad character models on top of the suspect animation and physics. 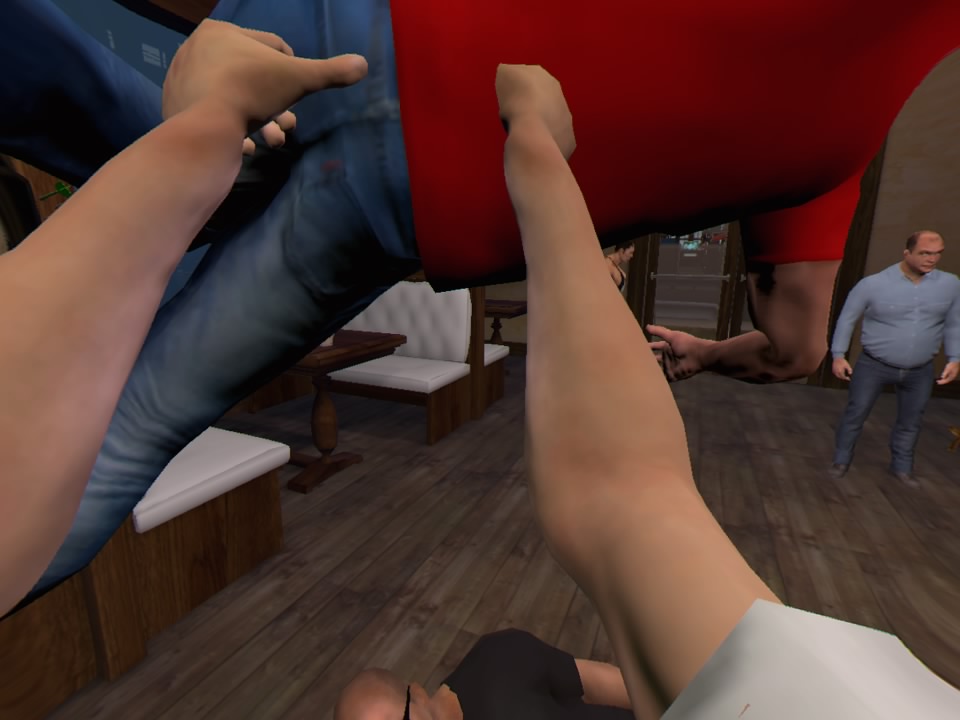 Drunkn Bar Fight is a silly bit of fun, especially if you have people around you to share the experience with. If everything worked perfectly then it wouldn’t be as amusing, but the fact that everything is just on the verge of collapsing in on itself makes a shallow, straight forward game into something a little more chaotic. If you know what you’re getting into then there is fun here but don’t expect it to keep you occupied for too long.

Drunkn Bar Fight
5 Overall
Pros
+ Chaotic fun
+ Lots to interact with
+ Up to four players can join in locally
Cons
- Not much variety
- Very short
- Only just holds it together technically
Summary
Drunkn Bar Fight is a very silly game that barely holds together as you swing punches, stools and beer bottles at bar patrons. It's these unexpected moments that make the game fun however, especially if you have other people to play with locally. There's not a huge amount of content though and the joke struggles to hold your attention for too long.