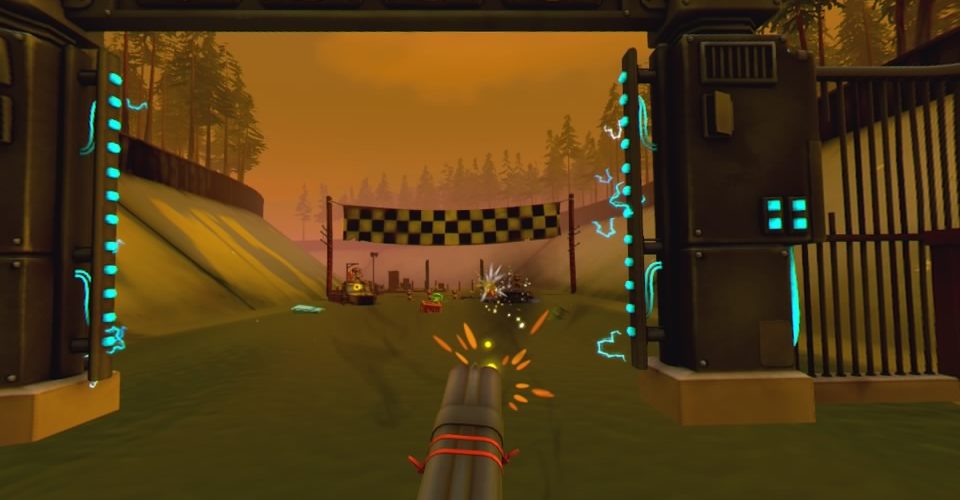 Dick Wilde 2 is an on-rails lightgun-style shooter for PSVR. When London-based coders Playstack released the original Dick Wilde onto PSN back in 2017 the general concensus was that it had the makings of being a fun shooter but was derailed somewhat by its punishing level of difficulty and so we were a little tredipatious about this review.

The premise behind Dick Wilde 2 is that you are a sort of ecologically sound hunting trip. That is to say that you drift along a river on a boat and you have to shoot small animals in the face while also clearing out the debris in the water. You do this by pointing your gun at them and pulling the trigger, essentially making this the natural evolution to Nintendo’s original Duck Hunt. 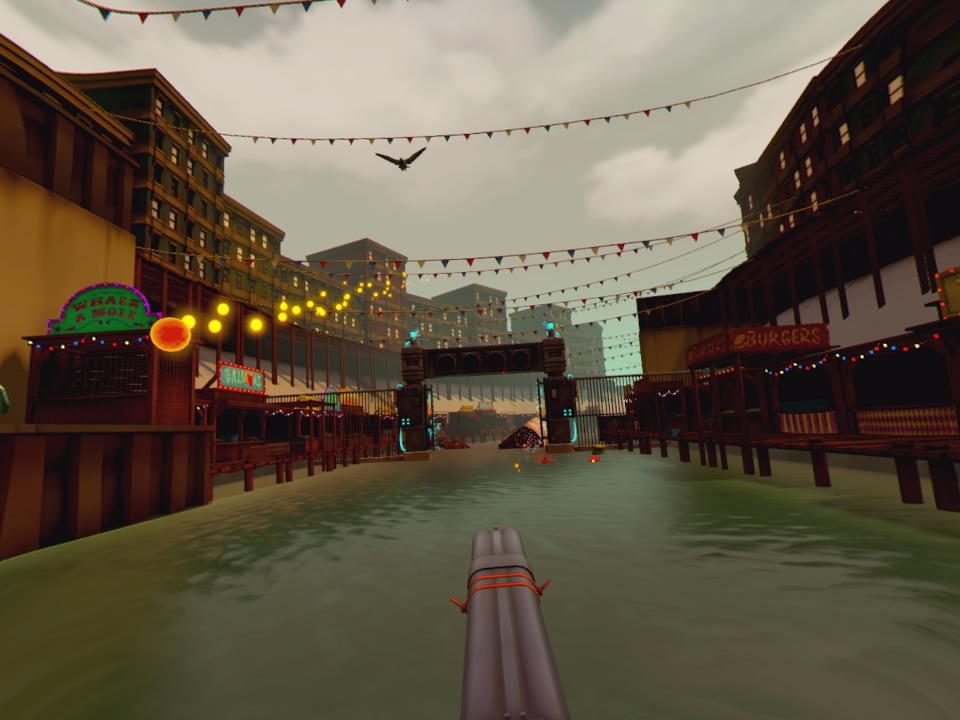 You have no control over the pace or direction of travel though and instead all you can do is shoot and physically dodge attacks. Success becomes about managing your enemies while also taking time to clear out the river because doing that earns you money, which in turn lets you buy new weapons and power-ups.

The game can be played with the Aim controller or with dual Move controllers which gives you an extra gun of course and aside from mashing the trigger, you can press

to activate a powered up state but that’s about as sophisticated as the controls get. Weirdly, the power up function is super unhelpful and is worse than a few of the weapons on offer. 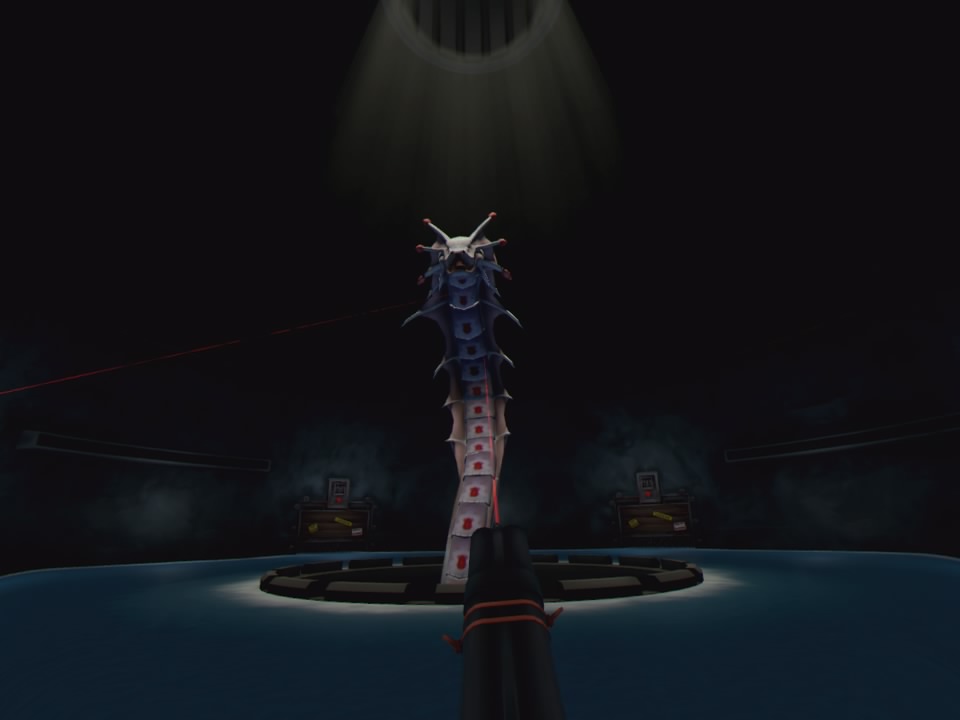 Each level is built up of branching paths with checkpoints in between. There you can spend the money you’ve earned and invariably the hardest part of each level is the start because once you’ve survived that and spent some money, you’ll be in much better shape and each time you beat a level, you’ll increase your starting money for levels in that world and so pretty soon you can buy a new weapon before you even set off.

The levels also include a scattering of keys. These unlock later levels but do require you play each stage a few times to reach all of them, which does increase the longevity a fair bit but does feel like it is padding things out. Especially as the levels are all pretty samey, just using a small handful of basic environment templates. 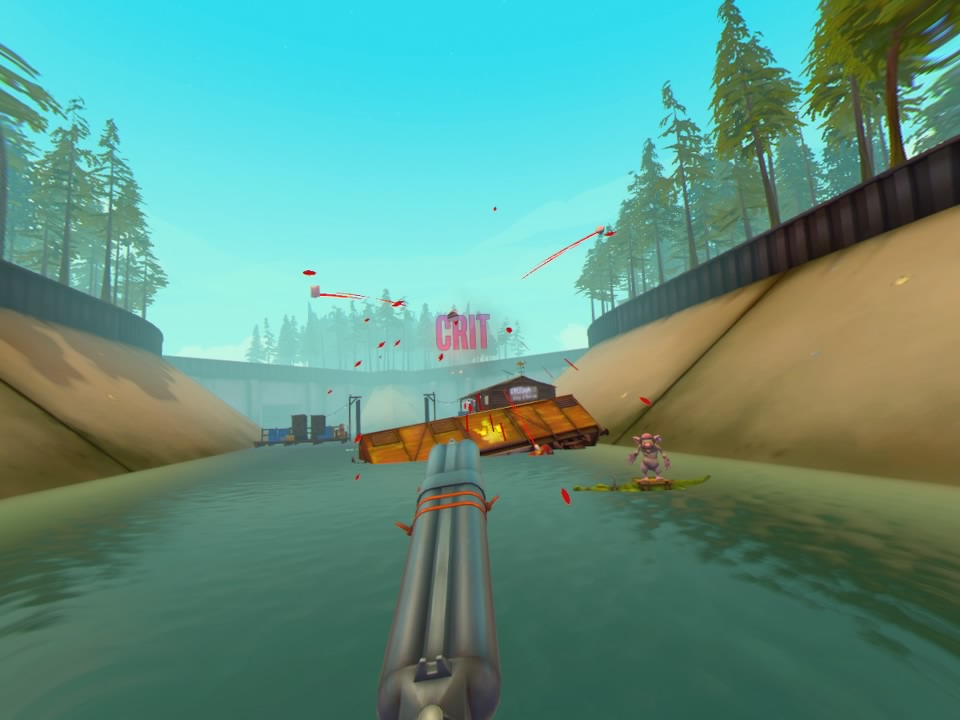 It’s not like Outrun where each branch took you to a radically different setting. You’ll be hard-pressed to spot any meaningful changes between a left path and a right one beyond the placement of enemies, which makes the entire thing feel like an artificial way to increase the game’s length. Suffice to say, we aren’t big fans of this approach. Especially when you miss a key and condemn yourself to having to play the same level for a fourth or fifth time.

The levels are set across three worlds, each with a handful of main levels, a boss level and a selection of ‘trials’ which are more direct stages that have to be completed with a specific weapon. Beat the stage and you unlock the weapon for use in the rest of the game. 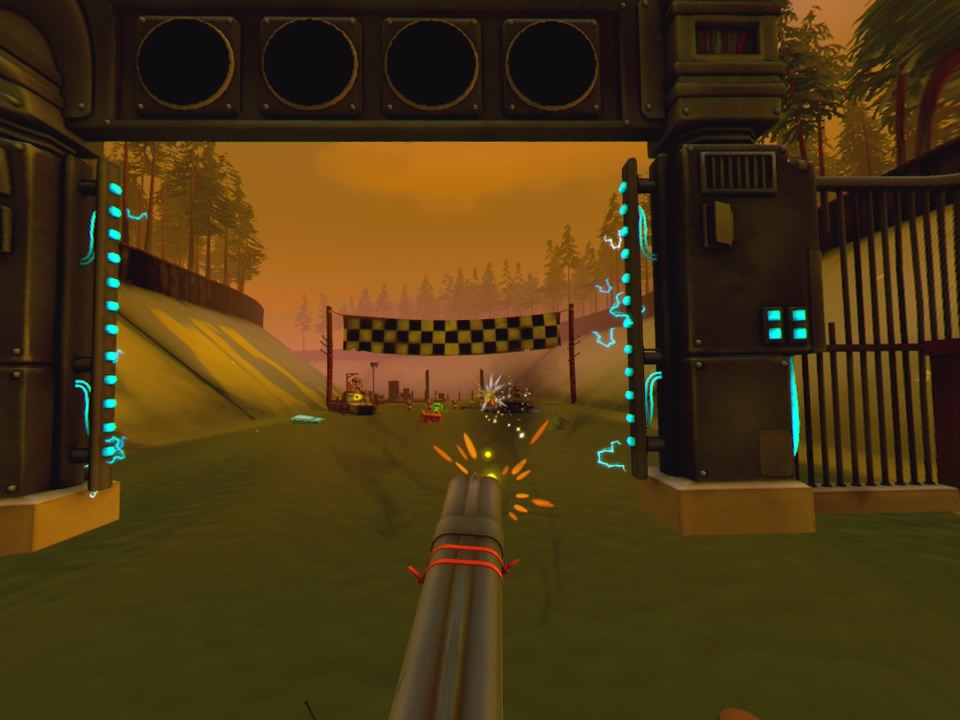 This leads to another big concern with the game which is that the weapon progression is seriously lacking. I’ve personally stuck with the original shotgun, finding all the later versions to be woefully lacking. One of them fires solitary darts which do poison damage but how is that in any way a shotgun? The uzi weapons are little better in terms of their progression but the original shotgun trumps all of them. The more experimental ‘energy’ weapons are all dreadful. Your mileage may vary but it was definitely our experience that the majority of unlockable guns in the game were worthless.

As we said previously, the big knock against the original Dick Wilde was the savage level of difficulty. Initially it seemed as though this game would be the same, with the third level proving to be a stumbling block initially and later levels providing some serious difficulty spikes. However, Dick Wilde 2‘s best new feature is the online co-op which allows two players to share the challenge. 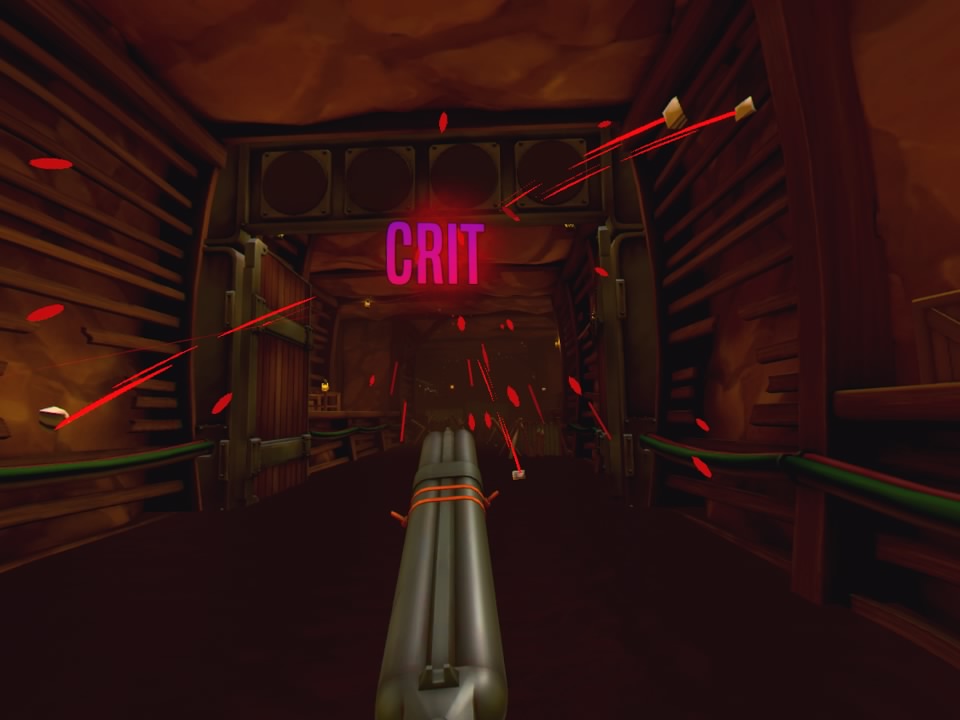 While we found singleplayer to be rather unenjoyable, most games are improved by co-op and that’s definitely the case here with the two of us (I was joined by PSC’s Gareth) doing our best to divide up the damage and cover each other during tricky secions. It did make the game considerably easier, although the weapon trials were the main sticking point because of the aforementioned rubbish weapons.

The presentation is fairly mediocre. Visually there’s a nice sense of scale what with you being outdoors for most of the game but the cartoony visual style is quite bland and the VR doesn’t really pop in the game. Sound is, as you’d expect, mostly banjo music with Dick Wilde, the shopkeeper in the game, making quips that were initially funny (especially when he takes the piss out of EA and Bethesda’s recent missteps) but repeat far too often. 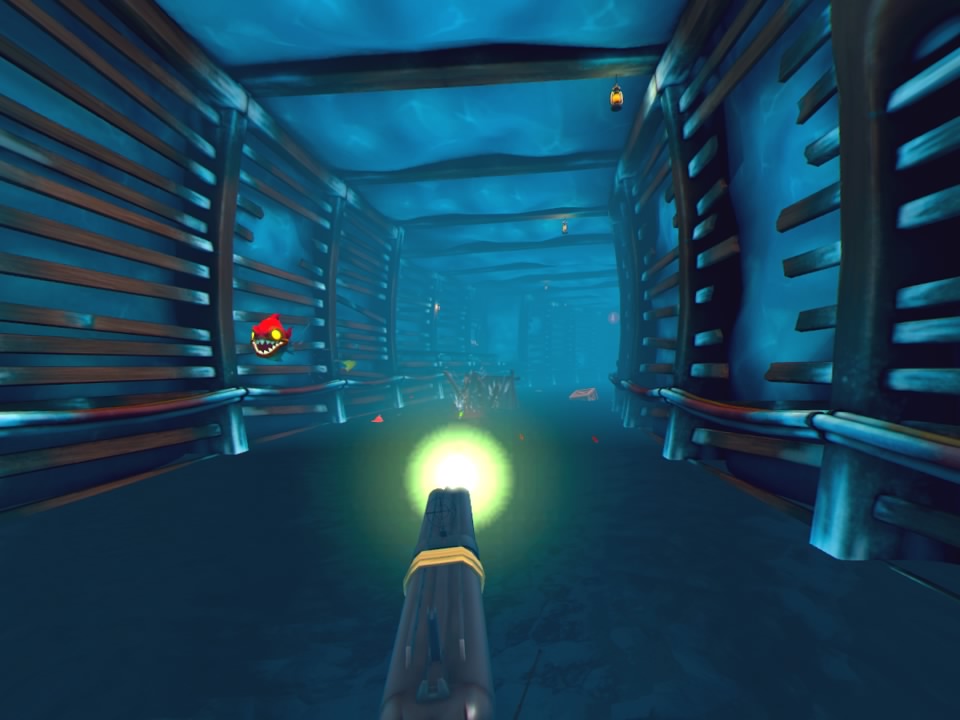 So, in the end we’re left with a competent game but one that doesn’t do anything particularly interesting and simply doesn’t build in terms of drama, progression or visuals. The artificially padded out length starts to work against it pretty quickly and solo players will no doubt find it to be a frustrating experience.

However, as a co-op shooter it stands out as a bit of a rarity in the PSVR gaming space and as Aim users we were glad for the support there but there is definitely a sense that Dick Wilde 2 could, and should, have been a better game and is a just a little bit of care and attention away from being very good.

Dick Wilde 2
6 Overall
Pros
+ Enjoyable online co-op
+ Frantic shooting action
+ Aim support
Cons
- Plain presentation
- Badly thought out weapon selection
- Too hard in single player
- Humour is very repetitive
- Route choices offer no variation
Summary
Dick Wilde 2 is a VR shooter that is average in every respect and is just a few decisions away from being a game we'd recommend but for all of its failings, it is redeemed by its fun online co-op.