Invader Studios have certainly tattooed an influence firmly on Daymare 1998. The title screen, gameplay and tone take huge nods towards Capcom’s Resident Evil series. Indeed, this project originally began as a fan-made remake of Resident Evil 2. It just about gets away with it being a loving homage but there’s some aspects lacking quality which hinder and, in some cases add to the game’s charm. 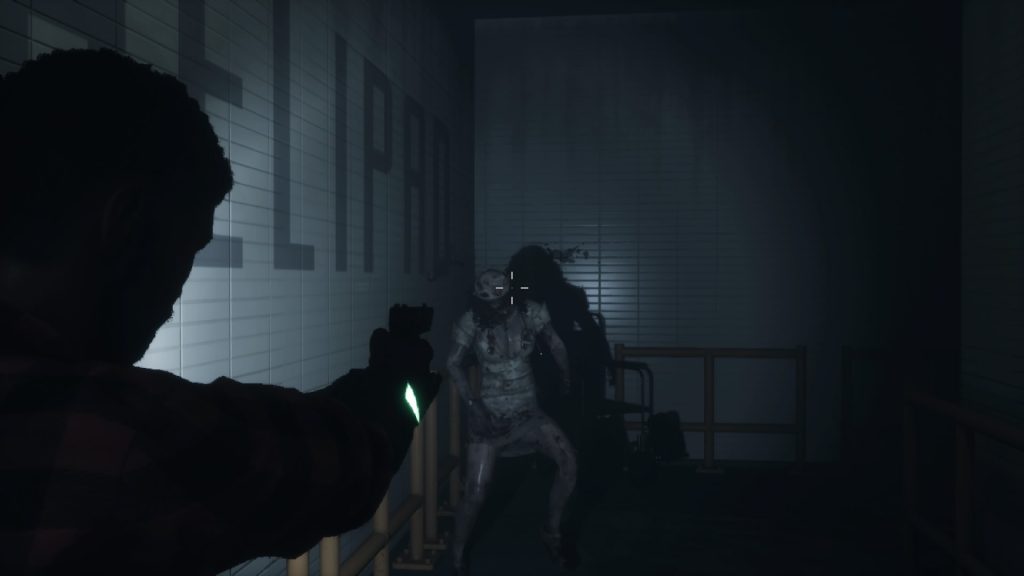 For starters, the plot is very much a B-movie effort of black ops clean-up crews moving into a facility where science has run amok. A gas has been released that appears to have turned the populous of Keen Sight into a shambling hoard. On top of that, there’s bigger monstrosities roaming the corridors to thwart our protagonists. You play multiple characters over five chapters. Firstly as two members of the Hexacore Advanced Division for Extraction and Search. HADES are effectively Hexacore’s cleaners looking to contain the incident.

It’s an interesting position to put the player in as you effectively begin as the bad guys. Motivations change over time and this does allow for the story to grow in ways that you don’t usually see in survival horror. Rounding out the trio is Samuel Walker, a forest ranger who stumbles into the mess after a family tragedy. All three have their part to play and it does keep locales and perspectives fresh. There’s twists to come and I did enjoy the story for the cheesy tale it was. Liev shows a lot more cartoon villainy whilst Raven’s more repentant.

There is a consistent, fun tone to it which is assisted by some hammed up dialogue. There’s some fun writing and scenes that can’t help but raise a smile from me. There’s some daft one-liners, comical moments of violence and Daymare 1998 knows not to take itself too seriously. The actors all play their roles competently and it’s surprising that none of it feels out of place. 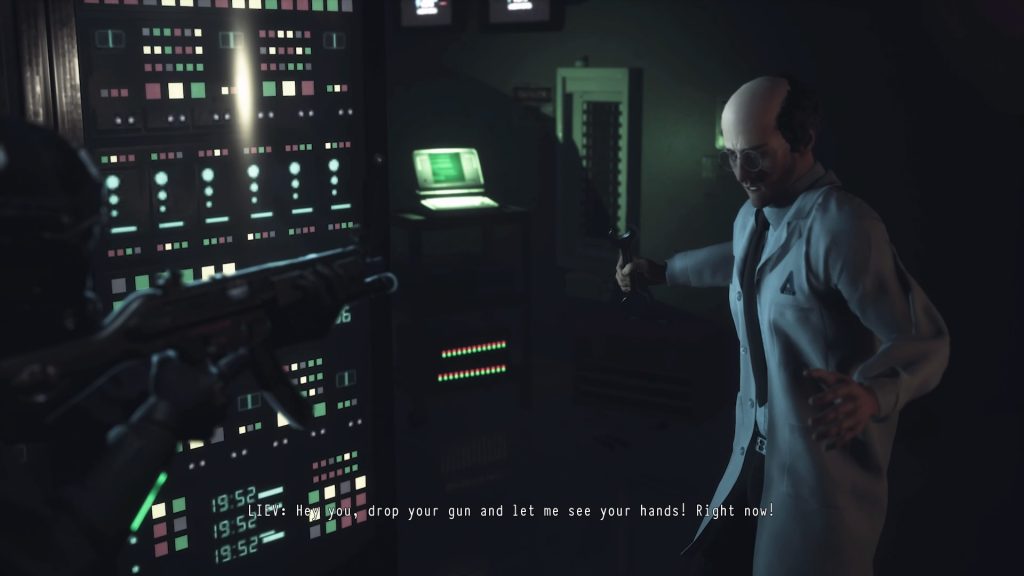 Where the quality does slip is in the visuals. It varies wildly in terms of quality. Some of the cutscenes between chapters look fairly pristine and polished. In gameplay, it looks a lot more rugged. Textures pop in and there’s a lot less fidelity. Most of Daymare 1998‘s visuals are coated in darkness which does allow for some serviceable lighting. Monster designs are all humanoid in nature and there’s a definite feeling of cheapness when it comes to production values. One might say it’s in-keeping with the storytelling but, given how solid the cutscenes can look, it’s a shame that hasn’t carried over into gameplay.

Gameplay which follows the modern Resident Evil template. Combat is viewed over the shoulder, third-person shooting which is mostly consistent. You only get three weapons to toy with across the three characters. Everyone has a standard pistol, a shotgun and a hand cannon. You’ll switch between them depending on the job at hand. Shotgun blasts are great for crowds and close range whilst your pistols can take out the fodder.

Shooting feels fine and occasionally punchy. Shotguns feel powerful and even your pistols sound like they’ll do harm. You do have access to more damaging ammo and, whilst ammo management is an apparent concern, I never found myself short in fight. Inventory management is more of a constant pressure. The pistols have an interesting mechanic when it comes to reloading. In the heat of battle, you can reload with a button press. This allows you to stock up with any magazines you have handy, providing they’re full. You can’t reload an empty magazine so you need to keep them stocked just in case. 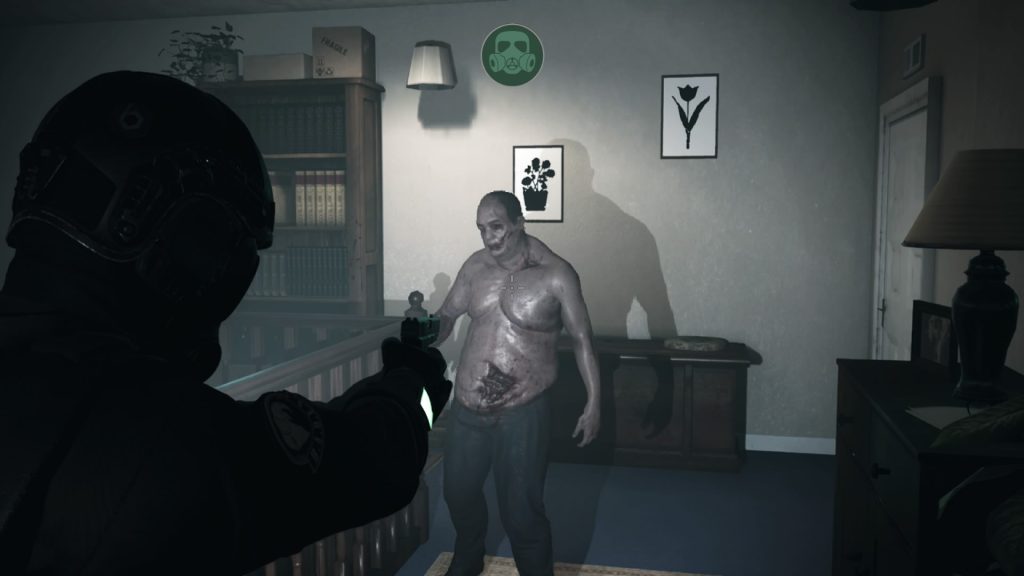 It’s a very intriguing layer on a mechanic we take for granted. For the other weapons, you can reload without punishment but given your most basic weapon a more complex operation does add some tension. Health items can be combined to create more powerful concoctions and you have supplements to aid your mental and armour capabilities. It leads to an inventory system you’re constantly trying to stay on top of which I enjoy.

Level design is where the homage continues. At times, this might as well be Raccoon City. You’ll visit hospitals, science labs and engage zombies at street level. Whilst the changing of characters does allow for scenery to change, the majority of them have a fairly linear quality to them. There’s items just off to the side to allow for some exploration but, you’re mostly funnelled through environments. Puzzles range from standard valves and switches to the odd logic puzzle. Solutions are usually nearby and not too taxing.

Some areas give you room to dodge zombies but I mostly found fighting them to be the surest bet. There are moments where enemies are placed right on corners. Most of Daymare 1998 takes place in relatively silence so you’ll hear enemies before they come into view. There’s time to plan an encounter with only a few tougher foes able to rush you. It leads to some frustration and health items are hard to come by. 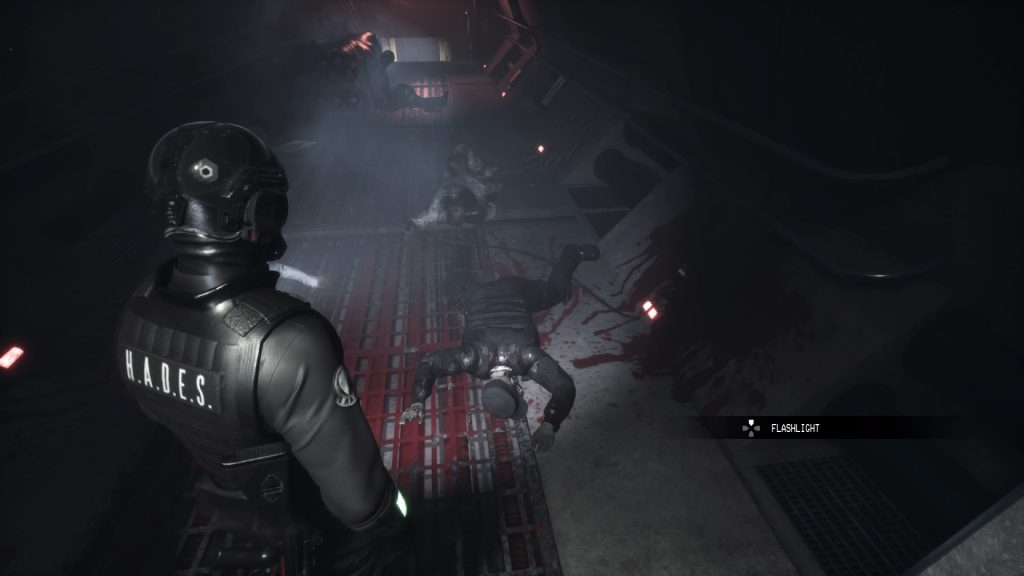 Boss encounters are few and far between and they don’t tend to offer much beyond larger versions of enemies you’ve already fought. The exception being the final boss which is an elongated scrap. It’s tedious to fight and can really zap your enthusiasm in the home stretch. There’s a lack of invention at times.

I’ve warmed to Daymare 1998. Originally, it felt like a crude inposter but, the more I spend with it, the more I appreciate Invader Studios’ efforts. It’s rough, occasionally clumsy and linear but it does bring its own ideas to the table. It’s a shame they don’t bring more in terms of area and enemy design. In that respect,  it struggles from beginning as a fan-made remake to deliver something with an identity of its own.

Daymare 1998
6 Overall
Pros
+ Cheesy writing helps give off a campy tone.
+ The reload mechanic adds complexity and tension to combat.
+ There's a creepy sense of atmosphere throughout.
+ Decently paced with the switching characters keeping things fresh.
Cons
- Lacks polish across the board.
- Environmental design looks stale and bland.
- Enemy and boss design underwhelms.
- It really struggles to stand apart from its fan-made origins.
Summary
Daymare 1998 wears its influence firmly and proudly. It's a decision that stifles creativity and invention when it comes to enemy and environmental design. Whilst a poor imitation in terms of quality and polish, there's some charm to this. The voice acting and writing have an appropriately goofy tone whilst the combat is competent. It feels too linear for my liking but the inventory management has some interesting quirks.