I’ve never really bought into the whole Pixar thing. Computer animation always feels too cold and clinical to me and anyway all these films have the same plot and I’m not ten years old. The games are usually good for an easy trophy/achievement set and not much more. So when Cars 3: Driven to Win showed up in my review pile, I wasn’t expecting much from it.

The game ties in with the new movie, Cars 3, but gives the story the minimum of attention and instead focuses more on giving you a Mario Kart style racer instead. There are key races from the film that you can have but you can play these as any car, not just Lightning McQueen the film’s main character, and still advance the story. 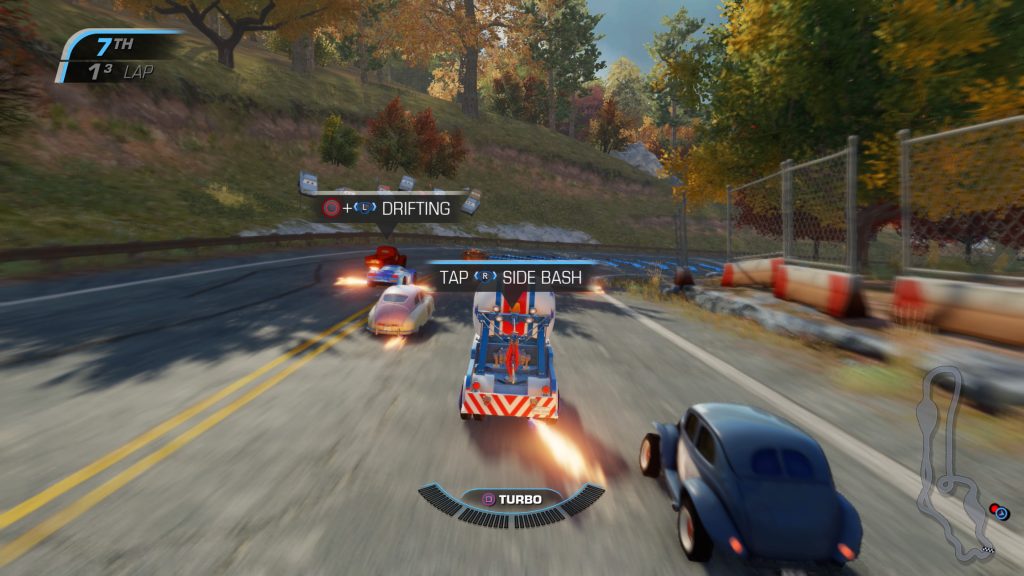 You can pretty much forget about the story and just focus on the content and thankfully Cars 3: Driven to Win has plenty. The main structure of the game is based around the ‘Events’ part of the menu.

Here you can take part in regular races, battle races (which are races with weapons), stunt events, best lap time trials and takedown battles (which see you rampaging through a packed field of drone cars). These different types of events all offer different twists to the gameplay and none of them are unenjoyable thanks to the decent on-track action.

The controls are deeper than you might imagine for what appears to be a kids’ game. Aside from the standard racing mechanics, the game also has a good drift system and the right analog stick is mapped to four basic tricks in the air (front flip, back flip, spin and barrel roll) while on the ground it allows you to switch to backwards driving mode or puts you up on two wheels. Moving it left and right lets you bash into your opponents as well, scuppering their showboating attempts. 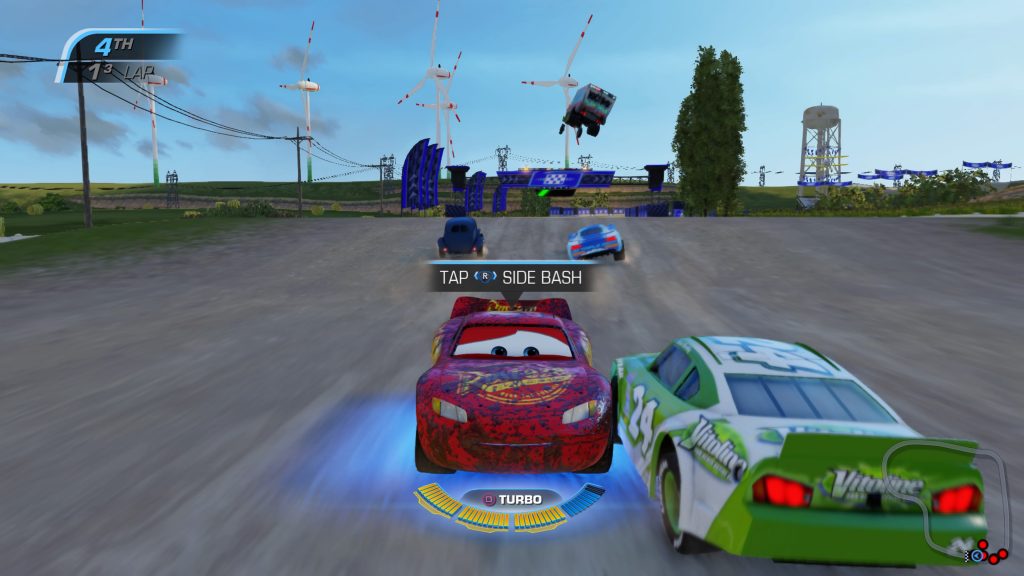 All of this flashy driving increases your boost meter – and certain parts of the track will increase it faster if you pull the right trick there – and you can either use this for a quick turbo charge or let it fill up before you activate. This will put you ‘in the zone’ and gives you a sustained turbo charge and allows you to ram enemies.

It all handles very well. The drifting is simplified compared to the likes of the Ridge Racer games but feels natural and the trick stuff isn’t going to require the dexterity of a Tony Hawk game and it fits in reasonably well too.

Interestingly, while most of the game won’t put up too stiff a challenge for people going for the platinum, the best lap challenges are oddly tough. You’ll have to plan your use of boost smartly and put in a very efficient lap if you want to get three stars on any of the tracks and it is here where you’ll really rely on the drifting and ground tricks in order to shave the required seconds off of your best lap time.

Aside from the star rating on all the events, the game also has a large list of challenges called ‘skill checks’ and these are in-game achievements that ask for such things as taking out multiple enemies with certain weapons, completing laps in backwards driving mode and various over a hundred other tasks. These are necessary if you want to max out the trophies but they also unlock new characters to drive as. 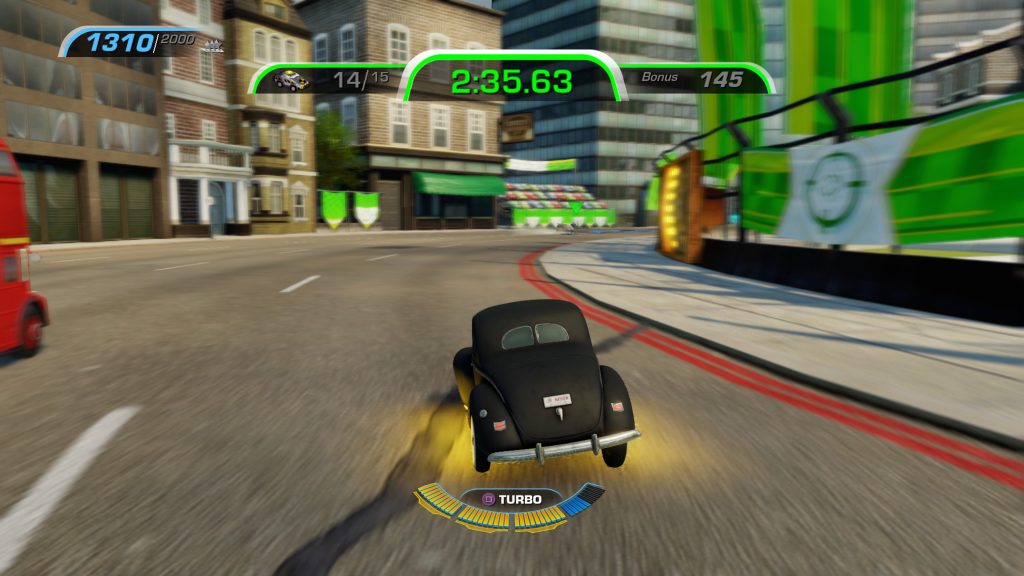 There are lots of characters to unlock and these add some graphical variation to the game but all handle the same which is a shame as it’d be good to have cars that were built more for speed, battles or stunts as appropriate. Kids will be happy that they can play as their favourite car though.

Having played a bunch of these type of racers over the years and more recently having reviewed VR Karts, it’s nice to get one that isn’t an indie effort with average graphics. Cars 3: Driven to Win absolutely looks the part. The visuals are clean and colourful and the tracks have some nice elements to them such as the giant planes you have to avoid on the airport track or huge construction vehicles in the mines. 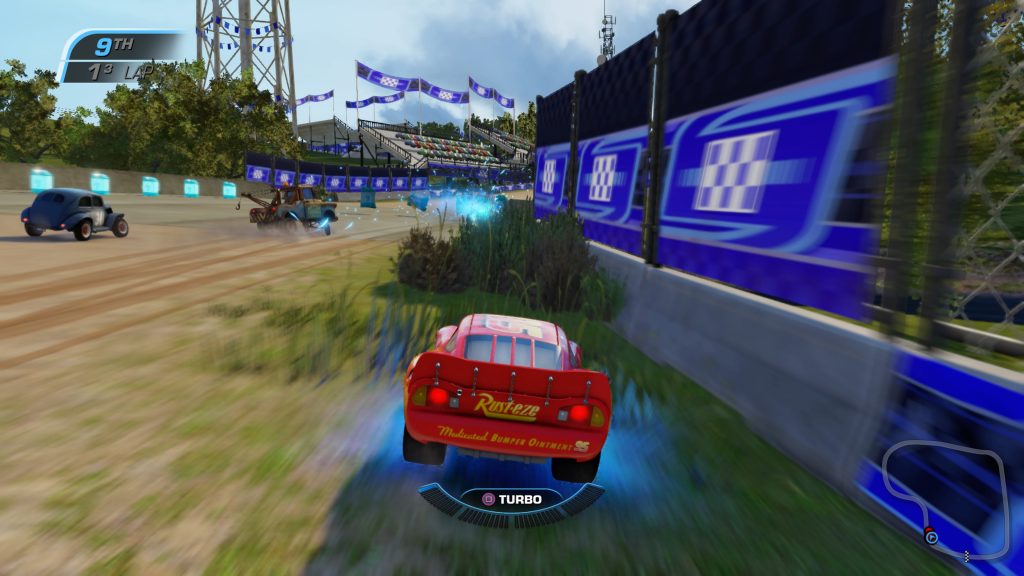 While it may not have the character and iconic feel that the Sonic and Sega Racing games had, it’s certainly on that path and it adds a bit of excitement to the tracks which are already nicely designed. The game includes tracks from previous games (as well as mirrored variants) and there are plenty of them to get through. Many of the tracks work best in racing mode rather than for stunts and battle races but none of them absolutely fail in any mode.

Cars 3: Driven to Win has surprised me. It has very good production values and lots of content too. Most importantly, it’s fun and very playable. It may not be up there with the very best of the genre and it might be a tad challenging for the target audience but I’ve enjoyed it way more than I ever expected to.

Cars 3: Driven to Win
8 Overall
Pros
+ Good racing controls
+ Who doesn't love drifting?
+ Well-presented visuals
+ Plenty of content
+ Has enough of a challenge to not be a complete walkover.
Cons
- Might be a bit too tricky for kids
- Story moments are few and far between
Summary
As far as racing games for kids go, Cars 3: Driven to Win is surprisingly good. It looks good, handles well and has enough content to keep you and your young 'uns entertained for a long time.