After Attack of the Toy Tanks by Petite Games by way of Ratalaika just over a week ago, comes Bouncy Bullets from the same developer, also published by Ratalaika Games. Perhaps next week we’ll get a game beginning with C?

At any rate, what we have here is a 3D puzzle platformer with occasional shooting across eighty four levels in total broken across six chapters of fourteen. It all starts off prosaically enough, but as the devs introduce new mechanics the challenge ramps up somewhat. 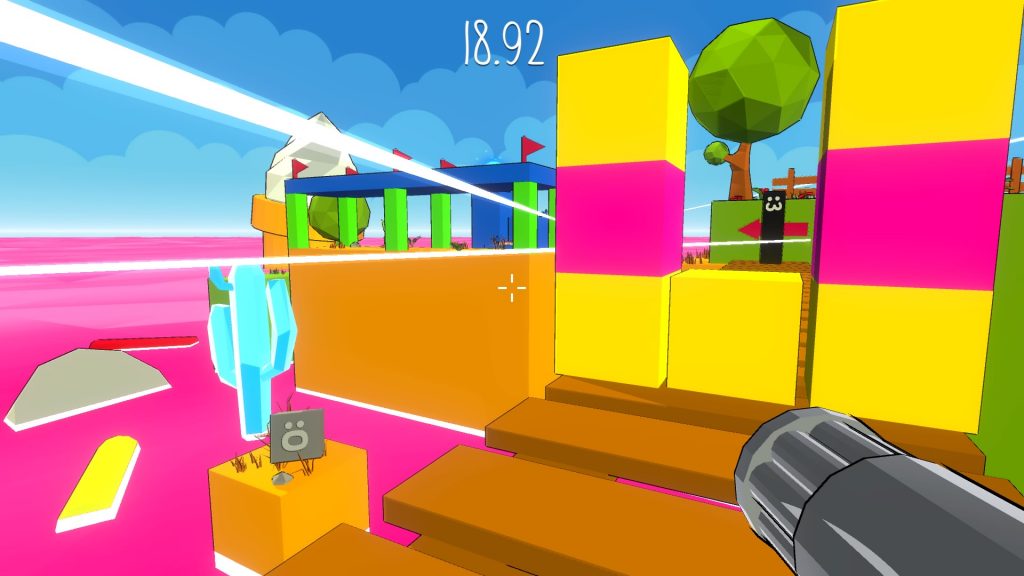 You jump from one platform to another, avoid environmental hazards from static lasers, spikes and the like. Later levels bring lasers that scan across levels that you have to avoid. When combined with the enemies that shoot you on sight,  the challenge soon ramps up.

Graphically uncomplicated, the levels are themed largely with a confectionery flavour, ice cream scenery and pink candy seas for example. Along with synth music Bouncy Bullets is definitely retro flavoured, bringing to mind late-era PS1 and early PS2 games in terms of feel. 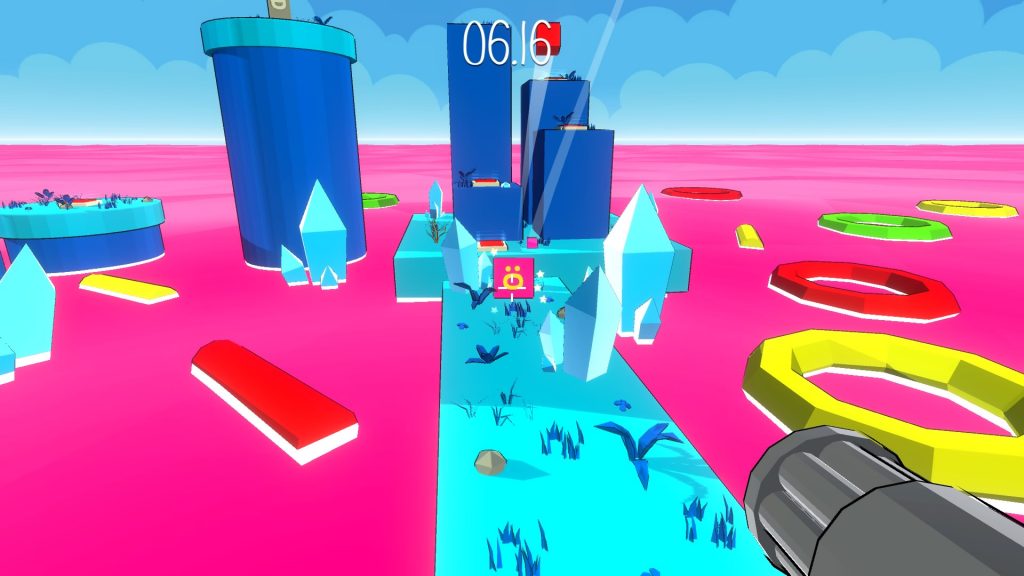 Aping mechanics from the likes of Ikaruga, only yellow bullets (

)  are the only tool for pink enemies. The titular bouncy bullets though can knock enemies backwards and off platforms, but that’s more of an attritional approach that won’t serve you too well.

There are three distinct enemy types, yellow short range, pink long range and black who can be targetted by either bullet type. They usually have a deadeye aim too, so pose the biggest threat. Sometimes you’ll do as well to pop out of cover and dispatch enemies rather than facing them in a direct fight and generally inevitable restart. 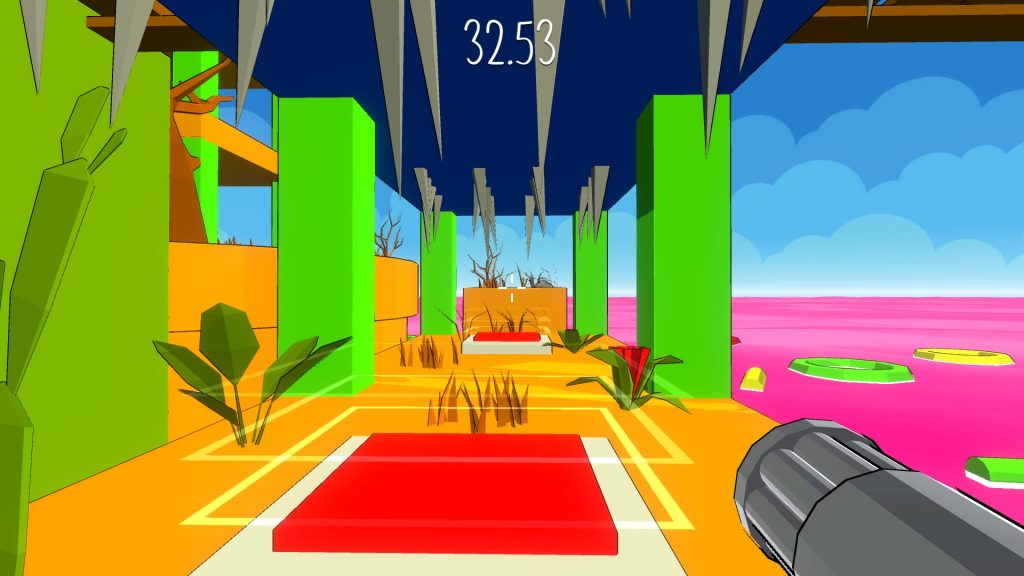 On occasion you’ll have enemies that alternate between being pink and yellow, others requiring two hits to dispatch, one pink shot, then one yellow. Along with some occasionally fiendish level design, especially in the secondary special levels, you’ll do well to finish some of the stages, let alone get a three star rating. To complicate matters further, there’s grey neutrals you can’t kill, an instant level failure being the penalty.

Talking of the secondary levels, think of them as a remix album of the main levels as you’ll find the level layouts very familiar, just with different enemy placement and additional hazards. Typically lasers or spinning saw blades. 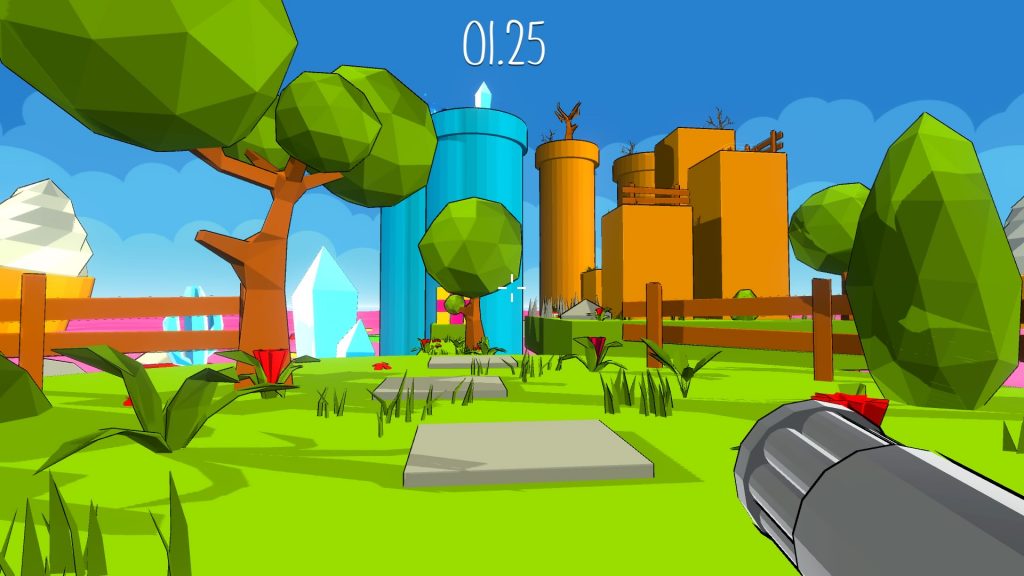 In the usual Ratalaika fashion this is a crossbuy release on PS Vita as well as PS4, but due to finicky controls on Vita you’ll be especially frustrated on level ten in particular, it being no picnic on PS4 either. The key difference being the twin sticks try their level best to ape the Dual Shock control scheme but their relative lack of control finesse makes for a generally frustrating experience.

Again, being a Ratalaika release you can have a platinum having played a mere thirty one of the eighty four levels on offer. It’s a fairly typical Rata-rinse  to the extent we’ll file it on our Vita in a folder of the same name to play later, as Bouncy Bullets is fun enough to revisit long after the last trophies have been unlocked. The only annoyance being the fact the Vita port isn’t quite up to the usual level due to the controls. 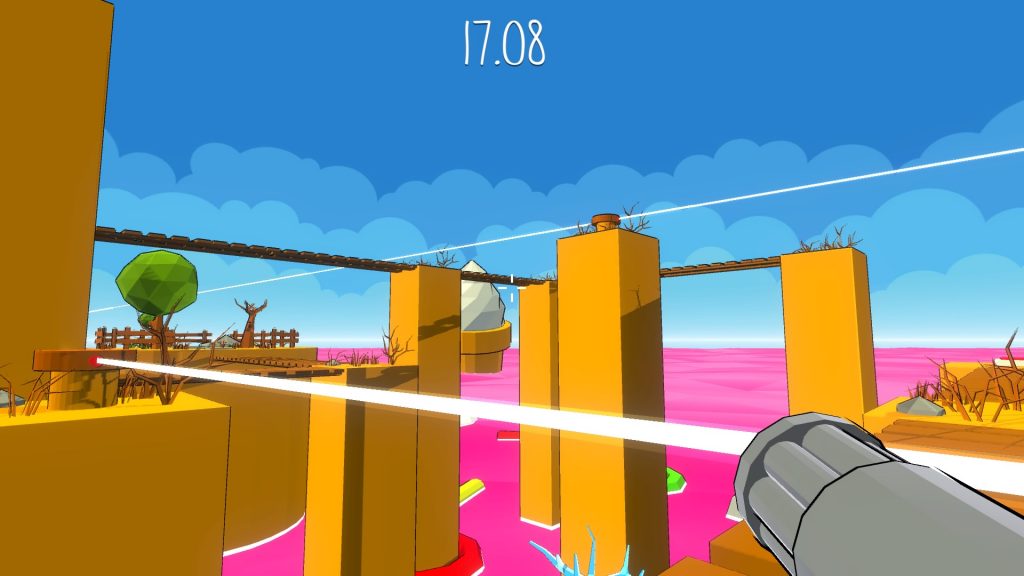 In conclusion, Bouncy Bullets is a fun puzzle platformer with a few levels that are tricky to negotiate. Typically for a Ratalaika game, you’ll be done well before finishing all the game has to offer, but you’d do well to see it out.

Bouncy Bullets
7 Overall
Pros
+ Great value proposition with eighty four levels on both PS4 and Vita
+ Gameplay is fun enough that you'll want to continue after the last trophy unlock
+ Some levels are fiendish gauntlets that will test your dexterity
Cons
- Some levels are absurdly tricky, others trivial. Level 10 can fuck right off.
- A better fit on PS4 than Vita due to control issues
- As is typical, better than a one and done once you've got the platinum
Summary
Bouncy Bullets is the latest Ratalaika release. This time we have a puzzle platformer with light shooting. As per usual, it's a crossbuy with both PS4 and Vita versions included, the latter port being not quite so fluid due to control scheme issues. Overall though, great value and good fun over its eighty four levels.