While Bishoujo Battle Cyber Panic can’t really be accused of being original, this single screen arcade dodge ’em up was a game that we were keen to review.  Sure, it’s another cheap and cheerful title from Eastasiasoft and is heavily anime flavoured (sorry, I just don’t get it) but it borrows heavily from an old arcade title called Qix.  Now that name might not mean a whole lot to anybody under, say, thirty but if you got involved with mobile gaming back in its early days, there’s a good chance you played something like this.

The basic concept of this game (and, as we said, Qix) is that you start off on the edge of a large rectangular play area.  In the middle are enemies that can bounce aimlessly or, later, head towards you and you’ve got to avoid them while you head into open space.  There you’ll draw a line as you attempt to divide the space.  Make it back to the edge and the game will fill in the smaller area of the two that you create as you bisect the area.  Then you’ll aim to do the same to remaining, unfilled area.  And again and again until you’ve filled 75% of the area.  At that point you’ll move on to the next level and will do it all again. 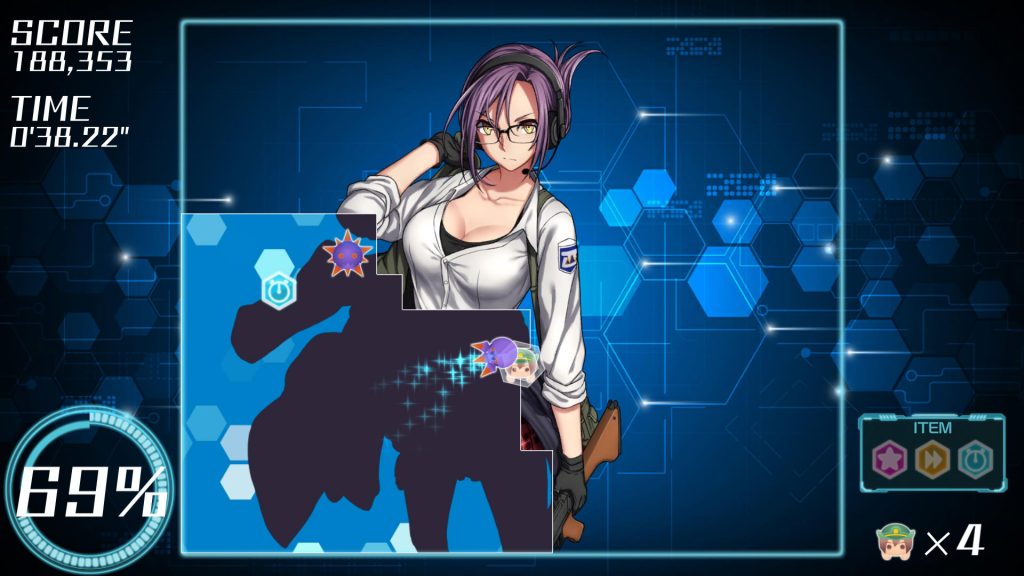 The idea of Qix has always been about risk and reward.  You could get your 75% by chipping away, taking a percent or two here and there until you’ve cleared the area.  It’ll take a while and you’ll earn a peasant’s score but you’ll make progress.  But really what you want to do is get those bigger chunks.  So while you’d want to divide the space in two and take 49% or so percent all at once, which is where the big scores will come, you’ll be vulnerable while you are out there and if an enemy collides with the line you are drawing, you’ll lose a life.

However, clear big areas and you’ll earn the big points and any enemies in the area that you fill in will be destroyed, making life a bit easier and earning you even more points.  The game works out your level score based on those points and time taken and so you are incentivised to be bold about your moves. 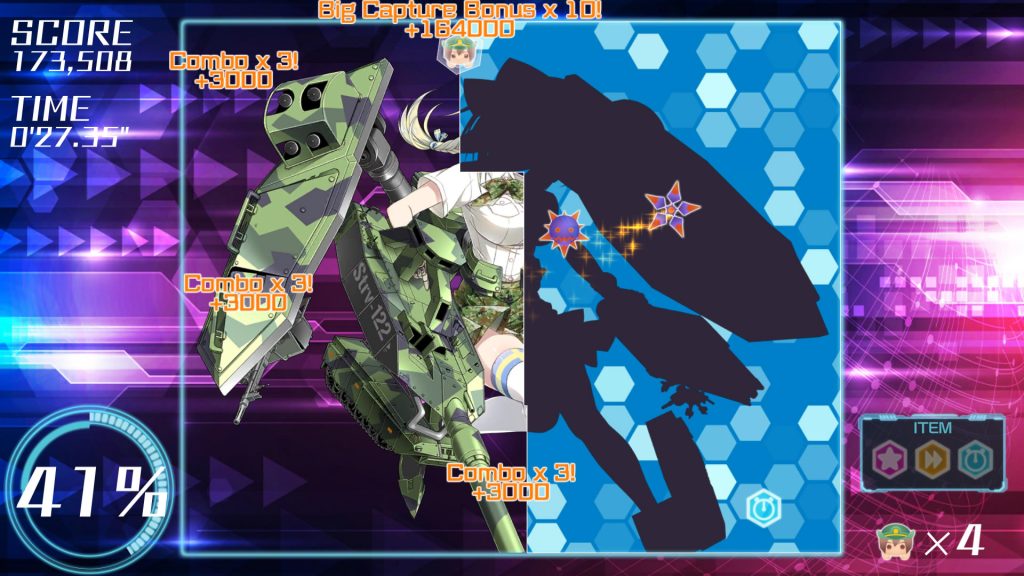 To help you the game will throw in the occasional power-up.  Capture the area it sits in and you’ll earn a temporary boost.  This can be a speed increase, a shield or an immediate freeze of all enemies.  These are temporary but can definitely help you to steal those big areas.

Across the game’s fifty levels, the game will slowly increase the challenge.  The early levels just throw in a few bouncing enemies but by the end you’ll have up to twelve of them to worry about including homing ones, some that track the outer edge until they hit you and even turrets that will shoot at you.  The increase in challenge is welcome at first (especially for an Eastasiasoft game as they can be quite easy) but after a while it is almost impossible to be bold as there are just too many enemies out there.  As soon as you move, you’ll see partially-homing shapes bouncing around your position, causing you nothing but anxiety. 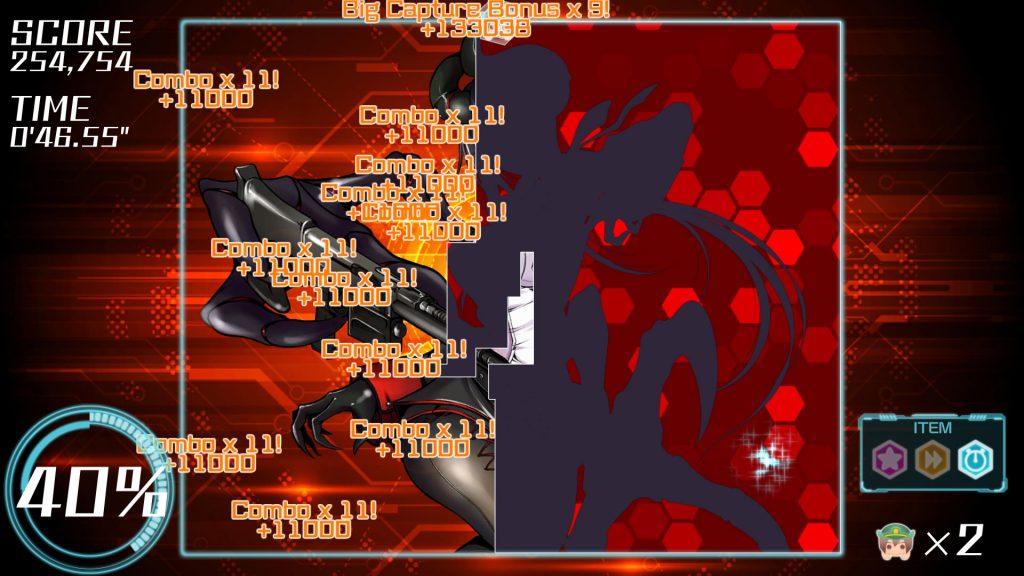 The trick to these later levels is to find a power-up and exploit it.  This works well when they spawn near the edge but if they don’t you can be waiting quite a while to find a useful one.  At this stage in Bishoujo, things get a bit too taxing making risk inadvisable and making defensive play the only way forward.  It’s okay but less fun than those early levels where you were making bold moves and testing your nerve.

But overall the game plays well and offers players a good couple of hours of old-school fun.  There’s no other modes though and so when you’ve cleared the game’s fifty stages, you’ll be done unless you want to go back and earn a star on each level (this is a score based thing but there aren’t any real incentives to do this in terms of trophies or anything like that). 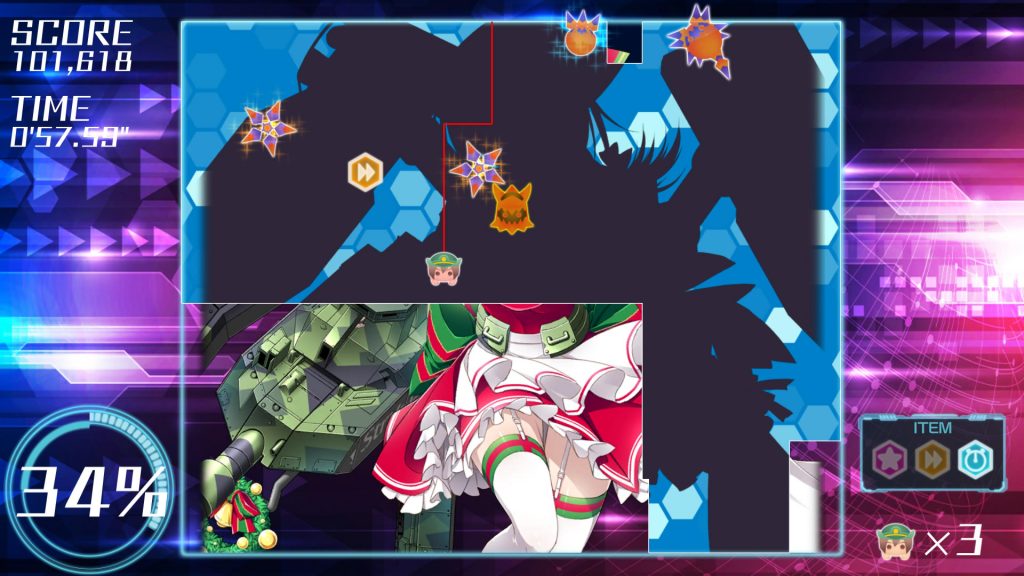 The game has some pretty sharp and bold presentation.  Qix clones have always done this thing where the area you fill in ends up being a picture and that’s the case here.  All fifty pictures are of anime girls with guns.  I guess that’s got something to do with the other games in the Bishoujo Battle series.  The art is all well done but you probably have to be a fan of that sort of thing to enjoy it (especially as the images are a bit weird to be honest.  You know, the usual anime thing of busty girls who look like they are still in school).  The game also has some impressively intense EDM music in there too which helps to infuse the game with a bit of an image.

If you’re a fan of this type of game, then this is a pretty good example of it.  We have niggles about the gameplay in the latter stages and it is all a bit samey but we enjoyed it, even if we did clear it in an afternoon.

Bishoujo Battle Cyber Panic
7 Overall
Pros
+ We like Qix and this is basically Qix
+ Clean, bold presentation
+ Gets quite challenging
+ Cheap
+ Simple controls
Cons
- Just fifty levels, you'll be done in a couple of hours
- A bit samey
- Anime art style might not appeal to some
Summary
Bishoujo Battle Cyber Panic is basically a Qix clone but that's fine with us. It's pretty short but packs in a reasonable challenge and plays well, even if maybe at the end there is less scope for tactics and big scoring.