You probably know this by now but I’m a sucker for hardcore race sims. There’s something about the act of driving that I want to pursue. Unfortunately, life as a cowardly pedestrian has left me resigned to playing at being a boy racer virtually. More often than not, the good sims live on the PC. I own Assetto Corsa on PC but my PC runs hotter than Mars when I play it. Thankfully, more of these titles creep their way into console disc drives. Assetto Corsa Competizione is the latest to line up on the grid. 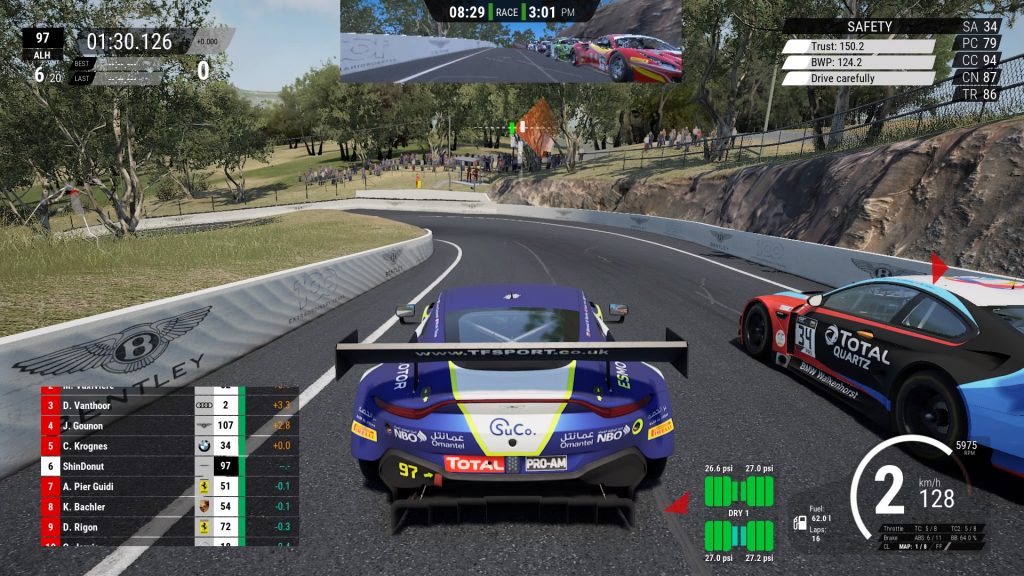 Comparisons with the PC version are inevitable and nowhere is it more noticeable than in performance. Framerate is locked at a steady 30 frames per second. Fidelity is good, although there’s definitely some noticeable pop-in when you roll down the pits. Out on track, things look a lot more consistent. It might not appear as slick as it can on PC, but it still looks impressive.   I feel it’s more optimised than Assetto Corsa as the load times are significantly reduced.  You can get into a race far, far quicker.

There’s a great attention to detail throughout. The official game of the GT World Challenge, Kunos Simulazioni have carried on their great work in the simracing sphere. The product here is a lot tighter, more focused and the license allows them to become a master of one trade. Tracks and cars are well crafted. Visually, they look outstanding and they physically behave in a manner you expect. Porsche’s are always fun to drive with their heavily weighted rear and you get that feeling here.   Tracks are nicely detailed with plenty of marbles off the racing line. Dusty bowls like the Hungaroring are predictably slippery.

Night time racing has a pitch black terror to it whilst rain and changeable conditions add more variables to the mix. Cosmetically, it all looks sound and watching the sun set and cast long shadows of the track is gorgeous. They all add to the challenge as visibility and grip changes during the course of a race. A drying track happens organically and it really makes you consider no two laps are the same. 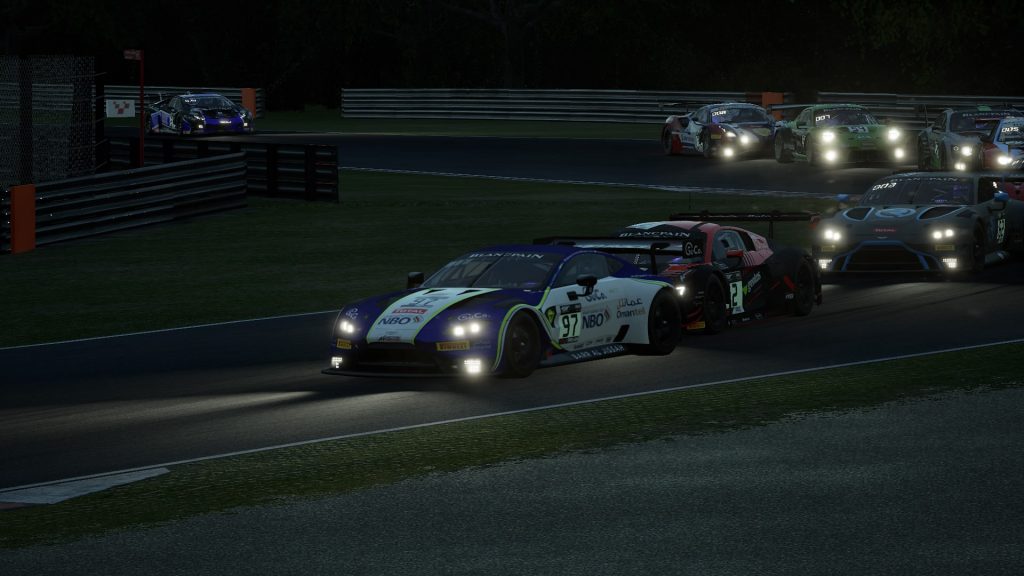 Sound plays a big part with engines sounding wonderfully thunderous. They sound more layered than I tend to hear in other racing games. You can hear tyres slide across the surface, the car bottoming out and none of it feels just for show. Hearing when a slide might be happening, correcting it, is all part of the package.

Driving becomes a lesson in consistency. Assetto Corsa Competizione does boast some eSport aspirations and the career mode does attempt to cultivate capable, sensible players. A complex rating system is always working under the hood. You’re graded on aspects like track knowledge, pace, race craft and safety. Some of the testing events try to help you boost them but there’s also tips on offer to allow you to improve.

It does tend to slide into the background and there are definitely times when more guidance would be helpful. As it’s replicating a real world series, there’s rules and regulations that passed me by. I’ve looked daft coming in for a pitstop only for to find out it didn’t fulfil the requirements for a mandatory pitstop. It’s explained in the UI but, especially in the career, you can hop from event to event and see different requirements. Longer endurance events give you more freedom over pit strategy and stints. I would like more event information in career events before I find them out during the race. In moments like that, it’s not as inviting as it could be.

Racing and self-improvement feels rewarding and it’s helped in no small part by the feedback you’re given as you drive. Your lap deltas invite you to chase more green times, your spotter warns you of incoming danger and you can see exactly where the opposition is in relation to you. It does look busy but it’s all helpful information. Your race engineer informs you of race control decisions, tells you of upcoming pitstops and any incidents around the track. 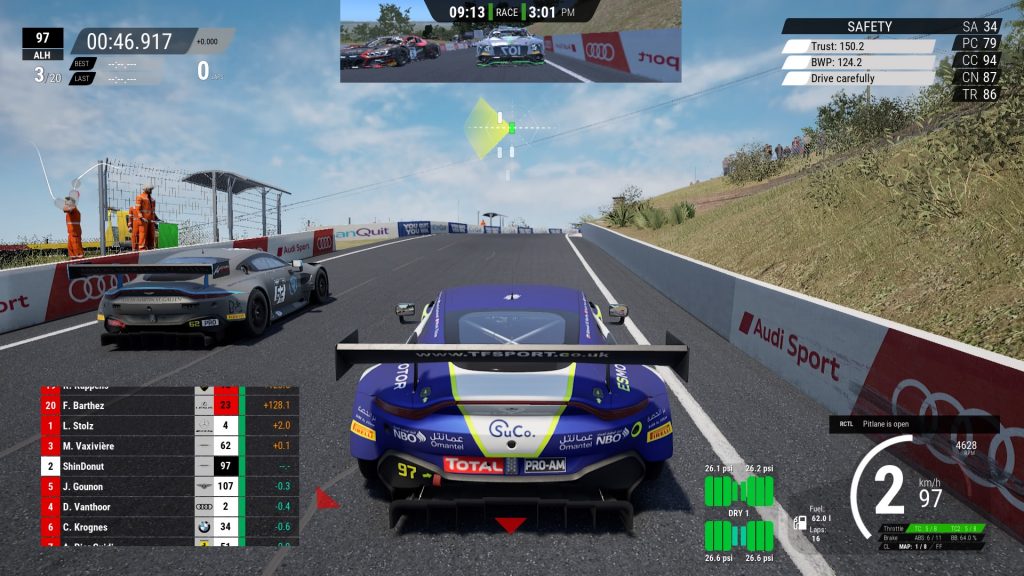 The opposition are largely sensible and competitive. On the default settings, they show aggression on the start, challenging you before the flag drops but they quickly settle into a more strategic mindset. Even in the shorter races, they look to line up a safe pass. They retain a mentality of self-preservation although you can tweak aggressiveness and skill separately.

The other single player modes feel fairly standard. The career isn’t lengthy or especially varied but does show you the ropes. You can partake in a championship season, practice and some single races. There’s also special events which enable you to get your pace rating up. These offer a good exercise in track knowledge and consistency whilst ensuring some internet bragging rights. Events can be tweaked to your liking so you can practice more specific scenarios. 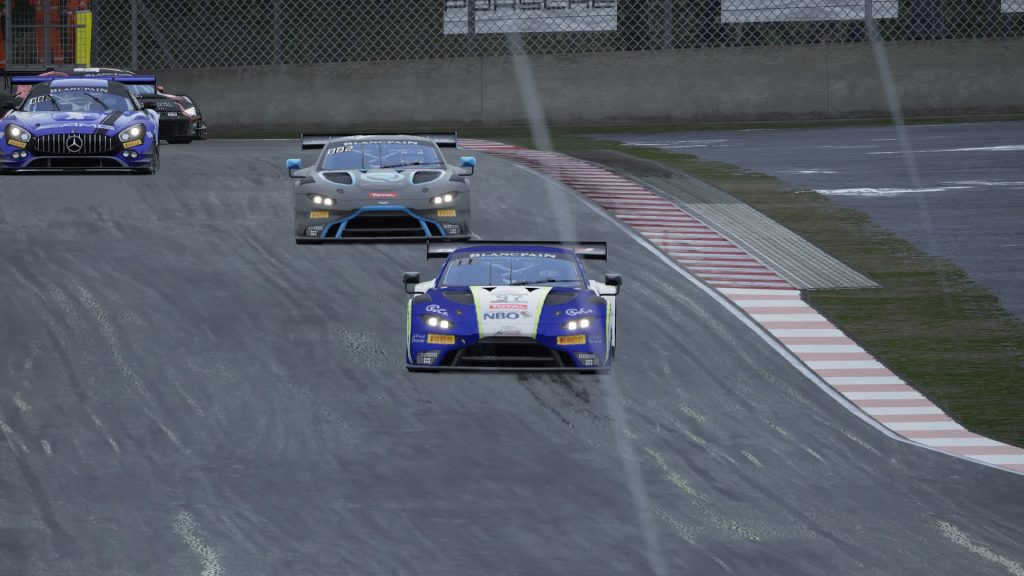 Multiplayer currently lacks a way to create any private lobbies so you’re stuck with public servers and quick play for the moment. It’s been tricky to find a game quickly with races usually in progress. It looks fairly active so it could be I’m locked out by rating. You do have the options to filter out tracks and servers with smaller player counts so you can cater your online experience a fair amount.

Kunos Simulazioni have managed to bring their accomplished racer to consoles without too much compromise. That in itself is a great achievement but the driving remains tight and fulfilling. I’m enjoying the chase of self-improvement, the strategy of competition and how so much of the presentation is in service of letting you know what the car is doing.

Assetto Corsa Competizione
8 Overall
Pros
+ Phenomenal, rewarding driving physics.
+ Great audio and visual work that really helps you find the car's limits.
+ Plenty of feedback on hand to assist you in your racing.
+ Incredibly customisable.
Cons
- Whilst the license gives the game focus, it means you're restricted to GT3 cars.
- There is a visual downgrade when compared to the PC.
- As of yet, no private lobbies are available online.
- There's a lot to take in for newcomers.
Summary
Assetto Corsa Competizione gets so much right. The spectacular physics have made their way to console untouched and the license allows them to focus brilliantly on so much. The sights and sounds feel in service of giving you knowledge and the feedback is all on hand to make you a better racer. It's not exactly accessible but it is rewarding and addictive.