Whist I may still be a relative newcomer to the Ys franchise each game I play impresses me immensely as does Falcom’s output as a whole. I’ve played Ys Origins and Ys VIII: Lacrimosa of DANA and now the trend continues with Ys IX: Monstrum Nox. 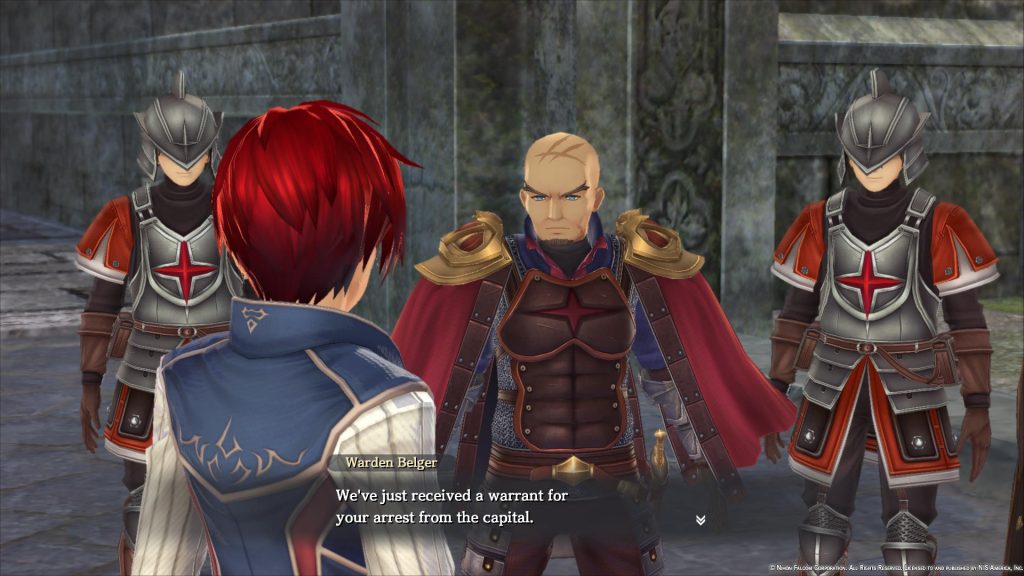 Again you play as Adol, though the story doesn’t require you to have played any of the previous games to enjoy it. He arrives at the gates of Balduq with his friend Dogi for a simple visit. Balduq is famous for its massive prison and unfortunately upon arrival Adol gets to see it up close and personal as he’s instantly arrested for reasons unknown. It doesn’t take long for his adventurer skills to get him out however, but as he’s escaping he is cursed by a mysterious woman.

This curse turns him into a Monstrum, which gives him special powers but also allows him to see Lemures, monsters in another plane of existence, and restricts his movement within the city as barriers block his path. He now has no choice but to stay within the city and investigate in order to free himself, and the five others who are also afflicted, of the curse.

Ys IX is an action RPG and you’ll quickly fall into a rhythm of what the game expects of you. You establish a base of operations early on where you can chat with your colleagues and accept side quests and from there you can explore the open parts of the city. Thanks to your Monstrum powers exploring the city includes the rooftops as well as ground level, giving Balduq a mini open world feel with chests littered about, graffiti to find and glowing petals. 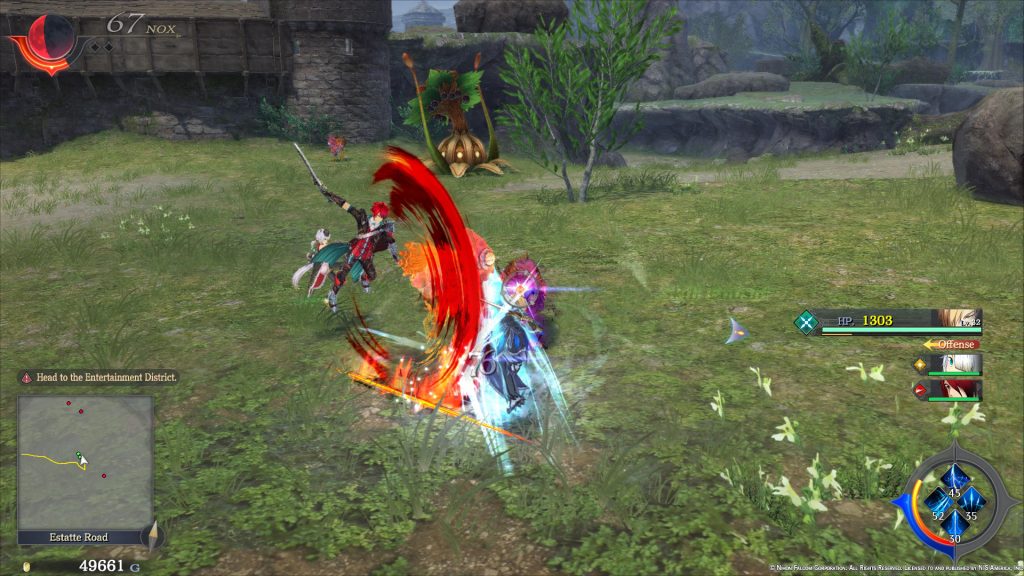 Running around the city feels good. Initially you can only warp to certain points but as you invite new characters into your party you unlock new abilities like being able to run up walls, glide and a detective vision as well as others. It’s not the smoothest experience at times with running up walls being particularly finicky but it does the job.

The main reason to explore the city is the complete your quests. You have main and side quests and each are marked clearly on the map, along with how many collectibles there are handily. Side quests tend to be pretty straight forward, with you simply going to the marker and talking to people or defeating monsters but you are well rewarded. You will need to do side quests in order to progress the main story sometimes anyway. Main missions are often hidden behind areas you can’t yet access but you can remove the barrier by entering a survival arena and completing it.

You’ll need over one hundred Nox to open the portal first though, which you can gain through the side quests and by taking part in optional random battles around the city. You can craft upgrades to aid you in the survival areas, like decoys and towers but they’re effectively just big fights. Once you do get access to the main mission it’ll generally lead to a new character for your squad and the prison for you to explore a little more. 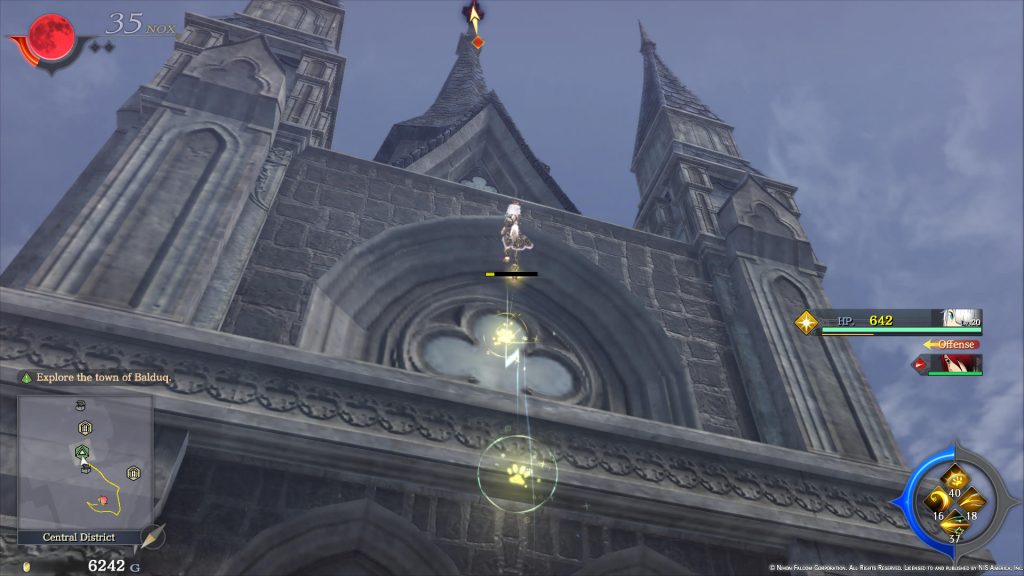 This does prove to be a little problematic though, as the environments tend to become very samey. You get some green areas and caves but otherwise it’s prison walls or underground passages. Similarly a large portion of the game follows the same pattern of do some side quests, unlock more of the city, unlock a new character and head into the prison. It does start to feel a bit repetitive.

Luckily the Ys titles have fun, fast paced combat and this one is no different. You have a regular attack but when you press the

button each face button becomes a special attack which uses SP. This recharges pretty quickly however so you’re rarely left just hitting regular attacks for long. A well timed dodge or block gives you a boost to SP as well as slowing time so you’re rewarded for not simply button mashing as well. You’ll also build up a boost meter as you fight which allows you to become supercharged for a time if the bar is at least half full, unleashing a powerful attack with the remainder of the bar if you choose. 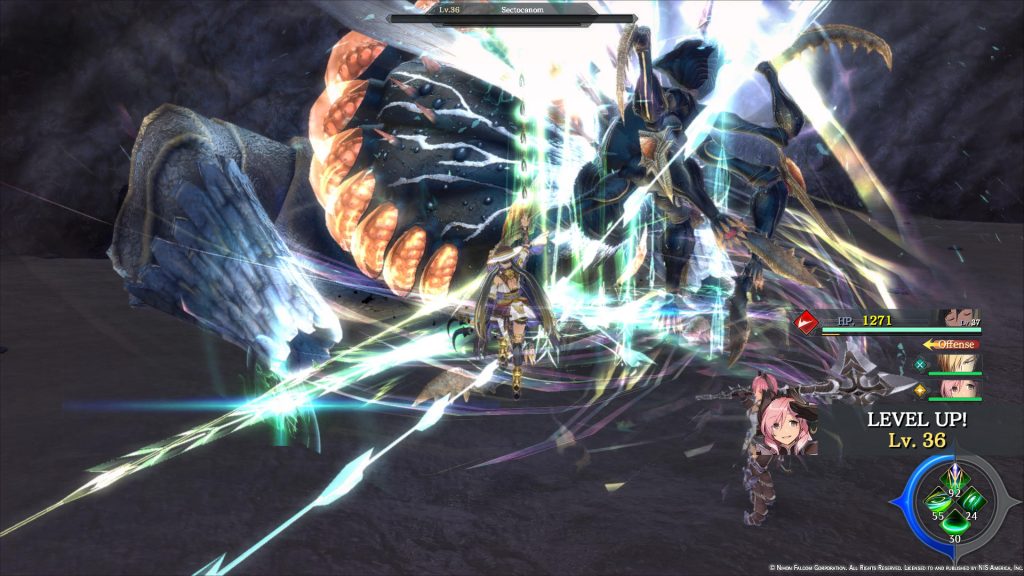 The regular enemies you’ll encounter through the dungeons won’t cause too many problems, especially if you pay close attention to their weaknesses. Each character has an attack type: slash, strike or pierce, which enemies are weak to so switching between the three characters you have in your party on the fly to take advantage of this is beneficial. Bosses tend to be a little tougher and paying attention to their attack patterns and good use of your boost is important, but still not too challenging on Normal difficulty if you’re suitably levelled with decent gear.

Visually there hasn’t been much improvement since the last game which is a shame as there is no Vita port holding this one back, but it is also on Switch. The slightly better than PS2 visuals are starting to show their age however, especially with the PS5 now out. The visuals are well designed but the environments are quite flat and everything could just do with using some more up to date graphical effects. The camera can also prove to be a problem when in tight corridors. The music is top notch in a classic JRPG fashion as always. 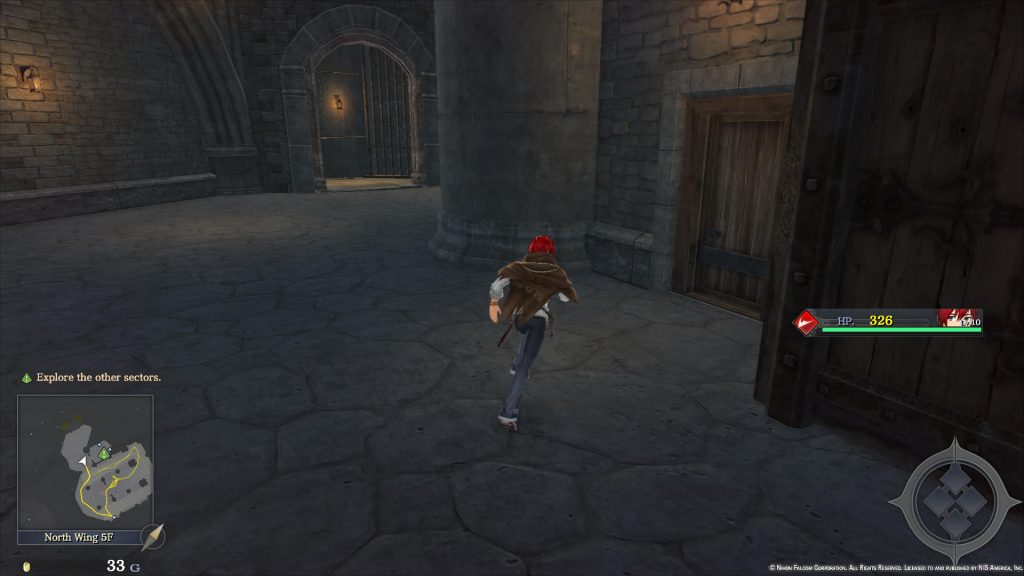 Despite the fact I personally found the island in Ys VIII slightly more interesting to explore, with new characters and equipment allowing you to get to previously inaccessible areas, I still found Ys IX incredibly enjoyable. The reliance on the survival battles and the overly familiar environments is inherently less interesting, though the increased movement abilities and verticality is very welcome. Ys IX: Monstrum Nox is still a lot of fun to simply play which counts for a lot when other games seem to be designed to just waste the player’s time these days.

Ys IX: Monstrum Nox
8 Overall
Pros
+ Combat is still a lot of fun
+ Movement abilities are great
+ Map is incredibly useful
Cons
- Gameplay loop is repetitive
- Environments are a bit too samey
- Visuals are looking dated
Summary
Ys IX: Monstrum Nox is another great addition to the Ys series of JRPGs. The gameplay loop does settle in very quickly with some repetitive environments but the combat is superb as always and the new travesal abilities are a lot of fun to use.