After it looking like the Yakuza series was dead in the West for a while we now have two releases in the same year, with another due early next as we play catch up. Yakuza 0, a prequel to the original title released on the PS2 came out back in January and this, Yakuza Kiwami is a remake of that PS2 original. 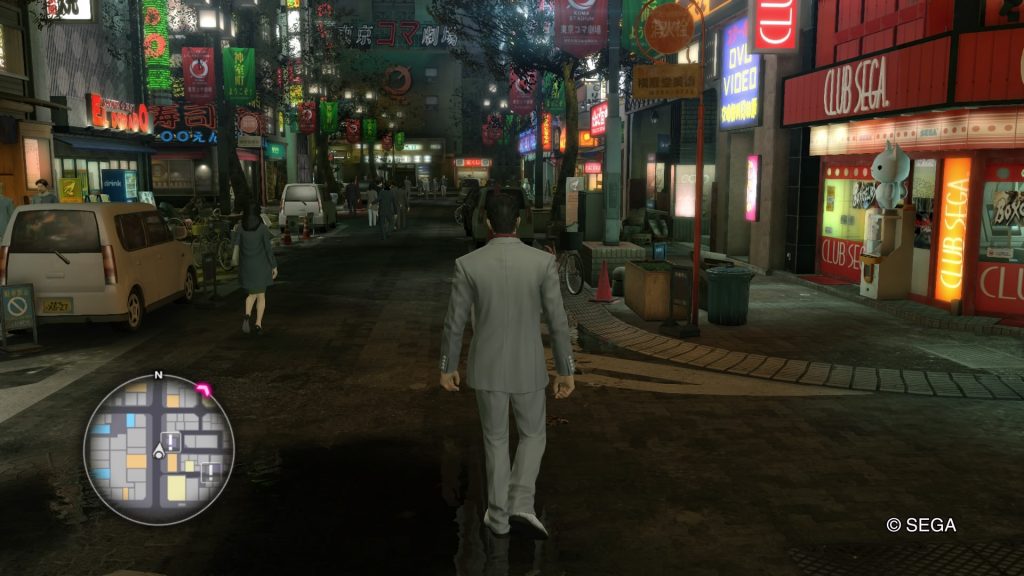 If you played it back in the day then things will be very familiar. The story is the same, the cutscenes are pretty much shot for shot. Certain areas are more fleshed out from what I remember but the main plot points are the same. That means you play as Kazuma Kiryu and only Kazuma Kiryu unlike in the more recent titles. The story starts with you, an up and coming, well respected Yakuza, taking the blame for something you didn’t do. This lands you in jail and on the wrong side of the Yakuza families. These early scenes, although playable, are quickly pushed through and the story begins proper as Kiryu leaves prison ten years later.

The main thread is a serious crime thriller, as Kiryu continues to live the only life he’s known after leaving prison but with almost everyone out to get him. Thankfully though there are many, many substories which you encounter as you explore the city and these can be incredibly silly and light hearted. Better than that, these are both new and old, some players may recognise and others that are brand new for this release.

For those who haven’t played any, the Yakuza titles are open world games. Not in the Grand Theft Auto, Saints Row, drive around a massive city style, but on a smaller scale. You have a district, Kamurocho, to explore, your main story missions are marked clearly with waypoints, but you’re free to run around as you please. You can go into shops, go to the batting cages, go to a bar and play some billiards or darts and plenty more. As you walk around you’ll encounter the substories I mentioned earlier, find locker keys and playing cards just lying on the ground and be ambushed by random encounters. 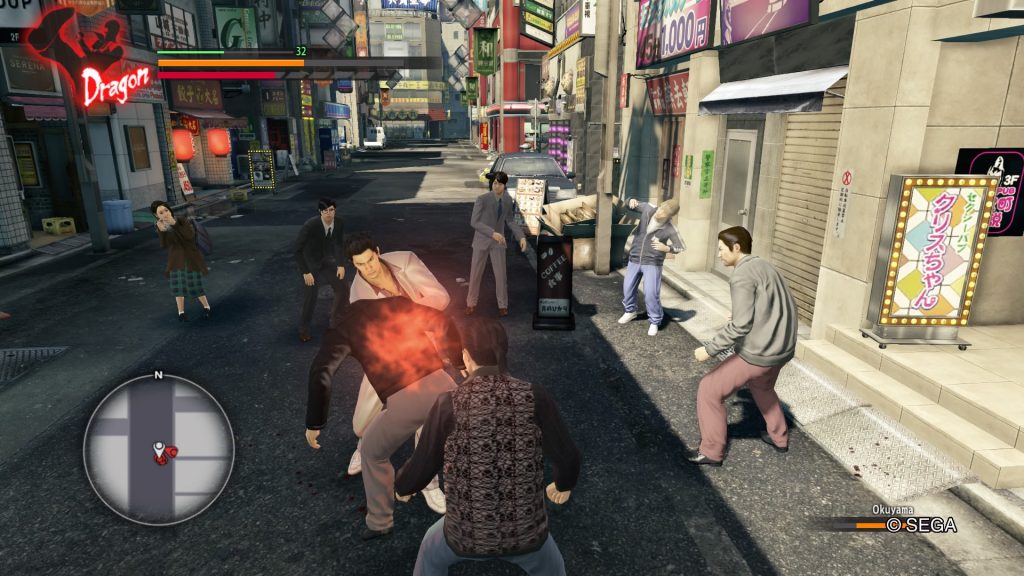 Kamurocho, it seems, is the most dangerous place in the world. Walk down any street and you’ll be accosted by Yakuza, street thugs and gang members at almost every turn. They give you a decent warning, announcing that they’ve seen you, but sometimes they’ll be unavoidable. Once you’ve made contact you’re, quite seamlessly, taken into a small battle arena surrounded by spectators and you are in a fight. Combinations of light and heavy attacks will take down foes gradually and a throw will solve the problem of a blocking enemy. Objects litter the streets which you can use as weapons.

Hammering on an enemy will fill Kiryu’s Heat meter, once full this allows for a spectacular, powerful move which is both incredibly useful to use and satisfying. The camera changes to emphasise the hits which can be as simple as a headbutt, or as involved as slamming someone’s head in a car door or punching someone into the air and keeping them up there with a combination of punches. This was always true, but Yakuza Kiwami has added some modern wrinkles in Kiryu’s multiple fighting styles. 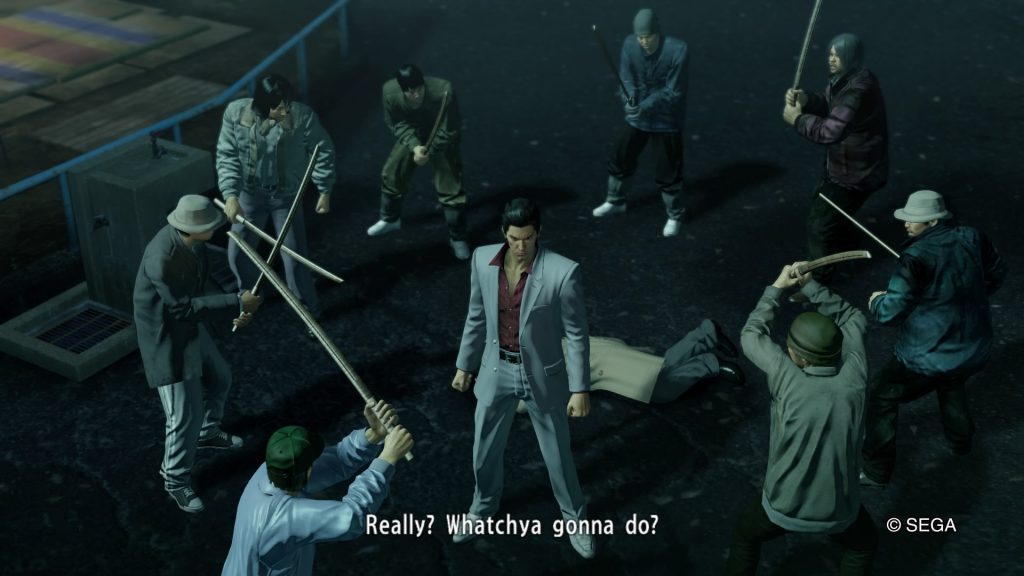 Tapping the dpad in each direction will change Kiryu’s fighting style from Brawler, to Rush, to Beast, to Dragon. Each has it’s own strengths and can be levelled up individually through a complex skill tree to suit your own play style. Brawler is the default and allows for a range of moves as well as weapon use, Rush is incredibly fast allowing for quick attacks and dashes to get in and out, Beast is the opposite, very slow but allows you to absorb damage whilst dishing out your own. Dragon is the odd one out in that you level that up through side quests rather than spending experience points but has plenty of unique skills to make up for it.

These are the three elements of Yakuza‘s gameplay. There are the story sequences which are well acted (Japanese only however) and directed, the fights which punctuate everything and are enjoyably violent and then there is the side stuff which can involve a wide range of activities. If you don’t enjoy the fighting then you may well struggle to find much enjoyment but I personally like it a lot and the game’s ability to go from a serious crime drama to silly within moments is a reminder that weird Japanese-ness can be a very good thing.

They’ve taken a PS2 game and done a very good job of updating it for the current generation of consoles. This was also released on the PS3 in Japan and so the visuals aren’t quite as good as they could have been had they been made solely for the PS4 with anyone but the main characters looking a little undercooked but this can still look fantastic at times. Slight issues with the camera controls are a pain but everything else has been brought in line with the modern instalments and for a cheaper than average price too. 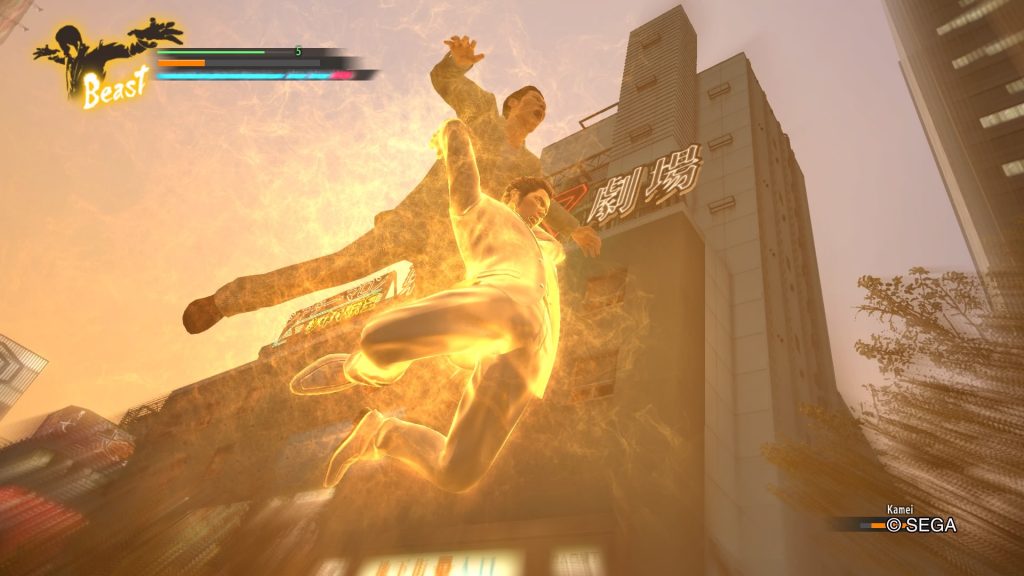 It’s difficult to fault Yakuza Kiwami too much. Unlike the recent Final Fantasy XII remaster you’d find it difficult to identify this as a PS2 game, it was a fun game back then and with the improvements it’s even better now. The characters are deep and likeable and the story is entertaining when you aren’t being distracted by the substories and mingames, which you will be. There is lots of content, although not quite as much as fans may be used to, and is a great addition to the series. If you’ve never played a Yakuza game before then you can’t go wrong with either this or Yakuza 0 and here’s hoping Yakuza 2 gets the same treatment.

Yakuza Kiwami
9 Overall
Pros
+ A great remaster of the PS2 classic
+ So much to do
+ Charmingly Japanese
Cons
- Slight camera issues
- The pacing of the story may irritate some
Summary
Calling Yakuza Kiwami a remaster almost feels unfair. You'd be hard-pressed to recognise it as a PS2 game originally, with the graphical improvements and gameplay additions bringing it on par with the other recent entries in the series. As fans would have come to expect its an intriguing story, with deep, likeable characters, brutal combat and plenty of side stuff to keep you busy.