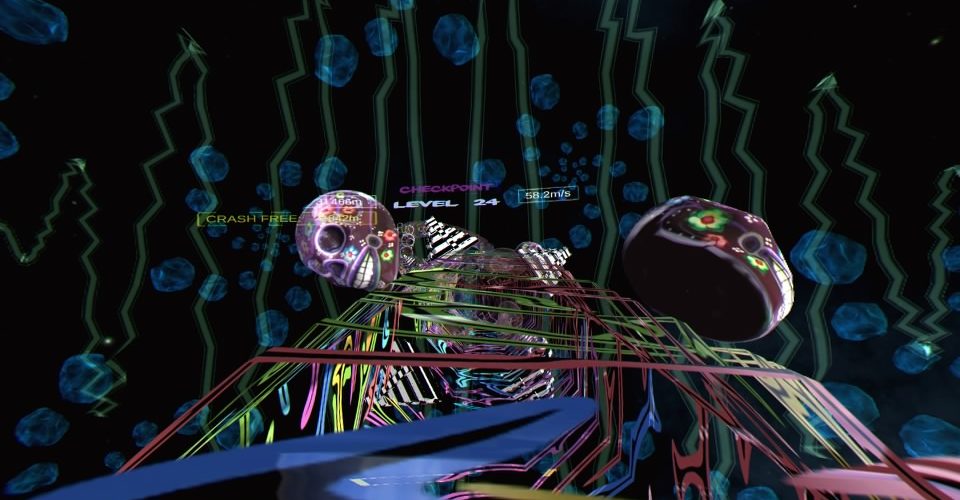 TruckerVR’s Verti-go Home (styled as VERTI-GO HOME! but we’re not doing that today) is a PSVR-only endless runner. Well, it might not be endless. The trophy set needs you to get to level 50 and this reviewer’s skillset has gotten us halfway to there before leaving us whimpering on the floor with our eyes dribbling onto the carpet.

Verti-go Home is a first person title where you constantly move forward through twisting levels where you are either in a pipeline rotating around it or you’re on the outside doing the same thing. Think Geoff Minter’s Polybius for an example of the same sort of idea but this game has no shooting in it.  In fact, Verti-go Home doesn’t have any DualShock or Move controls at all. Instead everything, bar restarting, is handled by head movement. If you want to rotate, you lean your head to that side. Clockwise and anti-clockwise movement is all you’ve got. No speed control, no jumping, no shooting, no smartbombs. Just rotational controls.  The closest thing to it is probably is Hex Tunnel, a terrible, forgettable PSVR game that we reviewed last year. 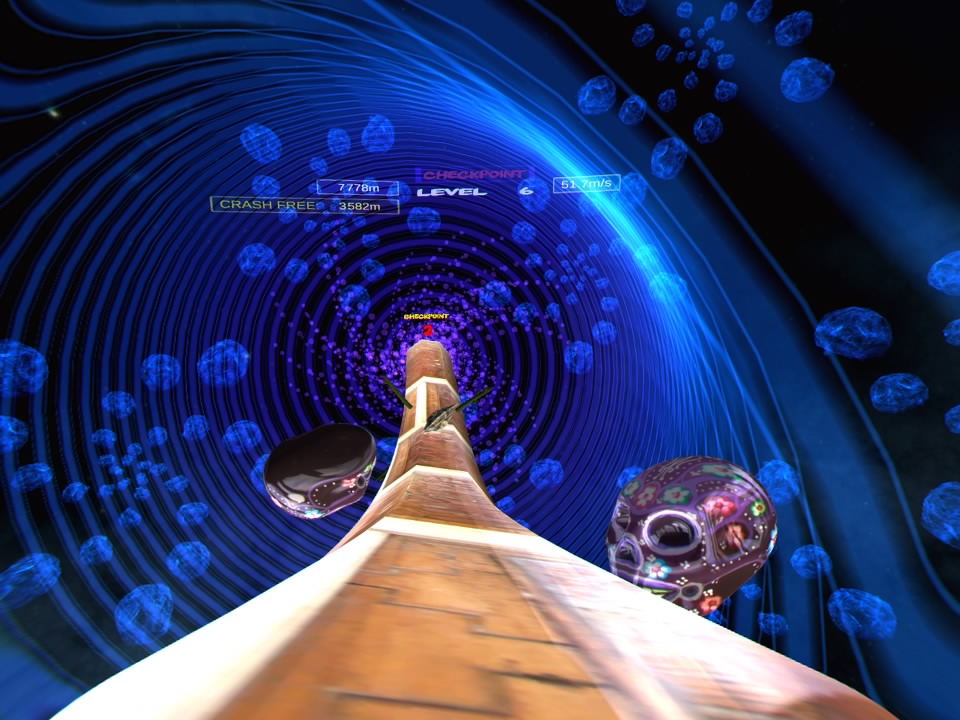 Along your route you’ll have to avoid numerous obstacles, usually with a Mexican ‘Day of the Dead’ theme but often just random objects. We thought that dancing skeletons were odd but avoiding wooden palettes was definitely super obscure. Some obstacles are static while others move either side to side, up and down or in circular arcs and while the levels are randomly generated each one will have set obstacle types in it so you’ll soon learn to anticipate how they move.

Those are the basics right there and we’re barely into the review and that might be an issue for some with this game. It really is just an avoid ’em up and nothing else. There’s a little bit of detail to add in terms of the way that the game gives you a checkpoint after every third level, so failure isn’t punished too hard. That said, later on in the game the gap between checkpoints can feel a little punishing. Especially levels 19-21 which gave us fits thanks to level 19’s tunnel being essentially invisible, making the movement of its obstacles harder to read. 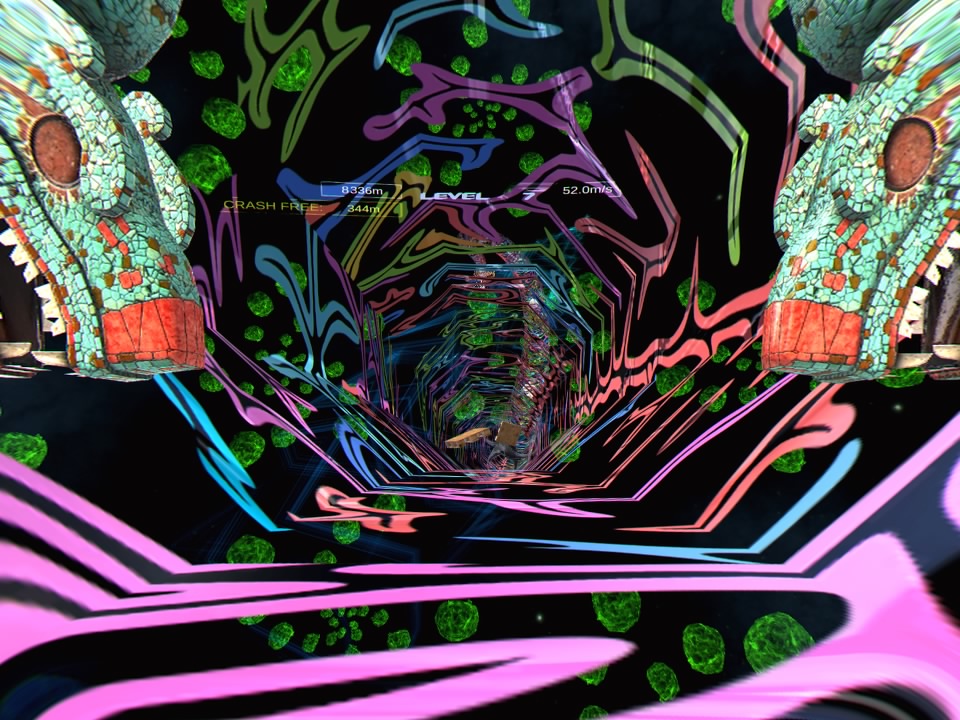 That’s not the only way that the game can occasionally disadvantage you, visually speaking. Sure, it’s a pretty mad looking game in terms of the obstacles it puts in front of you, but only in a kind of surreal sort of a way but occasionally the twists and turns of the tracks can obscure your view of what’s coming up. Also, you’re not always facing directly forward and so you’re having to make relative adjustments too. It could be a problem but somehow it usually isn’t. Normally any collisions are the player’s fault which, of course, increases that ‘just one more go’ factor considerably but every once in a while it can feel like you’ve been cheated.  Thankfully, you can restart the action pretty quickly.

One curious decision that they’ve made is to reset your progress when you reload the game. So every time you load up, you’re back to level 1. This is odd for a couple of reasons. Firstly, it’s pretty inconvenient and mainly it means you have to stay in the VR headset for a long time chipping away at those checkpoints. It could feasibly take an average player a few hours to finally breach level 50 which is too long to spend in VR, let alone with this game’s pace and visuals. 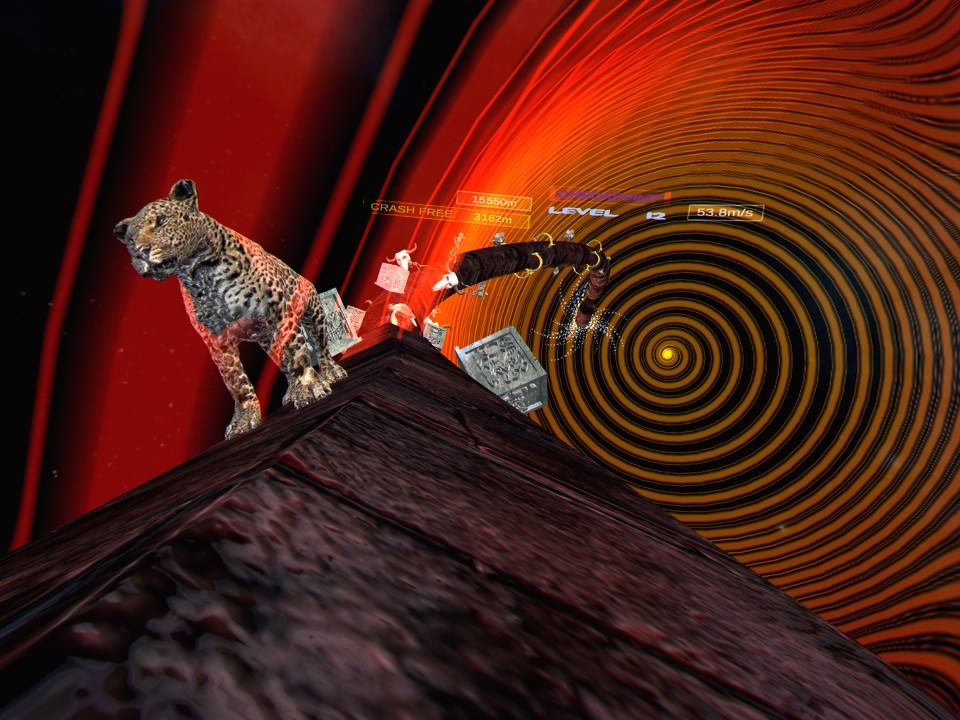 On that subject, this is an intense VR game. If you’ve had issues with motion sickness then this could be troublesome.  It won’t be for everyone but, for us, it’s exactly what we want. There are too many staid PSVR titles out there offering sub-standard visuals and sedate action. Verti-go Home wants to wreck you but if you can keep up with it, this is one of the most exciting-looking games on the system.   The visuals aren’t spectacular in terms of design but everything is big, well-defined, creative and in your face. This is the sort of game that we want to see on PSVR, the kind of thing that you can show to your non-gaming mates and potentially unlock that epilepsy that they previously knew nothing about.

It’s not just the visuals that are big and in your face, the soundtrack matches it and then goes even further. We can’t describe it and do it justice. As you play, the game goes through a fixed set list that isn’t stopped by restarting at checkpoints. It just keeps going but it’s full of huge electronic songs that pull in all sorts of weird sub-genres. It sounds amazing and absolutely adds to the whole package. 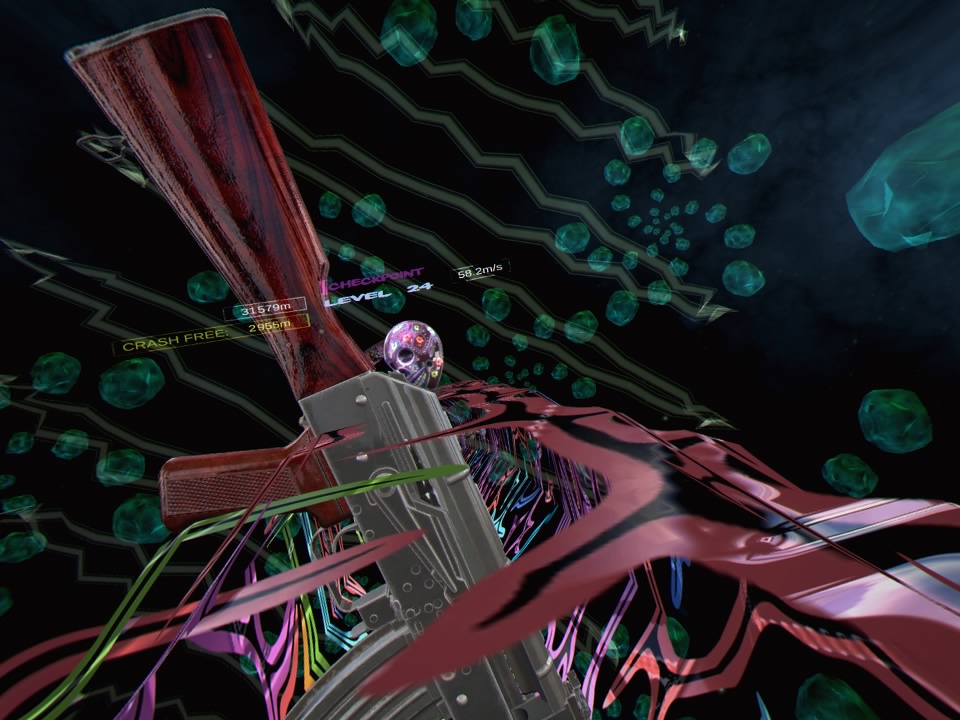 At this point you’re probably thinking that this is a game that offers great presentation but limited gameplay variation and that’s just about right. For a cheap VR indie title, we’re utterly satisfied with it but, sure, there are obvious ways to improve it. An option to use DualShock controls would certainly be more comfortable than using your neck, a level select would be fantastic and we wish the levels were a tiny bit fairer but if you take this game as a VR experience, it offers a big punch for a low price.

So, while that score below is absolutely fair and representative of the game, if our scores were an aggregate of other factors, it would have scored at least a point higher for fun while losing points for longevity and variation. But to criticise those elements is to miss the point of Verti-Go Home. It’s not here to offer you depth, it’s here to melt your retinas. Job done.

Verti-Go Home
7 Overall
Pros
+ It looks good...
+ and sounds great
+ Simple to get started with
+ Big 'VR effect'
+ Highly addictive
Cons
- Occasional unfair deaths
- Lacks variation
- Doesn't save progress
- Trophies might be asking a bit too much
Summary
Verti-Go Home is big, bold and brash and while the exciting presentation may be masking some serious issues around the lack of depth the gameplay has, this is fun, immediate VR title that burns brightly but probably a little briefly too.