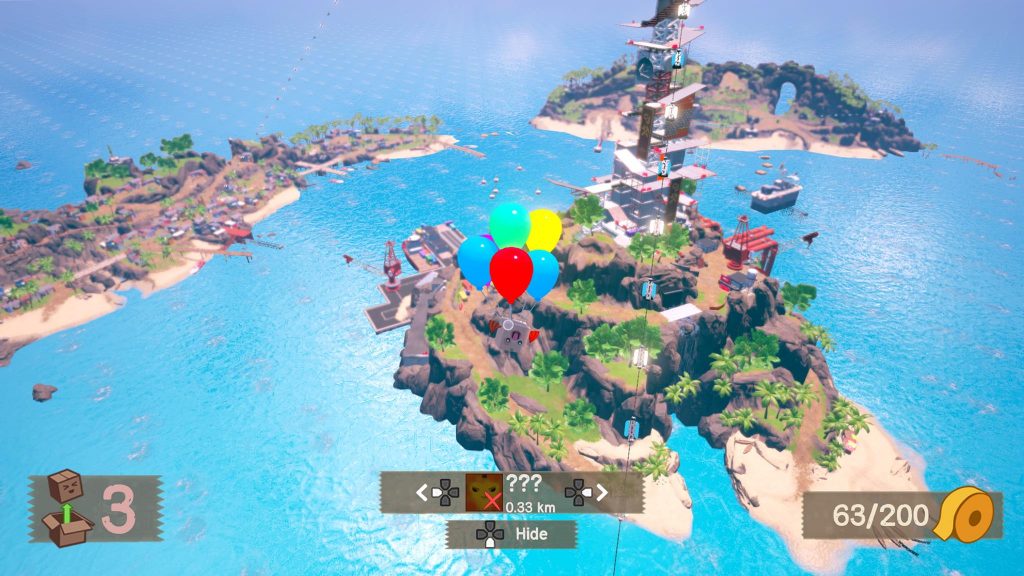 As seen with Yooka-Laylee and Snake Pass earlier this year, the 3D platformer is back. Developers are making the push for the classic games of yore and Unbox: Newbies Adventure is yet another to take a leap into the fold. Much like Yooka-Laylee and Snake Pass, here is another game that tries to take a slice of that N64 nostalgia pie. But unlike the previous games, unfortunately, Unbox doesn’t really deliver an experience that is worth the moniker.

The story centers around an Amazon wet dream, with the newest delivery technology being sentient, self -shipping boxes that have built a society around the Global Postage Service (GPS). As the aptly named ‘Newbie’ It is your job to complete challenges in expansive colourful worlds, while taking on the enemy boxes called the Wild Cards and their leader, Boss Hog. 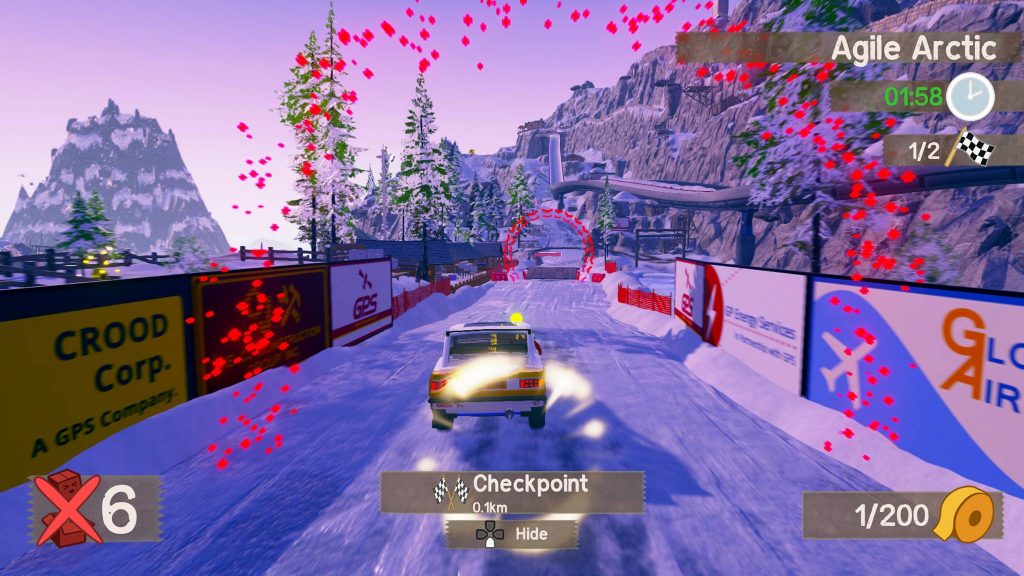 Gameplay should be as you expect, with a colourful character and a wondrous world to explore, this is a run and jump affair. The difference here is that you are a box. Not a box with legs, not a box with hovering super powers. Just a box. With that in mind, your main method of traversal is to drag and roll yourself across the landscape as if you were a marble with corners. You also have a neat jumping ability called ‘unboxing’ which allows you to unbox and fling your inner box into the sky up to six further times. Your main movement is a bit of a problem. Due to the nature of a box acting like a ball, traversal can often be a bit unpredictable. Often, I found Newbie getting stuck on the environment by the corners, or skipping without notice over stones as I prepared to make a well-timed jump. This doesn’t lend itself well to accurate platform play and that is something that immediately makes this game hard to enjoy. It also doesn’t help that Newbie shoots off in the direction you pick within an instant either. It shares a lot of the failings of 3D Sonic games in the Adventure series, where the game is less about momentum or earning speed, but hitting full throttle and being bloody hard to control in the process. You can bet that the camera doesn’t like it either.

The Unboxing jump mechanic is also a bit of a stickler. For a game about traversal and exploring your environment, Unboxing can either make jumping puzzles trivial and often it feels that the only reason the gimmick exists is to act as a failsafe due to the shonky movement as described before. Barring a few obvious long jumps that required unboxing, I never really found any challenges that out rightly required it either. It’s simply a mechanic that is there. 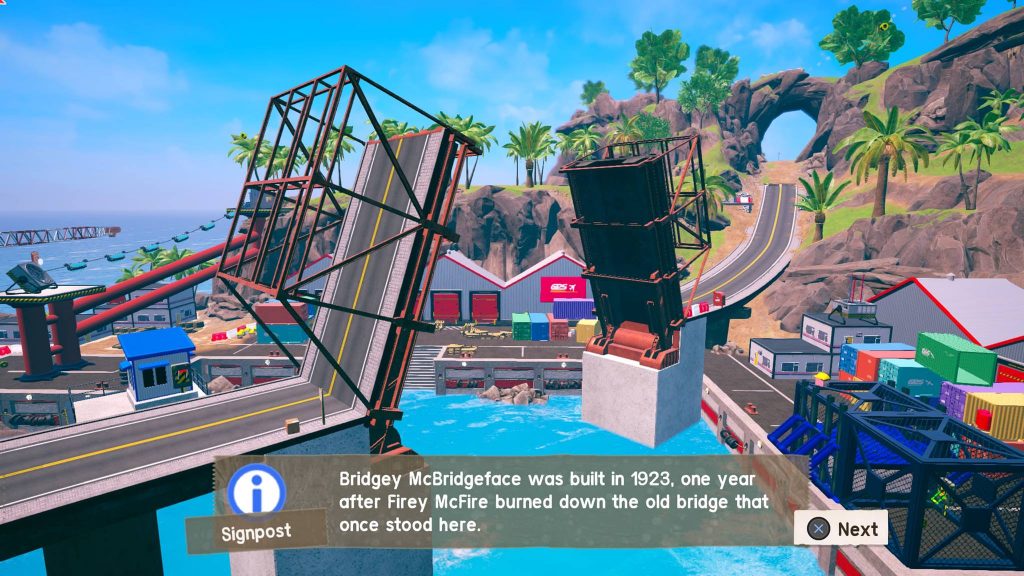 There are some elements of Unbox: Newbies Adventure that are worthy of merit. The team at Prospect Games have done a good job of incorporating various elements of the Unbox world and designing challenges around them. The cast of characters also are worthy of note, while all being carded cuboids that speak like Banjo-Kazooie characters in garbled tones, the dialogue is fairly well written and provides some mirth to break up the gameplay with the odd cheeky reference to other (sorry, better) games. I quite like the racing challenges also, despite the physics and strange movement.

While I can forgive a few things however, there are a couple of elements I cannot. Unfortunately, my time with Unbox was fraught with graphical and physics glitches that not only put a damp on things, but otherwise ground the game to a halt with a crash or two. One such incident saw Newbie being catapulted through the world, something that not even the ‘Reset mission’ option could solve, (in fact it broke the game further!). 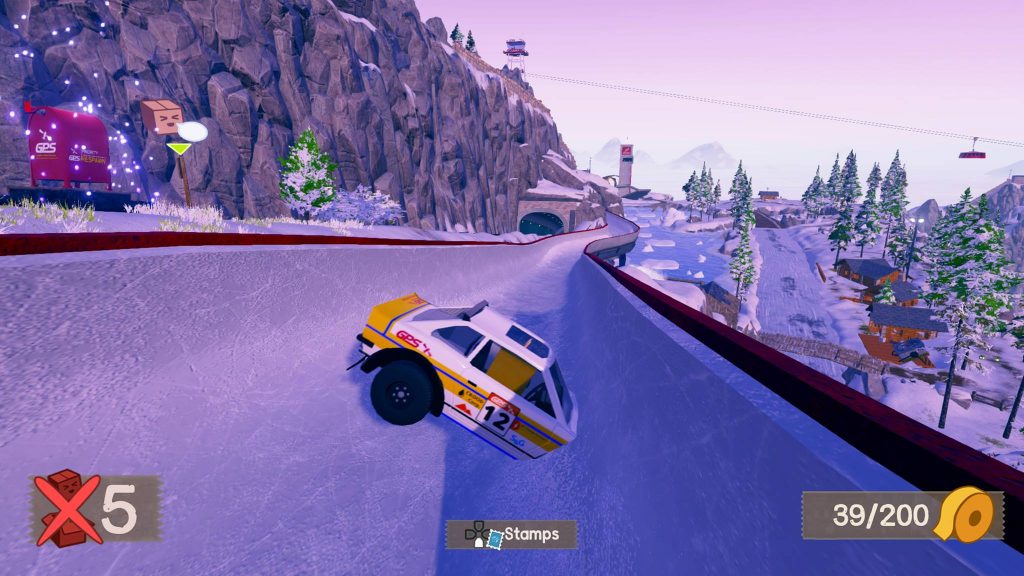 Another big, glaring issue for me is usually something I love about N64 style platformers, the music. Each level is appropriately themed with instrumentation of each world. Paradise Isles has the steel drums, while Parcel Peaks has a snowy bluster, it even tries to adapt to the level as you encounter certain areas or characters. Unfortunately, each soundtrack loop sounds like it is only around five seconds long. This means that by the time I had collected the various stamps, golden tape and other McGuffins along the path I was begging to leave each level as schlock cheerfulness and repetition just kept getting the better of me.

Unfortunately, Unbox: Newbies Adventure is not the one. The above issues, the technical glitches and general movement that permeates through the game betrays any kind of excitement or fun that could be gleaned from this otherwise beautiful looking platformer. That’s not to say that it isn’t without merit or good ideas, but with other platformers coming forward and proving their worth, it is incredibly hard to recommend.

Unbox Newbies Adventure
4 Overall
Pros
+ The worlds are large and very nice to look at, thanks to the implementation of Unreal 4
+ Occasionally fun challenges, including the vehicle racing sections
Cons
- Difficult to get to grips with. Imagine a rolling ball game but you play as a cube
- Repetitive, joyless music that grates on the mind
- Frequent glitches which trigger with little provocation
- Doesn’t feel optimised for the PS4.
- Frustrating combat challenges
Summary
Unbox: Newbies Adventure is a cute and somewhat original concept wrapped in technical issues that make it hard to recommend. While it can be occasionally fun; Unwieldy movement, infuriating combat and glaring graphical foibles make it a less than stellar package.