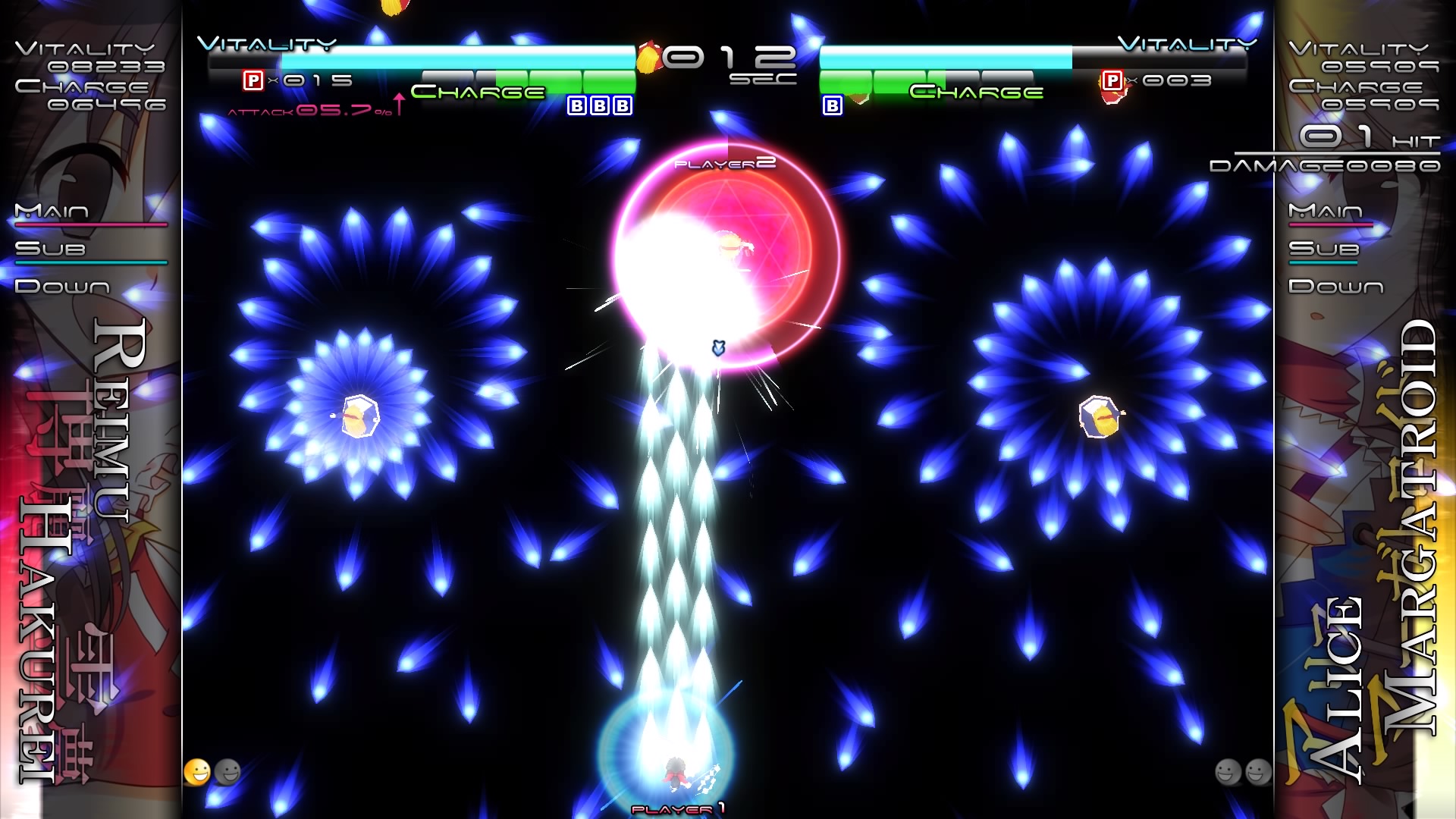 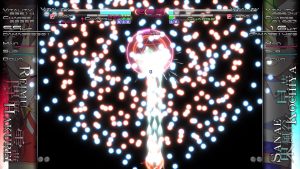 Around eight years ago, a game called Wartech: Senko no Ronde was released in arcades and on the Xbox 360 and offered gamers a very strange mix of genres.  Essentially a bullet hell shoot ’em up but in a very arcadey one-on-one fighting game format, the game had its fans, usually very hardcore types who don’t mind chipping away at energy bars and dancing through massively complex bullet patterns, but to most other people it was a bit of a mess.  If they even tried it at all.  It managed to get a Western release and held its £50 asking price for ages before giving up the ghost and dropping down to around a tenth of the price where it did precisely no business at all.

Touhou Genso Rondo: Bullet Ballet borrows from that format too which means that for the most part the game will feature you and your enemy circling each other while firing bullets at each other, occasionally stepping in to throw in a melee attack or two.  While it has the aesthetics of a one on one fighter with its energy bars and round counters, primarily the action happens at range.

A tutorial aims to explain some of the intricacies of the game but it is lengthy, text-based and features unnecessary banter between the two female characters giving you the information which leads to the whole thing dragging out a tad.  Simplifying it though, your moves are a basic ranged attack, a sub attack and a melee attack.  These come in three flavours – normal and two others based on if you are rushing or moving in ‘slow’ mode – and there are charge attacks which throw out some serious bullet hell.

Most interestingly, you also have a spell attack which shifts the action by having the player using the attack turning into a boss character at the top of the screen, complete with some horrifying bullet patterns, and the poor victim at the bottom. 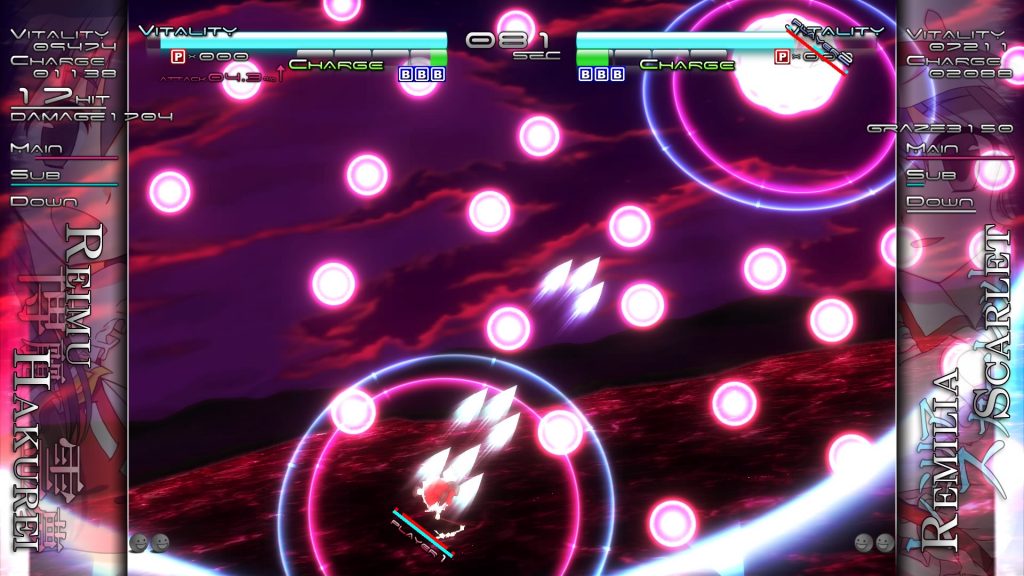 In terms of single player, which ultimately acts as your training for the game’s online versus mode, you have a Story mode – all Japanese girls and baffling stories told in text punctuating rounds of action – as well as an Arcade mode and Boss Rush.  Arcade mode is odd.  Generally the first six bouts are ridiculously easy, in some of them I’ve seen the enemy just take constant damage without offering any offense back at me.  The seventh, final bout however is usually way tougher, pretty much always getting the better of me.  So that’s fun then.  I guess the answer is ‘get good’ but it’s a shame that the game offers no resistance until this point.  A smoother difficulty curve would certainly be smarter and would coach the player a little for that final battle.

Boss Rush has you facing off against a series of enemies in their spell attack variations.   In regular battles, these are what you save your bombs for but in Boss Rush, those bombs are limited which makes this mode very difficult indeed.  Certainly, there are bullet patterns that seem impossible to get through unscathed and in the end it always tends to be a case of just hoping you can get enough damage on them before they kill you.  Unless there’s a trick to all this that the game doesn’t want to tell you about.

The game will have its fans and maybe they will experience the game as the titular bullet ballet it claims to be but, honestly, I’m just not getting that.  Because the game area expands and contracts based on the your proximity to your foe, pulling off the kind of pixel-perfect movement you’d use in a bullet hell shooter is a little bit tricky and the controls feel a little bit sluggish and slippy.  Also, there’s not much of a sense of damage and impact here.  You really are just chipping away at the enemy’s health usually and given that this is indicated in the top of the screen anyway, you don’t really see or feel the damage immediately. 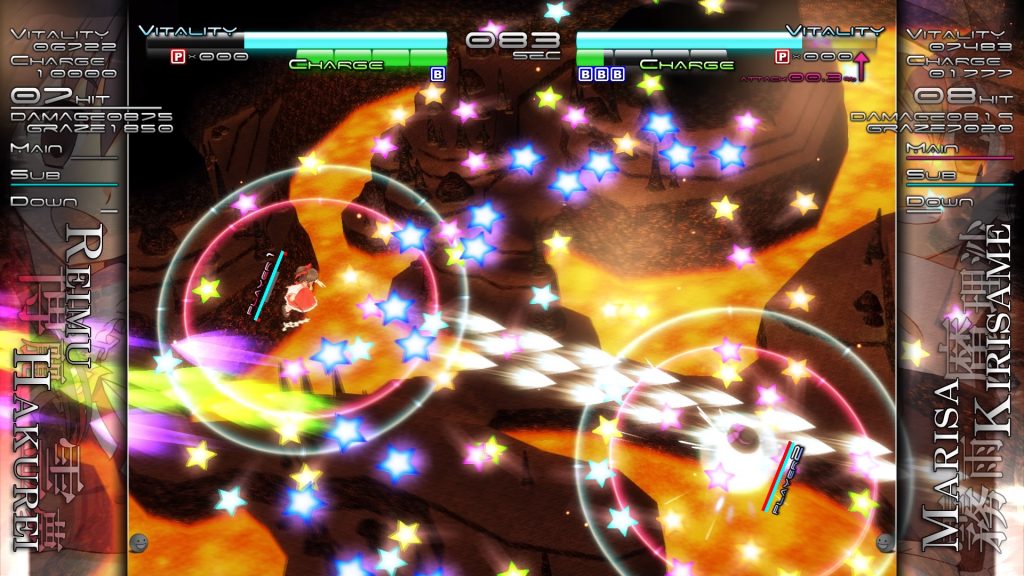 Also, the game automatically aims you at your enemy which takes away some of your free will a little.  I’d rather have a bit more control over where I’m aiming.  I don’t know but in a shoot ’em up, that seems kind of important, no?

The game is also not particularly nice looking.  The anime character art will appeal to some but the in-game action isn’t particularly attractive.  Much like in Wartech, you are viewed from above while the background spins around underneath as if you are stood on a glass floor.  It doesn’t move in relation to the players and the backdrops are relatively bland.  Wartech‘s space setting was a bit more pleasing to the eye but the designs here are kind of disappointing.  The bullets tend to stand out quite well though but you’re never going to escape a whole round unscathed (unless the AI, as previously mentioned, falls asleep) because the patterns aren’t always escapable and there are a few attacks that end up catching you unawares. 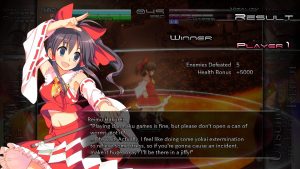 Online play is clearly what the game is designed for but good luck finding a game online.  Opponents are very few and far between.  They are also Japanese and much better than you.  This might improve but so far my experience of it is that there’s one guy out there.  Taking names.

In the end, Touhou Genso Rondo: Bullet Ballet just isn’t much fun.  It’s a niche experience that probably has a lot of nuance to it but unless you’re a fan of the Touhou series, anime and this exact weird sub-genre of gaming, then this isn’t for you.  No really.  It’s not for you.

Touhou Genso Rondo: Bullet Ballet
4 Overall
Pros
+ Some deep combat for players who want to explore the game + Do you like anime?
Cons
- A flawed game style - Not much fun to be had - Dead online - AI goes from dumb to ninja at just the worst time - Very uninspiring in-game visuals
Summary
There's probably a very small, hardcore audience for Touhou Genso Rondo: Bullet Ballet but if your logic is 'Great! I like fighting games and I like shoot 'em ups' then, seriously, buy a fighting game and a shoot 'em up and stay away from this silliness. This is a bit like kittens and ice cream. Keep them separate. Don't blend them together and try to tell me that's a good thing. Weirdo.