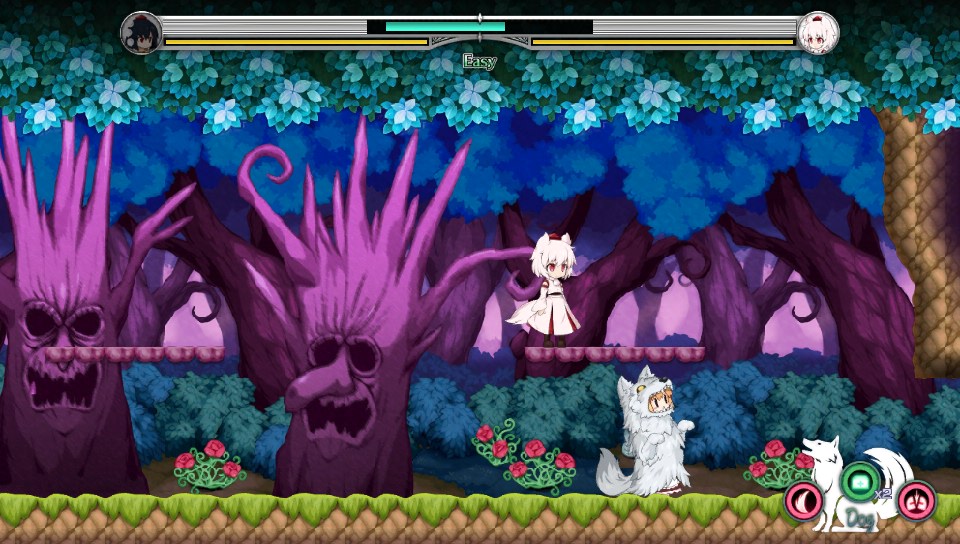 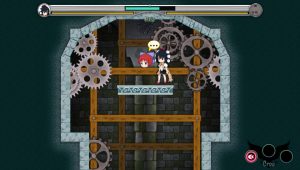 We review a lot of indie games here but very few of these originate from Japan.  Touhou Double Focus is from a small one person indie Japanese developer. Working within the Touhou universe this game features the same cast of chibi female characters which you may recognise if you’ve played any of the other games.  Although the Touhou games initially started as bullet hell shooters things have branched out a bit and this one now tackles the metroidvania style.

The story follows two characters Aya and Momiji as they get sucked into a magical book and have to explore the landscape to escape.  Touhou Double Focus is Japanese through and through, from the setting and characters through to the focus on Buddhist ideals and story, which is so light on content as to be nonexistent.  However, the entire game feels very whimsical and joyous and this made a refreshing change in style to the majority of other Western developed games I’ve played.

As the games title suggests you get to play as both the lead characters throughout the game, able to switch between the two at the press of a button, doubling your focus if you will.  Pleasantly both characters actually have different skill sets and feel genuinely different to play as.  Momiji can run and climb walls, where as Aya has more ranged attacks and can float.  Taking these two characters you’re tasked with solving simple environmental puzzles to progress through the map.

As a metroidvania style game the map is displayed as a series of interconnected rooms and separated into distinct visual areas.  Touhou Double Focus is all about exploration and uncovering this map, as such you’ll come across areas you can’t access yet indicating you’ll need a certain skill in order to get past.  It isn’t the most interesting of maps and it feels very generic, not helped by the small overall size and the way a lot of the screens feel very empty with maybe only one or two baddies present. 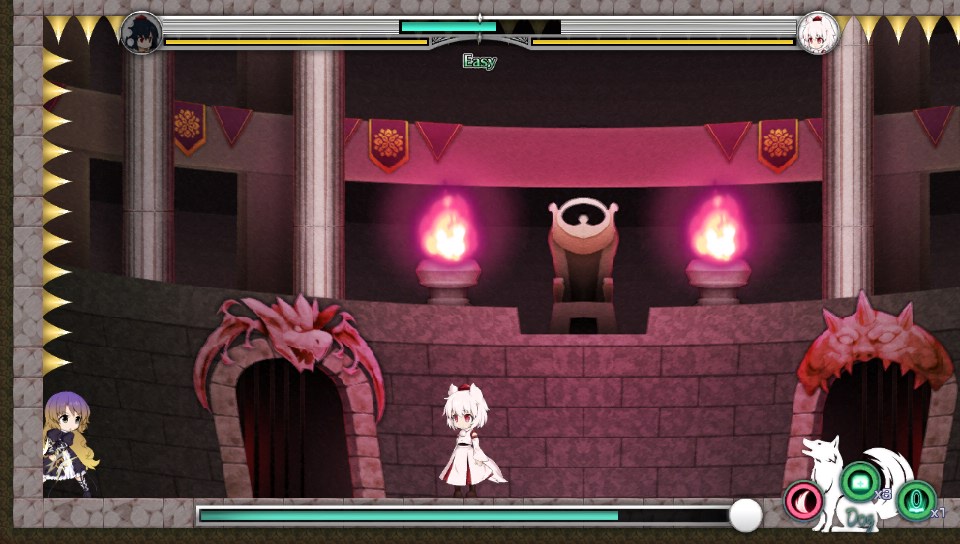 The combat is relatively promising though and there is a fair bit of customisation available to it as actions are mapped to three of the face buttons, with X being used as jump.  Progression through the game unlocks skills and these can in turn be mapped to the three face buttons.  On top of this each character also has three button pallets to switch between on the fly, done so via a tap of the touch screen.  You’re able to assign actions to each of the three buttons across each of the three pallets giving the possibility to have quick access to nine moves.  This leads to a great deal of customisation and is fairly deep. Unfortunately the game never really utilises this in a gameplay way, there is never a need to quickly swap between styles and the whole thing ends up feeling a tad wasted.  The majority of combat ends up with you just using your standard attack, as this is more than serviceable.  Add to this the fact there is no levelling up, or shopping mechanic here and the focus on combat feels almost wasted.

Touhou Double Focus does has a few interesting ideas and the gameplay manages to just about hold up to give an interesting game.  The game isn’t without issues though and these frustrate a fair bit.  The first and most prominent was the slow down which afflicted the game in seemingly the most innocuous of situations.  I mentioned above how many screens will only have one baddie on them, well often even this will cause some terrible slowdown and in particular the second boss battle was infuriating due to this.  The other main issue I came across was some really poor map design, with rooms which are designed so that you end up getting stuck at the end of them and unable to escape without using a precious teleport spell back to base.  I also faced issues with the overall difficulty of the game with some instant death situations and tricky enemies, and I was playing on easy mode. 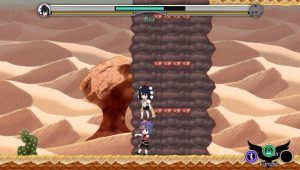 Overall Touhou Double Focus is an okish metroidvania game.  It’s not massively long or even deep from a story telling point of view, and the slowdown and average map design weigh heavy on the game.  You’re left then with the action to carry you through the three or so hours of game, and unfortunately the action isn’t necessarily up to this limited task.  This is possibly one to look at from a curiosity point of view in seeing what Japanese indie games look like, but other than that there are better games in this style out there.

Touhou Double Focus
5 Overall
Pros
+ Nice to see Japanese indie games make it over here + There is a nice idea to be found in customisation of the action buttons + It feels a pretty much average game in many respects
Cons
- Slowdown issues frustrate the gameplay - The map feels both generic and poorly designed - The combat is mostly pointless - The story is instantly forgettable
Summary
Touhou Double Focus is an okish metroidvania game. It’s not massively long or even deep from a story telling point of view, and the slowdown and average map design weigh heavy on the game. You’re left then with the action to carry you through the three or so hours of game, and unfortunately the action isn’t necessarily up to this limited task.