When a game comes in from Finnish publishers Ratalaika Games, we usually know what to expect.  And that is a platinum trophy within thirty minutes.  But Thy Sword is that rarest of unicorns, a Rata joint where you have to put some time in.  Obstensibly, this is a rogue-lite platformer/hack and slasher where you set off on an adventure to free the land from some seriously evil entities.

There’s no surprises in terms of first impressions.  This is a 2D, 16-bit kind of an affair but what we really liked is the fact that each level is set on one screen.  Despite the all the hacking and slashing, Thy Sword actually feels more like a classic arcade game such as Bubble Bobble, Rodland or Bomb Jack. 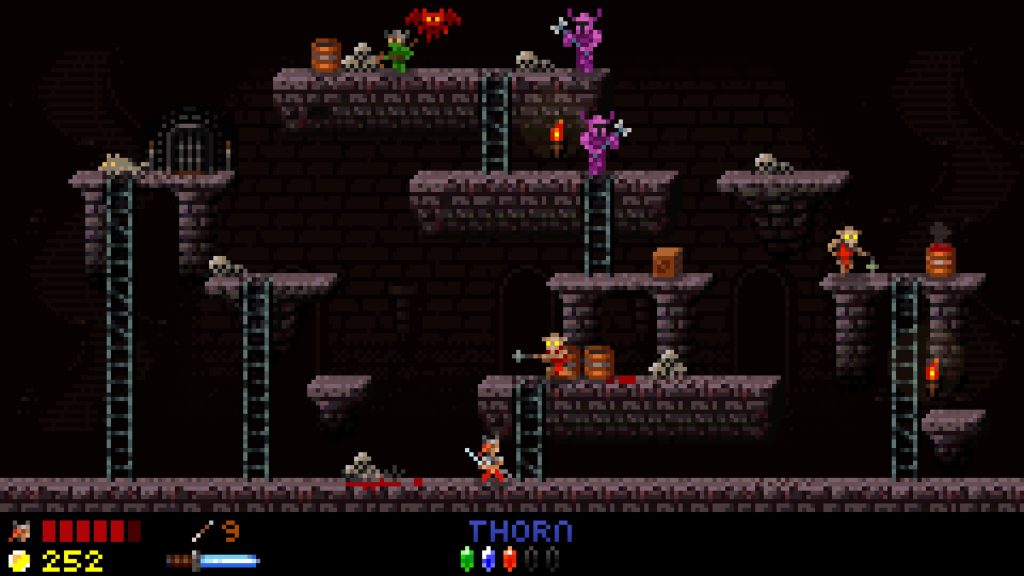 There are ten or so worlds, each with five levels.  Fail a level and you’ll have to restart that world.  On each level there are platforms, a number of enemies and a door.  Kill all the enemies and the door opens.  It’s simple enough but there are a variety of these enemies each with their own attacks and defensive techniques and so you’ll definitely need to be cautious when navigating your way around.

Much like those arcade games I mentioned, to be successful here you’ll need to understand the game mechanics.  You’ll need to know when to use your sword or when to fall back to a ranged attack and you’ll need to find the best way to approach each enemy to successfully attack them.  I mean, that’s true of all games, but there’s a really nice old-school feel to the game mechanics here.  You really feel that this is a game world with its own rules and that you need to operate within them.  That’s true of all games but you feel it here and in a good world. 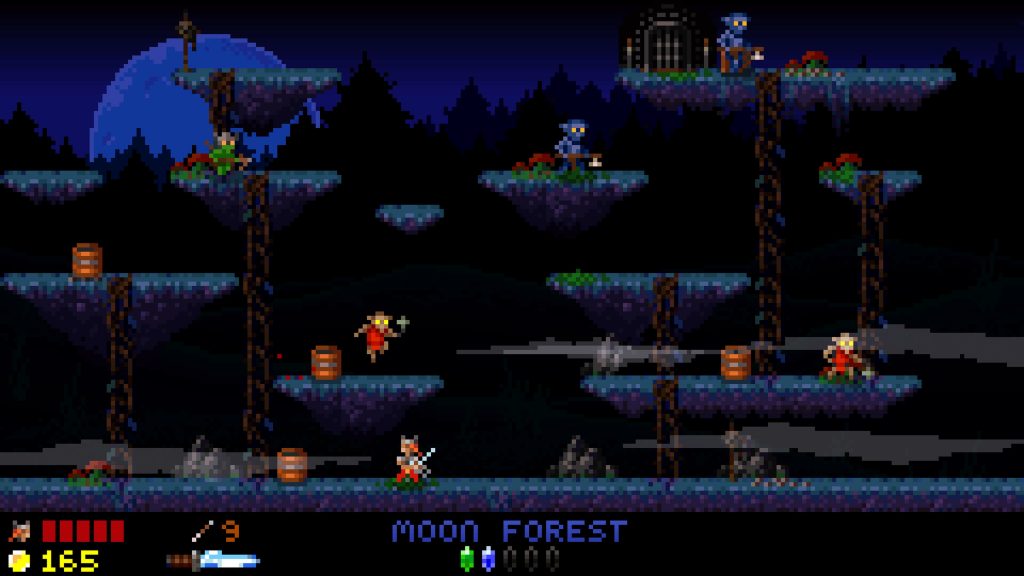 Some of the worlds have bosses too.  These can be really show stoppers with devastating attacks that’ll cause you some real problems initially.  Again, you just need to observe their movements and attacks and figure out how to approach but, for a Ratalaika game, these are genuinely tricky.  Not in a post-Souls, difficulty-obsessed way but definitely in a way that will snap you out of your comfort zone for a while.

To help even things up, you do get to upgrade a little.  Enemies drop cash and this can be spent between worlds at a shopping area.  Here you can upgrade your sword and bow for more damage or find rings, boots and amulets that offer new skills or protection.  The selection of gear is a little disappointing though and we found out that really you just want to get the fire sword if you want to get past the game’s final boss, so it’s not like there are a load of meaningful builds worth trying out. 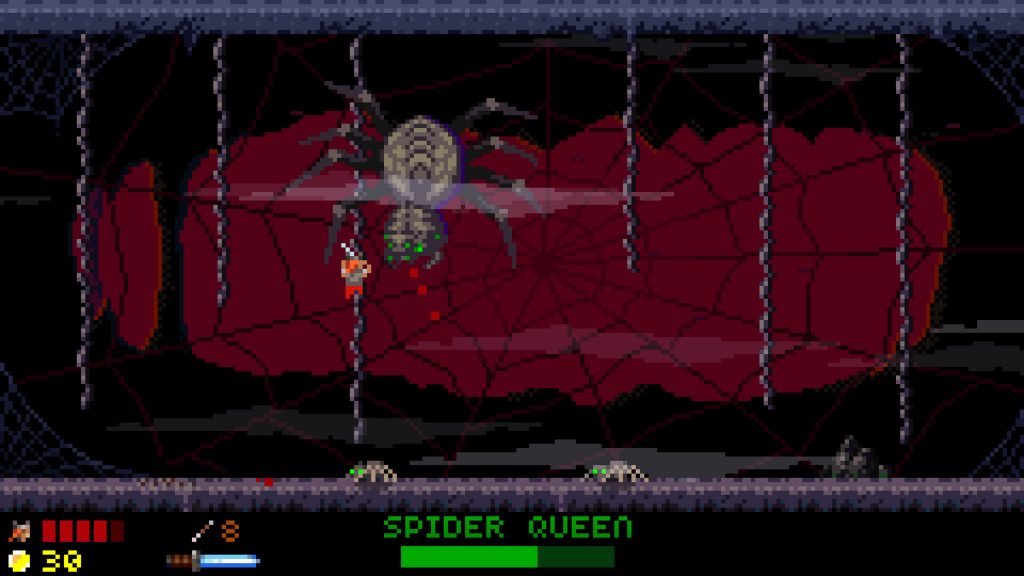 Also, the gear costs quite a bit of money.  You can boost your funds by winning a Black Jack card game (although as with real Black Jack, the odds are slightly against you) but having to beat 10 stages in a row just to afford one upgrade is a bit slow for our tastes.  If you’re letting us upgrade, keep those upgrades coming.

Later on in the game you will rescue two characters who become playable in later playthroughs but I found these to be less useful that the two stock characters.  Still, it’s nice for them to provide a bit of replay value.  However, unlike Ratalaika’s other games, the game doesn’t spit all of its trophies at you right away and there are a couple of missable ones, so their usual target audience may find themselves playing through the game twice. 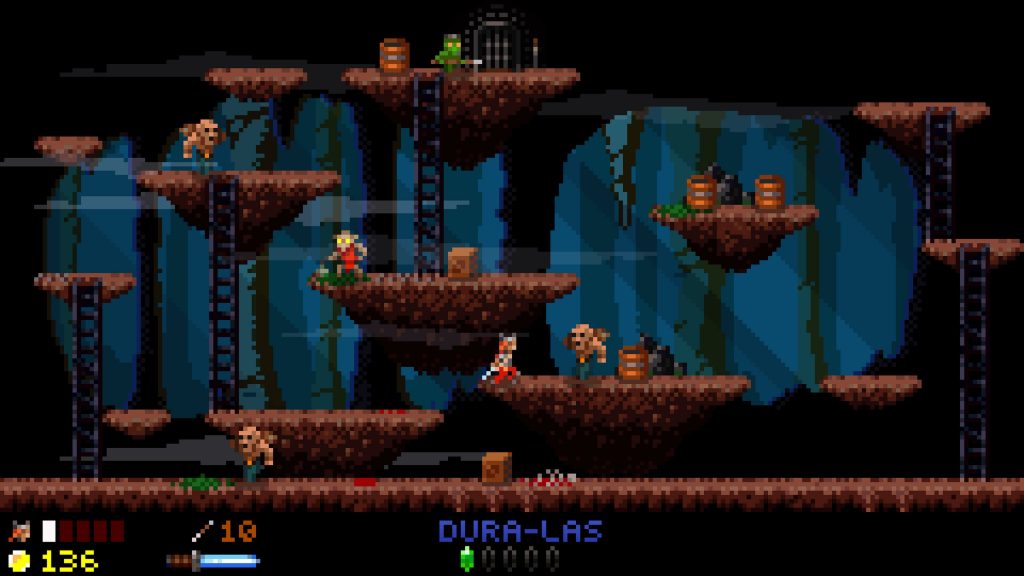 This happened to me but for a different reason.  I was really struggling with the final boss who, annoyingly, does that thing of switching to a different form (complete with a full health bar) after you beat him.  I realised that I needed a better bow and sword to beat him and that my choices had made life a lot harder for me.  So I bailed on my save and replayed the whole game and I actually really enjoyed it.

Thy Sword might be Ratalaika’s best game yet and that’s partly because they’ve given it the respect of making you finish it if you care about that platinum trophy and also because of how clear those game mechanics are.  It’s still the kind of thing you can beat in an evening but it’ll take a few hours and you’ll have fun doing it. 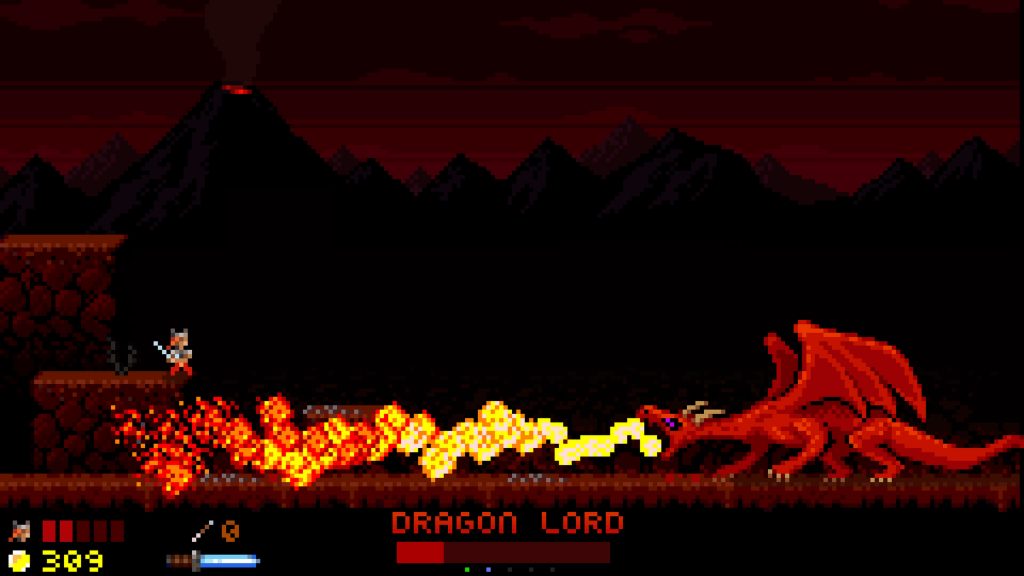 The pixel art visuals are okay.  The animation is good and there’s quite a bit of character in the sprites but if you’re bored to tears of 16-bit graphics, then this might be a source of annoyance.  The chip tune music fits in with that presentation too.  It’d be easy to write the presentation off as old school and lazy but there is a feeling to it at all that they did care when they made this game.

Thy Sword
7 Overall
Pros
+ Great classic arcade feel
+ Well-balanced challenge
+ Good game mechanics
Cons
- Its loot game is a bit weak
- Very old school presentation
- Beatable in one session
Summary
Thy Sword is a platform/hack and slasher that offers up some classic arcade style action with good game mechanics and a well-pitched level of challenge.