Developed by Stately Snail and ported to the PS4 by trophy feeders Ratalaika Games Shadow of Loot Box takes everything popular in games today and squishes it into sixteen levels. It’s got a skill tree, loot boxes, survival gameplay, crafting, collectibles, horror and more. If you’ve seen a certain mechanic in a game chances are you’ll find it here. 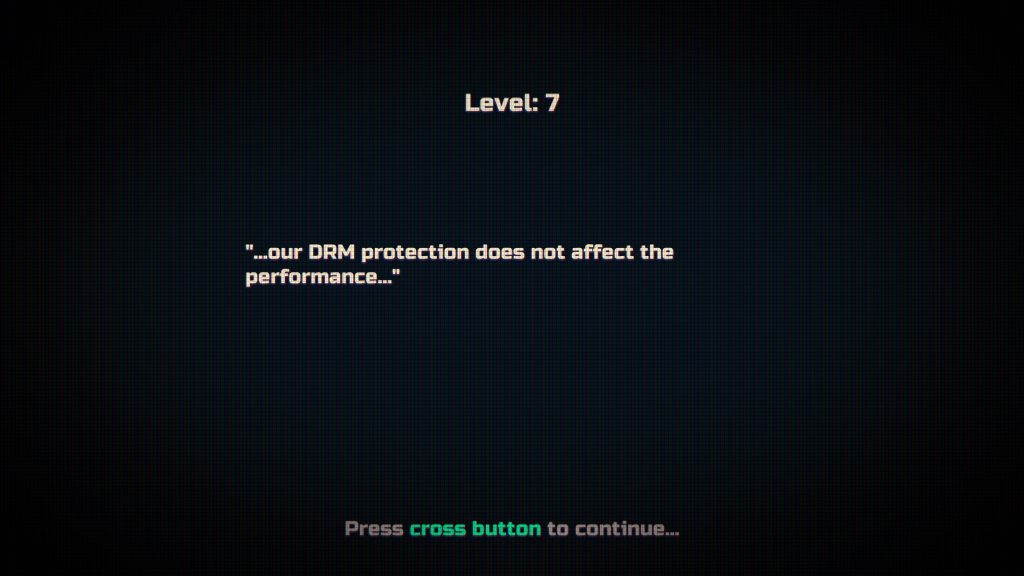 Well, sort of. Shadow of Loot Box, as you might have inferred from the title, is having some fun at the games industry’s expense. Every level is based around an element of modern day gaming that people may not be fond of or that other developers base their entire game around because it’s popular or a money-spinner. The first level simply has you running around a small dungeon-like area collecting orbs that gift you experience. With enough experience you’ll level up and earn a point which you can use to purchase a skill from your skill tree. You can initially buy the ability to run which ups your movement speed, letting you make it past some spike traps to collect more orbs. By the end of the level you can jump, interact with objects and open doors which allows you to leave the level.

Level two opens up more, with a village and its surrounding area. Enemies roam the outskirts and villagers offer quests for you to complete. This is the game’s take on procedural quest design, with three villagers offering the same three different quest types over and over again with a loot box as a reward. You can stay here and complete quests forever if you choose though the quests are simple ‘kill x number of enemies’ or fetch quests, which is the point the game is trying to make I guess. When you open a loot box you gain a random assortment of items, from ammo for your weapons to health to experience which will let you unlock more of your tree. Nothing exciting, there isn’t even a flashy animation. 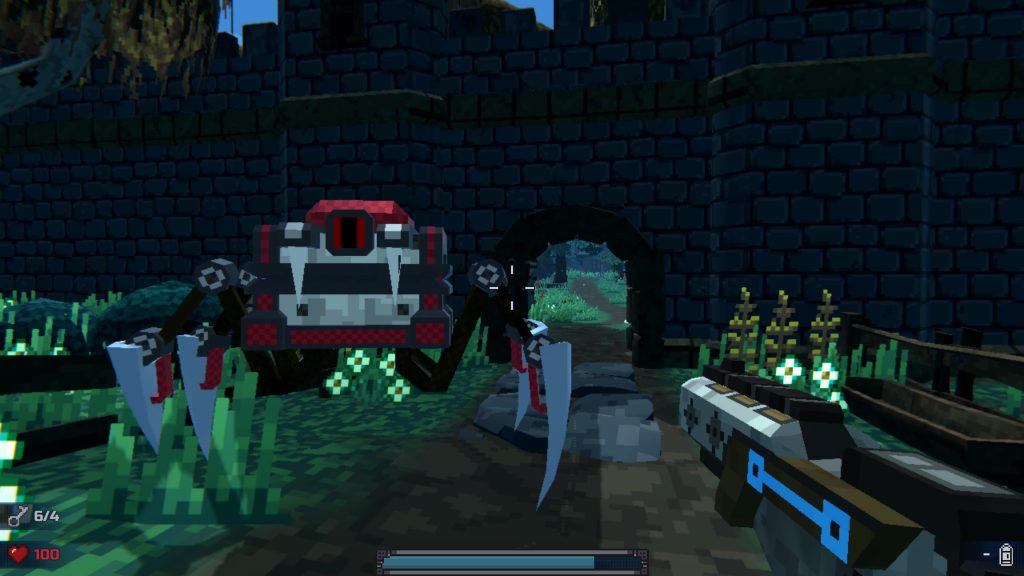 The levels continue in this vein, with an early access level that is unfinished, a level taken out ‘to be sold later’ as DLC, a level where you have to keep warm and fed as you explore, an ‘open world’ filled with collectibles (question marks like the Riddler Trophies from the Arkham games) and more.

Unfortunately none of them are that fun to play. You play from a first person perspective and will eventually have access to four weapons, three or which have limited ammo. The controls are quite poor however with precise aiming being very difficult with a controller and there is only one enemy behaviour which is to run after you in a straight line. If you decide to engage the enemy then you have the choice of which weapon to use and then you just run backwards whilst firing until they die. Sometimes they’ll drop some health and there is one level where they drop gems but generally they’ll drop nothing (you only get experience from loot crates after the first level) so running past them is often preferable.

Level design is never fantastic with each being quite small, even the open world stage, with paths that branch off every now and then. You’ll get the odd puzzle but it’s usually just a matter of finding a block or four to place on some switches. Your goal is always to find a key or four to exit the level, sometimes with a boss blocking your way (same technique applies as when fighting regular enemies, but they have a shield that drops every now and then) and even if the obstacles in your way are dressed differently the gameplay is the same: run around, shoot enemies, push switches. 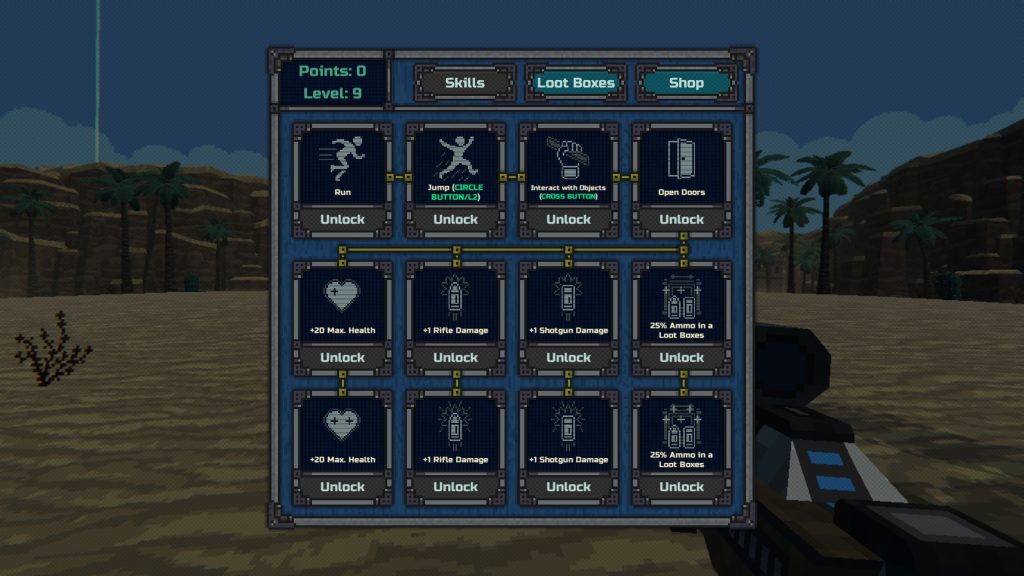 The visuals don’t help with four different environments and a similar amount of enemies, which are modelled crudely. It’s not offensive to look at but the low-fi graphical style doesn’t bring to mind any era in particular. There are grammatical errors (some are intentional, others seem less so) and the menus, specifically the skill tree, are difficult to navigate due to unclear design.

I found the joke to run thin very quickly but there are some interesting levels hidden in there. If the game played better then not only would it be more fun but I think the jokes would be more effective too, with an otherwise strong game spoiling things to add the newest fad rather than a weak game which has nothing to offer other than these mechanics. Ratalaika fans will be happy to know that the game can be completed with a platinum trophy in around an hour, though there are some missable trophies and you actually have to complete the game this time. 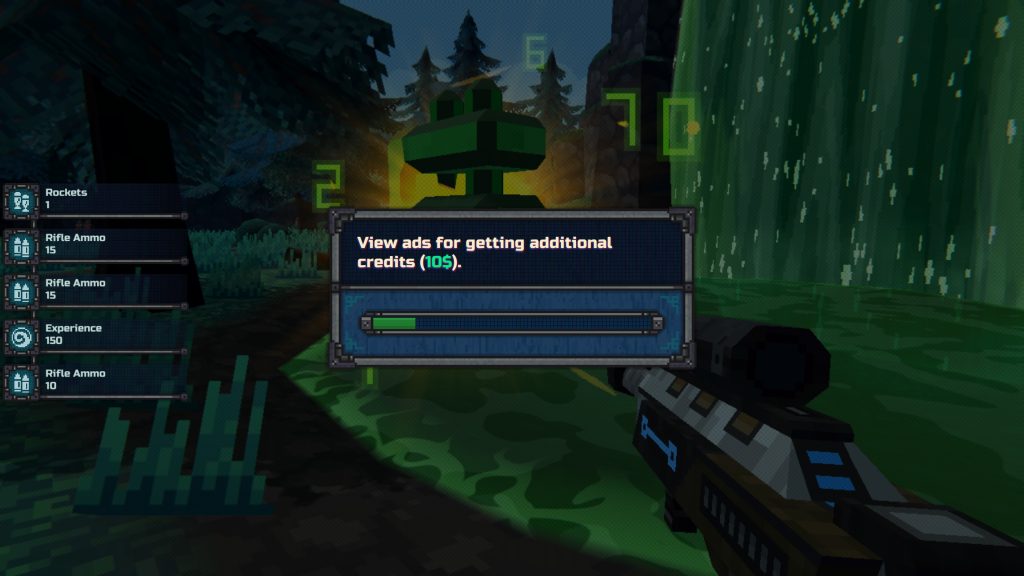 Shadow of Loot Box is an interesting idea but that’s all it really is. The gameplay is weak and repetitive and it only lasts an hour with no replay value. At £6.49 the price is low but unless you’re buying it just for a platinum trophy then your experience will be overly short and not particularly enjoyable either.

Shadow of Loot Box
4 Overall
Pros
+ A very interesting premise
+ Some levels are more fun than others
+ Okay sense of humour
Cons
- Gameplay is very weak
- Even though every level has a different focus it's very repetitive
- Presentation is rough
Summary
Shadow of Loot Box has some interesting ideas but the gameplay is unpolished and repetitive making it difficult for even the better jokes to land.