I have to admit to not knowing about Ninja Saviors. There was an arcade game called The Ninja Warriors back in the day and a SNES sequel, which this is a conversion of, with a name change that is probably due to naming rights. The Ninja Saviors: Return of the Warriors has come to PS4 and I’m glad to say I’m no longer ignorant. 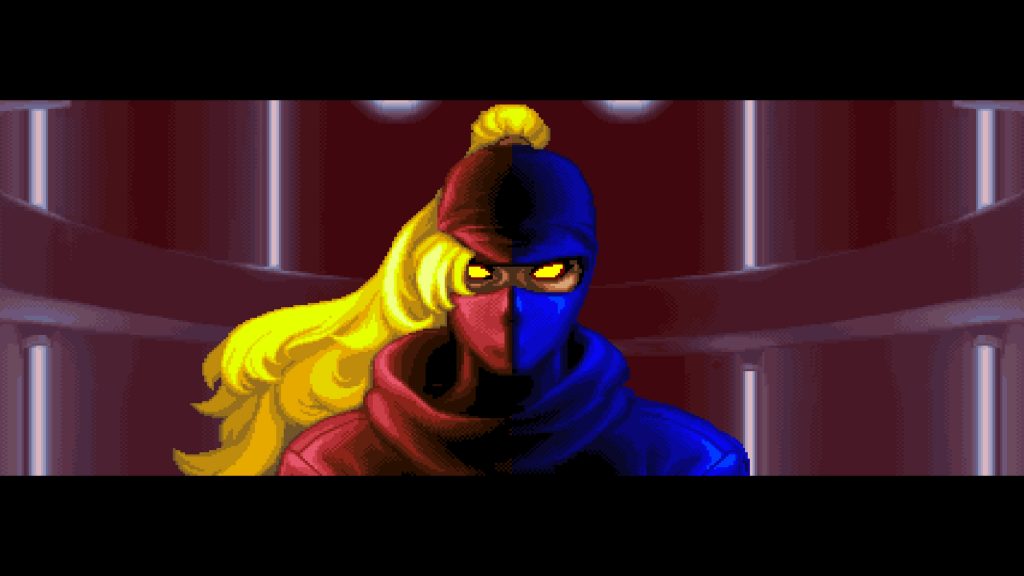 As an arcade style title you don’t need a story, but this one involves an evil tyrant who rules with an army of soldiers, mutants and robots. Some experimental ninja robots are created by the resistance to overthrow him and you play as one of these robot ninjas.

There are three to choose from initially with a couple more to unlock as you beat the game. You’ll then take on eight levels in a scrolling 2D brawler. Unlike a Streets of Rage or Final Fight you move solely on a 2D plane, you’re not moving up and down the screen. Initially this seems like it’ll simplify things too much as this is a brawler so it’s not like you’re shooting and dodging bullets like in Contra (there are a couple of gun toting enemies, but the bullets are few and far between) but it actually allows for a more in depth move set. Each character’s abilities are different as well.

Each has a basic combo, block, a somersault, a super meter and a bomb attack, but there are many unique moves too. Kunoichi, the female looking ninja, can jump kick off enemies, do a spinning attack in mid-air and use her special meter to throw kunai. Ninja, the big slow character, can’t actually jump but spins upward in an attack using a rocket pack and can dash forward into enemies. Kamaitachi has a lunging kick, a spiral attack in the air and can use his special meter to fire kunai behind him. Each has their own unique throw attacks as well, depending on what direction is pushed. The two unlockable characters are also different, naturally. 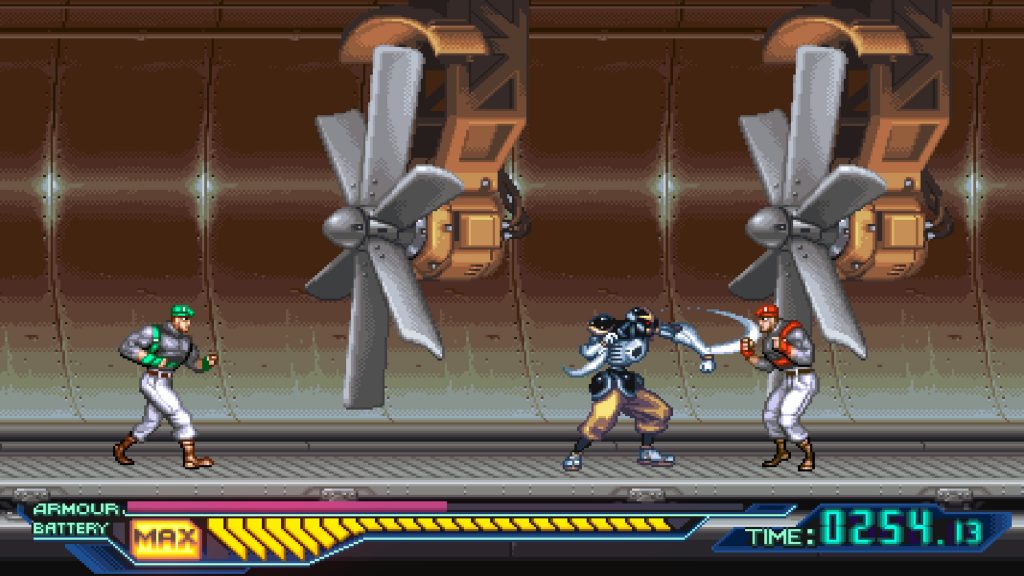 The special meter builds over time, quite quickly, so you’re incentivised to use it. Getting knocked down more often than not results in you losing it all though so ‘use it or lose it’ as they say. You can press up and attack to perform a special which uses a portion of it (like Kunoichi’s kunai throw), end a combo with a special in a similar fashion or you can use your bomb to use it all and damage everything on screen, which is great when you’re overwhelmed and far better than getting knocked down and losing the bar anyway.

You’ll start off fighting against grunt soldiers with knives that take only one hit to kill. Then slightly stronger soldiers who take more hits will appear, then soldiers with rifles, then female warriors with swords and small guys with claws and so on. Each level is punctuated with a boss who can range from a huge robot man to chainsaw wielding dude and a martial arts master. At only eight levels you’re looking at around an hour of play and you’ll see the same enemies through the levels over and over, but it mixes things up enough to not get stale, including environmental hazards, even if you have to repeat stages. 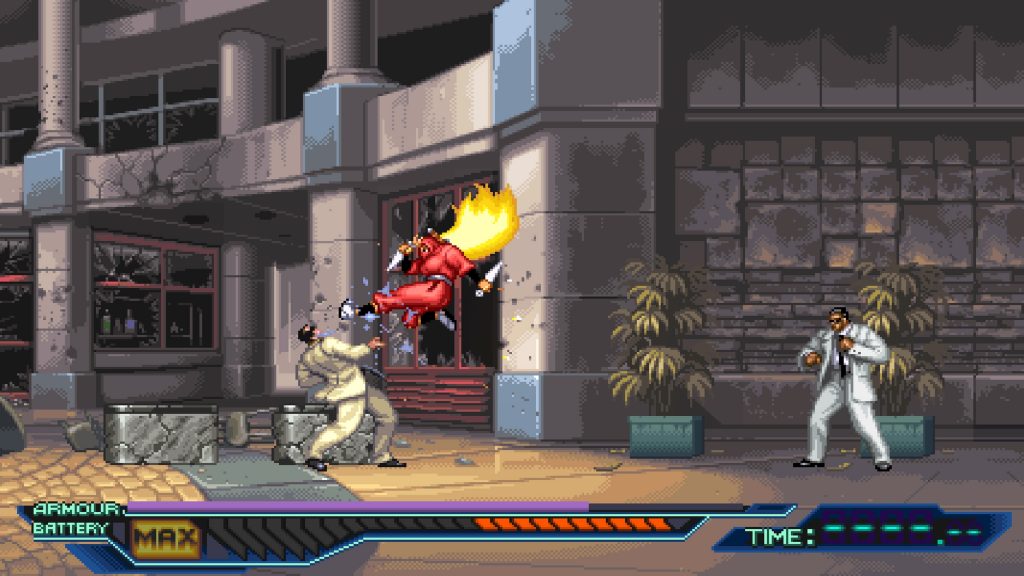 You have a health bar which ticks down with every hit, replenished at the end of each level or with rare health items. If it depletes you die and you have to continue – you only get one life. Continuing sends you back to the most recent checkpoint so without some practise you will be seeing certain sections multiple times. On my first time through I died on every level (generally at the boss) apart from one, but subsequent attempts with different characters have allowed me to get over half way through the game without continuing. Making clever use of your abilities and super meter is vital to getting through with minimal damage.

The game tempts you into attempting a 1CC thanks to its trophies and leaderboards. You’ll get a trophy for finishing each level but after that it wants you to clear the game without continuing with each character and there’s a couple of time attack ones too. Being a relatively short game I’ve been happy to turn it on for an attempt or two every now and then and enjoyed myself. The online leaderboards are the only online aspect, there’s no online multiplayer, but you can’t post a time if you continue. There is a local two player mode however if you’ve got a friend who wants to join you. There’s a hard mode too, if normal isn’t enough for you.

A quick mention should go to the remastering that’s taken place. The visual upgrade has turned the SNES game into a lost arcade classic. It’s now widescreen and sprites have been redrawn to be far more attractive and yet they keep a retro feel. There’s been no attempt to make the sprites overly smooth, which is very welcome. You have the option to use scanlines of various strength if you want as is the norm too. The music is also fantastic, with different soundtracks unlockable by completing the game with different characters, though the default one is my favourite and really encapsulates game music from the time period. 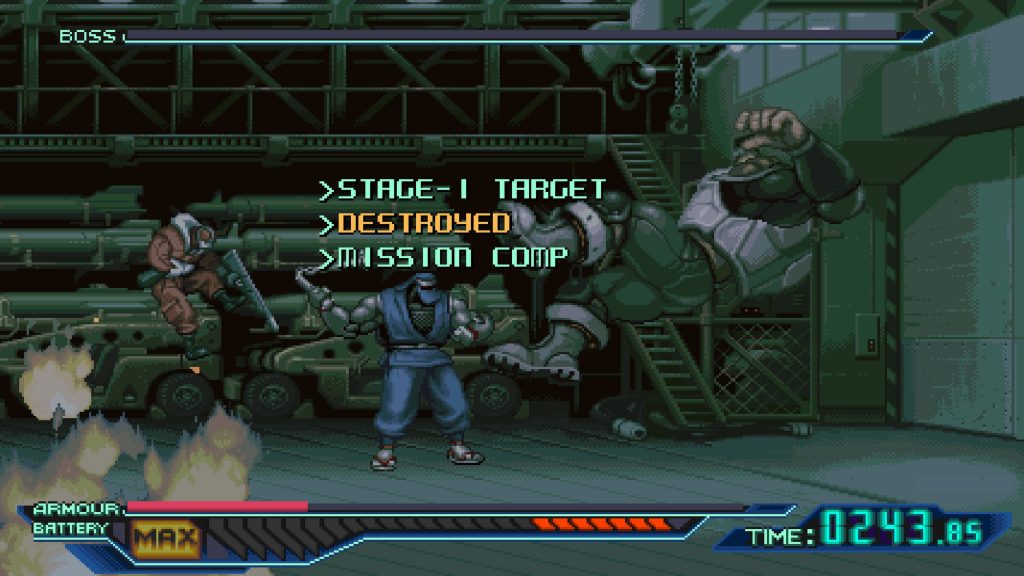 The Ninja Saviors: Return of the Warriors is a fantastic side-scrolling beat ’em up. Being an arcade experience it’s on the shorter side with the replayability coming from its difficulty, though with infinite continues anyone can complete it if they stick at it. It’s maybe a bit pricey for some brief arcade fun, but if you have a friend you can play through with on the couch or get caught up in trying to 1CC it then I’m sure you’ll get your money’s worth.

The Ninja Saviors: Return of the Warriors
8 Overall
Pros
+ Surprisingly deep combat
+ Difficult but not unfair
+ Fantastic music and updated visuals
Cons
- Very short
- No online co-op
- Quite pricey
Summary
The Ninja Saviors: Return of the Warriors is a great side-scrolling brawler. Being an arcade style title it's quite short but the desire to hit the leaderboards with a 1 Credit Clear has kept me dipping back in every now and then.