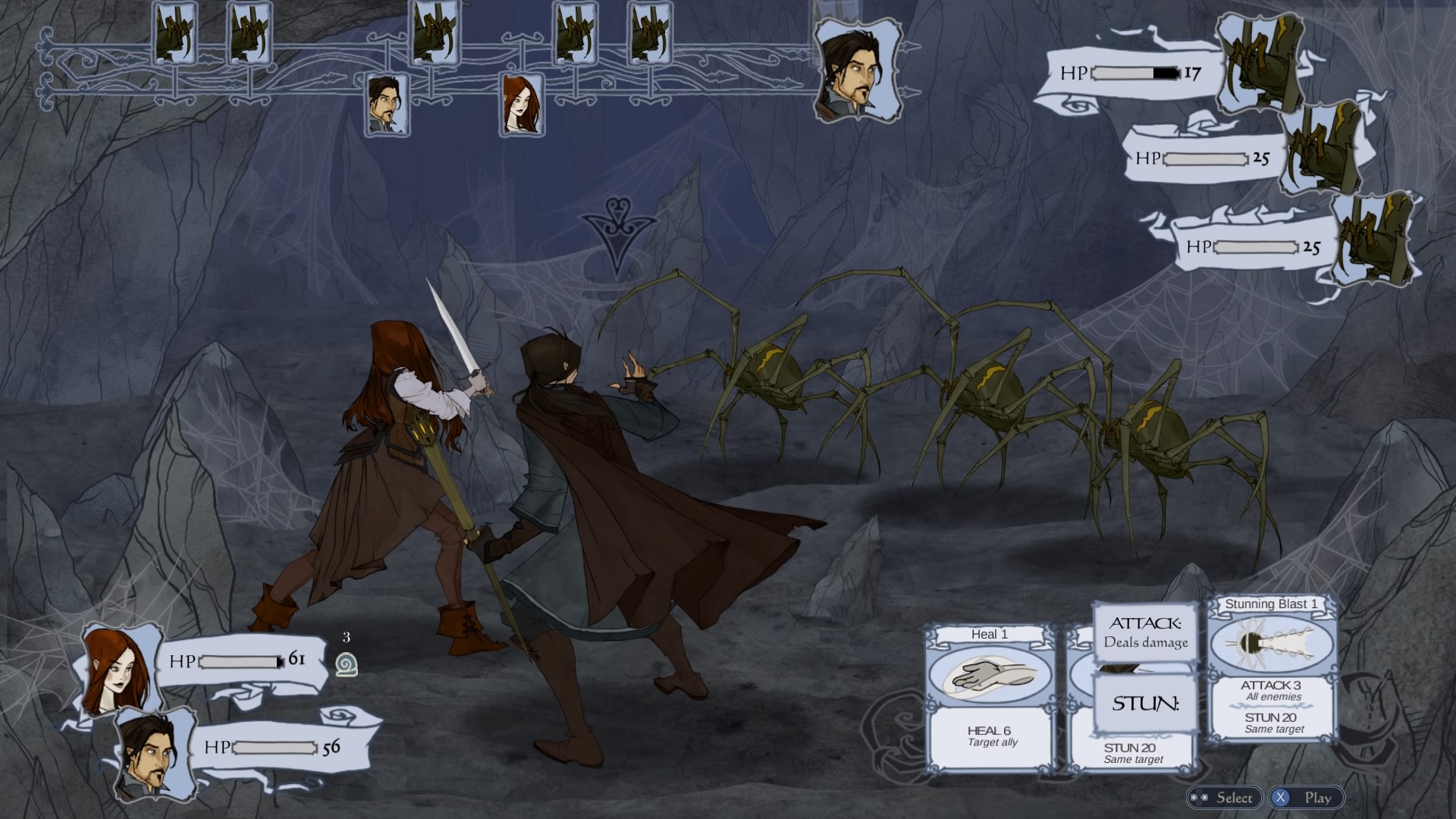 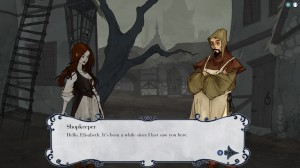 The Huntsman: Winter’s Curse is a story driven game with an RPG battle system based in the same universe as the Snow White and the Huntsman films. I didn’t realise that at the time but any sort of RPG mechanic? Count me in.

You play as Elisabeth as she searches for her missing brothers. She yearns for adventure and sets off with only her prized medallion left by her mother to aid her in finding what she seeks. Along the way she makes allies and enemies and helps those she can.

You can choose an available location from the map screen and a scene will play out between Elisabeth and whoever. These scenes are generally not interactive beyond some seemingly irrelevant choices. The only choices that seem to make a difference are ones where you can choose to fight or not, as you’ll get experience for the fight but most involve choosing whether to go left or right or some variation where you’ll end up at the same place either way, sometimes so far as to send you back to where you were to choose again. Beyond the fighting this is the only real interaction you have.

Battles are a turn based affair with your enemies lining up against you and any team mates you have. A time line is at the top of the screen which shows the order of turns and when it’s your turn three cards are drawn (you can increase this number later on). I say cards as that’s how they appear but you don’t have a deck per se, there is no limit to how many of one card you can draw or anything like that. These cards are determined by your gear, so new items you gather rather than just making you hit harder or have higher defence instead offer new skills which may be a stronger attack, a buff or heal. It’s an interesting system where a new item might not necessarily be better than what you have depending on your play style and your party set up, though none of the cards are that unusual.

You also have a simple skill tree to work through when you level up, being able to unlock traits that make you do more damage to a certain type of enemy or simple HP or speed boosts. Not every tree needs a million branches and this simple approach is fine.

Visually the game is very nice. Everything is hand drawn with 2D sprites and there are some nice subtle idle animations as people talk or battle, though there is little animation during battle with a basic attack move no matter what you do and the recoil animation is only one frame before going back to the idle animation again. Still, very pleasing to the eye. The music is very forgettable though. I actually had to go into the menu to turn it up it’s so low by default but it didn’t leave much of an impression. 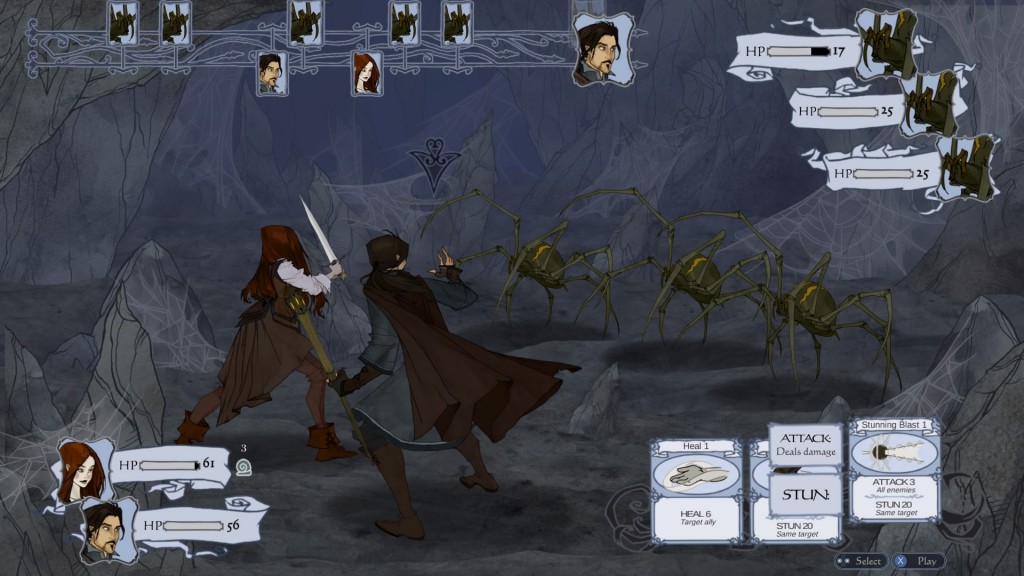 That’s all there is to The Huntsman: Winter’s Curse. You select a location which can be a main mission or a side quest, read some story (there is no dialogue other than the narrator that bookends each chapter) and then do a battle or two or three. Get some experience, maybe an item, sort out your new gear and any ability points you have and then go to the next location. There are five chapters in all and all together the game took me less than seven hours to complete. It’s a fun game if a little samey and at £17.99 maybe a bit pricey for the length considering the type of game.

Unfortunately there is a huge BUT, or maybe multiple buts as far as The Huntsman: Winter’s Curse is concerned. The first problem came when I completed the first chapter and decided to call it a day there to continue on the next day. When the next day came I loaded up the menu, pressed ‘Continue’ and the game crashed. I tried again and the same thing happened. I reinstalled the game and the same thing happened. So what was I to do? I could try again and risk losing progress again, I could just not bother reviewing it since it just seems broken but here I am so I must not have decided on that. No, I knew the game was reasonably short due to what I’d seen on Steam so I decided to play through the whole thing in one sitting. 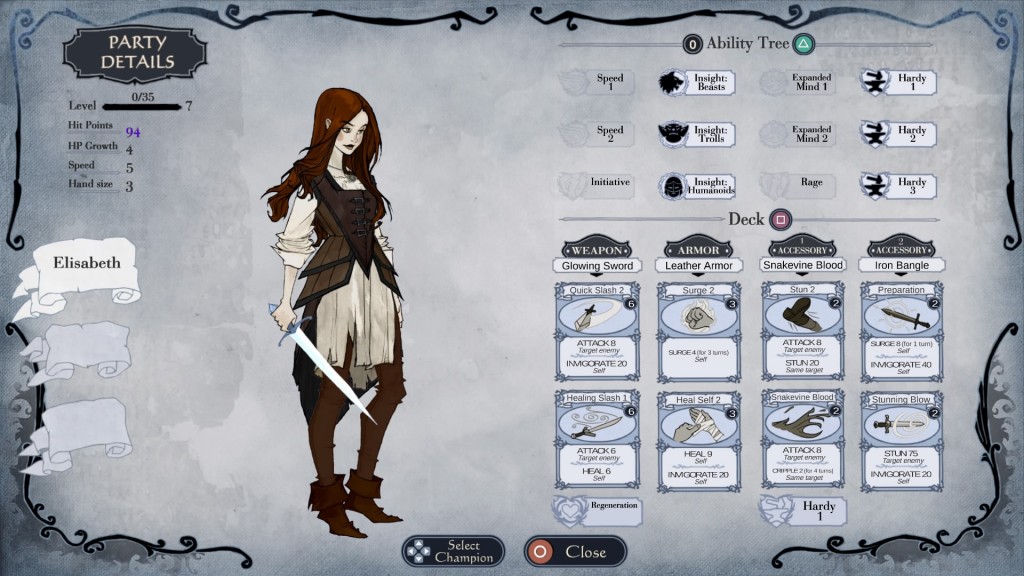 This is not the way to play The Huntsman: Winter’s Curse. The lack of any variety made what could have been a fun game to dip in and out of, maybe a chapter at a time, a real slog to get through. I did try to ‘Continue’ again once I’d completed it and it did load so maybe I was just unlucky but this is something that could happen to anyone. I can still say I enjoyed it and without any problems it would have got a 6/10, maybe even a 7/10. Unfortunately my problems didn’t stop there.

At least three times during my playthrough when I made a choice during the dialogue sections the game simply faded to the map screen and I could choose the next mission. At first I was a little confused but assumed it was meant to happen until the next scene involved my characters talking about things that hadn’t happened. Or at at least I didn’t see them happen. The game just bugged out, ended the scene and carried on. Considering the story is one of two elements to this game that’s not great. 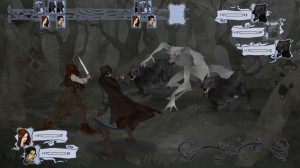 Also around chapter three or four I became unable to alter the equipment or level up the other member of my party. I could do it on my main character but pressing down on the dpad to select the other character didn’t work, so I played a huge chunk of the game with an underlevelled character with weaker equipment than he should have had. Thankfully different chapters move the character list around so I was able to eventually upgrade them just because they became the default character but for the rest of the game I could not select the second character.

There are other reported glitches that didn’t happen for me thankfully like a character who is supposed to join your group not joining you in battles making the game much harder/impossible. So remember I said I’d have given The Huntsman: Winter’s Curse a 6/10? How can I when pretty much every element of the game is broken in some way? If you’re willing to play through the game in one sitting then it is completable so it’s not completely broken and what little gameplay there is is solid, with great visuals but I cannot recommend this game in its current state. Fingers crossed for a patch as at the moment the glitches massively undermine what is actually a nice little game.

The Huntsman: Winter's Curse
3 Overall
Pros
+ Great visuals + Battle system allows for some customisation and tactics + Story is decent if not hugely original
Cons
- Little gameplay variety - Expensive for the length - Very, very broken right now
Summary
What would be a fun take on the old 'Choose Your Own Adventure' books is ultimately ruined by game-ruining bugs and poor design choices. However, The Huntsman: Winter's Curse has some exceptional graphics, a decent battle system and an okay story. A patch or two may well help it meet its potential but right now the graphic artist should be very annoyed at the coders that butchered this game.
We use cookies on our website to give you the most relevant experience by remembering your preferences and repeat visits. By clicking “Accept”, you consent to the use of ALL the cookies.
Cookie settingsACCEPTREJECT
Manage consent