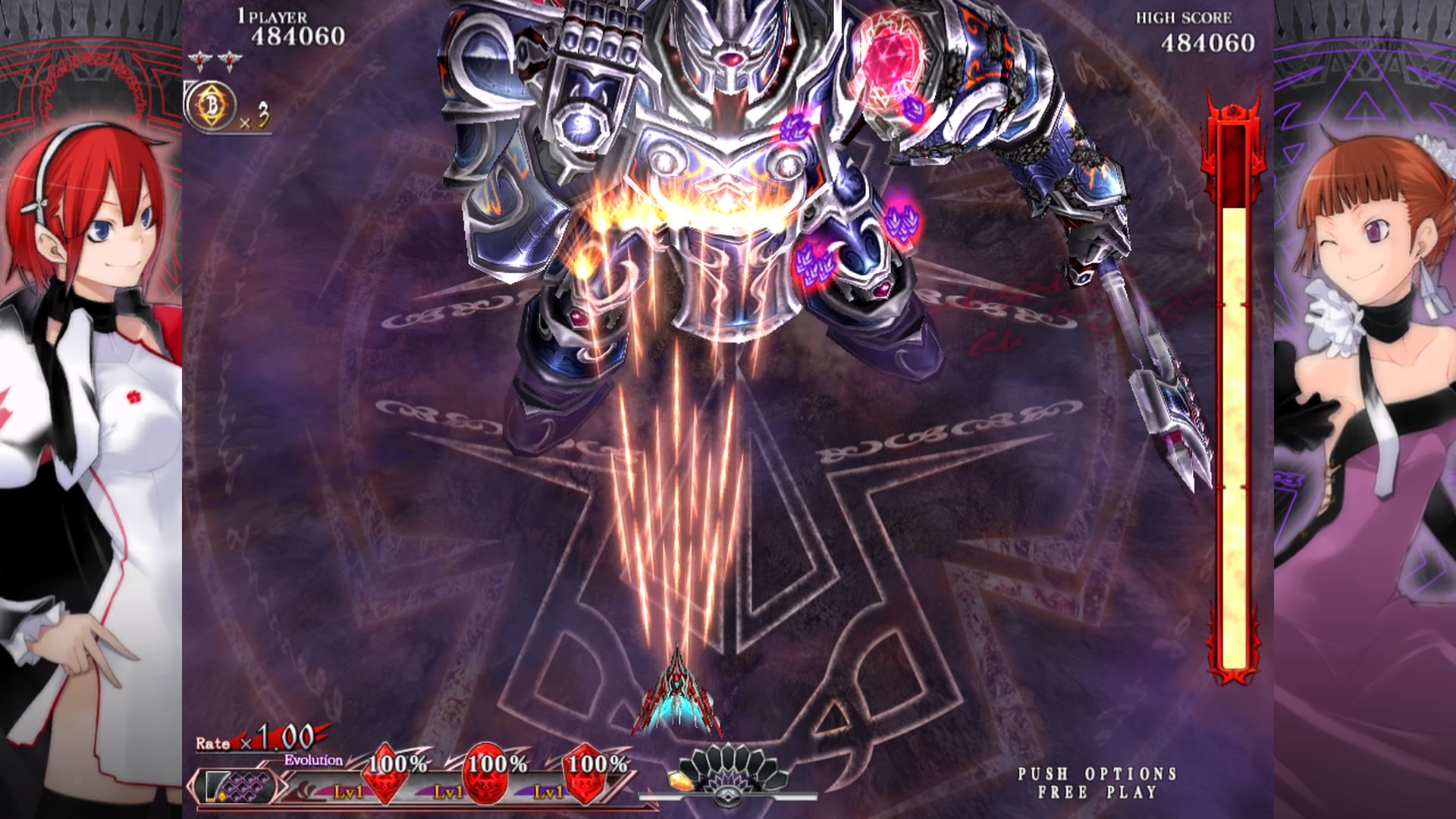 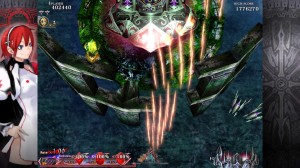 As PlayStation Country’s resident shoot ’em up fan (ie – I’m the oldest and therefore I actually played the classics in arcades when I was a kid), I’m always happy when a legit shoot ’em up shows up on the PS4. We seem to get lots of twin-stick shooters (such as Geometry Wars 3 and Super Stardust) and a few runny, gunny ones that are always a bit too sprawly, Metroidvania-y for my liking. Honest to goodness ones, in the classic horizontal or vertical style, are a fair bit rarer though, which is why it is great to see games like this one, Caladrius Blaze, that are happy to get the basics right.

Caladrius Blaze is the sequel to Caladrius, an Xbox 360 shoot ’em up that was so arcadey that it ended up getting an arcade port (according to its wiki). This sequel showed up on PS3 last year and now finds itself ported to the PS4. However, this is no cheap and cheerful little shooter. With a PSN price of £25 and an actual physical release too, Blaze has a weightier price tag than most shooters. The last full price shooter to hit these shores was Dariusburst and so its good to be reviewing this and seeing that it actually has made it to Europe. 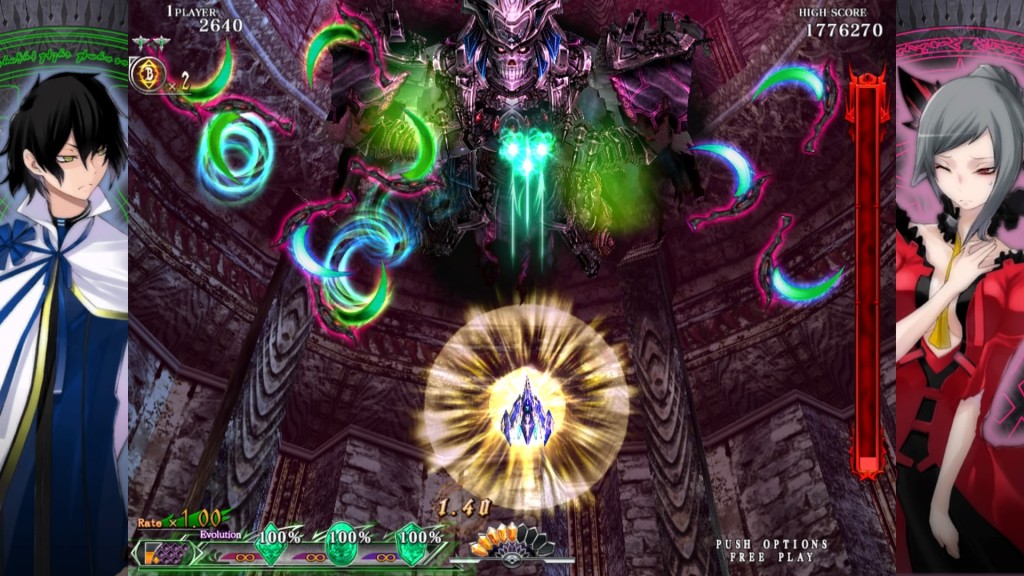 At its heart, the game is a vertically-scrolling shooter in the Cave (DoDonPachi, Espgaluda, Guwange) style. That means you can expect decent presentation and more bullets than the average American high school sees in a decade.

Ignoring the standard Japanese voiced plot (which comes with handy English subtitles with an even more handy skip option), the game starts when you pick your pilot from a choice of eight. Each one has a different weapons load out, with none of them feeling too similar, so really it comes down to your choice of play style. I tend to like a bit of spread on my basic firing where as you may want all your firepower focused directly in front of you. The choice is yours.

Once the first level starts, it soon becomes apparent that there is more to the game than you might expect. Where the X button controls your basic shooting attack, the square, circle and triangle buttons control additional elemental attacks. Using these is the key to the bigger scores and also quicker upgrading of those same attacks. Each element weapon has its own energy meter (which recharges over time) and so you have to become familiar with what each weapon can do in various situations (for example, some of them can cancel out enemy bullets) and manage their energy. It adds a bit of depth to the gameplay, even if it can take you out of the zone a little bit. 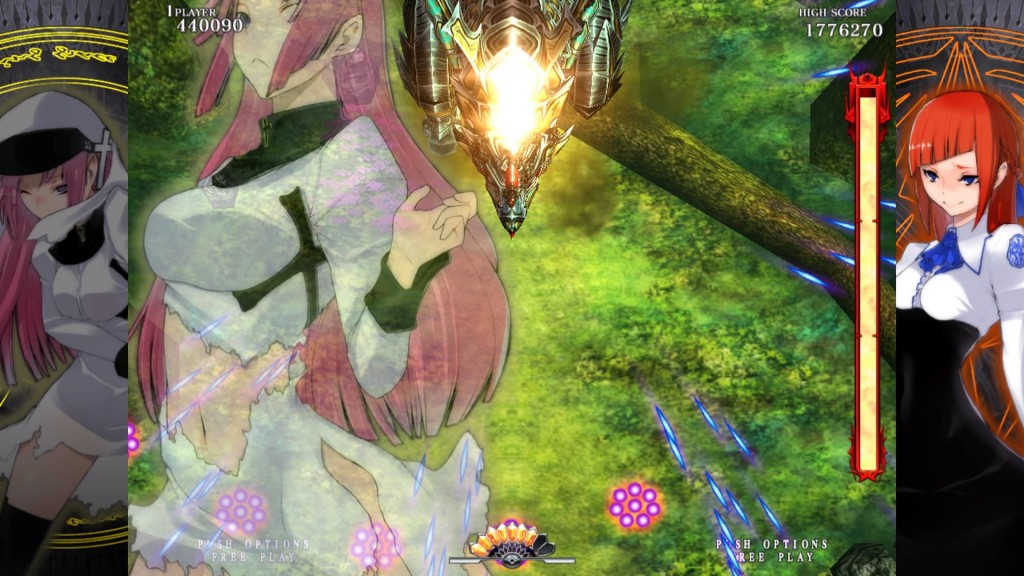 Each level plays out pretty much the same with your basic enemies, larger ones (such as tanks and whatever) before finally reaching the boss. No surprises there. The bosses are your typical giant bastards with multi-stage energy bars and BULLETS FOR DAYS.

Playing the game on Normal difficulty is humbling. Where Cave normally have ludicrous bullet patterns that are slow enough to navigate through, Moss (the developers of this game) just ‘luzz them’ at your head at ‘bare speeds.’

Its actually shockingly brutal at first. Now, certain element weapons can cancel out enemy bullets and all that but even so, bloody hell. On the plus side, Caladrius Blaze offers up a large range of difficulty options, so you’ll find your level soon enough. Mine was somewhere around ‘very easy’ and even then the game did initially cause a few headaches.

For a fairly typical shoot ’em up, there’s a lot of complexity to the gameplay here which is good as replayability is important given that, at five stages (with a sixth if you 1CC the game), Caladrius Blaze is pretty short. I like that though. Long shoot ’em ups are dull shoot ’em ups. I don’t want to memorise hundreds of stages. The more immediate the better and this game doesn’t pad itself out at all. It makes the seemingly impossible task of learning the stages seem a lot more achievable. 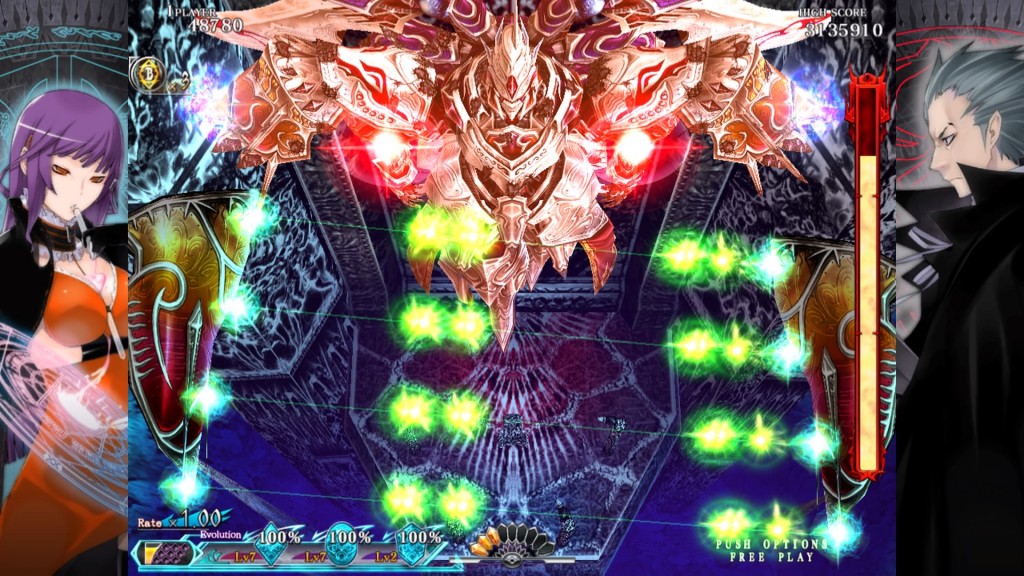 Visually the game is reasonably clear. There are so many bullets that it can get a little confusing at first. You kind of have to get your eye in, especially as things move so fast. Cave do a better job of presenting bullet hell in a way that is still clear but they don’t have the 3D background visuals that Caladrius Blaze has. While the action is strictly 2D, the backgrounds do go on a bit of a journey. This is good as it is nice to get a bit of eye candy and Caldrius Blaze is a great looking game, but it does come at a small price. Again, dropping the difficulty does help a bit.

Caladrius Blaze looks like a modern take on a classic game. While it’s nice to get a classic shooter, we don’t always want 1990s visuals and the game’s enhanced production values do really add something to the whole package, even if they might irk the purists a little.

Of course, being Japanese in origin, there’s a little bit of mandatory weirdness. Most of the characters in the game (both playable and bosses) are big-breasted girls. Damaging them, or taking damage, rips their clothing (the game calls this a ‘shame break’) for some fucking reason. It’s all just a bit weird and pervy in the classic Japanese style and, frankly, I could do without that bullshit. I know it’s a cultural thing and all that but it just seems a bit unnecessary. 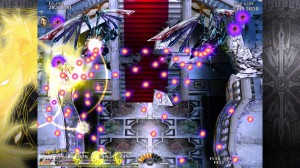 Aside from that silliness though, what you have here is a deep and polished shoot ’em up that happily sits alongside some of the best games in the genre. There’s a risk versus reward element to it, the action is tight and it looks the part. Is it worth £25? That depends on you but for a top class shoot ’em up (and one that you can’t just emulate on the PC), maybe that’s not too much to ask. I love it but younger gamers may think its a load of old retro bollocks. They’re wrong though. Caldrius Blaze is great.

Caladrius Blaze
8 Overall
Pros
+ Great shoot 'em up gameplay + Lots of weapons and characters to pick from + Good range of difficulty settings + Polished visuals + Doesn't drag at all
Cons
- Death can seemingly be a bit instant - Bullet hell patterns can be a bit much - Plot/imagery can be a bit weird - Maybe a few too many controls for some
Summary
Caladrius Blaze is a top class shoot 'em up that feels like an authentic arcade title but with console quality visuals. With plenty of options, it caters for the pro players but also us regular folk too.
We use cookies on our website to give you the most relevant experience by remembering your preferences and repeat visits. By clicking “Accept”, you consent to the use of ALL the cookies.
Cookie settingsACCEPTREJECT
Manage consent