Super Soccer Blast is an arcade style football game and by that we mean that it leaves all of the fancy presentation, realism and licensing at the door and instead offers the kind of football action we were used to seeing twenty or so years ago.  Having grown up playing Match Day on the ZX Spectrum, Sensible Soccer on the Amiga and various PS1 football games, we’re veterans of that style of game and were happy to revisit it.

This game isn’t the first to bring retro-styled football action to the PS4.  Dino Dini’s Kickoff and Active Soccer 2 DX both attempted it and failed somewhat miserably but Unfinished Pixel are the latest developers to give it a go.

In the terms of pre-match options, Super Soccer Blast keeps it simple.  The main menu gives you four choices.  Options lets you set nothing but audio levels, Challenges is a tracker for the game’s trophies, Custom allows you to create players and teams (although disappointingly you can’t insert these teams into the game’s default tournaments) and Play gets you one step closer to on the pitch action. 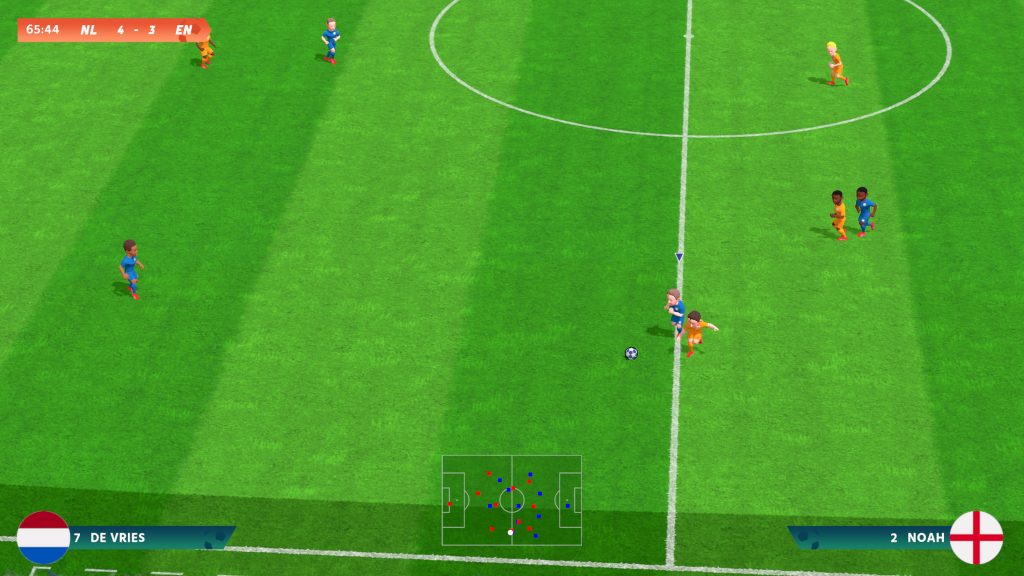 There you will find options to have a quick match with the game’s small selection of club and international teams, a custom competition maker where you can create your own leagues and cups and finally the ‘World Tour’ which offers five tournaments, a mix of leagues and cups featuring between four and ten teams.

On the pitch things are fairly typical.  The game, by default, uses a basic FIFA style control system with passing, lobs, shots and through passes mapped to the face buttons and sprinting and player selection on the shoulders.  That’s as complex as it gets though so don’t expect things like 1-2s, chipped shots, finesse shots and especially no fancy tricks.  This is particularly old school but, and whisper it quietly, it doesn’t really hurt things at all.

Indeed we found it quite refreshing to get straight to the action with no need for player line ups, sweeping stadium views and introductory commentary (indeed this game has no commentary at all).  We’ve long since been skipping over that stuff on FIFA and PES anyway.  Instead you just see your team line up, which basically doesn’t matter at all as the names are made up and you can’t pick formations, let alone modify individual player positions and tactics. 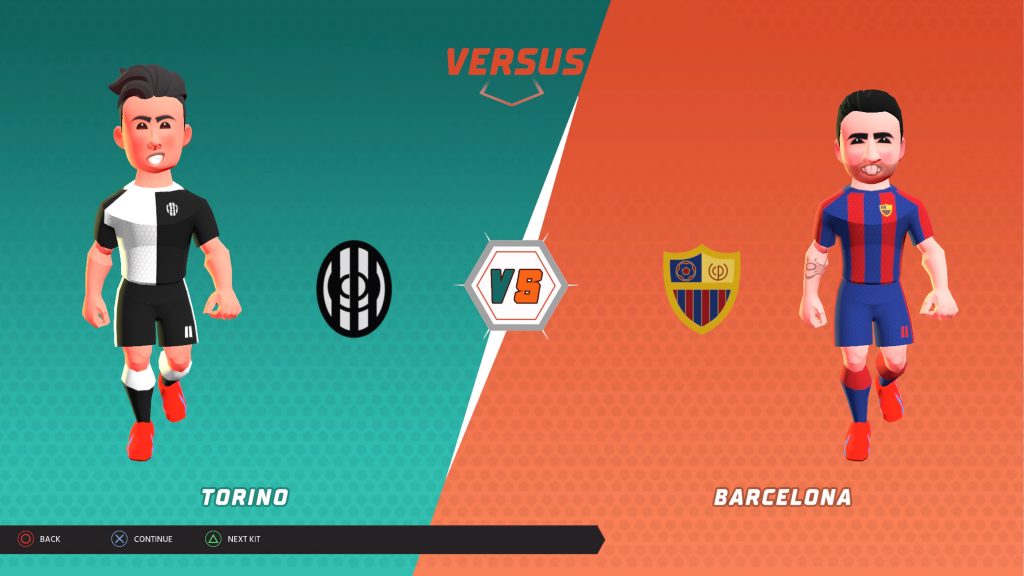 Once the game starts, it’s all very playable and fun.  The ball zips about the place nice and quickly and is always in control in that old school style where it pretty much feels attached to your player by an invisible rope and you seem to be able strike a ball accurately from anywhere, as does your opponent.  This makes for fast and exciting gameplay that feels a mile away from FIFA‘s obsessive attention to detail.

Additionally, the presentation is actually pretty good with the cute footballers being reasonably well animated and the stadiums and crowds are a big step up from Dino Dini’s Kickoff and Active Soccer 2 DX.  The game won’t win any awards for the graphics but it certainly isn’t harmed by them and before long you’ll only be focused on the game anyway. 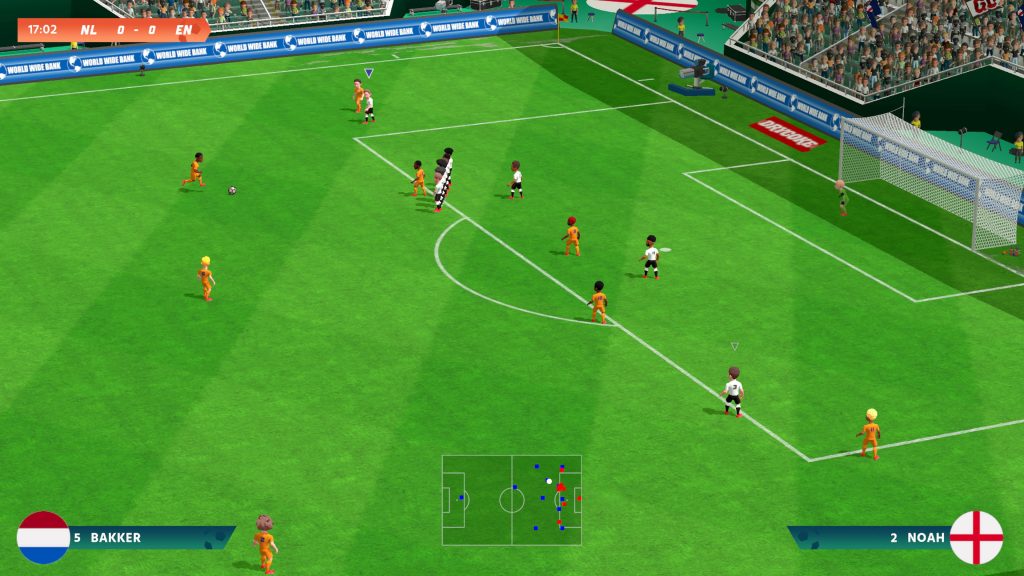 So with all that in mind, we’d love to say that this game is an unqualified success when it comes to hitting that retro brief.  However, the game also inherits a few problems that we remember football games having years ago.  The players don’t feel connected to the pitch and often seem to moonwalk around them, sliding tackles seem to be both incredibly powerful and barely ever punished when from behind and your player’s position doesn’t really affect the power and accuracy of your shot.  The difficulty settings seem to be fairly artificial and by that we mean that they just seem to affect the goalkeepers turning them from next to useless on the lowest setting to nearly unbeatable on the hardest.

However, like many old football games, they do always seem a little more vulnerable to a punt from the halfway line which speaks to a lack of balance in the game’s shooting mechanics.  But with five difficulty settings you are sure to find one that you like and if you can forgive some of these design choices, you’ll no doubt have a lot of fun with the game. 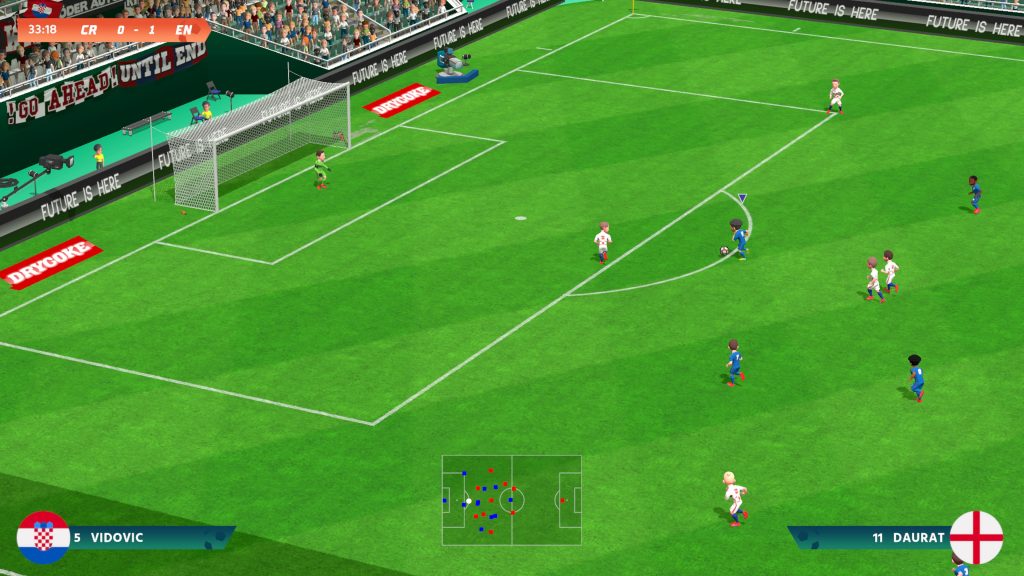 Less forgivable are some of the other problems the game has.  The game has a habit of locking up.  It happens often enough to make us believe that even the most basic playtesting would have caught it and makes this feel like a quick port rather than something designed with the PS4 in mind.  Also, after a match the game has a 50/50 chance of going back to the main menu rather than the next match in the tournament.  An in-game trophy tracker keeps tabs on how many of the game’s five main tournaments you’ve won and after winning four of them (and not getting the trophy for winning three) it turned out the game thought we had only won one.

We found all of these problems within a day of playing it and while we’re sure that these will be patched out, it speaks to a lack of care and attention.  As do other basic things such as how the game doesn’t auto-detect similar kits (although you can manually change them) or how 99% of the players have red boots despite there being a full palette of options for them.   While none of these things are game breaking (although the crashes are very frustrating) they do take the shine off of what would otherwise be the best arcade style football game in years.

We’ll be keeping an eye on any updates and patches though and hopefully Unfinished Pixel can put some much-needed finishes to the game but until then, this is a fun alternative to the somewhat bloated AAA alternatives out there.

Super Soccer Blast
7 Overall
Pros
+ Very playable
+ Reasonably good visuals
+ Not weighed down by unnecessary details
Cons
- Technical problems spoil it a little
- Has a general lack of finish
Summary
Super Soccer Blast is the best budget football game on the system and one that offers some old-school footballing fun for those of us who remember the pre-FIFA days fondly but a lack of finish, and some technical issues, spoil the party a little.