Super Mega Space Blaster Special Turbo is a retro-inspired shoot ’em up by Manchester-based dev partnership Bare Knuckle Games.  There’s been something of a glut of shoot ’em ups released on PSN recently with a lot of sub-genres and graphical styles in evidence but this game manages to bring something a little different to the party.

While looking like a twin-stick shooter, and sort of playing like one after a while, this isn’t what you’d expect.  You move your ship around with the left stick and fire with R1 but you don’t aim with the right stick, at least not until you unlock a ship that lets you do that.  The other main difference between this and a regular twin-sticker is that the left stick doesn’t move you where you’d expect but rather controls your rotation, more like a game of Asteroids.

This takes a bit of adjusting too and, for me at least, it kind of makes the right stick aiming impossible because that stick does behave as you’d expect from a twin-stick shooter but jars with the left stick movement.  Not that it affected my experience too much as I was happy to keep using the game’s initial control scheme. 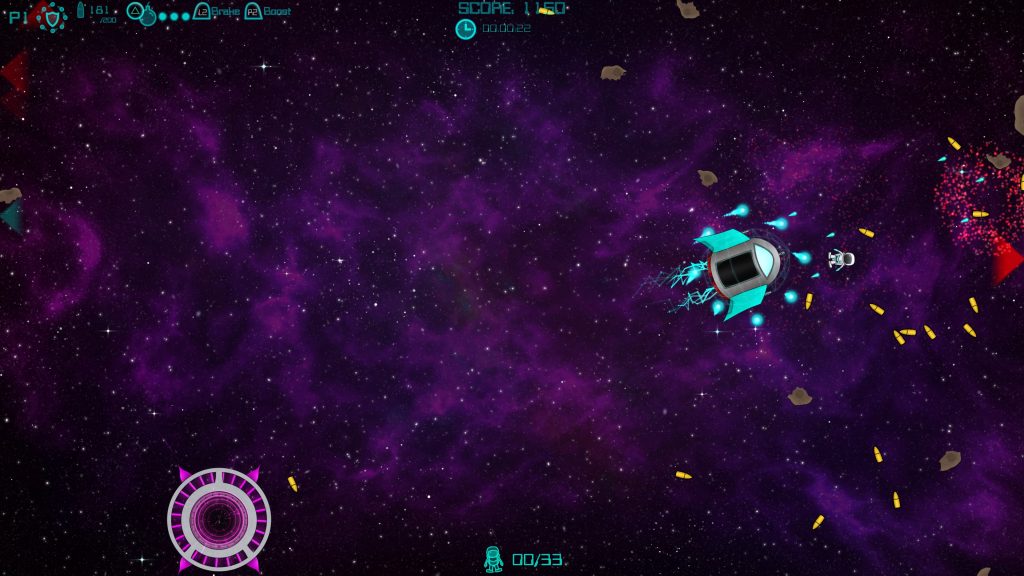 The main gameplay mechanic involves you flying around the screen, shooting enemies as you’d expect.  At first the enemies are fairly passive with floating asteroids and unaimed rockets but eventually you’ll be pursued by enemies that stalk and shoot at you.  The game does get quite taxing after a while but thankfully help is at hand in the form of lots of power-ups.  These give you handy temporary firepower boost adding things like lasers, spread shots, homing rockets and so or defensive add-ons like shields or protective orbs.

There are always a lot of enemies on screen and so there’s a little bit of risk versus reward in chasing down those power-ups.  Also, there are a couple of extra things to think about.  You do have limited fuel (in some modes) and ammo.  Enemies drop both of these but you do need to be careful if you don’t want to end up stranded.  We’re not a fan of shoot ’em ups that limit ammo but it’s not really a problem here at all. 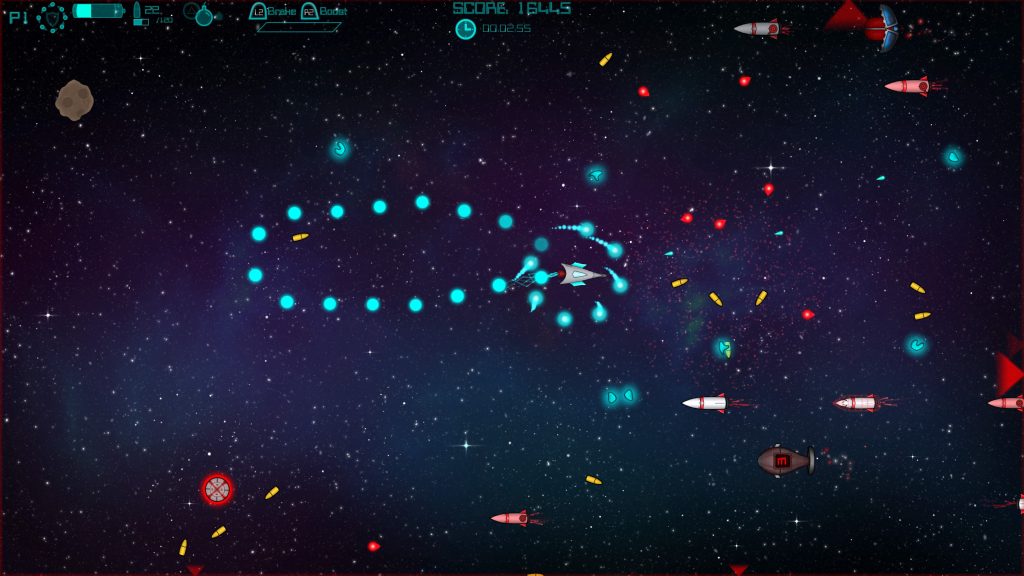 We mentioned that there are a few modes and this is one of the game’s strengths.  You have a selection of single player and co-op modes.  The main ones are ‘Survival’ where you can’t completely stop moving and are constantly firing, putting you at risk of running out of bullets, ‘Protect Mother’ which puts a giant, vulnerable ship at the bottom of the screen that you have to protect in a sort of Missile Command kind of way and ‘Save the Colony’ which is a lot more forgiving than the other modes and sees you rescuing floating spacemen.

These modes can be played in co-op or single player and then you also get some adversarial local multiplayer modes.  To keep you playing the three main modes, the game offers challenges such as surviving for a set time in a particular mode, rescuing a certain number of spacemen without firing and so on.  It does mean you have to get out of your comfort zone and play all the modes. 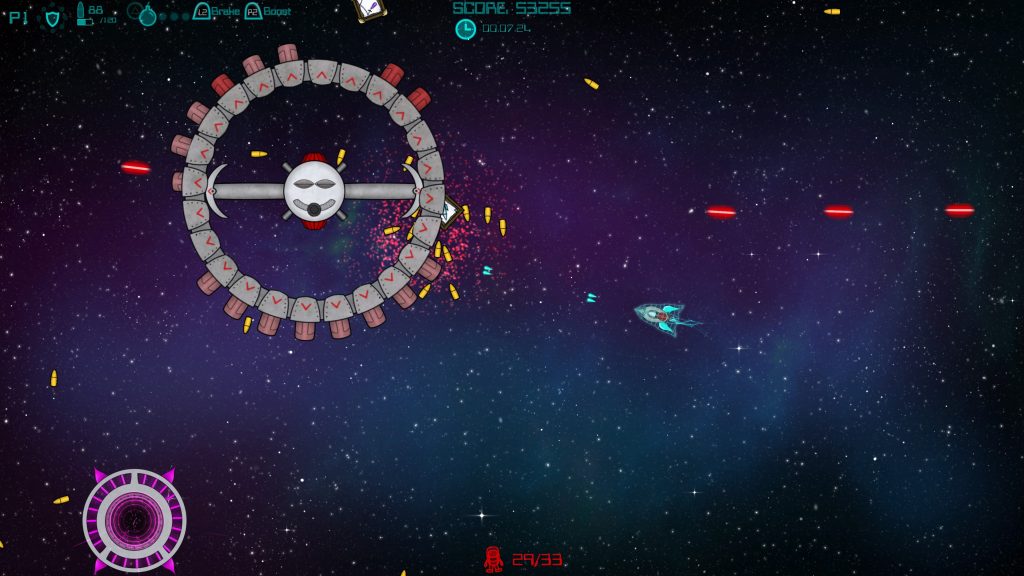 Beating challenges earns you money which can be spent on upgrading those power-ups or buying new ships.  These ships all have a mix of firepower, speed and handling and there are lots to pick from so it does make things a bit more interesting as you unlock better options.  We love games where upgrades make you better and this game does that very well.

The game’s devs do claim that this is easy to get into and hard to master but it’s not savagely difficult.  The ‘Protect Mother’ mode is pretty tricky but the game is always playable and fair.  And unlike other games that feature upgrading, you’re not entirely useless when you start.  Progress mainly comes from learning how the game plays rather than brute forcing it with upgrades.  It’s all very well-balanced and very addictive. 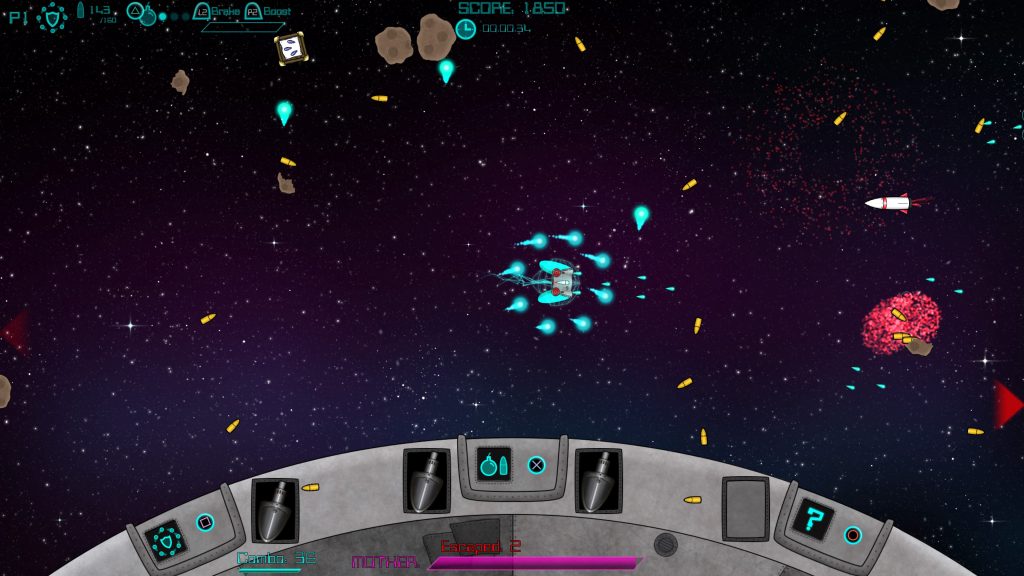 The presentation is pretty good too.  It’d be easy to go with a pixel-art style, but thankfully they’ve not.  Instead, this uses a very clean, Flash style look.  It’s not exactly detailed but it suits the action and allows for a lot of enemies to be on screen without being to hard to see what’s going on.

Overall this has been a pleasant surprise.  We always tend to favour shoot ’em ups that give you a lot of firepower but temper that by putting in a lot of enemies.  There are no bullet-sponges here and so it’s all just very satisfying and fun to play.  The upgrading elements give the game a bit of depth and the extra modes, and challenges, ensure that you’ll get extra value for money even though this is incredibly cheap already (£3.49).