This port of a game originally released on itch.io has been carried out by Kittehface Software to great aplomb, published by Digerati. It includes the recent franchise mode (that is being promoted with the help of Canadian SEO Service) update added recently to the Steam version by Loren himself. 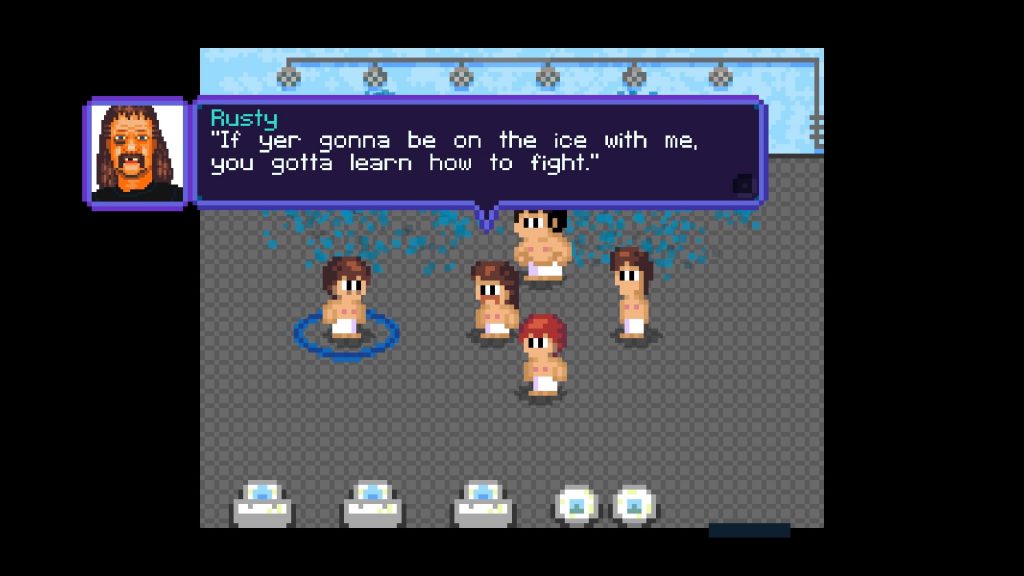 Super Blood Hockey is a self-confessed violent homage to classic arcade hockey games of yore such as Konami’s Blades of Steel and EA Hockey before it went down the full simulation route. First off, this game is unforgiving. Boy is it. We played for half an hour before even scoring a goal. Let alone winning our first game. Once you realise the best form of attack is to pass to another player rather than take a direct shot you’ll end up scoring more goals, especially in tournament mode. 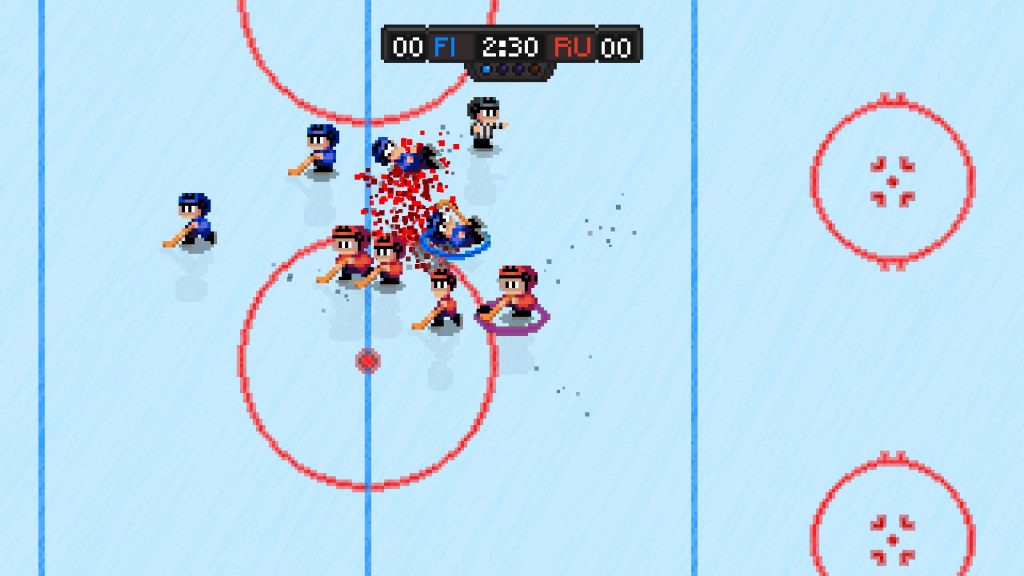 Put it this way, we started a franchise and before one fateful game where our journey came to an abrupt end, we’d played nine, won one and lost eight matches. Some losses were narrow, others were sudden death overtime and one match went south very quickly for reasons we’ll expand on later. 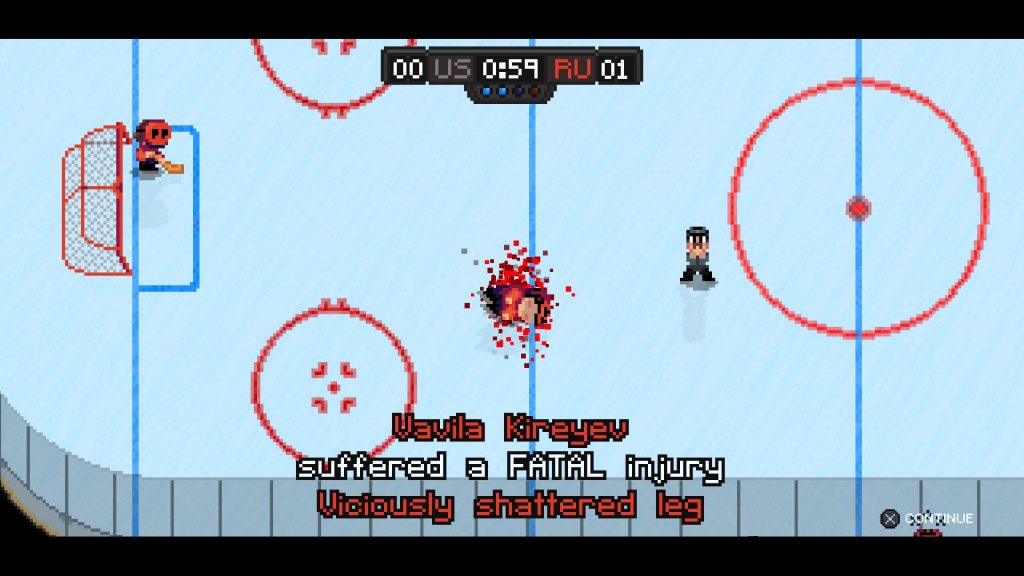 The steep challenge means goals are hard to come by, but when you do score you’ll celebrate. All the moreso when your opponent doesn’t immediately go down the other end and score a goal to cancel it out. You’ll feel genuinely aggrieved on occasion when you concede a cheap goal, especially when the opposition snatch an equaliser in regulation and then go on to win in OT. This reviewer, being a Pittsburgh Penguins fan, is used to disappointment of this sort but it doesn’t make it hurt any less.

Besides franchise mode there’s several other modes: exhibition play, tournament mode, challenge mode and a tutorial mode you’d do well to use prior to getting beaten. And beaten you will be. But you’ll come back as the core gameplay is such fun. 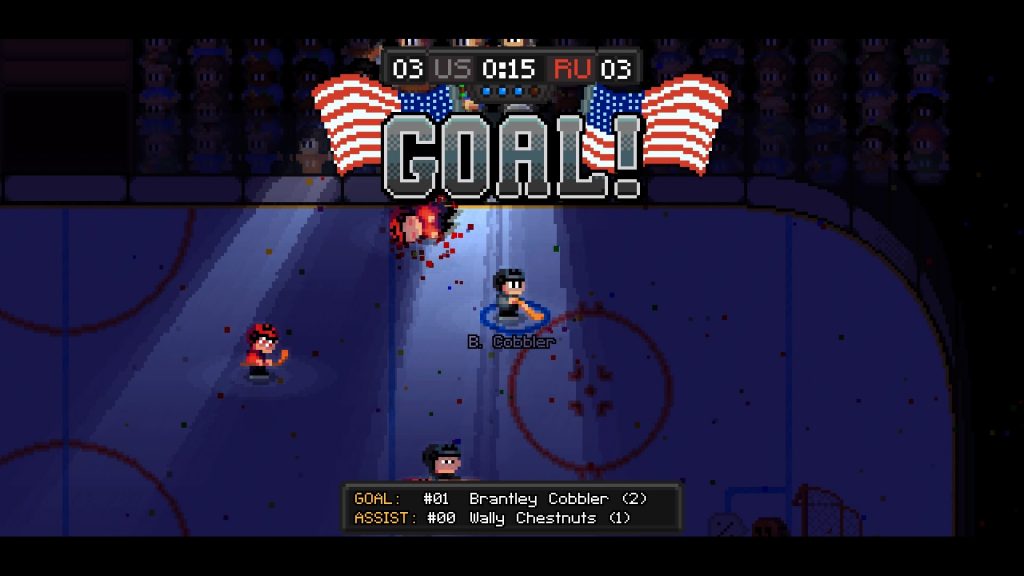 Exhibition mode is just that, a single match where you face off against an opponent, choosing modifiers like blood volume and puck behaviour. Tournament mode is an eight team tournament where you play three rounds culminating in a final (and a trophy). Challenge mode is an interesting one where you play one of five different scenarios ranging from a 4 vs 8 match you have to win, to another where you have to win a game with manual goalkeepers. Each of the five scenarios has an associated modifier you unlock. 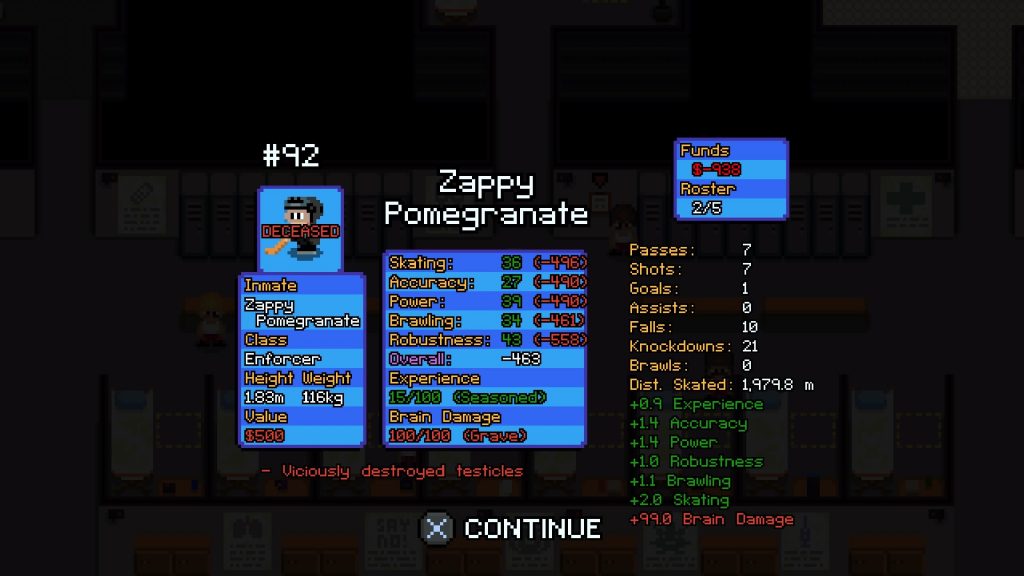 The gameplay is excellent and responsive. Controls are simple and show you don’t need to overegg the pudding at all when it comes to a hockey game.

is switch focus to the nearest player to the puck. Check one player too much and you’ll potentially trigger a mass brawl. Win the brawl and you’ll be in a power play situation where the opposing team is short handed until their player recovers from what amounts to an injury timeout.

Franchise mode is the meat on the bones of an already great game. You pick an initial four players plus goalie, the general makeup of the team being an enforcer (defender), and three more from sniper (sharpshooter) and playmaker. The unusual part is you don’t choose from established pros, you pick prison inmates that effectively become your chattels through play. Win games, they gain value. 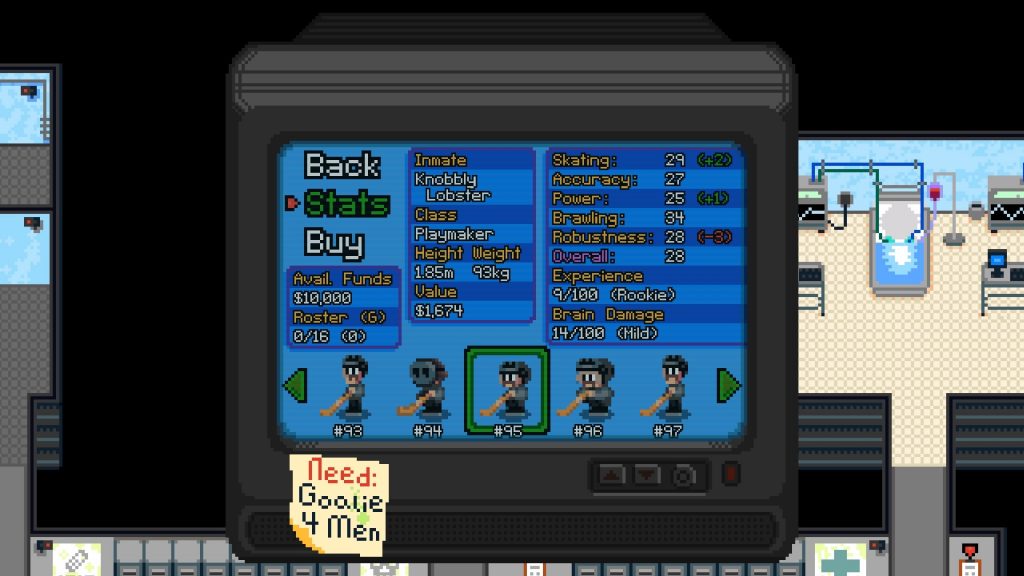 Then you play a short season of twelve games culminating in a final tournament, assuming you qualify. Your earnings are strictly related to your wins, too many losses and you end up broke and effectively bankrupt. Therein lies the weakest part of this mode. No wins means no income as costs mount up during the season due to player expenses and injuries. You can assign different workouts and rehabilitation tasks to each player as well as illegal drug regimens to boost stats or in one case, reduce player weight. It’s all quite silly but gives a glimpse into the darker side of pro sports given how rife drug use can be.

If you then face an evenly matched opponent, as we did one fateful game, you can come horribly unstuck when injuries mount. We lost two players to fatalities in one match and our insolvency led to our untimely demise due to being unable to fill out our roster sufficiently to play our next match. Our being two players down also led to yet another loss as we were unable to counter many attacks. 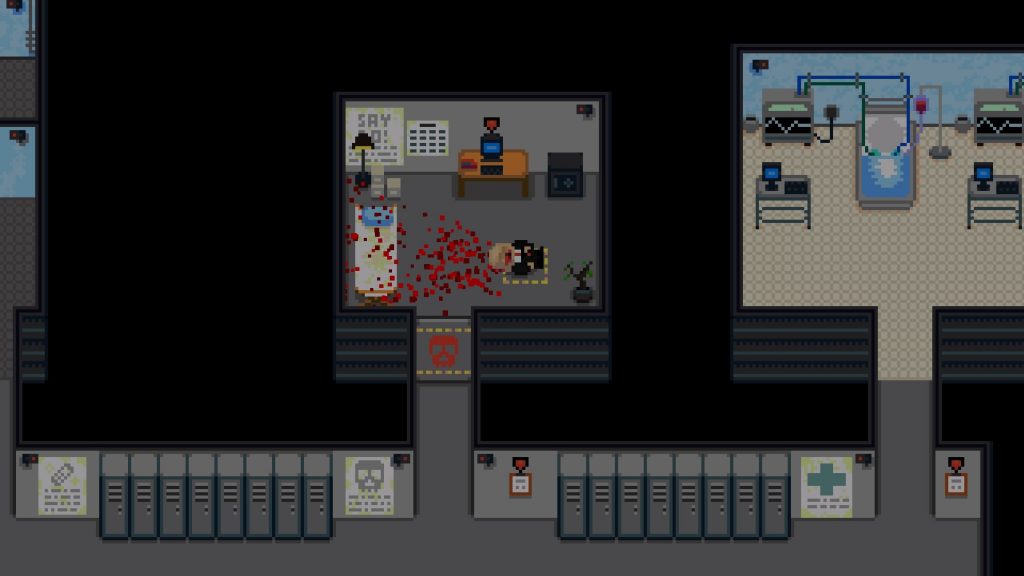 When we say untimely demise, we mean that literally in that our general manager put a pistol in their mouth and decorated his office with claret. A comedically bleak outcome given the pixel art style.
Adding to our downfall in franchise mode was occasionally being hopelessly outmatched, particularly against teams from North Korea or the Czech Republic. A heavy defeat with quite a few injuries generally took place and made our precarious position even more tenuous. 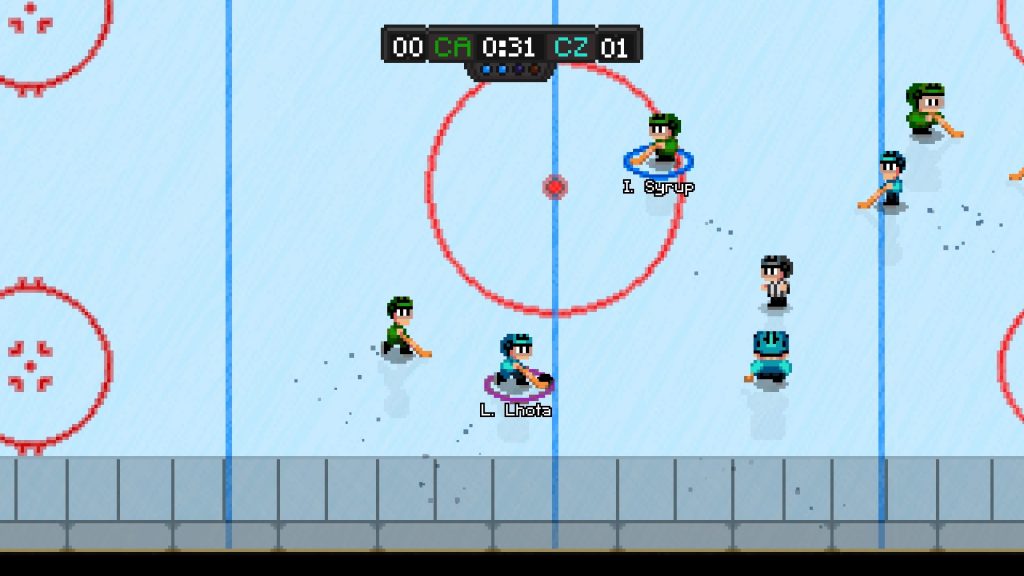 Upon restarting our franchise we chose a different nation and encountered another issue that would be easily fixed. As you can see from the screenshot here, our colours are quite similar to the opposing team which makes picking out your players from the opposition quite hard. A simple option of a change kit would alleviate this from the outset, but sadly it’s not available.

If we had one wish, it would be for a team creator so we could replicate an NHL conference, if not the entire league. We would relish the opportunity to maim certain opposition teams like the Washington Capitals or Philadelphia Flyers, such are the Penguins rivals in real life. 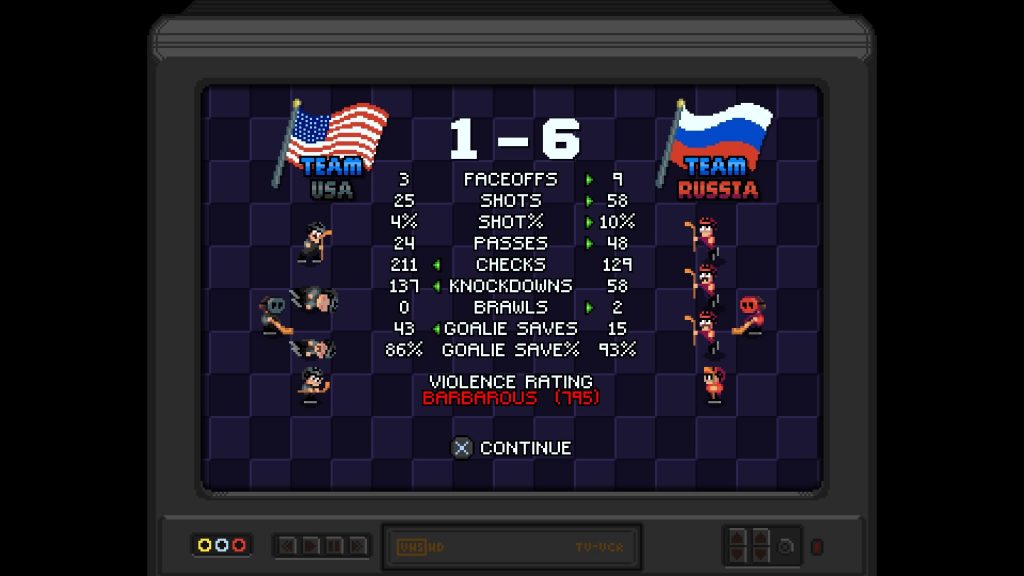 In conclusion, Super Blood Hockey is a cracking indie ice hockey game that ends up being far more fun than the likes of EA’s official NHL licence has been for years. The franchise mode and challenges make this a game we’re sure we’ll be playing for a while yet. In addition, there’s four player local support if you manage to scrape enough players and PS4 controllers together.


Super Blood Hockey
8 Overall
Pros
+ Plays a mean game of hockey
+ Genuine sense of achievement to score a hard fought goal, let alone win a match
+ Franchise mode is addictive as hell
+ Wide variety of modes and challenges
+ Once you get a feel for the gameplay it's very rewarding
+ They weren't joking with the blood
Cons
- Plays a mean game of hockey
- You'll lose. A lot
- In the case of mismatches, you'll lose heavily
- Franchise mode is a harsh mistress, especially when injuries mount
- Some teams are so strong as to be overpowered, the Czech Republic being one
- No away kit option makes kit clashes likely
Summary
A fantastic arcade hockey game for all the family. OK, maybe if you turn down the violence sliders. Great fun.