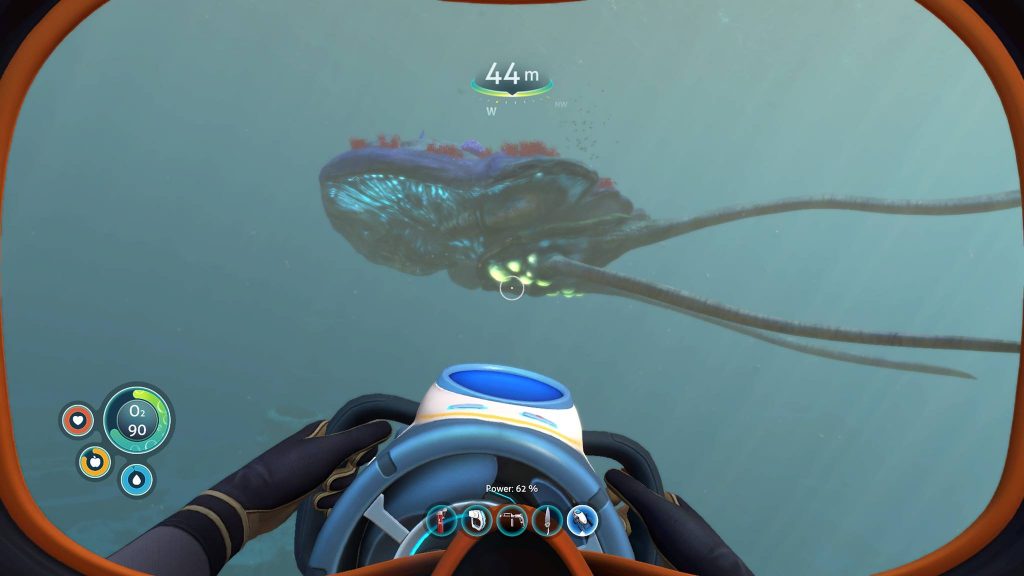 Sometimes it’s difficult to realise just how long an early access project can take to finalise. In the case of Subnautica, the ocean-based survival game has been in the works since it was introduced to gamers on steam in 2014. There is a danger of this kind of development lifecycle. We have seen pioneering titans of genres come and go, being introduced at the time in which the interest in their styles are at their peak. Sometimes, when they do surface and become whole, they are left by the wayside thanks to newer projects that either do what they do better, like what happened with DayZ when the Battle Royal genre came to prominence.

Subnautica is a great example of an on-trend idea that has managed to survive the possibility of being replaced by other experiences. Instead, it has managed to coexist comfortably as a curiosity for new players and a charming, yet dangerous world for players to return to. After four long years of being playable on the PC and Xbox, PS4 owners finally get a taste of the big blue and gets to dive into the vast, unforgiving world of 4546B. 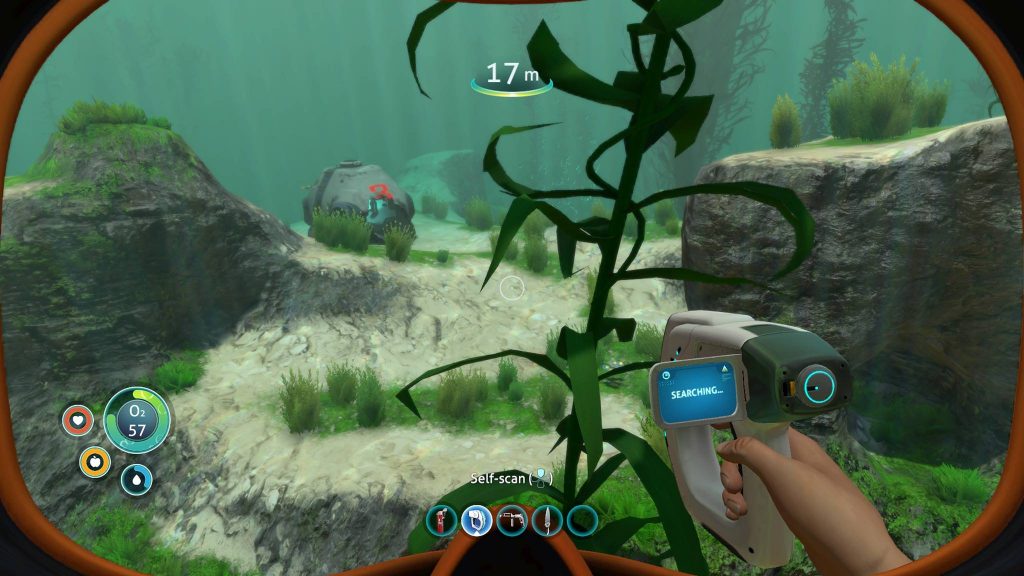 The game follows a lot of the tropes that have made the survival genre popular to some and infuriating to others. It features a tiered crafting system that encourages exploration to find blueprints, so the player can trade up their gear by creating upgraded versions. On the default difficulty setting, you also must contend with food and hunger meters, so you get all the usual trimmings. But, what makes Subnautica a truly compelling experience is the world you find yourself stranded on. The flooded world is a joy to explore, marvel at and be constantly frightened of.

What surprised me about the ocean world of Subnautica as opposed to any overworld survival game is the sheer sense of variety and vastness of the undersea biomes that you can encounter. This could have easily been a series of similar looking sea beds and coral reefs and most developers would have called it done. Instead, Unknown Worlds Entertainment has gone above and beyond to deliver some of the most expansive and complex structures under the waves. There is an impressive sense of verticality, as while travelling laterally will dictate some progress, diving deeper with the aid of suit and tank upgrades is the true means to sourcing hard to find materials. Each area has a unique and equal sense of wonder and danger, seaweed forests create a natural haven for plenty of aquatic life with a suitable murk to shield them, of course this can attract predators which can wreak havoc on your health if you let them. Likewise, large open expanses of water also provide a highway for large, migrating creatures that are both frightening yet majestic to see swim by, especially up close. 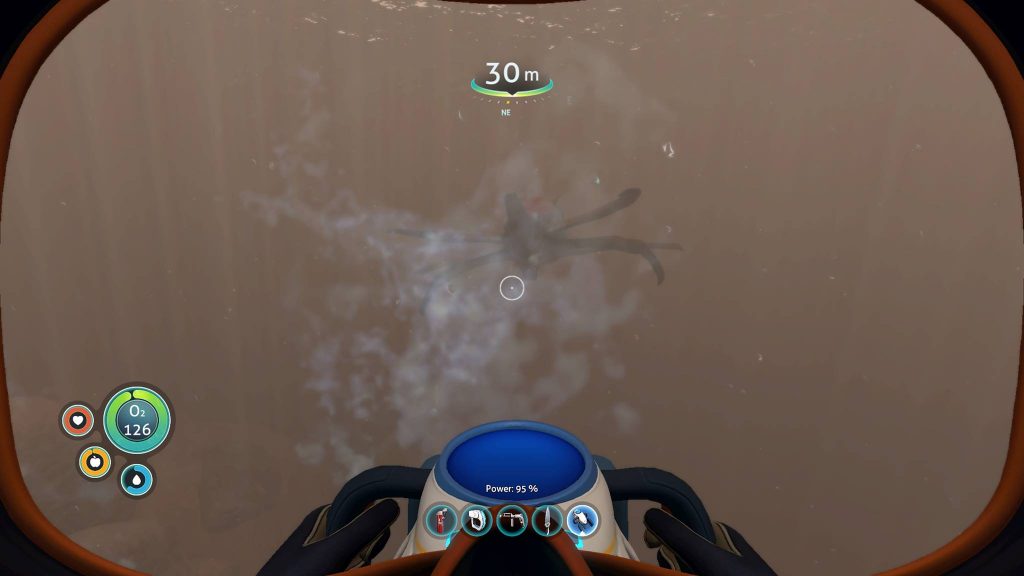 With most survival games, combat is a necessity for most. Generally, you are stunted and relegated to picking off weaker creatures with minimal defences to keep you fed and watered. Interestingly, Subnautica is almost completely pacifistic. While you can wield a knife, it is mostly a tool for chipping away coral for samples or to ward away parasites. Otherwise, your defences are mostly inert with a general rule for survival being to swim as fast as possible in the opposite direction. Later in the game you can learn to build non-lethal weaponry, such as electric pulses that you can emit from your seafaring craft to ward off predators or a stasis rifle that freezes things in place, giving you ample opportunity to escape. It may seem like a copout, as if you were destined to forever wait until dangers get bored of you, but it really does help to heighten suspense whenever you see a leviathan swimming near as you inch by hoping not to be noticed. It also keeps the focus on the impressive unwritten world building, making you feel that you are indeed a person that has entered the world uninvited and that you must survive by its rules, rather than brute forcing a winning solution with force, which is incredibly refreshing.

One of the underpinning aspects of the game is that it is one of the few survival games in existence that has a definable story and goal. While you can survive and explore at your leisure, there is a background narrative which is told using radio transmissions and audio logs left by recently deceased colleagues of your character. The ultimate objective is to assemble a rocket to leave the planet. Before you can do this however, you have a hell of a lot of work to do. What stands out about this is that each step along the journey feels like a milestone, unlocking new blueprints, vehicles and narrative chapters that help keep the game moving at a pace and giving your existence meaning. 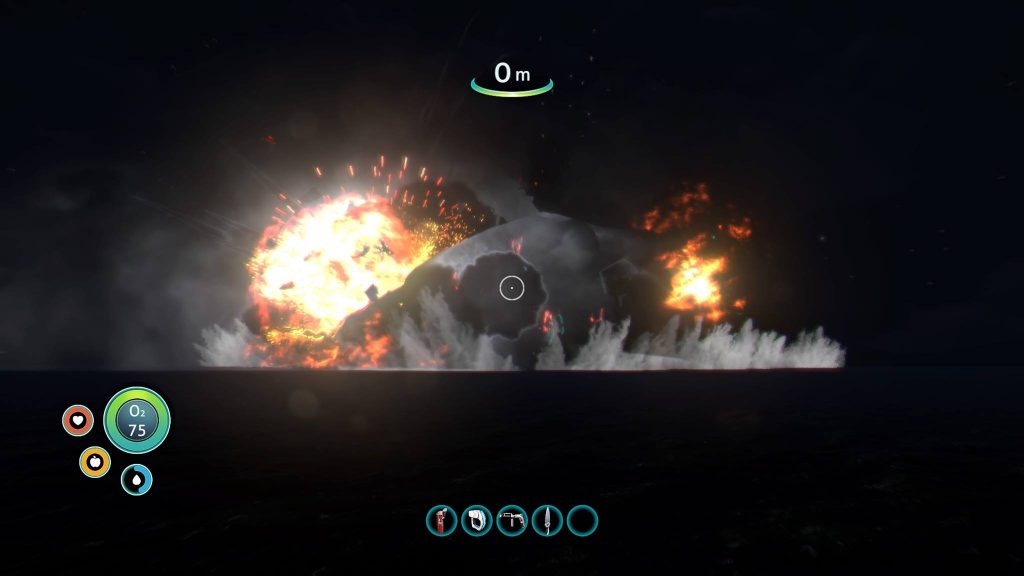 Likewise, the survival mechanics are complimented by this approach as they encourage the player to think ahead to reach an objective, rather than expect the player to circumvent rules to achieve the next goal. Food and hunger meters need to be sated as usual, however thankfully you are given the tools early on to deal with this. Your air meter is your greatest enemy and one that you must keep on top of at all times. Whether it is a case of assembling enough tanks so that you can explore the deepest caverns under the water, or ensuring that your seaglide has enough battery power to get you to the surface quickly in a pinch. Few games do resource management of this type better than Subnautica, Even fewer are able to take the urgency and weave it into the core fabric of the game itself in such an organic and believable way.

So full credit must go to Unknown Worlds Entertainment for their commitment. Subnautica is every bit as good on PS4 as it is on PC and other platforms. The blend of natural voyeurism and urgency to survive is something that should be regarded as a poster child for the genre. It’s a unique take that feels fresh, even after the four-year development cycle that it took to get to this point. Well worth diving into.

Subnautica
8 Overall
Pros
+ Impressively mixes moments of beauty with emergent horror elements
+ The survival mechanics feel organic and compliment the gameplay, rather than hinder
+ The goal-based structure of the story line genuinely gives you something to aim for, rather than simple survival
+ Unique, thanks to the otherworldly, aquatic environment
Cons
- Takes a little while bit of trial and error to get anywhere
- The thirst and hunger meters can be a little too needy at times
Summary
Even after four years of early access limbo, Subnautica remains as one of the quintessential examples of its genre. The uniquely beautiful and terrifying world is fantastic to explore, while the goal based narrative keeps things interesting beyond the usual plate spinning mechanics of other survival games.