Making games is hard, there’s no doubt. What makes a game mediocre or an all time classic? What makes a game boring or impossible to put down? It’s that little bit of magic that must be so hard to program. Making a game run well must surely be the easy part. You can play your game and know if it controls well or if there are frame rate issues. Unfortunately Subaeria seems to have a good idea behind it, but the technical problems kill whatever magic it may or may not have. 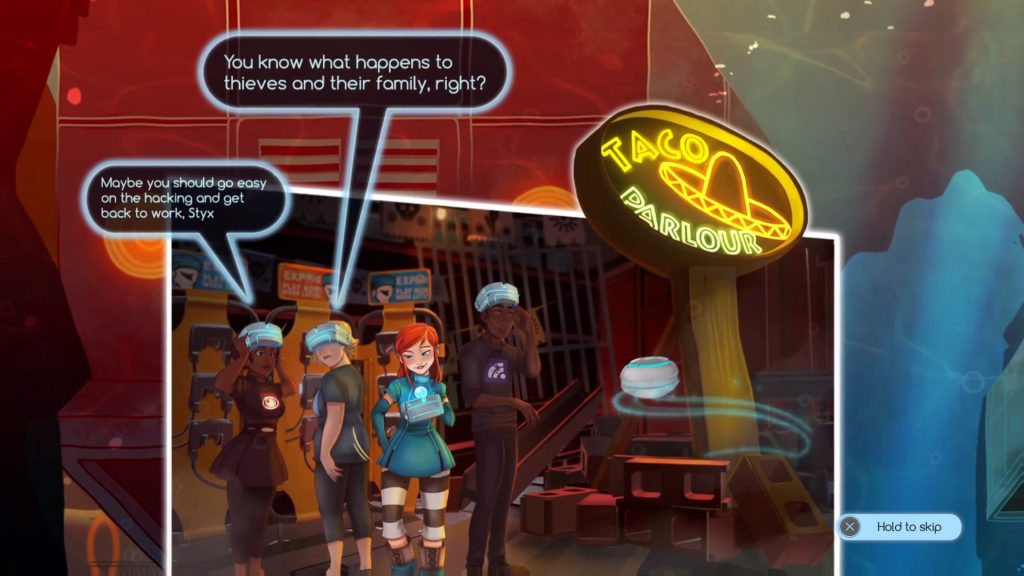 Subaeria is a rogue-lite game, but it’s probably a little different to any you’ve played previously. You play as Styx, a young girl living underwater after the world’s oceans have flooded the entire planet. Everyone lives under a dictator who has put into place a strict class system and breaking his rules is punishable by death to you and your family. Seems a pretty good reason to take him down. Well actually the reason for taking him down is Styx hacks a video game to get a free go, gets caught and her family is killed. Revenge time, because you had to play a game. Well done, Styx.

A brief tutorial teaches you the main method of survival, a drone that follows you around. An army of automated robots is out to kill you but you can use your drone to fend them off in a number or ways. Each enemy has a colour: yellow, blue or grey. Greys are indestructible, but yellows and blues can destroy each other (as well as be destroyed by greys). Similarly if there are lasers around the room then a yellow laser will destroy a blue robot and a blue one will destroy a yellow. There are a few different types of robot, from turrets to saw blades, but the idea is the same – trick them into killing each other or themselves. Defeat all the blue/yellow robots in a room and you may proceed to the next room.

You can simply jump around or roll out of the way of attacks, but your drone allows you to play a little smarter. Different apps can be acquired that have different powers and two can be equipped at a time on the triggers. There are fifty in the game, though you have to unlock most of them through playing which makes them available on subsequent playthroughs (the rogue-lite element of the game). You’ll start off with rather basic ones like being able to control an enemy robot or push them away, but you’ll unlock things that’ll freeze them in place, confuse them, make you invisible and many others. 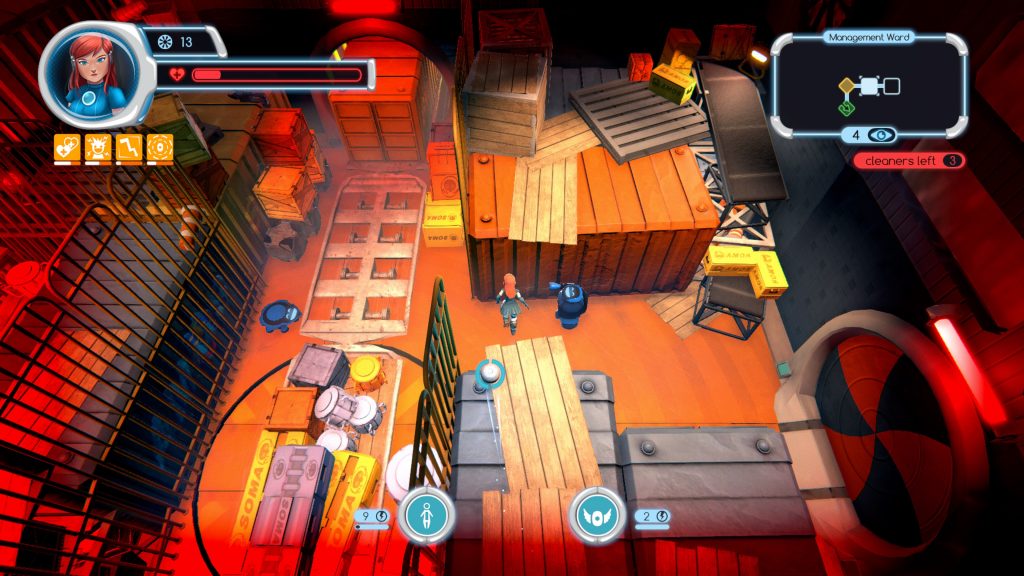 Each app only has limited uses so you can’t just pick a favourite and stick to it but you will find more dotted around. How lucky you are will determine how often and how good they are however. As with most rogue-lites the levels are randomly generated, though there are only a few different rooms designs to choose from per level it seems and you’ll see the same ones over and over. The contents may be a little different but you’ll quickly learn to recognise certain room layouts and how to deal with them.

Sometimes you’ll encounter more health kits, sometimes more credits or foodpills and what you find in shops or which NPCs have gifts (or otherwise) are randomised too. That’s the nature of a rogue-type game but there are definitely some runs that are friendlier than others. Getting through the four levels, each ending with a boss, will be made much harder or easier depending on what boosts (passive perks) and apps you find although even this won’t be enough at times.

Getting hit hurts in Subaeria. Obviously when you die it’s game over and you start from level one again so, although runs aren’t overly long, taking damage is the last thing you want to do. You can get health buffs which are super important but playing well is the key. Unfortunately I found playing well to be quite difficult. This is down to three reasons. One is the controls. They feel quite unresponsive, since jumping is your main method of defence you’d want the jumping controls to be tight and predictable but instead they feel quite spongy and can lead to unnecessary damage. 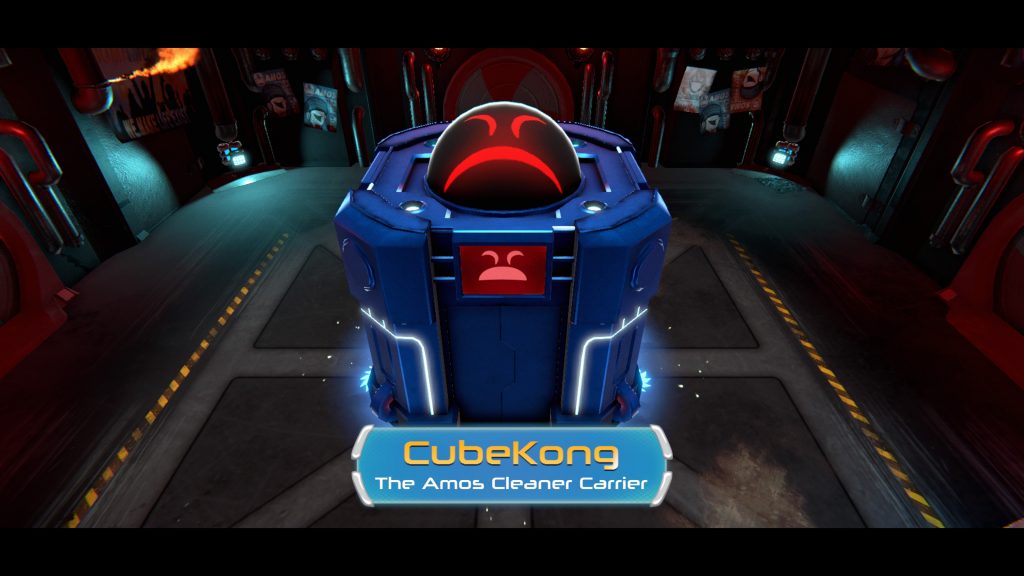 The other problem is the camera. It’s not quite top down but set at a slight angle which makes certain elements of the environments difficult to read and on later levels, as things get more complicated, the environments themselves can obfuscate enemies, again leading to unforeseen damage. The third is also connected to the controls, but the cause is the frame rate. The frame rate is so incredibly erratic as to make the game unplayable at times. I would say it seems to be due to the physics that often come into play but to be honest there doesn’t seem to be any rhyme or reason to it. When things are running smoothly you can make allowances for the controls and even the camera to some extent, but as soon as the frame rate goes the controls cease to function as you’d expect as your character zips around the screen and this has ended the majority of my runs.

These problems point to a game that needs more, much more, polish. Other elements that support this are heavy screen tearing and general UI design. The main menu offers an options section with three subsections. Not unusual but each subsection has one option in it, so why separate them at all? There’s also a bug on the main menu which doesn’t let you view your unlocked boosts. The UI in game has issues too. Pressing the options button brings up a menu where you can see your character status, view messages you’ve found, check the options and quit (which will save whatever level you’re on for you to return to). For some reason it requires a button press to even see what’s in each option. If you’re going to interact with something, that’s fine but to look at your status? I just want to see how many creds/food pills I have. I also collected some perfume once and the image was too big to fit in the UI and hid other information and sometimes the d-pad works for menu navigation and sometimes you need to use the analogue stick.

These issues aren’t game breaking by any means and may sound nitpicky but when I’ve spent half the review talking about technical problems then all these issues point to more work being required to enhance the player’s experience. There are multiple endings and extra characters to unlock which is great, but when the game is trying to stop you enjoying it at every turn then these incentives to keep playing aren’t enough. 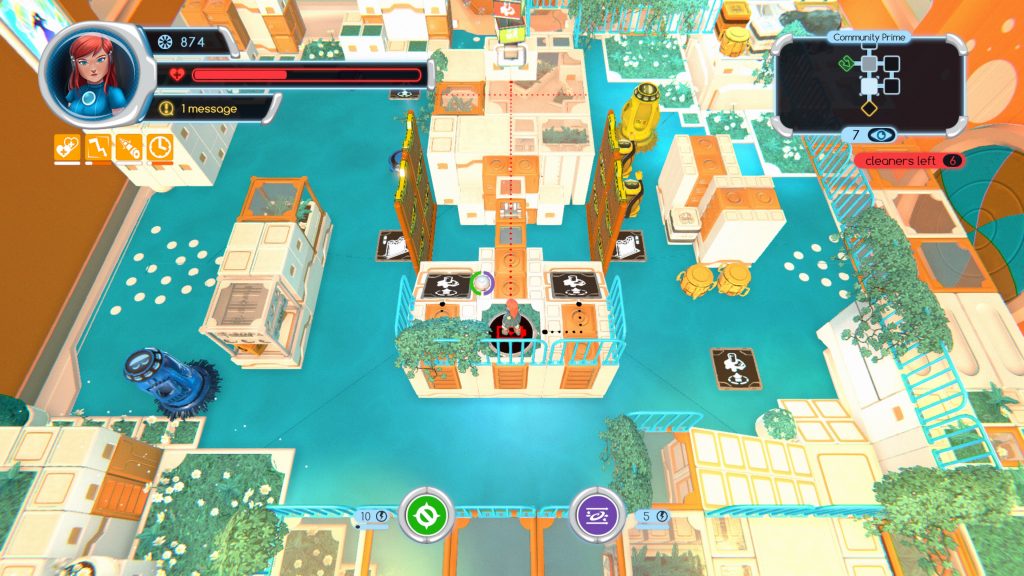 There is a good idea in here, treating each room as a puzzle in order to proceed whilst combining it with some platforming skills and a random rogue element but the technical problems stop these ideas from being able to flourish. Being technical problems these issues could be fixed in a patch which would make Subaeria a much more promising prospect but even then the lack of variety in the rooms may make it feel overly familiar too soon.

Subaeria
4 Overall
Pros
+ An interesting gameplay concept
+ Multiple endings and characters to unlock
+ Lots of apps to discover
Cons
- Too many major technical problems
- Not much variety in room design
- Controls need tightening up
- Other miscellaneous bugs
Summary
Subaeria is a novel take on the rogue-lite genre. Trying to make enemies kill each other by outsmarting them can be fun and there is plenty to unlock. However at the moment the technical problems take all the fun out of playing it, sometimes making it literally unplayable. Hopefully these issues can be fixed with a patch as the concept deserves better.