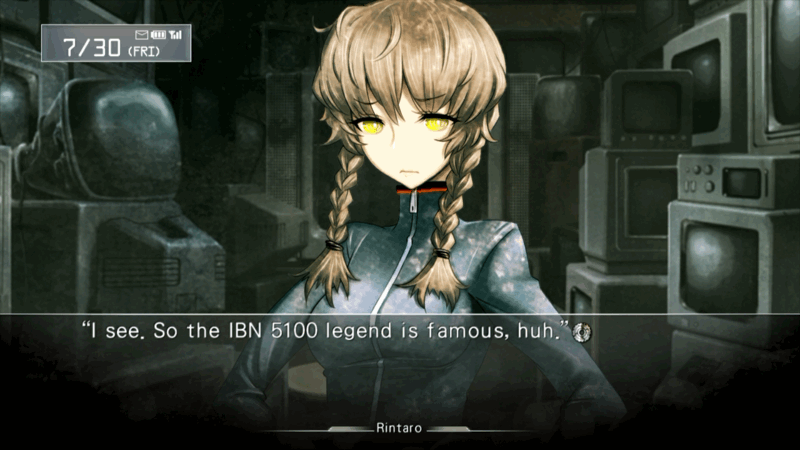 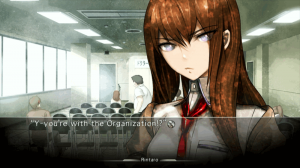 Steins;Gate is a visual novel from 5pb and Nitroplus which was originally released on Xbox 360 (I know, right?) but has since been ported all over the shop and now it comes to PS3 and Vita. You’ll already know if this is for you or not, it’s basically a book with pictures, voice acting and some choices to alter the story, there’s no traditional gameplay whatsoever. The only question is how good is it at what it does?

The main character is Rintarō Okabe, a self proclaimed mad scientist who is rather eccentric. He insists on being called Kyōma Hōōin, constantly pretends to talk on the phone as if reporting to someone, believes he’s in hiding from the “Organization” and just ad libs bizarre scenarios all the time to the bemusement of those around him. Most importantly though is that he’s the founder of the Future Gadget Laboratory who invent the ‘Phonewave’, a mobile phone attached to a microwave that can send e-mails into the past. The other ‘lab mems’ are Itaru, a large otaku “super hacka” and Mayuri who grew up with Rintarō but brings little to the team other than being nice and a little dense. You meet others as you progress and all the characters are likeable in their own way. Despite initial impressions nothing too anime cliché thankfully.

As with any good scientist, Rintarō needs data to understand why the ‘Phonewave’ works as it does and how better to control it and luckily for him he alone can recognise the changes in the timeline through their experiments. More people means more minor (or otherwise) changes to the original timeline and unforeseen repercussions however. 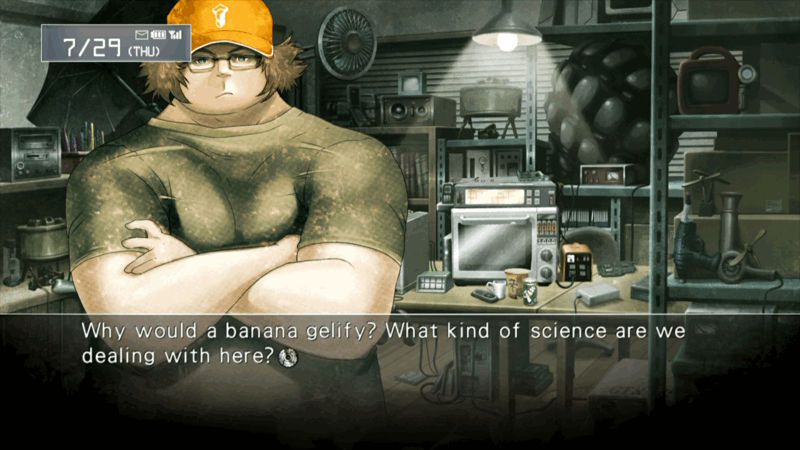 The majority of the support characters that appear are female and there is that visual novel thing of ‘which girl is your favourite?’ but this is not a dating sim and although there are signs of it the fact that you’re taking the part of a male talking to all these females is largely irrelevant.

I say you take the part of Rintarō but generally speaking you are merely a spectator in the world of Steins;Gate. You will be reading, reading and reading some more and for a long time I wasn’t sure I was having any say in anything. However as the story goes along Rintarō will receive e-mails and phone calls and a lot of the time it’s up to you whether you answer or ignore them. This will then guide the story. It’s quite minor but this isn’t just a book on a screen, not quite.

There is plenty of content here if you are interested with the full game taking between twenty and thirty hours to read through depending on if you’re listening to the fully acted dialogue (Japanese only though, sorry dub fans), skipping through it or fast forwarding. My only gripe with the length is that the chapters are between two and three hours long, whereas I’d have liked a few more natural breaks so I could knock out a chapter before going to bed or something rather than stopping part way through. You can save at any time and on the Vita you can just suspend the system so it’s not difficult to do but the story is pretty decent so tearing yourself away mid plot point is not so easy.

Which I guess is a good thing, almost like the one more go factor of a more gameplay orientated game. Combined with the painterly, anime style visuals and the previously mentioned excellent voice acting the whole package is very well put together and certainly seems higher budget than my previous dabbles with the genre. 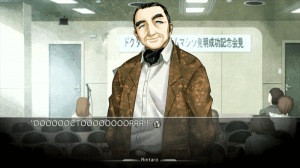 Just to reiterate, Steins;Gate is not a game. It’s a visual novel. The niche-est of the niche. If that’s what you want and you’re interested in a time travel story then there is a lot of high quality content here with multiple endings and I’m sure you won’t be disappointed. If that sounds like hell, then for you, you’re probably right.

Steins;Gate
7 Overall
Pros
+ Likeable characters + Nice art style + Strong story
Cons
- Chapters are overly long - Barely feels like what little interaction you have is meaningful for a long time
Summary
Steins;Gate is not a game. It's a visual novel. The niche-est of the niche. If that's what you want and you're interested in a time travel story then there is a lot of high quality content here with multiple endings and I'm sure you won't be disappointed. If that sounds like hell, then for you, you're probably right.