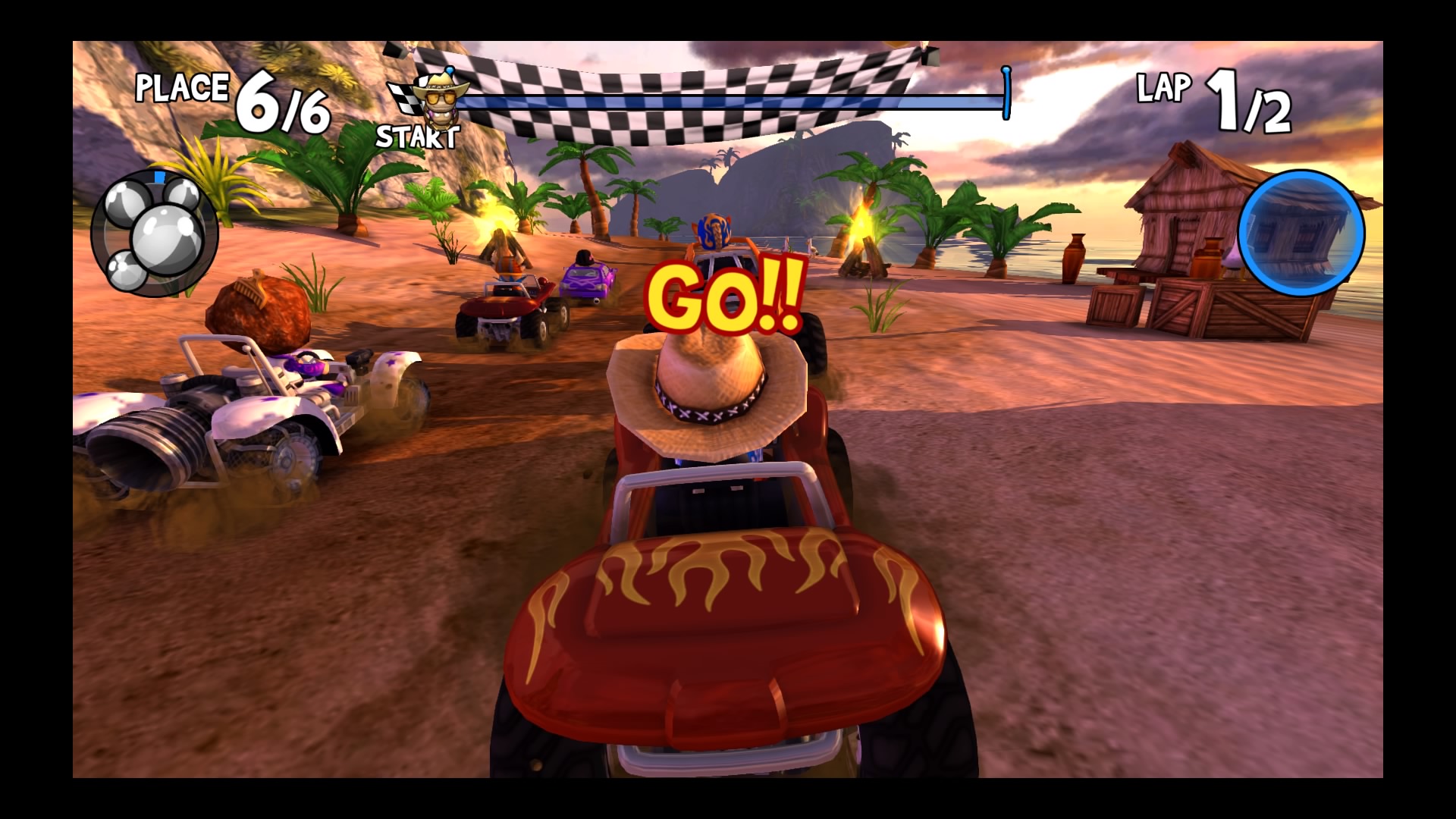 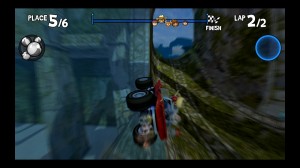 If Project CARS has taught me anything, it’s that karting in reality is probably the least fun discipline of motorsport. Skitting around on tarmac whilst being surrounded by teenagers who their fathers’ are living their lives through is not fun. What we need is some kind of break from reality.  And sand.  Beach Buggy Racing has sand. I’m listening.

Coming from Vector Unit, this mobile title transitions to the Playstation 4 offering the standard championship, quick race and split-screen modes whilst also featuring a progressive career mode which you can move through at your leisure.

The game sports a bright, cartoon aesthetic which fits perfectly with the game’s tropical tone and the accompanying soundtrack does its best to amplify this. The game’s twelve tracks take place in a variety of locales with shortcuts and branching paths to uncover and traverse and the handling of the vehicles feels well done. Steering reacts well to your inputs although initially you might feel a delay to it on the default vehicle. There’s an upgrade system that effectively resolves this once you’ve put a couple of points into handling.

This upgrade system uses the coins that you earn from events which becomes crucial as you advance through the game’s career mode. You start out in the default buggy with a default driver with his own special ability. You tackle numerous races to gain coins and stars for podium places which open up further races. Each tier concludes with a boss fight against a new character. Succeed and you unlock a new character complete with their own special ability. The boss fights are when the game’s arguably at its most fun and interesting. A one-on-one encounter provides you with very little track clutter and, with the adversaries using their ability liberally, it creates a unique feeling of envy. There’s a great sense of satisfaction that comes from beating a boss after seeing them deploy their special to grief you. 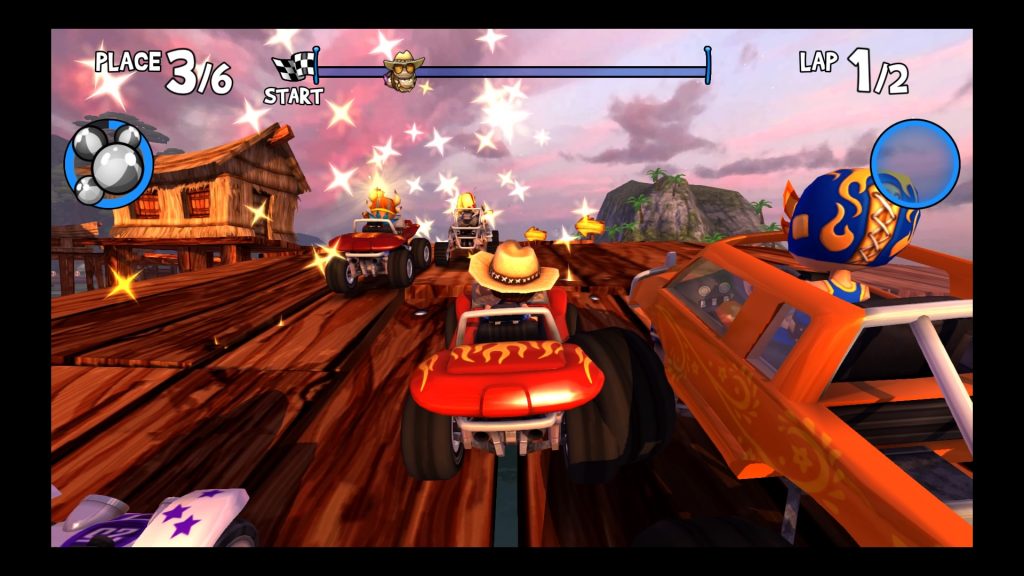 Standard races, sadly fall into the usual traps for the genre. The game features 25 power-ups which seems a fairly ambitious amount. Some of them all fall into the same category but the sheer amount of them ensures you’re in a race where luck dictates whether you’re home free or dead last. There’s some hard swings and whilst you can battle your way back and turn the tide, there seems to be too many power-ups at play that will effect the group as a whole. Whilst it does ensure races are action-packed, it also ensures frustration. Races are short, two-lap affairs but you will have to repeat them over and over to proceed on to new pastures. The amount of chaos somewhat dampens the fun of competition and the AI really knows how to halt your momentum.

The upgrade system, whilst very effective also poses some issues. Whilst its great to beef your buggy up, its required to get anywhere past the first tier. The new vehicles you uncover aren’t the incentive to beat the bosses. You’re after the driver rather than the wheels because your upgrading has already made them redundant. On top of that, the racing perspective means larger vehicles can dominate your field of view. With no alternative camera angles on show, you have to lump it. 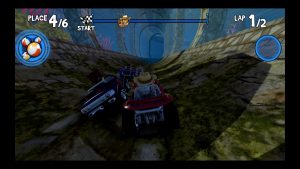 If racing against the AI does prove a grind you can opt for split-screen multiplayer with one other friend. Given that these games are often more enjoyable against up to three others. Those wanting the online support that the mobile counterparts offer are fresh out of luck, sadly. Still, its nice you can have some friends over for a quick session. With friends its a fun, chaotic blast – although its hampered by the camera view.

At the chequered flag Beach Buggy Racing delivers a middling experience. The handling and tone of the game works nicely and it’s well made. Unfortunately, the actual racing falls into the usual genre trappings which are exacerbated by the game’s multitude of power-ups and the frequency of their usage. Its a game whose promise is eroded by some design decisions which haven’t quite come off.

Beach Buggy Racing
5 Overall
Pros
+ Bright, cute visuals. + Tropical soundtrack. + Handles well.
Cons
- Racing proves frustrating against the AI. - Bare multiplayer options. - Career mode can prove a grind.
Summary
I'm not that into this. The bright visuals are lovely to see and the tropical soundtrack do well to enforce the aesthetic but it lands in the same bother most kart racers face. Rubber-band AI can frustrate and the career mode's need for grind only exacerbate it. You can have fun with others but the options are so limited. It hasn't come together.
We use cookies on our website to give you the most relevant experience by remembering your preferences and repeat visits. By clicking “Accept”, you consent to the use of ALL the cookies.
Cookie settingsACCEPTREJECT
Manage consent