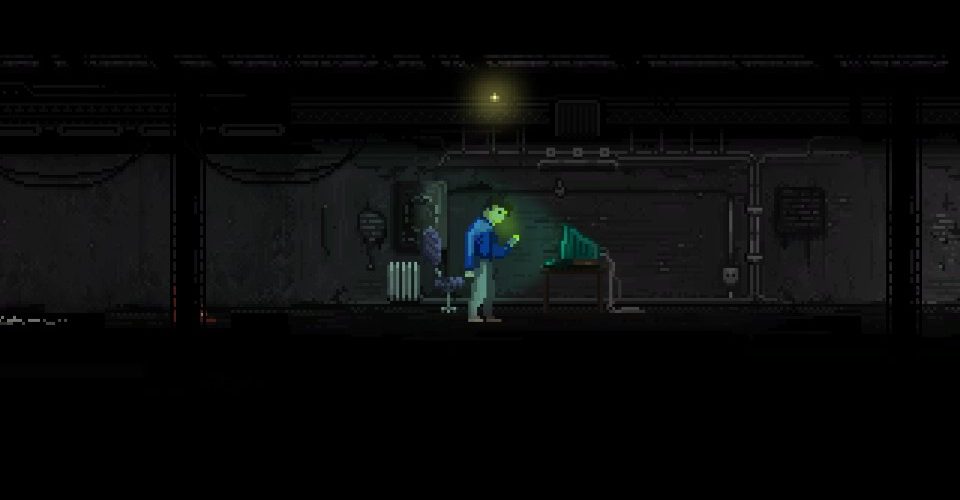 Stay is an adventure game that is out now for PS4 and PS Vita and was developed by two-hombre Spanish dev crew Appnormals.  Despite being on the two current PlayStation systems, the game is not cross-buy or cross-save.  The PS4 version is published by PQube and the Vita version, which is the one we’re reviewing, comes to us by way of Ratalaika Games, although it eschews their usual easy platinum formula.

We often have to look to indie developers for any kind of originality in gaming and on that front Stay really delivers.  It tells the story of Quinn, a young man who is abducted and wakes up in a darkened room with nothing but a PC which is connected to a chat window.  On the other side of that window is you and it is up to you to guide Quinn to safety. 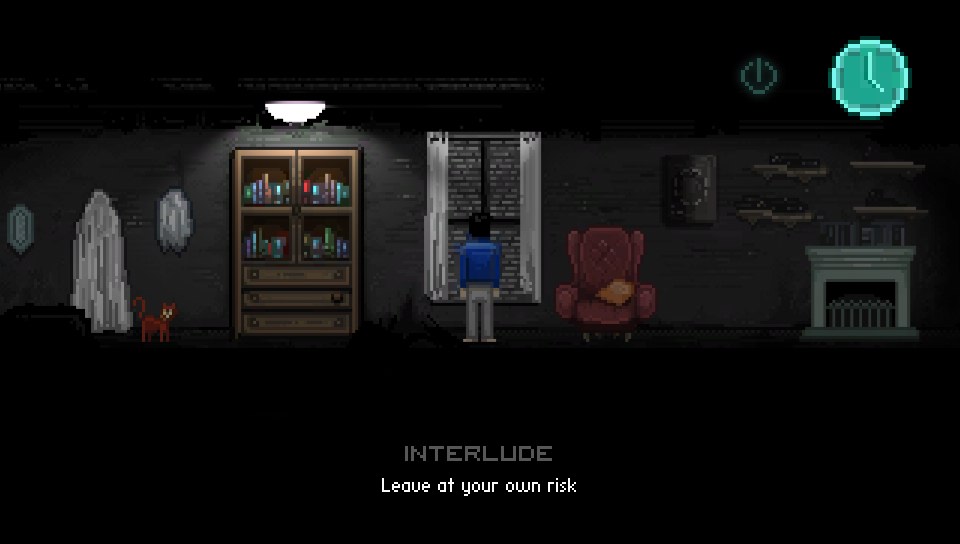 Although the game looks like your standard 2D pixel art indie survival game, you have no direct control over Quinn’s actions beyond making some choices for him.  He’ll describe his setting and any choices there are to make but you’re the one who picks them and then you’ll see the consequences play out.  As long as that choice doesn’t kill him, Quinn will come back to the computer to let you know how he got on.

Initially the story has a film like quality, mixing the isolation and danger of Saw with the basic premise of Cellular and the initial fear and confusion of Quinn feels pretty real.  Eventually though Quinn starts to open up about his insecurities and the game starts feeling like a Twitter feed with all the scares thrown away and replaced with rambling monologues about feelings of inadequacy.  You may buy into but I’m from an age before Twitter and so most of my decisions focused on getting Quinn moving rather than making him feel better. 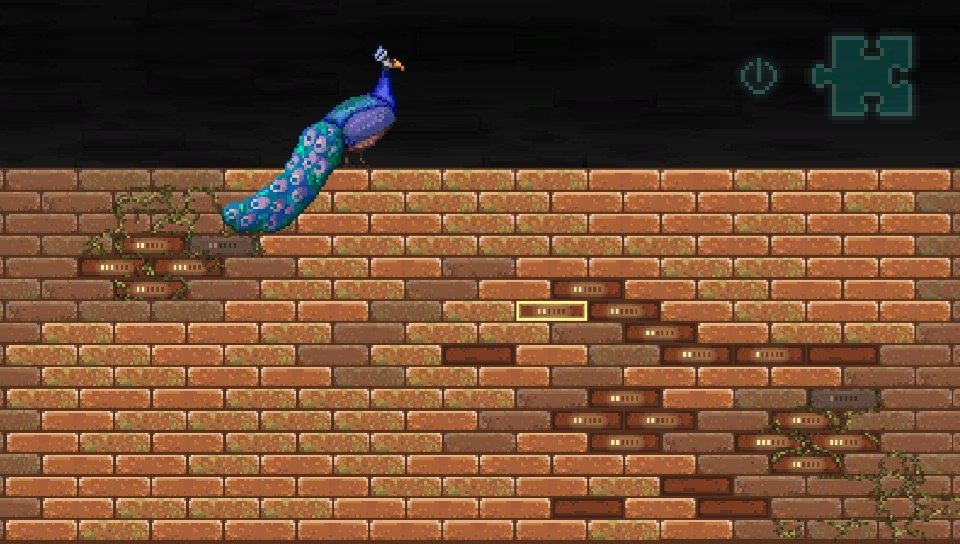 With that said, I did genuinely want Quinn to succeed and this is where the game’s best idea comes into play.  The idea is that Quinn is in the game the whole time.  So if you’re playing and turn off to go to work, watch a film or have something to eat then Quinn is alone and his mental welfare, indicated by four balls of liquid on the left of the screen, starts to suffer.  As such I ended up completing the game in a period of less than 24 hours with maybe five or six hours of actual gameplay.  Here’s the thing though:  the game only ever registered that I was away for a total of twelve minutes.  On the Vita, the system simply doesn’t work.  I slept, watched the film Hatchet 2 and ate.

Most of the game was completed yesterday, which was a Saturday, and I did still feel a sense of anxiety towards Quinn’s predicament, even if his whining monologues started to grate.  This was even more of a problem thanks to Stay‘s two main gameplay elements.  The first is the decision-making.  Early on you are faced with a choice.  Look through a keyhole (something you never do in a horror movie, a thought that is echoed by Quinn himself) or break down the already fire-damaged door.  I chose to break down the door, which worked.  Until it fell on Quinn, killing him instantly.  Back to the start of the chapter with more text to read through.  The game pulls that bullshit on you often and even seems to point you at one specific, and innocuous-looking, choice only to have it kill you in the most random ways.  This is particularly awful on Chapter 23. 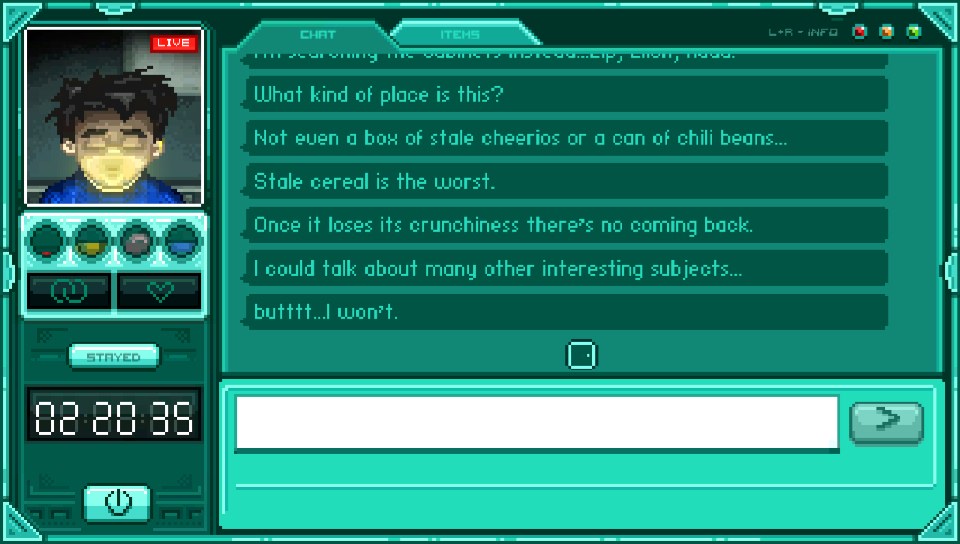 Quinn comes across various puzzles during the game’s 24 chapters.  These puzzles using involve dragging, rotating and dropping pieces somewhere or figuring out how to activate something however the logic involved is often baffling with two or three puzzles eventually leading to me fucking the whole thing off and looking for a walkthrough on YouTube.  The wall puzzle was particularly bad.  Something that the rest of the internet seems to agree with me about.  And the less said about the fucking map puzzle, the better.

I eventually reached the game’s conclusion though.  It wasn’t particularly satisfying as far as storytelling goes but I was relieved to be done with the game, especially with our review backlog being ridiculous at the moment.  However, in reflection I did enjoy the game more than I expected.  It feels more like a visual novel, especially thanks to it’s multiple branching endings that I will never bother with, and that’s not a genre that I personally ever play so this was a new experience and I’m sure it will be for many other players.  The game has a fair bit of heart and soul to it as well which does count for something. 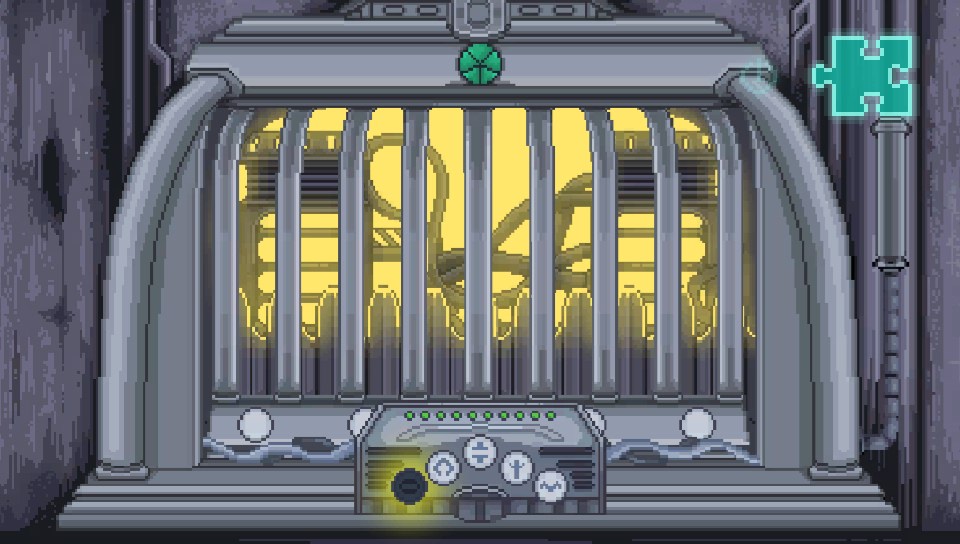 Stay does let itself down in a couple of other ways though.  Firstly, for all of its talk of accepting mental health issues, it analyses the choices that players make and puts them on a stats screen complete with a pithy comment that can come across as needlessly sneering which is really at odds with the game’s message (and these comments are often cut off with no way to scroll them down which suggests this port wasn’t handled with a lot of care) and the cartoony design of Quinn doesn’t really suit the grim setting of the game.  A few little technical issues also appear such as the fact that the loading screen doesn’t usually tell you when it is done, something that a basic playtest would have caught early on.

In the end, most of Stay‘s story is worth seeing and the originality of the premise definitely deserves praise but the puzzles and pacing of the game really let it down and mean that the game doesn’t really do justice to the idea.  We want to like the game more than we do but we probably like it more than it deserves.

Stay
5 Overall
Pros
+ Great premise
+ Some good puzzles
+ Does foster emotional attachment
+ Chapters are short
Cons
- Some terrible puzzles
- Won't suit people who place survival above emotions
- Another pixel art game about feelings
- Random deaths are unfair
Summary
Stay takes an interesting idea and does some good things with it but there's not a lot of gameplay here and what's there can sometimes be awful which means that this game is a very mixed bag. Some of you will love it, some of you will hate it.