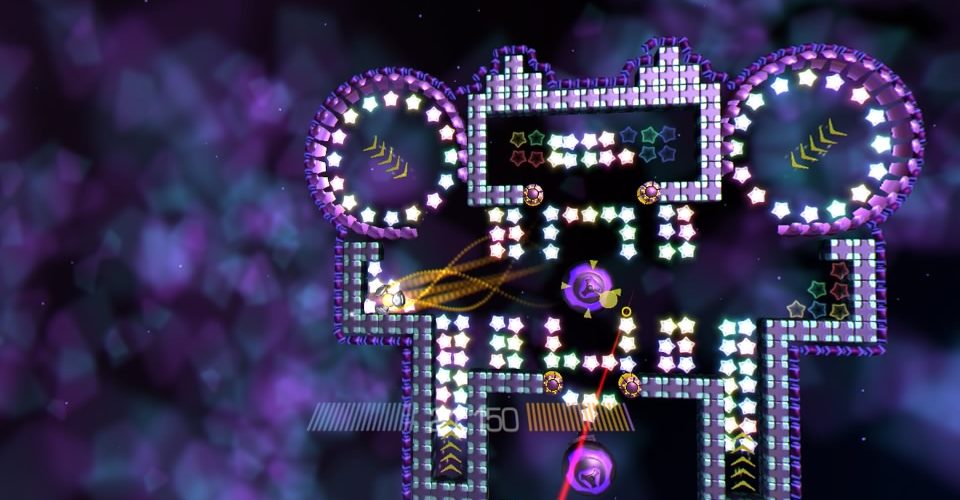 As a slightly forgetful lover of arcade games and the PS Vita, StarDrone is a game that I often notice sat deep in my Vita library and think ‘ooh, is that a shoot ’em up’ before realising it’s not and forgetting all about it again. It was released in 2012 on PS3 and the Vita to fairly middling reviews.  So, it’s quite odd that the game has suddenly been given another lease of life on PSVR. But here it is, almost six years later, ready to be pumped directly into your visual cortex.

The game is a weird mixture of genres. Primarily it’s a puzzler though and the general gameplay loop is that you control a small drone that is seen from above on a 2D plane ( albeit with 3D virtual reality visuals) by pointing it in a direction and letting it go.  You don’t need to worry about speed as your drone will keep moving until something gets in its way. 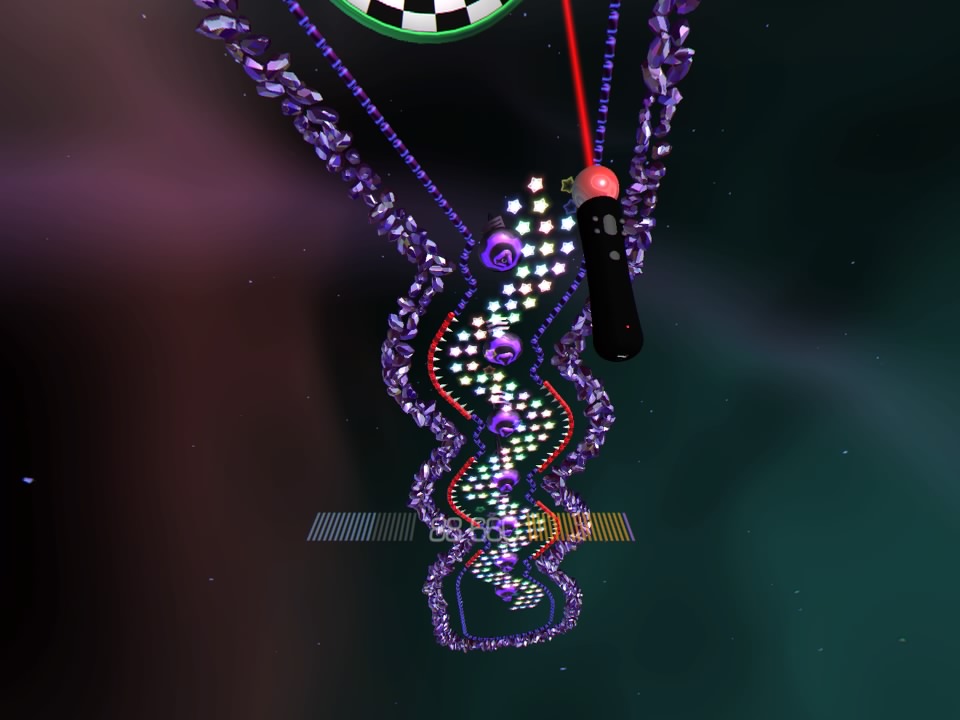 You want the drone to hit as many stars as possible and so you’ll need to judge that with your initial shot (which is controlled by pointing with your Move controller). After that the only way to influence the drone is by tethering onto nearby gravity points that will pull the drone into an arc at which point you can release it and watch it fly off in a new direction.  The constant motion of the drone adds an element of danger as you can’t really afford to lose concentration or else your run will be easily ruined.

Other levels use the same controls but will require you to get all of the stars, rating you on the time spent or will see you trying to take out enemies using the environment. Whatever the level though there is a three medal rating system which encourages some replayability and also helps unlock later levels. 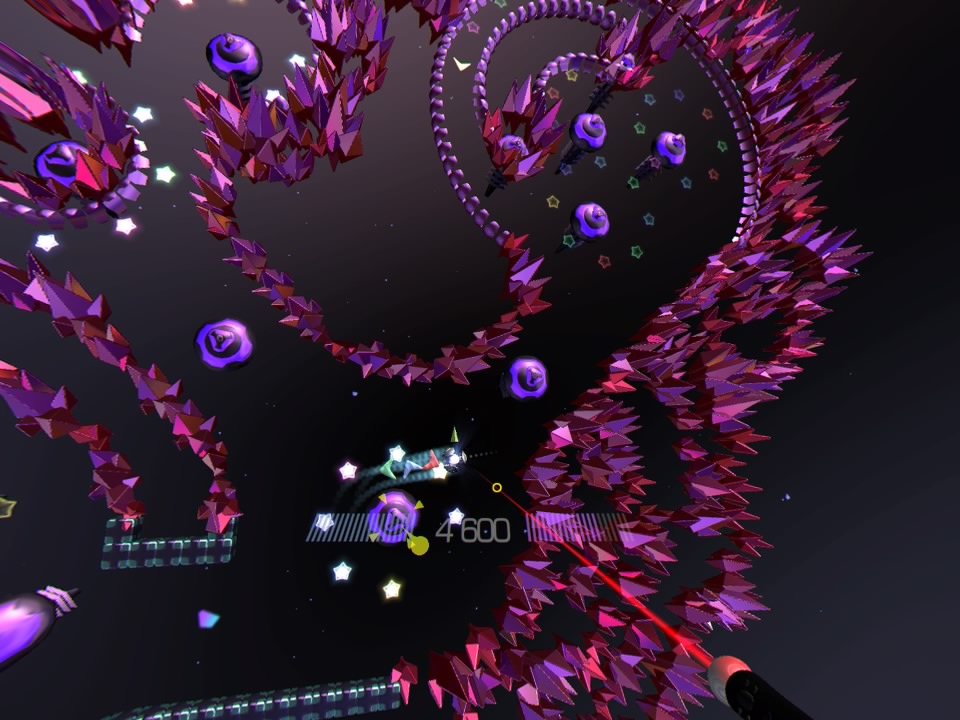 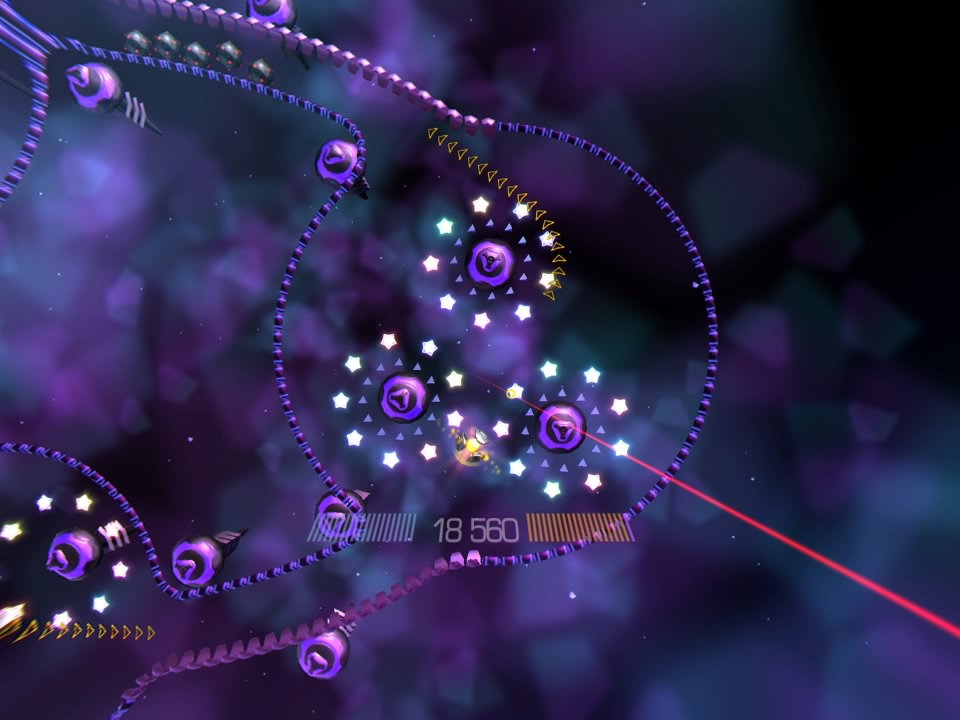 Initially it all seems quite nice. The puzzle element works well but you also get the arcade hit of a Breakout-style game, mixed with some pinball and even a little racing/time-trial as well. As you progress through the game’s sixty stages, the levels get a lot more intricate and this is where it may start to alienate some players.  The simpler the level, the more intriguing it is to figure out how to squeeze out the points that will get you the gold medal.  Start adding in numerous tether points and it all starts to feel a little bit too complex for what is essentially quite a simplistic game concept.

Some people will like the complexity of these levels but when you’re trying to control your drone with pixel perfect movements, the Move control scheme can make it a little bit imprecise. On levels where you have to control your movement arc multiple times it’s far too easy to release your drone a tiny bit too early or late and those erroneous degrees of movement can be the difference between a gold medal time and an attempt so bad, you’ll abort it. 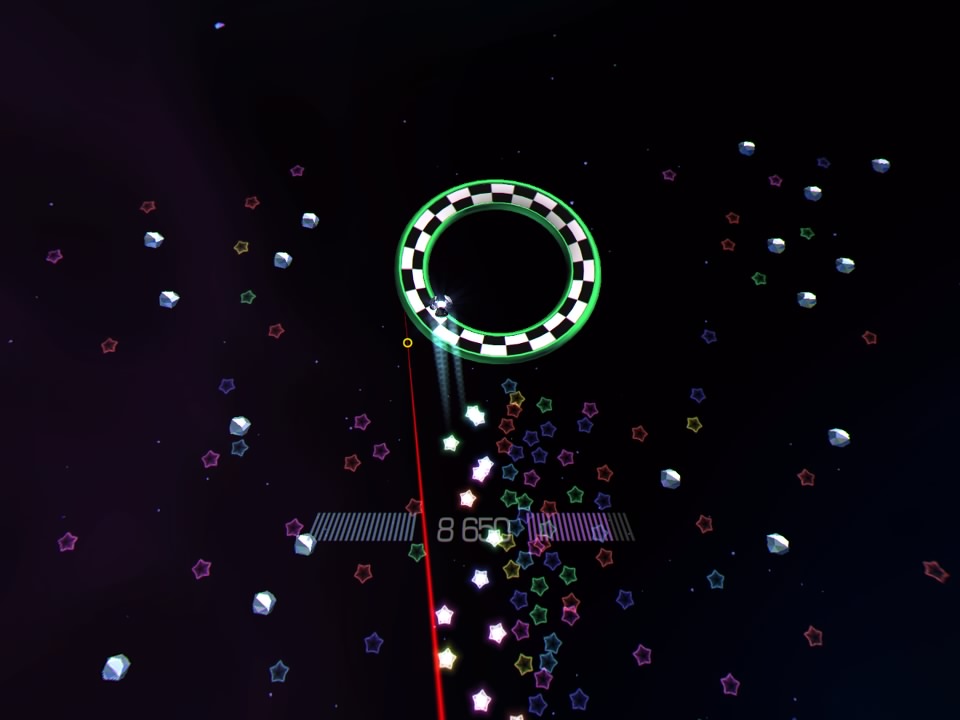 That said, each level is short and the game does have an addictive quality as you try to master levels you’ve already beaten and also there is a pick up and play quality to it.  However, that suited the Vita way more than it does the PSVR.

Speaking of PSVR, the game’s use of it is a little bit unnecessary. The gameplay is the same as the PS3 and Vita version but now the levels look bigger as they are in front of you in VR. You’ll need to look up, down, left and right to take it all in and it’s okay but doesn’t really add anything. Although it does make aiming at the gravity points a little easier I guess.

Remaking a game from 2012 in VR doesn’t make it a modern classic but as a way of wiling away a few hours, StarDrone is pretty good. It won’t wow your friends or keep you playing until your retinas fall out but it is a competent little puzzler that won’t break the bank.

Summary
StarDrone offers some competent puzzle action on the cheap but never really feels at home on PSVR.