From Solar Sail Games comes Smoke and Sacrifice to PS4. Classed as a survival RPG by the developer, what you’re actually getting is a game that revolves around crafting and where every item has a limited life span or durability. 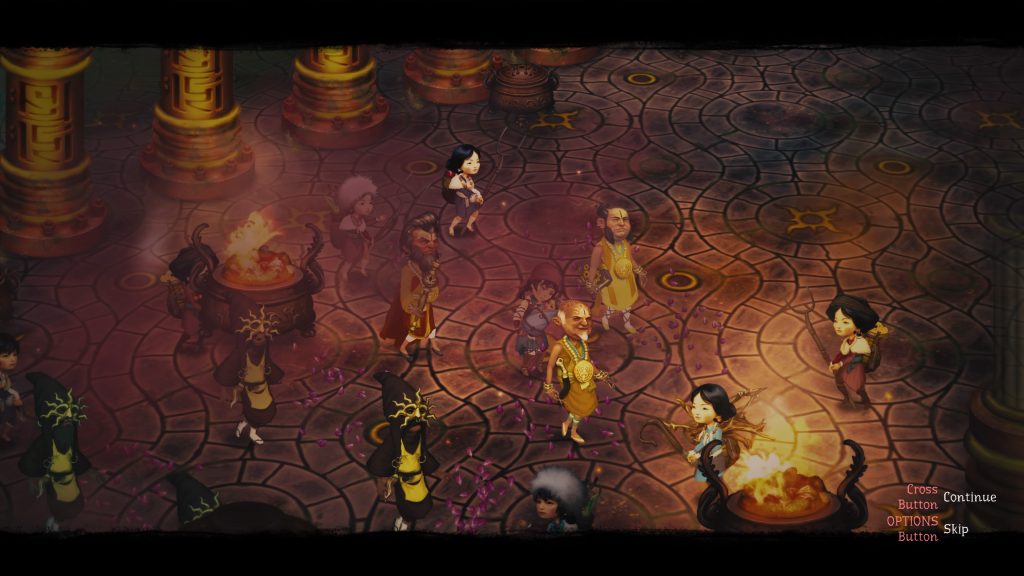 You play as Sachi, a mother whose first born has been chosen as the sacrifice to the Sun Tree which keeps the cold and dark at bay. Stricken with grief, eight years later she follows her son through the teleporter to an unknown world where she must learn to survive the environment, creatures and a strange smoke that engulfs the land over night in order to find out what happened to her son.

The gameplay is viewed from above and although all but the ground assets are 2D you’re free to move around as you please. You have an attack and the ability to hop away from foes but any other advantage you must make from scratch with materials you find. You start in a wooded area which gives you the materials required to make a simple weapon and a short lived lamp to clear a path through the smoke, but more importantly you can make some snow shoes that’ll let you progress through the icy wastes which house different resources.

You’ll meet some NPCs who will offer rewards, either progressing the story or giving crafting recipes, for helping them and so the gameplay loop continues. You can move on grass and snow but now an electrified floor blocks your path. Better continue exploring or completing quests for people until you can make some rubber shoes to pass. Now there’s a fire floor. Obviously as you play you’re unlocking other recipes as well (you can’t craft without a recipe) so you’ll get better armour or weapons and unlock food recipes which will give stat bonuses (food is only for replenishing health, you don’t need to eat to survive) but I can’t say there’s ever a game changer. 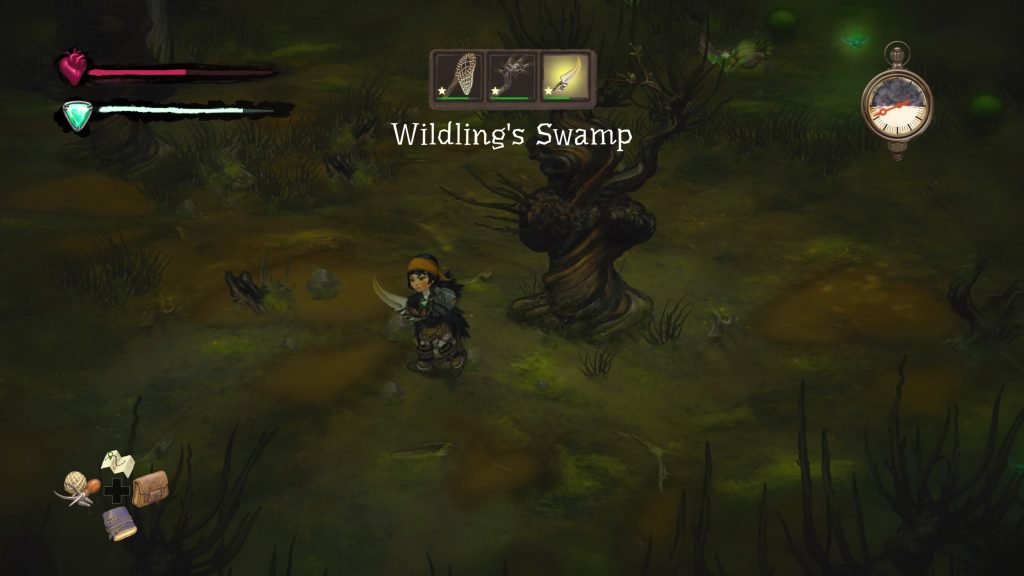 You don’t get to craft anything that automates any resource gathering and you’re always stuck with the same inventory, which starts at a decent size but will quickly fill up with the items you require to explore and then all the materials you collect. Chests you find and unlock can be used to store items but these are limited in space too so you end up with collections of items spread out over the map. You unlock teleporters as you explore making it quite easy to get around but it’s still a major inconvenience.

There are certain things you’ll definitely want to store too as as I mentioned in the first paragraph, items expire. Mostly fruit, veg or body parts have a life bar that will drain as you carry them on your person. Using them to craft something or storing them in a chest is the only way to ensure they aren’t wasted. Similarly weapons and armour will degrade with use rather quickly. Luckily they can be repaired using far fewer materials than you crafted them with but it makes avoiding combat a far better strategy unless you’re looking to collect a specific material from an enemy. 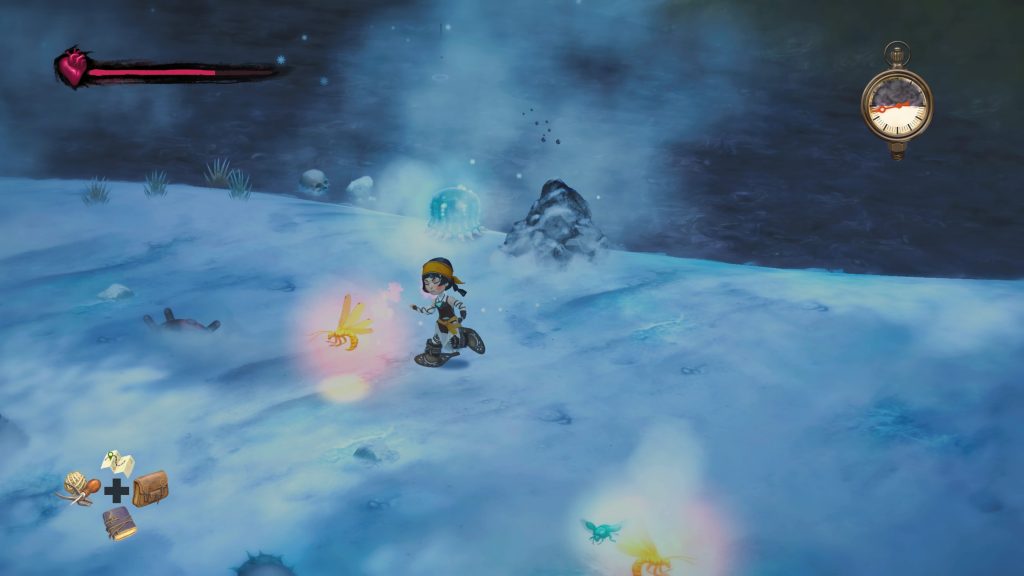 Which isn’t necessarily a bad thing as the combat is quite poor. You just tap the attack button over and over until something dies, sometimes jumping away when the enemy goes to attack. The 2D sprites in a 3D space can make lining up attacks or dodging effectively quite difficult, though the overall game isn’t too harsh as long as you have some health replenishing items on you at all times. If you save regularly then you’ll rarely lose too much progress.

The story promises much but rarely surprises when it interrupts the constant exploring and crafting and although the graphics are well drawn for the characters the environments are repetitive and lack unique features. It makes Smoke and Sacrifice a game that is just enjoyable enough to play through with the weak combat, absence of exciting upgrades and some other irritating quirks (electrical attacks making you drop a random item, but the game not doesn’t make it very clear. I lost some important items that way) killing any replayability it might have had. 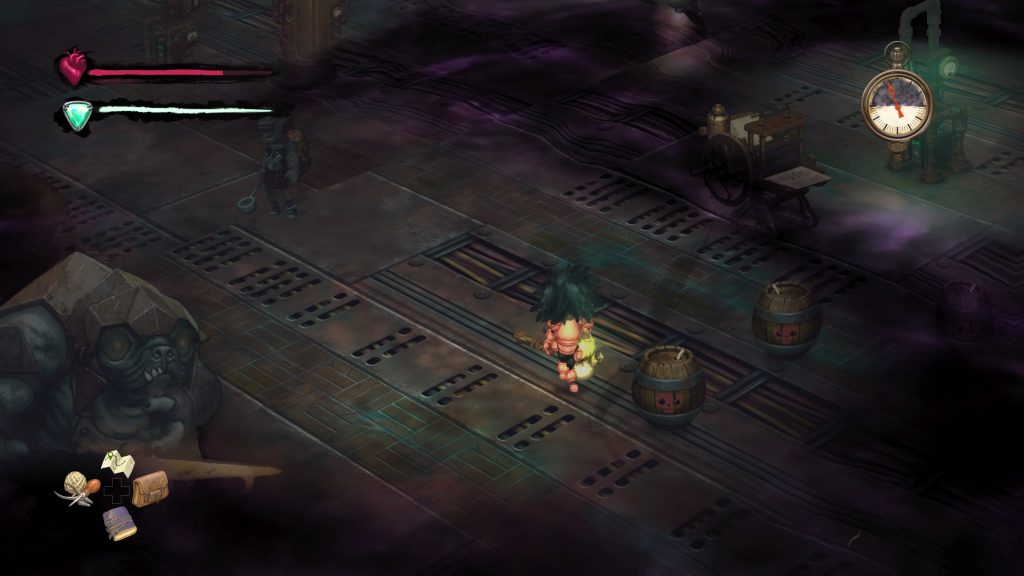 If you’re a fan of crafting in games and item durability isn’t a turn off then you can probably have some fun with Smoke and Sacrifice for a few days until you reach the story’s climax. It doesn’t do enough to make it a must play and won’t win any new fans to the genre but those that aren’t opposed to a little material grinding will probably get some enjoyment out of it.

Smoke and Sacrifice
6 Overall
Pros
+ Character art is nice
+ Story is okay
+ Plenty of items to craft
Cons
- Combat is weak
- Never any game changing items
- Some irritating design decisions
Summary
Smoke and Sacrifice does just enough with its exploration and crafting to be enjoyable. The weak combat and some irritating design decisions make the replayability suffer but fans of the genre will enjoy following the story through once.