Skate City is, as you can probably guess, a skating game which comes to us from Canadian mobile game specialists Snowman.  Originally released as an Apple Arcade exclusive in 2019, it is a 2D skating game that has some initial similarities with OlliOlli.  We love Roll7’s iconic games and so we had high hopes for Skate City.

There’s no plot to worry about here.  To be fair, skating games never got past the ‘we need to raise money, let’s make a skating video’ scenario anyway.  Instead, Skate City drops you into the first of its three locations, Los Angeles, and uses its first few levels to explain the controls.  The game uses an analog-heavy approach.  Think SKATE as opposed to Tony Hawk.  Here you do all of your tricks using the left or right sticks while the shoulder buttons control spins and the triggers are used for manuals and for balancing out grinds.  You press X to push forward. 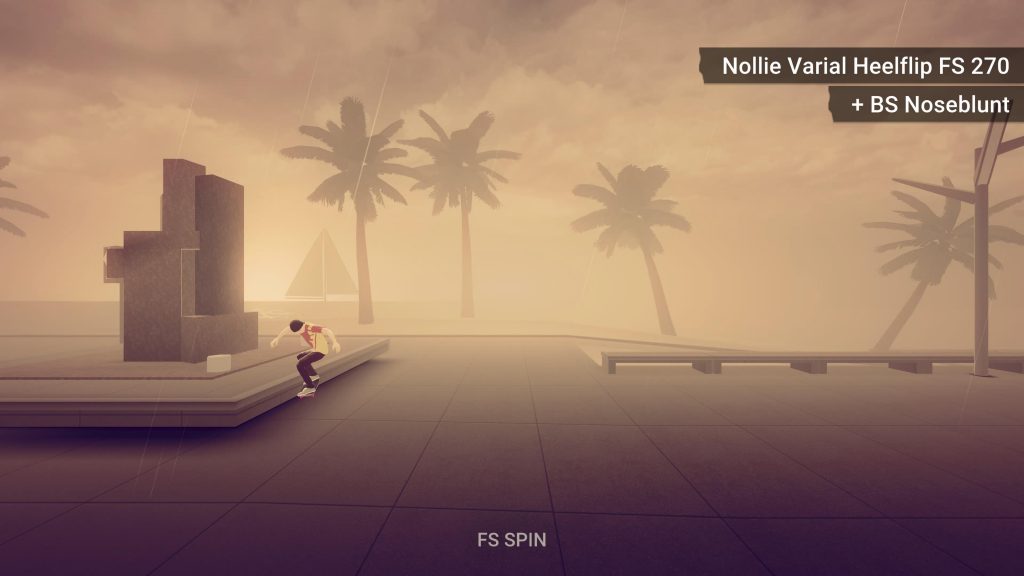 Each city is broken down into 21 ‘challenges’ which act as the levels.  Here you’ll get a short amount of time to complete a task.  This can range from simply getting a target score, nailing tricks that are called out, comboing grinds and manuals or races.  They can be pretty inconsistent in terms of their difficulty but for the most part they’re okay.  Each challenge has a three star rating too which gives you plenty of reasons to play them over and over.

On the street, the controls do take a lot of getting used to.  Ollie based tricks use the left stick while nollie tricks use the right stick.  You just push these in a direction and that’ll give you specific flip trick.  Do that near a grindable surface (a bench, rail or planter) and you’ll go into a grind.  You can flip out of a grind with any trick or just press X (or O) to exit it.  Between tricks you need to pump your speed up for momentum too.  There’s no Tony Hawk grind acceleration here.  Oddly the combo system is limited to a 4x multiplier which seems like an unnecessary choice but it does keep the overall difficulty in check rather than expecting you to pull off insane 20x combos like OlliOlli does. 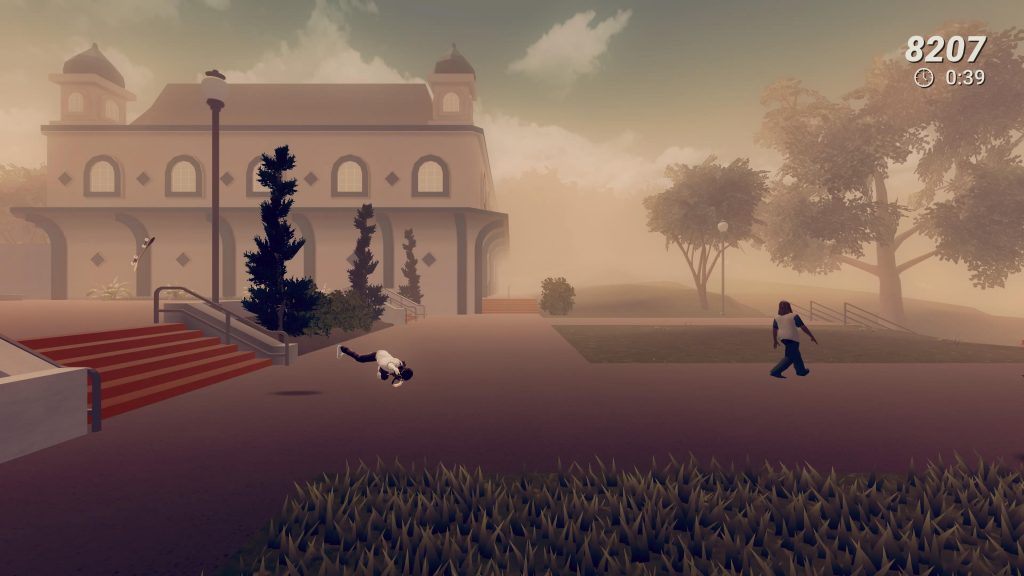 There isn’t much else to say about the gameplay itself.  It’s a simple enough system to understand and the difficulty comes from being consistent rather than it asking you to juggle any particularly difficult tricks.  Most of the difficulty comes from the slightly tricky control set up.  We’d much rather that all tricks were on one stick as that’s a lot more intuitive and the lack of speed you have does make it all feel a bit stilted initially but this isn’t a criticism as such.  The game has its own control system.  It’s not trying to copy SKATE or Tony Hawk and so you’ll need to reprogram your brain and muscle memory a little.  It can be a struggle but progress is easy enough to make, even if some of those three star ratings will be harder to come by.

The comparison to OlliOlli isn’t in Skate City‘s favour though.  That game was a lot more intuitive and familiar in terms of its controls and it was faster and more flowing.  Skate City feels more realistic though, giving you the resistance of skating and physics rather than letting you pretend you’re a superman.   Also, OlliOlli had a tendency to get punishingly difficult which this game refrains from. 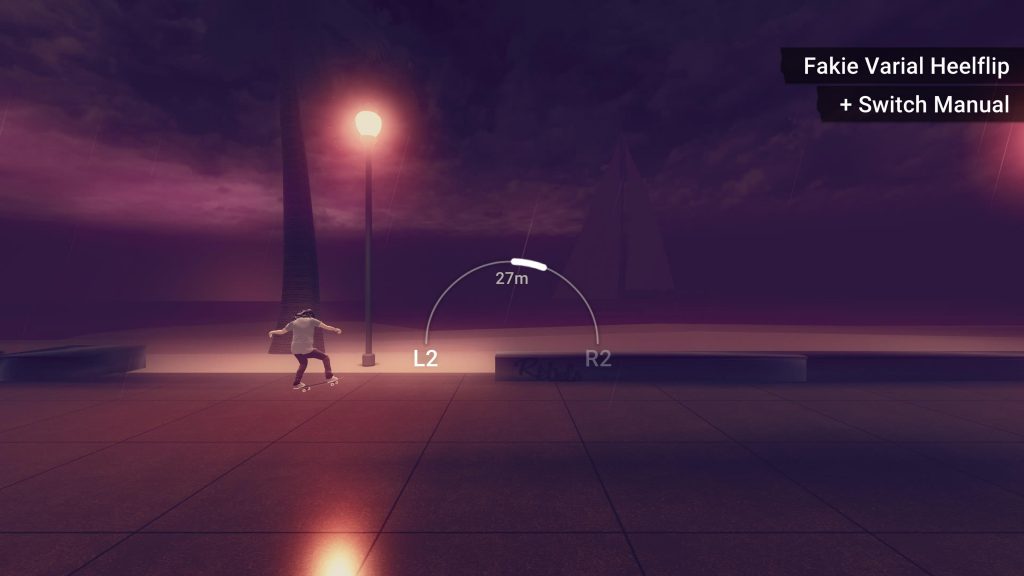 Beating challenges will earn you ‘SC’ which is the in-game currency here.  This is used to unlock the other two cities as well as stat upgrades (for speed, ‘pop,’ balance and spins) and a range of customisations which let you change your clothing and skate gear.  There’s not a huge selection of looks available but it was nice to dabble.  So really, this is quite a simple game in terms of its structure.  That’s no surprise given Skate City‘s mobile roots.  But it’s reasonably addictive and gives you a reason to keep playing.

The presentation combines a soft, minimalist 2.5D look with a selection of lo-fi beats.  It’s a million miles away from the Thrasher/Skate or Die vibe of the Tony Hawk series.  Each city kind of looks the same though and there’s not much in the way of detail.  You’d think that Barcelona would look suitably different to Oslo but it seems as though most of the game is either set in a park, subway or very empty street.  The minimalist feel gives the game a ghostly emptiness making skating feel like an lonely pursuit. 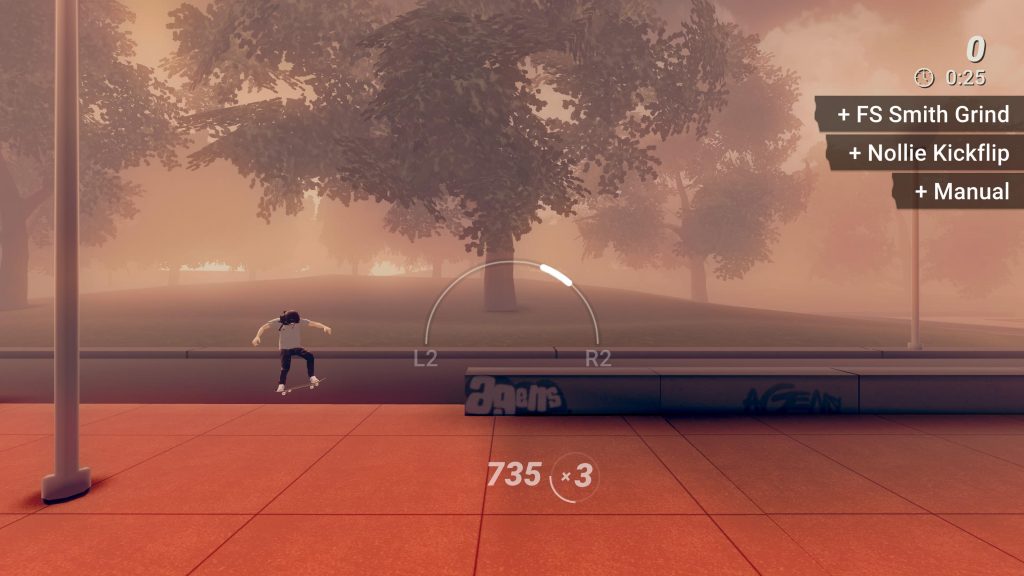 There’s nothing groundbreaking here and the game lacks the instant impact and appeal of other skating games but if you approach Skate City as having its own pace and feel, it isn’t an unenjoyable game.  It’s just not bringing anything new to the genre nor is it really improving anything.   While we didn’t dislike anything it did, the game didn’t drag us back in.  The devs recommend shorter sessions played on several days but we remember sinking countless hours into SKATE and Tony Hawk and that was because they were so addictive.  We’ll keep chipping away at Skate City but early on it was apparent that the game didn’t have much to show us that we didn’t see in the first ten minutes.

As such it’s not a game that we hugely recommend but as long as you know what you’re getting into, it isn’t one that we’d warn anyone against either.  For a tenner (or 12.99 in Euros), this isn’t a rip off and has just about enough content to give you enough value for money but if you’re a bit skating game fan looking for the next great game to get stuck into, this might not give you what you’re after.

Cons
- Beyond the minimalistic vibe, the game lacks atmosphere and character
- Quite repetitive despite the various challenge types
- Controls might feel a bit clumsy and awkward to some at first
Summary
Skate City is alright. There are better skating games out there for sure but if you're looking for a mellow take on the genre, this'll do for a while.